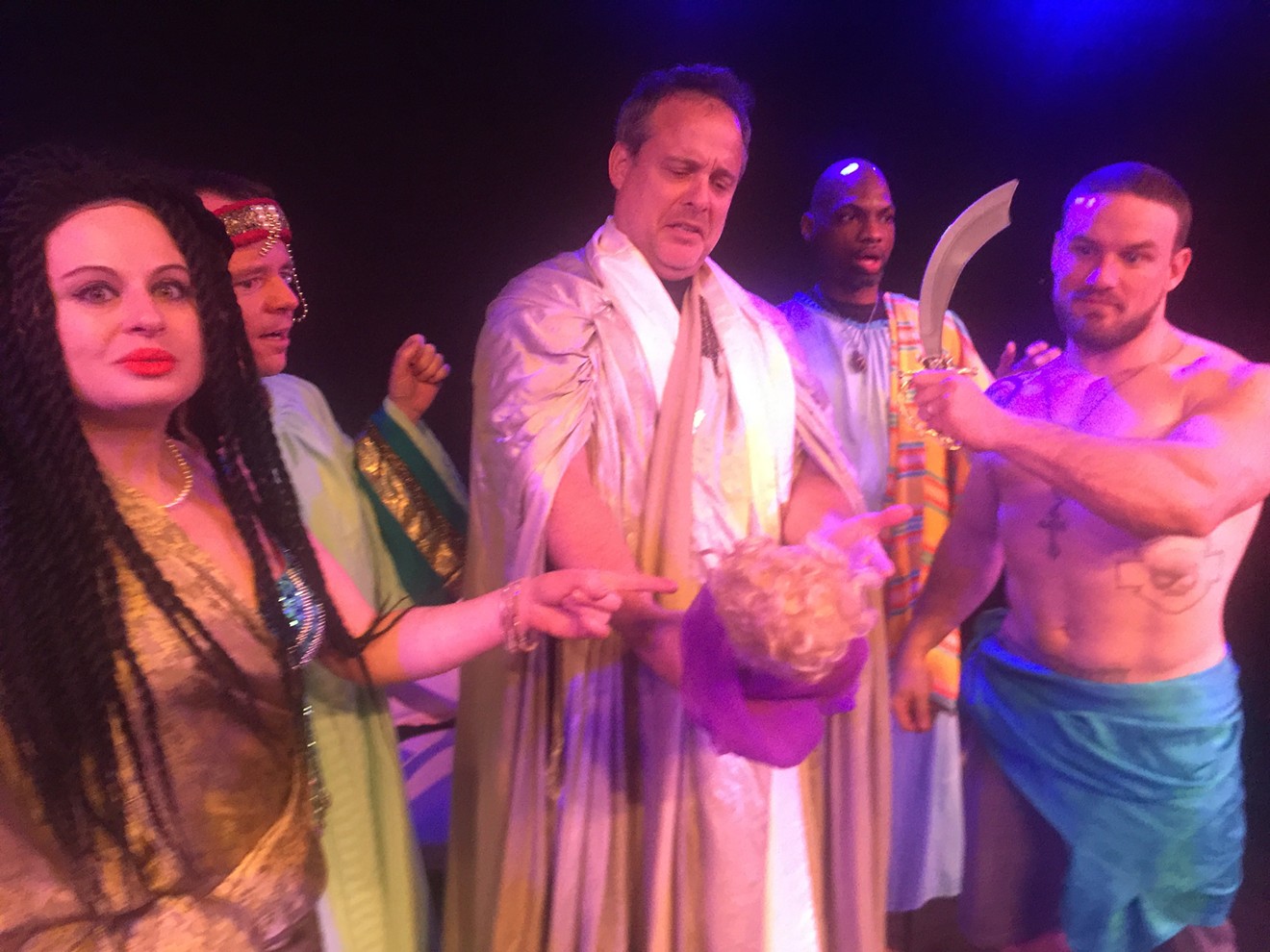 Sheba Mason (left) stars in 700 Wives at Empire Stage. Mike Dinwiddie
The politically incorrect comedian Jackie Mason can rest easy knowing there is no mention of him in ex-lover Ginger Reiter’s upcoming comedy musical 700 Wives. Reiter took a break from poking fun at her ten-year love affair with her baby daddy, whom she razzed in Both Sides of a Famous Love Affair: The Jackie Mason Musical and its previous incarnations, 702 Punchlines and Pregnant and Oh, Jackie, Oh.

In 700 Wives, which runs February 15 through March 11 at Empire Stage in Fort Lauderdale, Reiter puts a comedic spin on the biblical tale of King Solomon and his notorious horn-doggery. She says she wrote the show because she thought biblical musicals are often a bit on the serious side and wanted to inject some laughs into the format.

That’s not to say there aren’t similarities between Solomon, played by David R. Gordon, and Reiter’s famous ex, whom younger readers might know as the voice of Krusty the Clown’s dad on The Simpsons.

“Solomon had 700 wives,” says Reiter, a Boca Raton resident and former teacher, “and Jackie had at least 700 women in his life.”

Reiter doesn’t appear in 700 Wives, but the daughter she had with Mason in 1985 has a part. Sheba Mason plays the queen of, well, Sheba, who disrupts Solomon’s love shack in Jerusalem when she visits. In Both Sides of a Famous Love Affair, Sheba, a comedian and alum of Olympic Heights Community High School in Boca Raton, played her mother.

Mason has long denied Sheba is his child. He told Page Six last year: “She’s not my daughter. The doctor said it’s a lot of baloney.” The Florida Court of Appeals says different; it ruled in 1990 that Mason had to pony up $2,000 per month in child support.

Despite the three-year paternity suit and a libel lawsuit over Oh, Jackie, Oh that was dismissed, Reiter still looks back fondly on their courtship. She met the now-86-year-old Mason at the now-shuttered Rascal House deli in Sunny Isles Beach in 1977 and, with some encouragement from her excited mom, reluctantly agreed to go on a date with the Broadway star. That apprehension didn’t last long. Reiter says, “After an hour of being with him, I fell madly in love. He was in his late 40s, but it didn’t matter. He was just so funny.”

These days, the 66-year-old dedicates herself to writing and composing musicals, such as Mel Schwartz Sleeps With Mae West. Sheba is a standup comedian who — get this — lives a few blocks away from Mason in New York. She said she and her father have run into each other at least ten times but have acknowledged each other only on two or three occasions, including the time he scolded her for ragging on his looks in Both Sides of a Famous Love Affair.

Does Sheba think this Maury Povich-worthy story will have a happy ending? “I had a lot of hope,” says the 32-year-old, who will perform standup March 6 at Empire Stage. “But I’m a little doubtful.” She said she sometimes takes a detour to or from her apartment simply to avoid her old man. On the other hand, a part of her is relieved to see him out and about.

“Even though he’s not my friend, it still makes me happy that he’s alive and well and capable of going out to eat,” Sheba says. “People in their 80s can’t always do that.”