Best Alternative to a Strip Bar 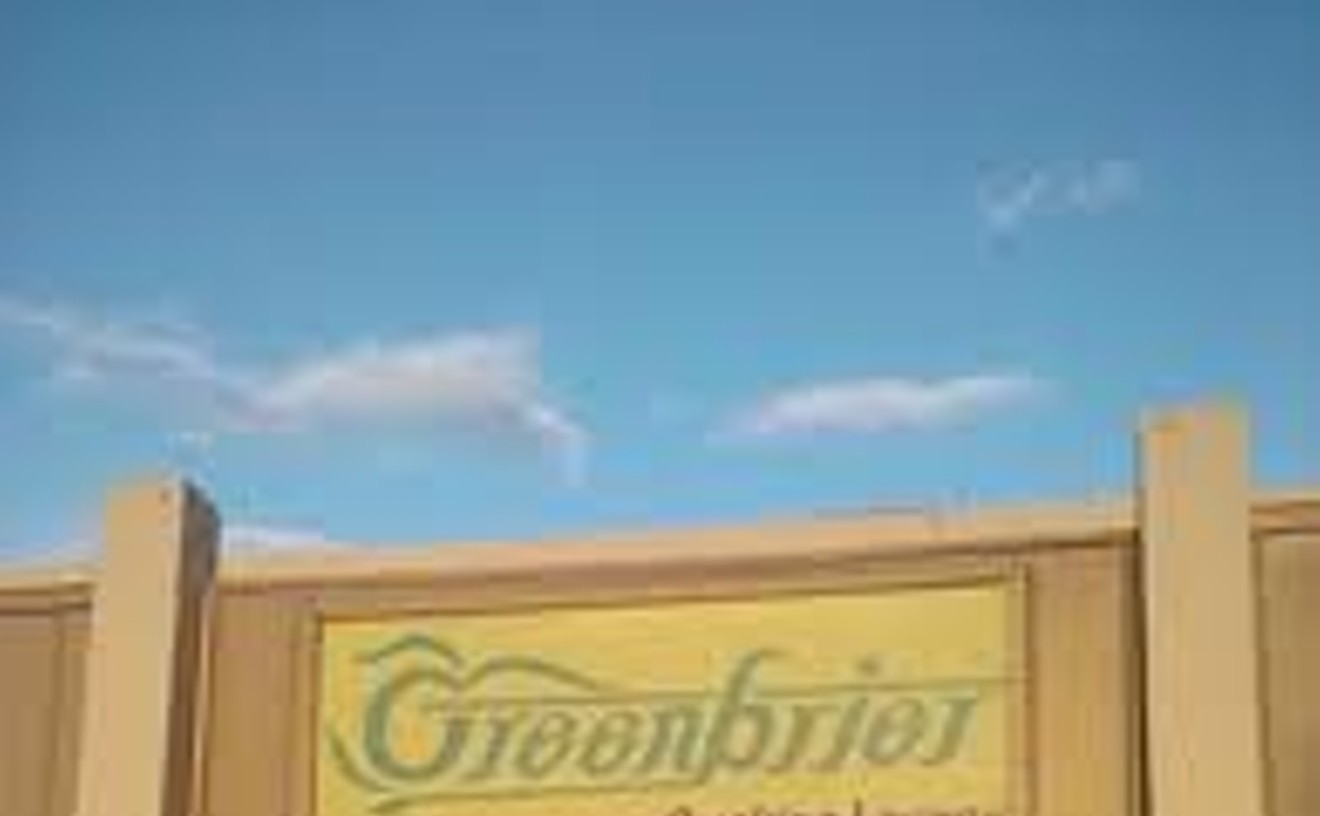 Promised the ol' Battle Ax that you wouldn't go to the strip bar tonight? Well, if you're a man of your word and you have a hankerin' to be around scantily clad women, that could be a problem. Happily, Greenbrier has got you covered. On many nights, admittedly, standards have to be set a little low -- Greenbrier seems to be the sort of place where old strippers go to fade away. The lights in the place are kept fairly dim, though, so just don't wear your contacts or glasses and you should be fine. Besides, one cannot say the same thing for everyone working there -- a few of the ladies in residence could give many strippers a run for their hard-earned money in the looks department. Plus, you'll be able to report that you did not, in fact, go to a strip bar when you stumble home in the wee hours. While the bartenders and waitresses at Greenbrier are dressed in as little as possible, none of them strips down to nothing, and a lap dance is nowhere to be found. Your conscience is clear, my friend.

Best Place to Get Flogged

Bitch-slapping's for sissies. Strap yourself into the dungeon-like slave pen, bend over, and let the flogging begin. Playing with the crosses and cage-like contraptions brings a whole new meaning to "going medieval." At the Fetish Box and the London Ballroom's monthly fetish romp, latex, leather, rubber, glam, and goth are among the few rules, not the exception -- you can't get in without sporting the garb (or at least an all-black outfit). The debaucherous playground is rife with industrial, electronic body music, and future pop beats spun by Dino, Ruiner, Falstaff, and Tommy Gunn. Fetish pinup diva and Playboy cover girl Dita Von Teese has headlined the club night, with her tease-to-please burlesque show. And where else might you have seen her perform this while cradled in a life-size martini glass? It just may leave your sore-assed self saying, "Thank you, sir. May I have another?"

An open area at the Mother's Pub becomes a launch pad each week for creative hip-hop music-making. A middle-age guy wails on a harmonica and guitar, to the rapping of an MC, who's rhyming to scratching and cuts of a turntablist. Jams like these can be found at "For Those Who Listen," a grassroots open-mic showcase of lyricism, poetry, and MC and DJ battles. Among the throng of hip-hop lyricists who come to square off, a guy challenges another, and they step up to shoot rhymes back and forth in a showdown. The night was created by members of the Fader Ballistix turntablist band: Immortal, Reakt, K-razor, Spytek, I-emerge, and SPS, and by 7th Direction band members Colossus, Choppa D-vize, Immortal, and Mordechai. The musicians wanted a way to perform, practice, and promote musical expression. Now that word's gotten out, battle lines have been drawn -- at least 25 MCs come in hopes of prime rhyming time to compete in rapping throwdowns. Hip-hop enthusiasts from Orlando to Miami trek to Broward for the musical improv night.

In the Biz Night at the Blue Martini 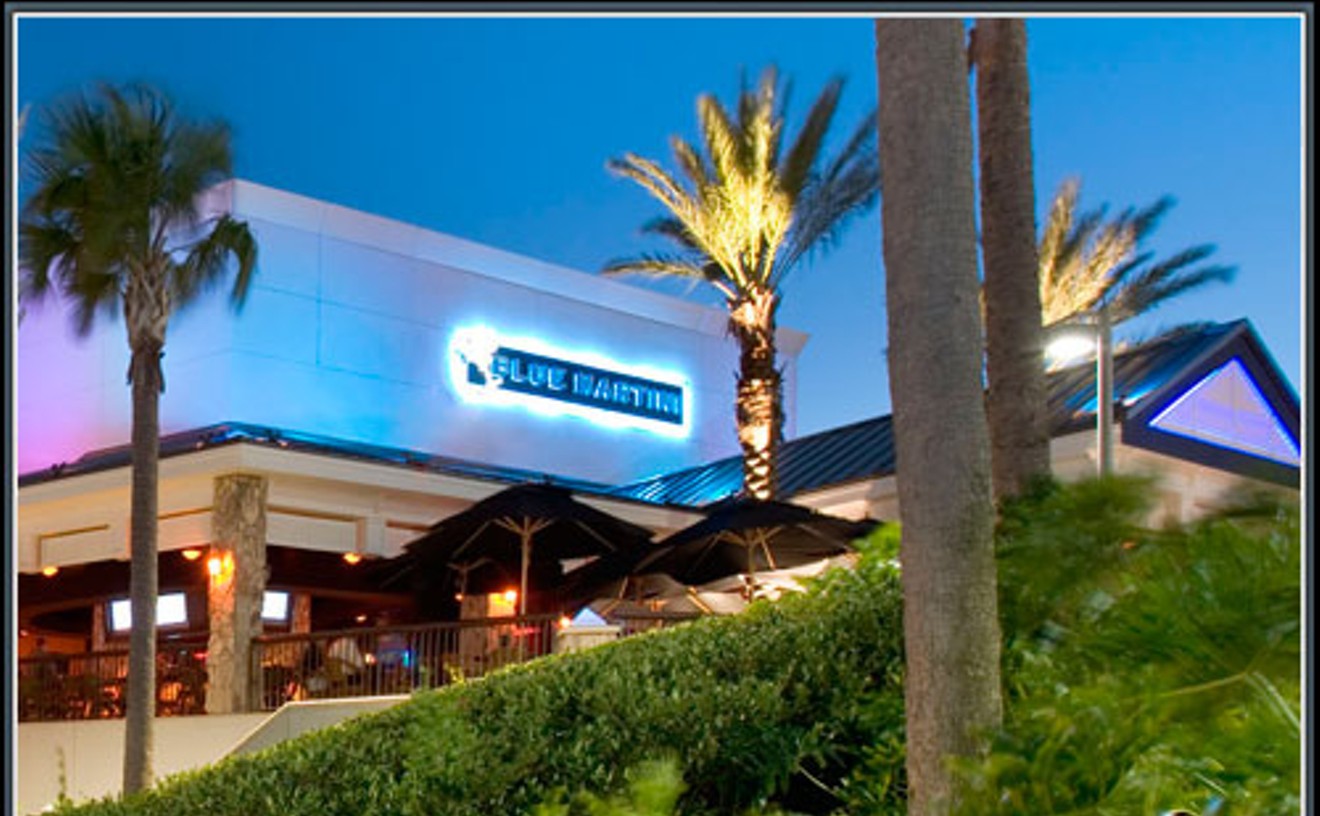 The house, electro, and break beats pulsating from the second floor of CityPlace on Monday nights from 11 p.m. to 3 a.m. are as much in the forefront of urban style as the venue that they're bouncing off. DJ H-Bomb formerly broadcast a live electronica radio show from the defunct Bliss. Now, the techno DJ continues christening local ears with cutting-edge tunes including original works by electro veterans Dynamix II and Scratch D vs. H-Bomb, noted for the Red Pill, and the latest tracks by artists such as breaks producer BLIM, breaks/electro duo Plump DJs, and breaks/big beat duo Crystal Method. Camaraderie runs strong among the hospitality-industry folks at the club night, with H-Bomb, a veteran of the West Palm Beach club circuit, at the helm.

How does she do it? For those who have never experienced a sold-out show at the Culture Room, let us warn you -- air is rare, and you had better be OK with other people's sweat on your nightlife apparel. It gets so packed that negotiating the brief trip from the bathrooms to the bar requires a sherpa and several days of supplies. Well, maybe not that packed. But you get the idea. And yet, there's Sharon behind the bar, unperturbed as a storm of avid drinkers calls for another round. Not only does she serve them all up with a quickness but she somehow manages to take the time to commiserate with a melancholy barfly or two. And she does it all while seeming neither hurried nor stressed. Perhaps there is some sort of time-warping effect around the bar at the Culture Room that allows her to serve 20 drinks in an eyeblink. Or maybe she's just that damn good.

Made-up gals with lip gloss in full display populate the dance floor, which resembles an upscale living room, with draperies, mirrors, and sleek seating. Sexy house music pulsates in the minimalist modern venue. Miniature shade lamps dimly light the black bar in the main room, teeming with clubgoers as if they've been coming here for years. Beautiful people ease into comfortable chatter, keeping the carafes and bottles tipping as they recline on the bed-like seating in the VIP section of the outdoor area. The fashion-savvy crowd of 20-somethings sports designer duds. More are cued up outside, 20 deep sometimes, waiting to cross the velvet rope into the so-South Beach atmospherics, minus the cover charge and the attitude. No Doubt partied at the Delray Beach club after performing last year at Sunfest. Frontwoman Gwen Stefani requested reggae. The club's diverse musical offering each night appeals to even the nonelectronica types with hip-hop, reggae, and retro.

Courtesy of Shooter's Waterfront
Following its sudden takeover of Bootleggers earlier this year, Shooters became the largest bar in that no man's land between Fort Lauderdale Beach and Lauderdale-by-the-Sea. In fact, even when compared to bars in those areas, Shooters is still unmatched in scope. So if bigger truly is better, this is your place. Along with the large seating area and outdoor bar familiar to Shooters clientele of the past, the place now boasts several tiki bars, a pool, a stage for live acts (admittedly, usually less-than-stellar cover bands), and dockside space so that South Florida's boaters can pull up, get tanked, and go cruisin' (Note: Driving a boat under the influence is still Driving Under the Influence. As if that'll stop you.) If you're the type who likes Hawaiian shirts, board shorts, and fruity drinks heavy on the rum content, this is your place.

When a place of business offers you the "Dirty Thursday" promotion, the choice of 30 martinis every Thursday night for four bucks each, it's pretty hard not to respond positively. But when the staff composes beverages like the "startini," made with Absolut and fresh carambola juice, and serves it under a mango or papaya tree that grows on this property's one-acre tropical Taru Gardens, then it's downright impossible to resist the quite thorough seduction. For some years now, we've all known Sundy House as the renovation of the first mayor of Delray's establishment, where the grounds were exceptional but, well, that was about it. Now, thanks to executive chef Johnny Vinczencz and his team, we have a venue in which we can not only dine extensively but drink -- responsibly, of course -- in ways that even our accountants, if not our mothers, would approve. 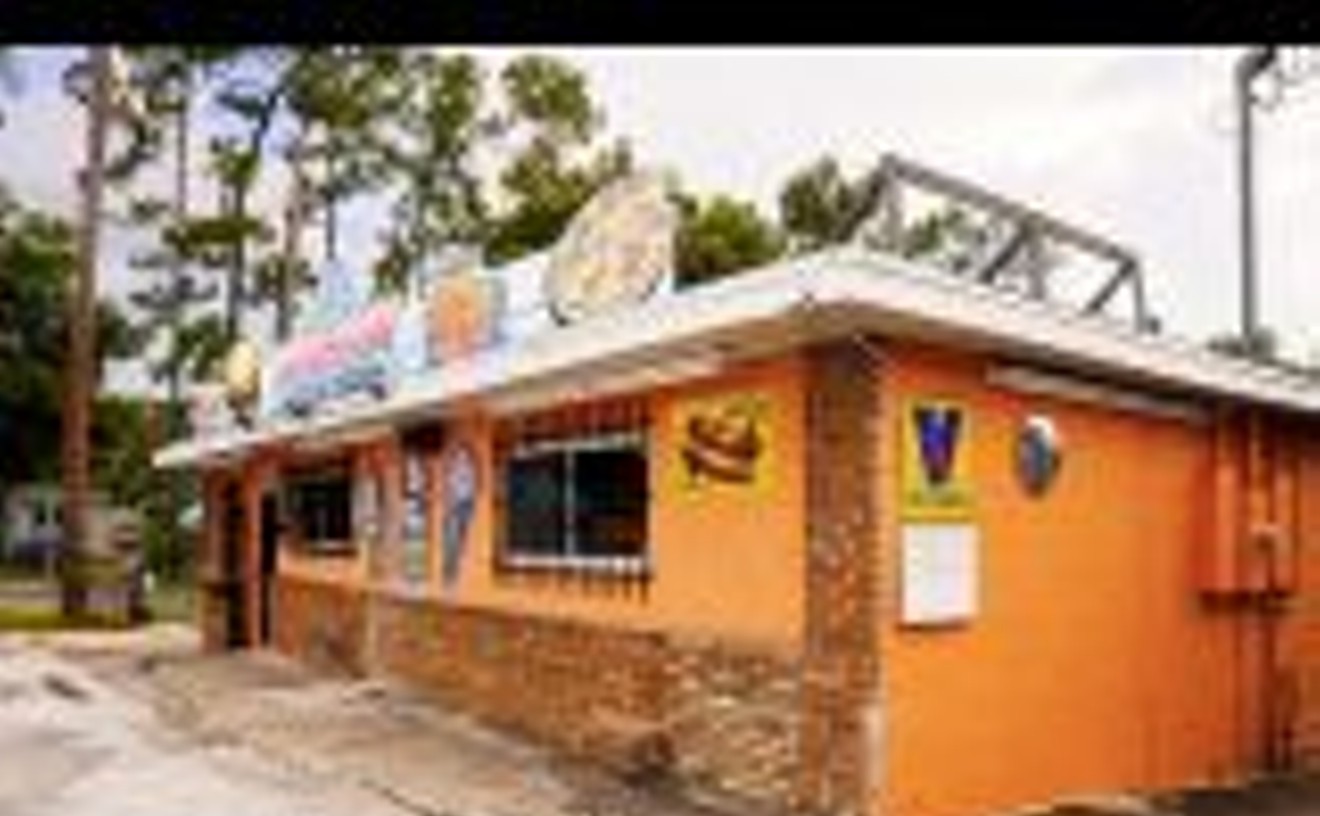 Plush Pony ain't the kind of place to start line dancing. Those cowboys at the L-shaped bar, and yes, they're probably real cowboys, won't appreciate the two-step you learned in dance class. They're more likely to accept a drunken jig on the makeshift dance floor of linoleum tile sandwiched between the pool table and the barstools. Here, it's more about the liquor than it is about do-si-do-ing. The Pony stays open from 7 a.m. until 5 a.m. the next day and has a cowpoke-priced happy hour for its first 12 hours of business with $1 drafts, $1.75 well drinks, and $2 bottles, for those who want to go fancy. The windowless building is the perfect place to forget what time it is, once your eyes adjust from riding on the range. After four decades in business, Plush Pony is the remaining location of what was once a 27-bar chain across South Florida. And as Palm Beach County's last country "bar," as opposed to the western dance clubs, it's also a vestige of the past. Just don't go hoping to practice your choreographed moves. 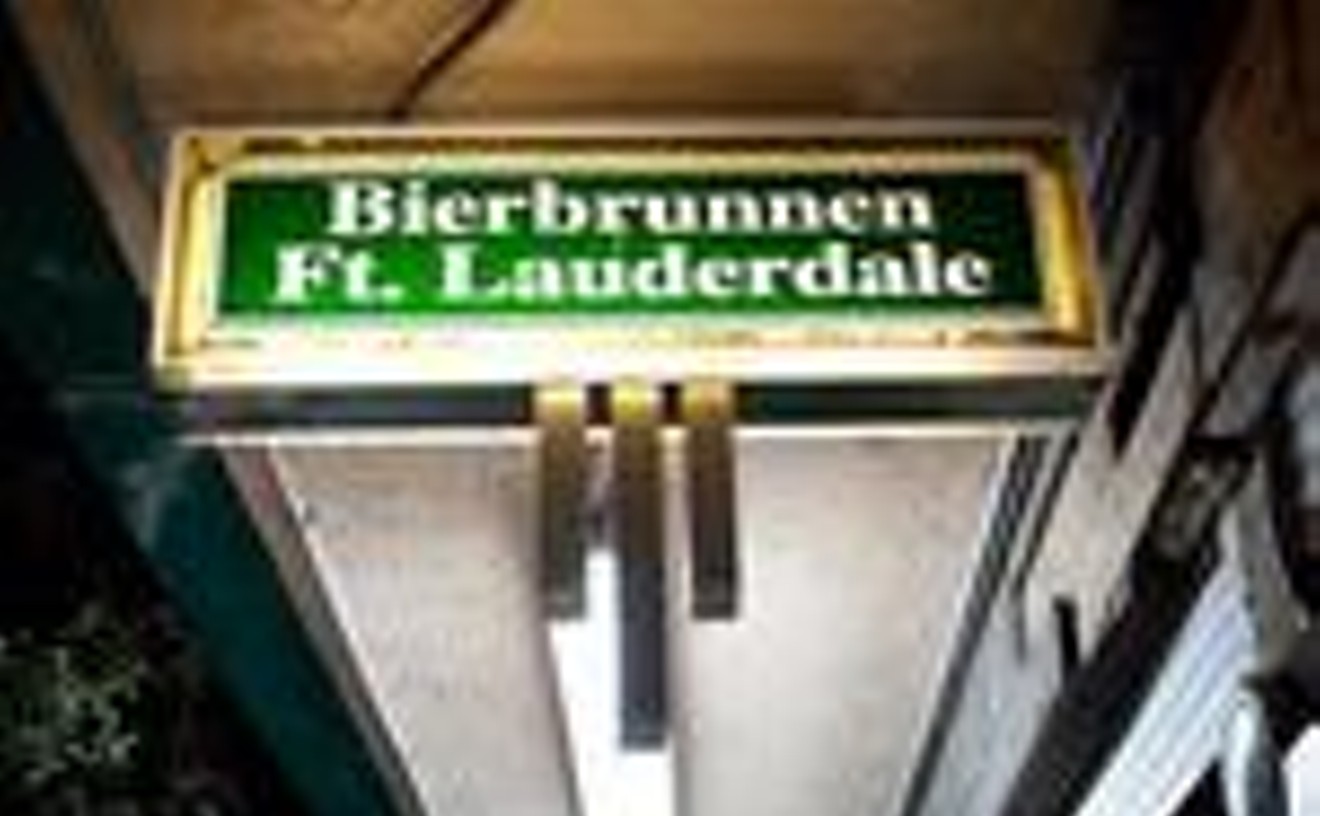 Fort Lauderdale Beach can be a nightmare at times, and let's not even mention -- woo! -- spring break. Bierbrunnen offers a welcome respite from the beachfront bumpin' and grindin' of many other Fort Liquordale establishments. When the clock strikes 4:30 p.m., the German beers (including the drink of the gods, Erdinger) drop down by $1 and domestic and well drinks are half price. Until 7 p.m. it's open season for day drunks, sun-stroked beach dwellers, tourists, and whoever else happens to wander into this open-air bar. Three and a half hours is plenty of time to let loose with co-workers, friends, or strangers, gather some "liquid courage," and possibly embarrass yourself. Isn't that what happy hours are all about?