On your right is a Vietnam Vet named Bob talking about witnessing Cambodians shot in a river as they try to flee the Khmer Rouge. On your left is a former SDS radical named Bill who has enough September 11 conspiracy theories to fill three Oliver Stone feature films. And across the bar is a cocky construction worker called "The Rickster" who talks smack with the best of them but has a good heart. On top of all that, you got two pool tables, buck-25 domestic drafts, a decent jukebox, and a waitress who'll wait to close the bar until the drinkers are ready to call it a night (morning). Welcome to paradise. 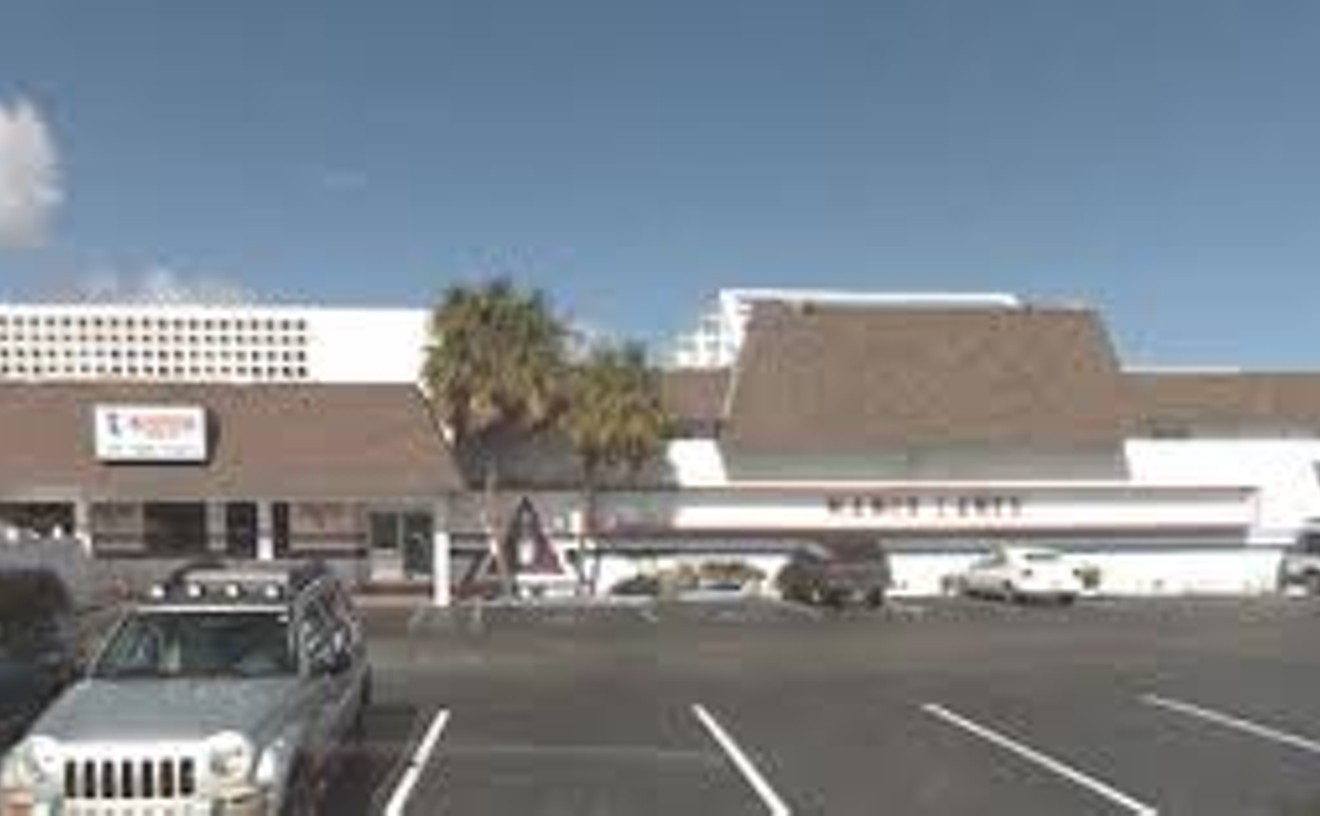 As Sir Elton said, Saturday night's all right for fighting. But Friday night's all right for off-key renditions of classic and not-so-classic songs. Manor Lanes' Sports Den hosts one of the more interesting karaoke nights in Broward County every Friday. Witness as punk-rock kids, frat boys, and seasoned regulars put aside their differences and duet on everything from "Memories" to "I Wanna Sex You Up." Then erase all those memories with cheap beer and bowling. Who says there's nothing to do in Wilton Manors?

What better way to score a phone number than to dance cheek to cheek? Between the hot-body contests, Cream Thursdays, and free champagne giveaways, this Floribbean-themed venue feels like spring break year-round. Hip-hop and dance beats that radiate from DJ Radamas' turntables fuel the rhythm of the body friction heating up the dance floor and have bum-lookers doing a double take. There's no room for wallflowers to hide in the mini-palm trees on the sidelines: This is full-contact grindage stacked two and three deep. The DJ eggs on the peppy mix of 20-something and slightly older singles with shoutouts and within earshot of those chilling across the room at the tropical bar area and pool table. If only the cheeky-monkey plush animal sitting on a swing that overlooks the dance floor could talk...

Smith's has got to be the best place to take your hog these days, if only to pay respects to the memory of the late great Geno Mahler, the bar's effusive, animated night manager, who died earlier this year. Smith Bros. soldiers on without him, with the exception of the caricature now painted on one of the mirrored walls. He has a halo in the picture, and if heaven has a dive bar, he's probably managing it now. In any case, those left behind can expect everything out of Smith's that the biker-bar connoisseur has come to expect -- a pretty lady behind the bar, a cheap bottle of suds, the occasional deafening approach of a local motorcycle club, and a jukebox that'll make you party like it's, oh, about 1988 or so. The occasional cover band adds to the raucous good time. Just, for God's sake, don't pull up on a Vespa. For your own safety.

The sought-after super-VIP seats in front of the DJ booth are filled with Miami Dolphin players every other week. A seat in the high-profile section comes with use of the Sony Playstation, DVD player -- and bragging rights. A petite woman in leopard hotpants, bikini-type top, and high boots creates her own spectacle in the cage to the high-speed pulse of dance music. College-age coeds sandwich one another to Nelly's Hot in Herre, and girls take to the platforms and bust out grind moves. The other VIP area is spread out over three velvety sofas separated by sheer drapes and garnished with flat-screen TVs and vases of flowers. Slow down your groove to Buddha Bar-type beats in the lounge, complete with leopard-print décor, bar, and high-top service and TVs.

Best Place to Drink in Peace

The Fox and Hound 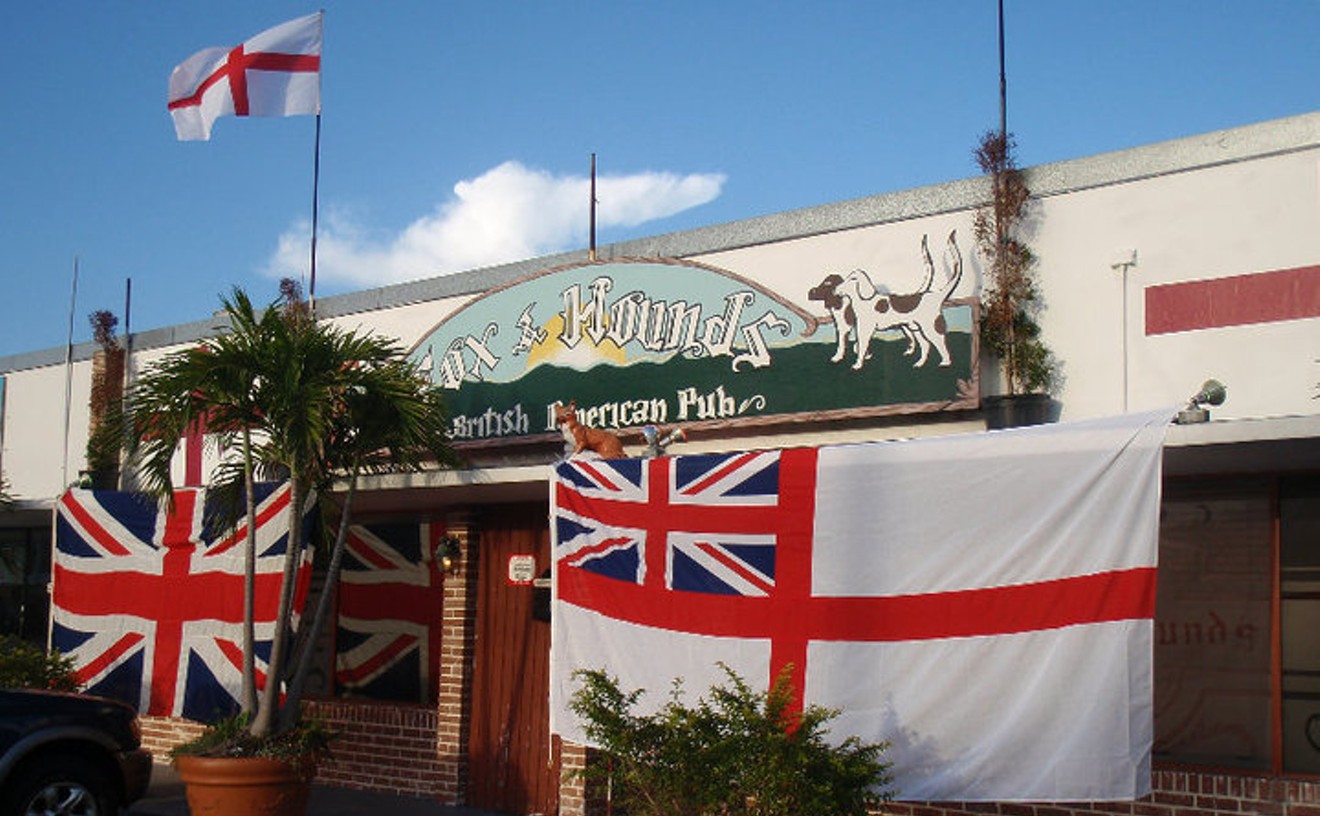 The reputation of a British pub may conjure visions of drunken bar fights, drunken sing-alongs, and drunken, well, anything. And if you've ever visited a British pub that's caught World Cup fever, you have a right to fear for your life. But the Fox and Hound understands the pensive drinker's needs. The Fox, as it is known among its patrons, offers cozy ambiance, low lighting, and friendly service among a plethora of stuffed foxes and hunting trophies. Kinda like you're hanging out in your dad's den. Add one kick-ass jukebox and there's the formula for a perfect night of soul-searching with a frosty mug of Newcastle or Strongbow.

Wendel is one of a handful of local DJs who continue to breathe life into the body of the South Florida electronica scene. He's a barometer in the storm of new releases that flood the techno-music industry every week. With diverse DJ sets of often never-before-heard tracks on largely virgin clubgoer ears, he keeps the local music pool fresh. He shatters the myth that house is just a 4/4 beat by highlighting the sounds that shape the atmosphere of a track, whether it be more drums or bass. The Hollywood DJ's been mixing and making his own music since the early '90s, when rave wasn't a loaded word and its atmosphere of PLUR (peace, love, unity, and respect) was in full effect. The mixologist's versatile offerings include progressive house, trance, and breaks, although he never limits himself to one genre. One thing is sure: You'll never hear him spin a mainstream, play-it-safe set. 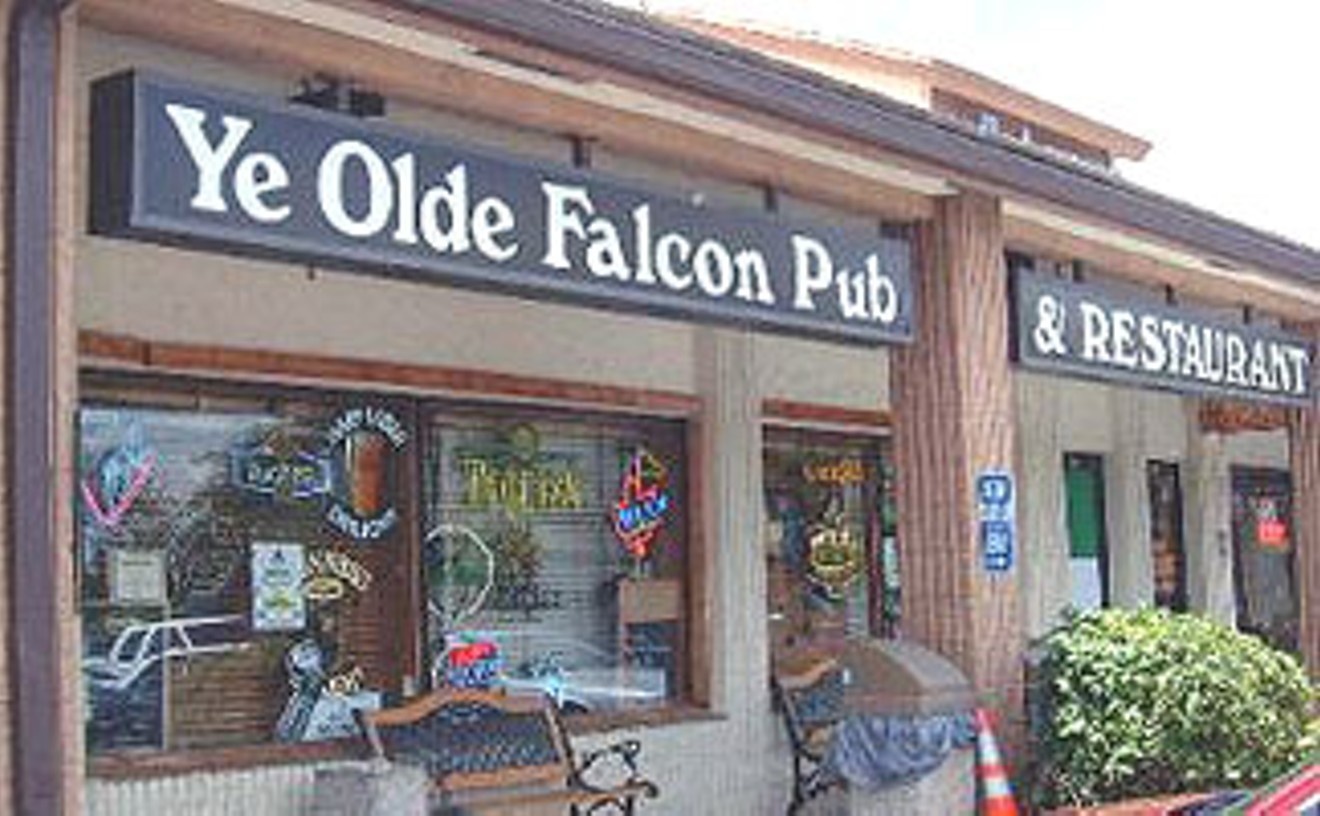 Davie's South University Drive is a textbook case of suburban cheesiness. Drive around here at night and (if not for the palm trees) you could just as well be cruising the strip-mall labyrinth of Pawtucket, Prescott, or Peoria. Even inside the nondescript Olde Falcon Pub, there's nothing that jumps out and shouts, "Hey, you're in Davie!" the way a saddle shop or, you know, a calf-branding class does. But Old Falcon pulls some of the best pints in town, highlighting a mind-blowing assortment of British beers (30 brands on tap, more than 40 in bottles). So you can get toasted in style, play darts all night, order some of the region's best fish and chips, or (slurp) enjoy duck tenders with orange marmalade as you strain to hear your buddy's conversation over the din of everyone else's -- and instinctively know, Davie or not, you've come to the right place.

It's Sunday morning, and you've been hangin' hard for two nights now. Gadzooks! No question about it. You need a Bloody Mary. Don't try confusing us with a leafy stalk of celery (which only gets in the way) and a froufrou highball glass. Give us the real deal, like they do at Le Tub. Give us a blend of vitamin C-packed tomato juice, an extra dash of Tabasco (punish us, please), some secret ingredients, and, finally, a dose of vodka straight from the bottle, gurgling out like cool water in the desert. All right, this one comes in a plastic cup. But you can carry it outside to a wooden booth, right next to the Intracoastal (you can almost put your foot in the water), and watch the boats go by. And get your head together. 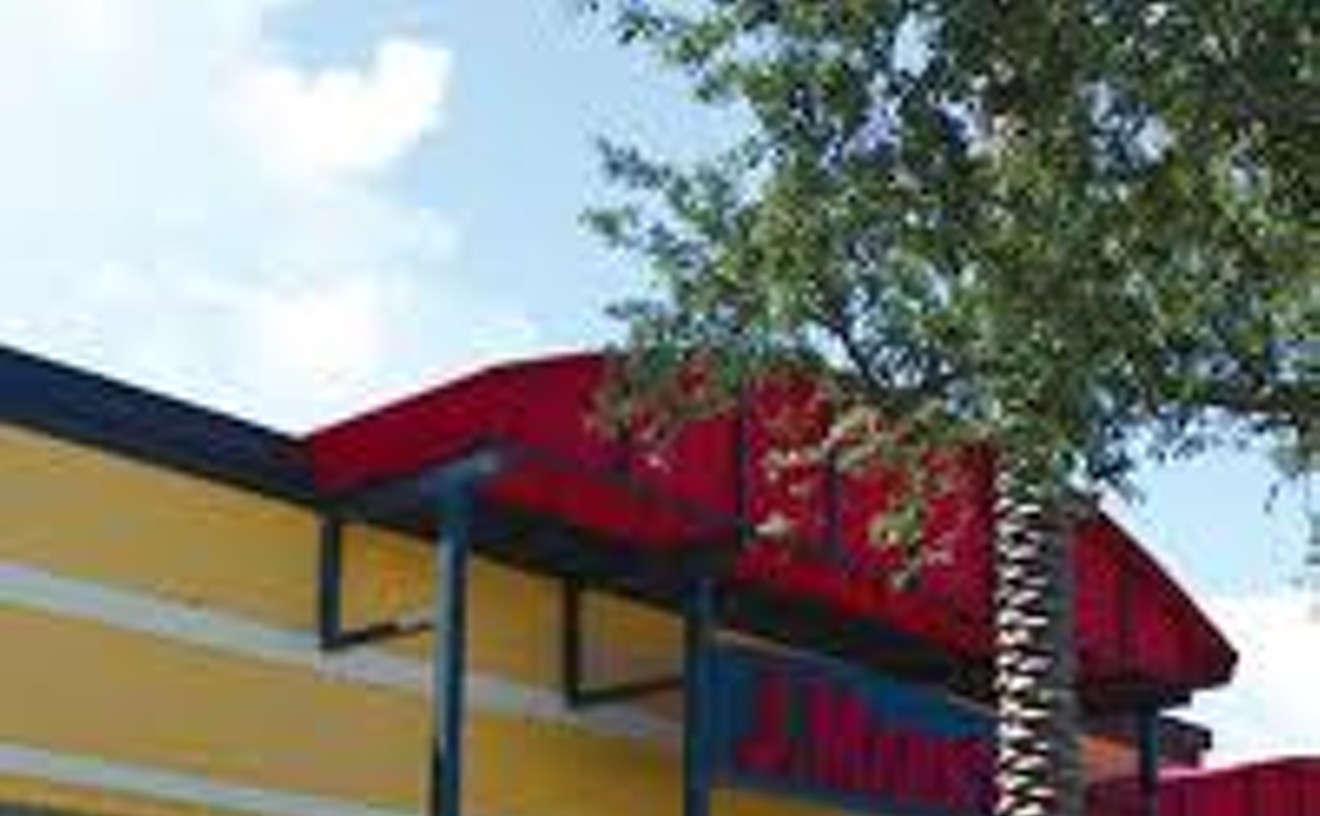 Androgyny rules at J's Bar, a fun-filled nightspot in an off-the-beaten-path southwest Fort Lauderdale neighborhood. Luscious young chicas clad in baggy, saggy jeans down bottles of Bud with big butch bull-dykes, and the crowd is as genuinely multiculti as any you've ever walked into, even by South Florida standards. And everyone's welcome, even conservative old farts just stopping in to knock a few back after a day of golf. The jukebox mixes current hip-hop hits with plenty of Ani DiFranco, Melissa Etheridge, Sarah McLachlan, and KT Oslin. J's is one-half typical South Florida strip-mall sports bar with black spray-painted dropped-ceiling tiles and a pair of pool tables and one-half gay disco with parquet flooring, twirling mirror ball, and raised stage. The latter comes in handy once a month when it's overrun by the full-contact karaoke crew of drag kings and queens called SisterSpeak. That's when J's (if it were a tea kettle) really gets to whistling. Maybe you'll spy someone wearing a bathrobe lip-synching a Garth Brooks tune while holding a pink double-headed jelly dong like a microphone. And, really, isn't that what fun's all about?