We're gonna be right there.

I dunno. What about the carbs?

C'mon, it's been three weeks.

The light's still on.

What about the carbs, though?

What about the chocolate/vanilla swirl? With Heath pieces? A small one is only $2.65.

What about the carbs?

It's Sunday afternoon and you've got some room to spare after a medium-sized lunch. You're in the mood for dessert but don't know whether to have something cold and creamy or crisp and flaky. In this case, the simplest solution is to head over to Sonny's Gelato Café and let them choose for you. Sonny's offers roughly 40 flavors of Italian ice cream in cups and cones. For a single serving, prices range from $2.75 to $4.75. For larger, take-home orders, there are pints, quarts, and tubs (ten gallons). If you prefer something a little warmer, there's an assortment of baked goods as well, including cheese cake (New York, cranapple, or ricotta for $2.75 to $3.75 a slice), tiramisu ($3.75 per square), cannoli ($1.95), and biscotti (cinnamon hazelnut, chocolate chip, and almond, $8 per pound). And to keep your tongue warm, Sonny's has plenty of espresso and cappuccino that you can sip while relaxing in the piazza-like outdoor patio. Sonny's Gelato Café opens at 10:30 a.m. Monday through Saturday and 1 p.m. on Sunday. Readers' Choice: Cheesecake Factory 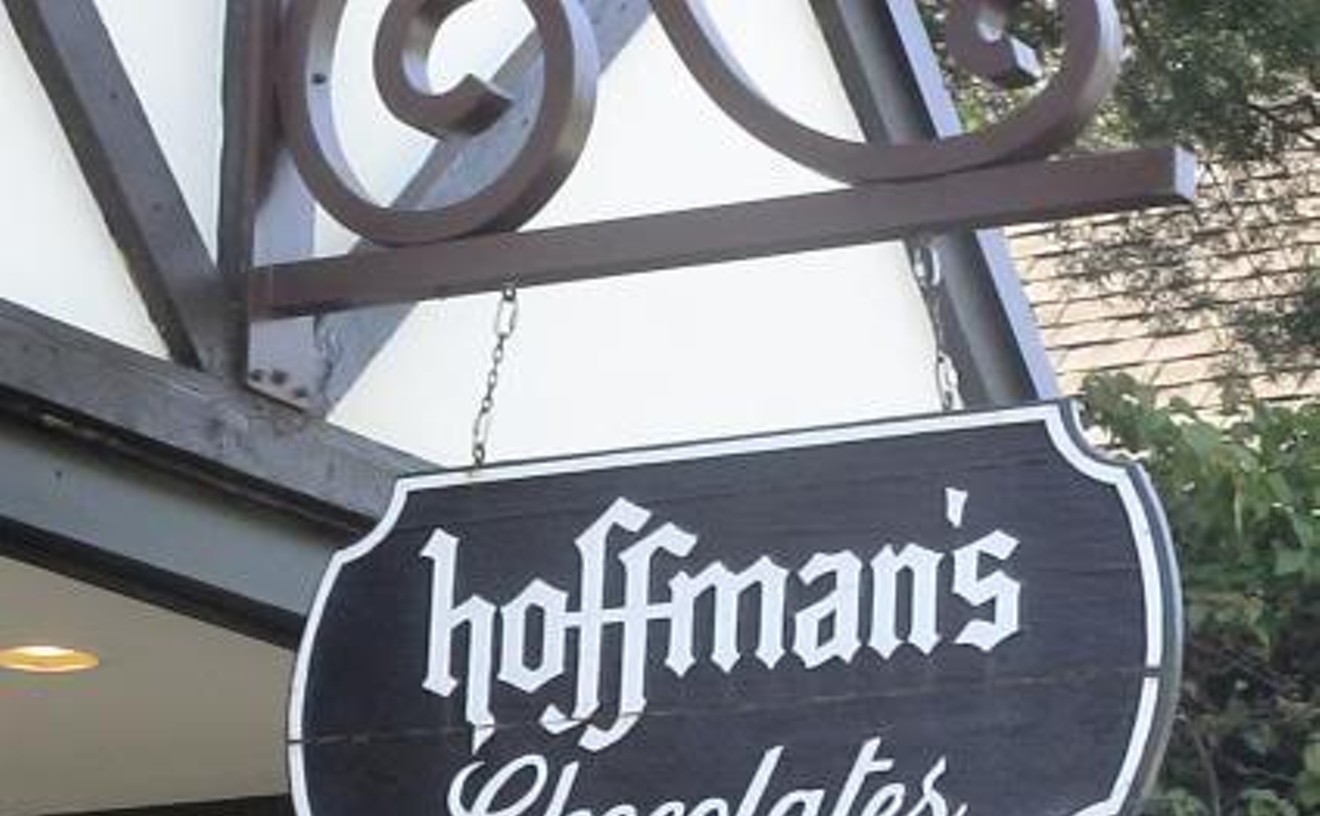 More than 30 years after Hoffman's Chocolates started in a dinky Lake Worth storefront, the place is now one of the country's premier candy makers. Sure, it's long been a favorite of Palm Beach County sweet tooths. They've flocked to Hoffman's for years, if simply for the coconut cashew crunch, a heavenly sweet and sugary concoction that goes for $6.95 a pound. But now the secret's out. Bon Appetit magazine has named Hoffman's one of the country's best chocolate makers, and the Wall Street Journal has claimed it has the best Easter baskets anywhere. The $75 wicker basket comes stuffed with toys and candy, including a six-ounce bunny and an eight-ounce fudge egg. Working out of a one-acre headquarters in Greenacres, Hoffman's employees claim the secret is in the chocolate recipe, made from a blend of beans, mostly from Africa, that are specifically roasted for the company. Hoffman's claims to have a cocoa powder and cocoa butter content that rivals any of the big-name candy makers. That's the secret, apparently, to the well-known chocolate-covered strawberries; Hoffman's are cell-phone sized and covered in so much dark, white, and milk chocolate that it pools beneath them. They're available only on Friday for $19.95 a pound. There's talk at the company of expanding outside Palm Beach County, but with five stores and an airport location, you won't need to make a long drive for some of the country's best chocolate.

Americans will consume more than 3 billion pounds of fish this year, but some of us know so little of piscine matters that we buy our seafood at the supermarket, where "catch of the day" should more accurately be referred to as "catch of the week." At Delray Seafood, the creatures are delivered to the back door daily, and fishmongers clean them so quickly that, to paraphrase Satchel Paige, they can put a knife to a snapper as you turn out the light and there'll be two clean filets on the table before the bulb goes off. Freshness is the whole game when it comes to seafood, but variety is still the spice of life, and Delray hauls in lesser-known species such as Spanish mackerel, butterfish, sea trout, and mullet -- all shining atop glittery crushed ice. Prices generally range from $4.95 a pound (flounder) to $13.95 a pound (Chilean sea bass), which is slightly higher than the supermarket, but the difference in quality is quantifiable. Delray Seafood has taken pride in its products since 1960, when Nicholas and Nellie Griek opened the shop. Their son and his family run things now and are knowledgeable enough ichthyophiles that they can help you choose wisely for dinner and perhaps also tell you what piscine and ichthyophile mean. Closed Sundays and Mondays. 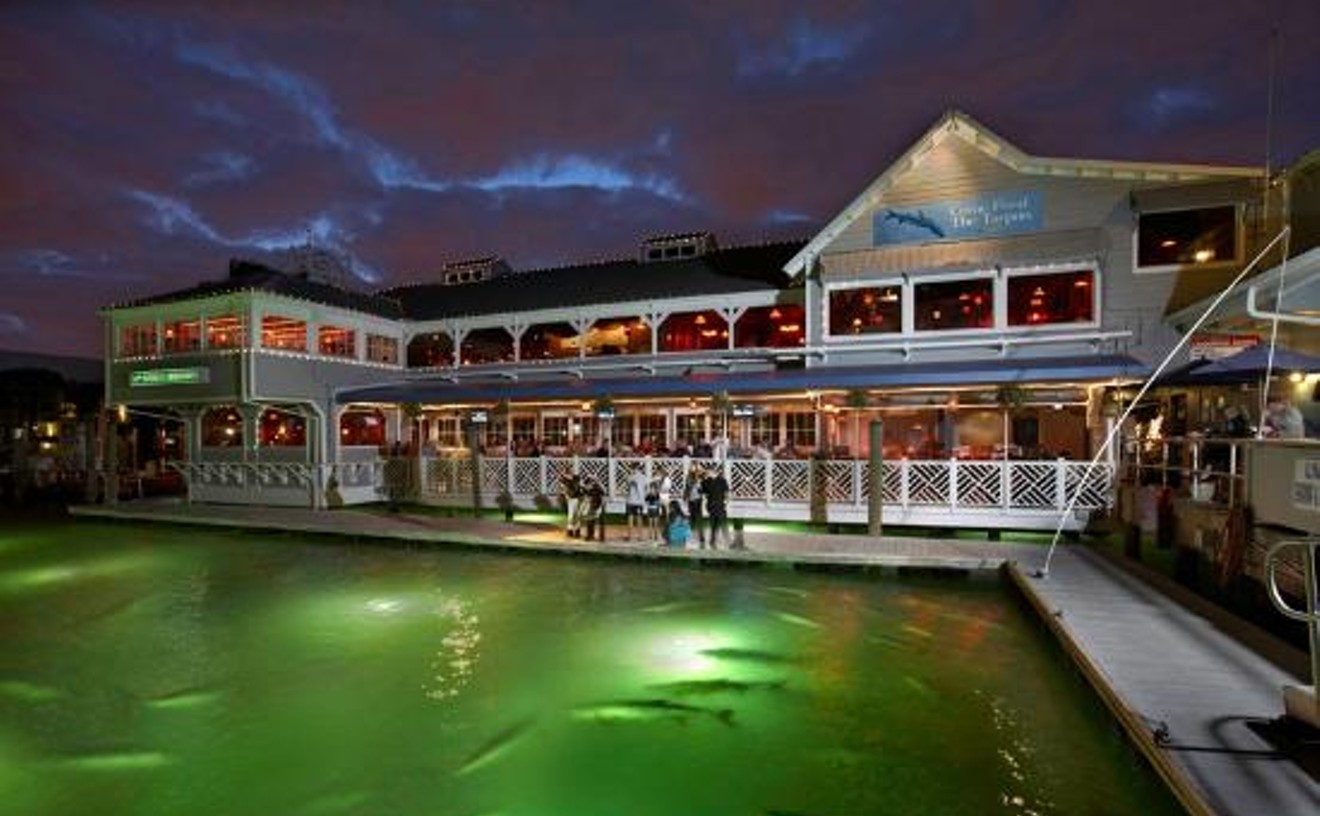 If you haven't taken a boat on the Intracoastal, you don't know Fort Lauderdale. Seeing the multimillion-dollar mansions gives you an idea of why there's so much corruption here. These people need to steal just to pay their damn property taxes. But if you're looking for a good place to drop your own hard-earned coin, get to the Fisheries. Climb on the water taxi at Riverwalk, fork over five bucks, and motor there in style. The two-story restaurant is really two establishments: downstairs is casual, with live music and $8 baskets of fried food. Upstairs is all about fine dining and great service. It's expensive -- expect to spend about $30 for an entrée -- but the ambience and waterfront view are enough to justify the price. Built in the 1970s, it's not that old, but the late, legendary architect Bill Bigoney gave it the feel of an old packing house. Even the urinals are cool; they're wooden with old-fashioned water closets over them for flushing. And the food is wonderful, from the little shrimp salad to the sunflower wheat bread to the audaciously thick tuna filet mignon. If you're in an adventurous mood, go for the alligator and kangaroo, though we'd recommend prawns, lobster, or the Asian-sautéed snapper. The service is great too. All you have to do is kick back and enjoy the ride.

Meal in a Pie 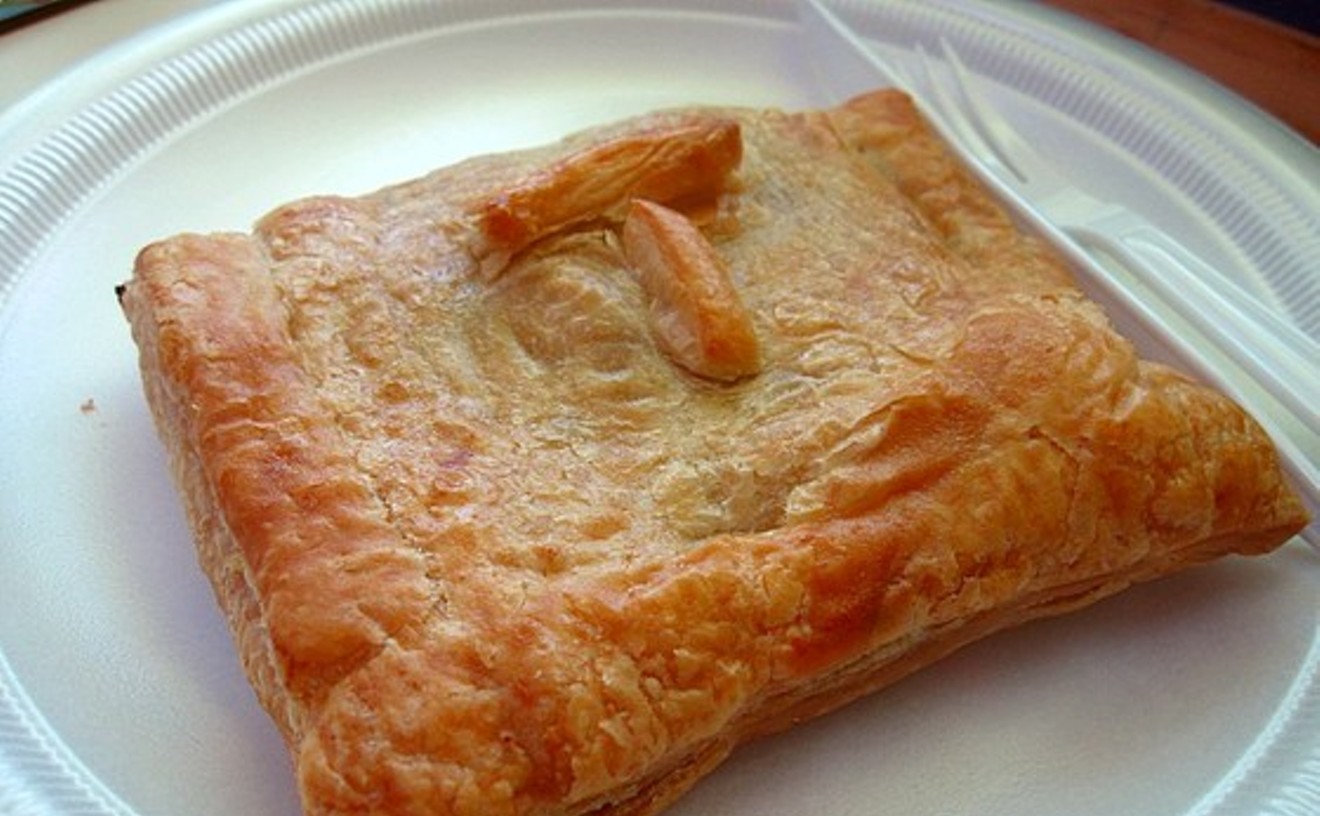 South Africans call them just "pies," their fast-food equivalent of the American hamburger. But there's nothing plain about the meat and vegetable pastries served by Rod and Tracey Wiggill, the SoAf ex-pats who run this storefront charmer. Service is deli-style, but two cozy tables await if you want to eat in. The pies, most under $4, are thick, bingo-card-sized delights, the kind of layered decadence crabby nutritionists campaign against. Stuffed inside are blends of meat, veggies, and gravies. The most popular among South Africans is the bobotie, which is crammed with Cape Malay curried ground beef and raisins. The Wiggills have modified one traditional favorite, chicken and mushroom, by tossing out the 'shrooms and adding peas and carrots. "It's more like the chicken pot pies everyone's used to here," the missus says. Not into meat? Try the spinach and feta cheese or the vegetable thai. The Wiggills also offer frozen pies, which you can bake yourself for a hot-pastry meal in about 20 minutes. South African groceries are also available.

My Market and Deli 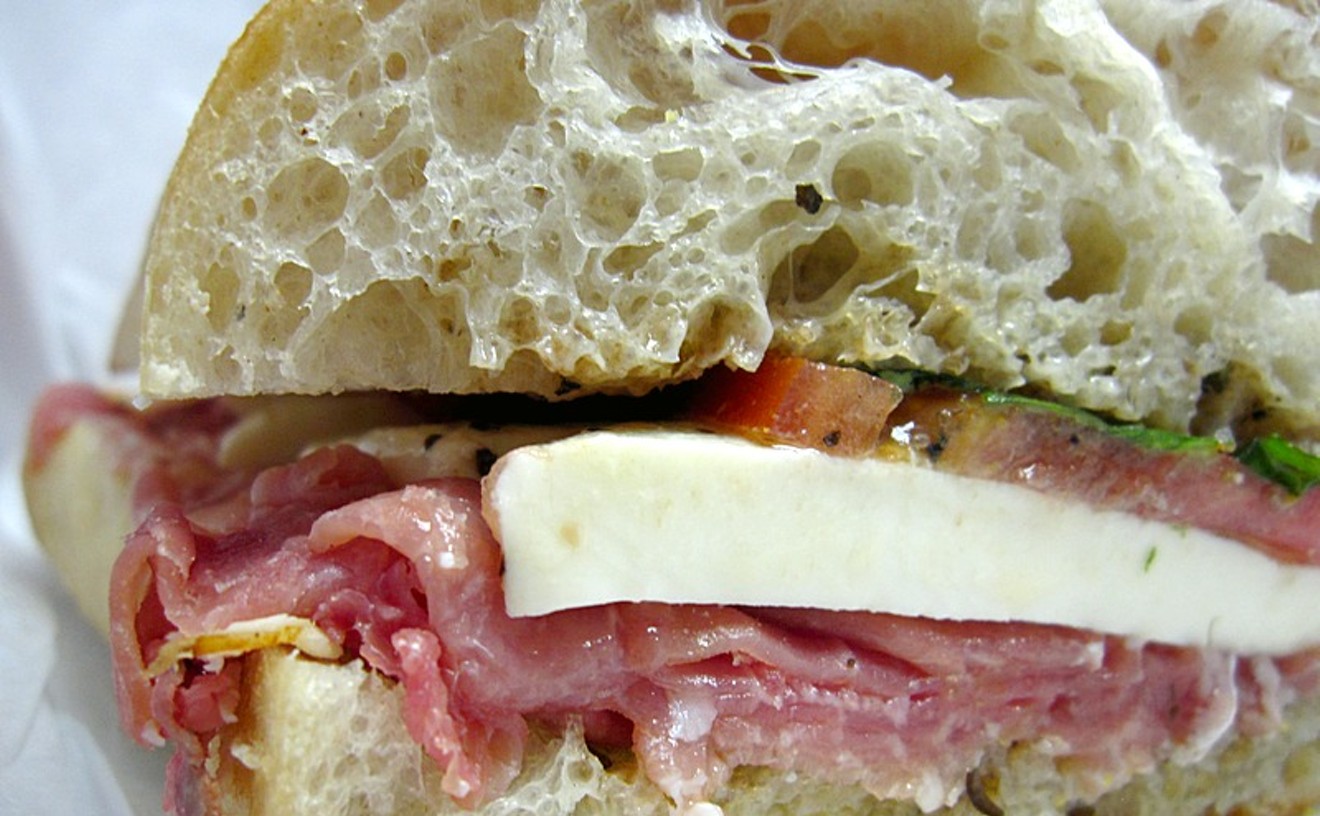 Have you ever eaten a sandwich from a convenience store? They're fucking horrible. They're soggy. They're stale. That's certainly not egg salad, my friend. My Market is different. You've probably driven by it before. You might have stopped there to get tampons or perhaps a Slushy or a Powerbar. But have you even bothered to walk to the back of My Market? Because if you had, you would have noticed a full freakin' deli that's been there for the past 12 years and serves the best and biggest sandwiches allowed west of the train tracks. Turkey, pastrami, ham, roast beef, rye, whole wheat. It's all there, waiting. For instance, the Pee Wee ($5.50) consists of a mouth-watering combination of maple-glazed turkey on grilled rye bread with American cheese, mayo, brown mustard, lettuce, and tomato. It's served hot. Just give it a chance, baby. It won't hurt you this time. 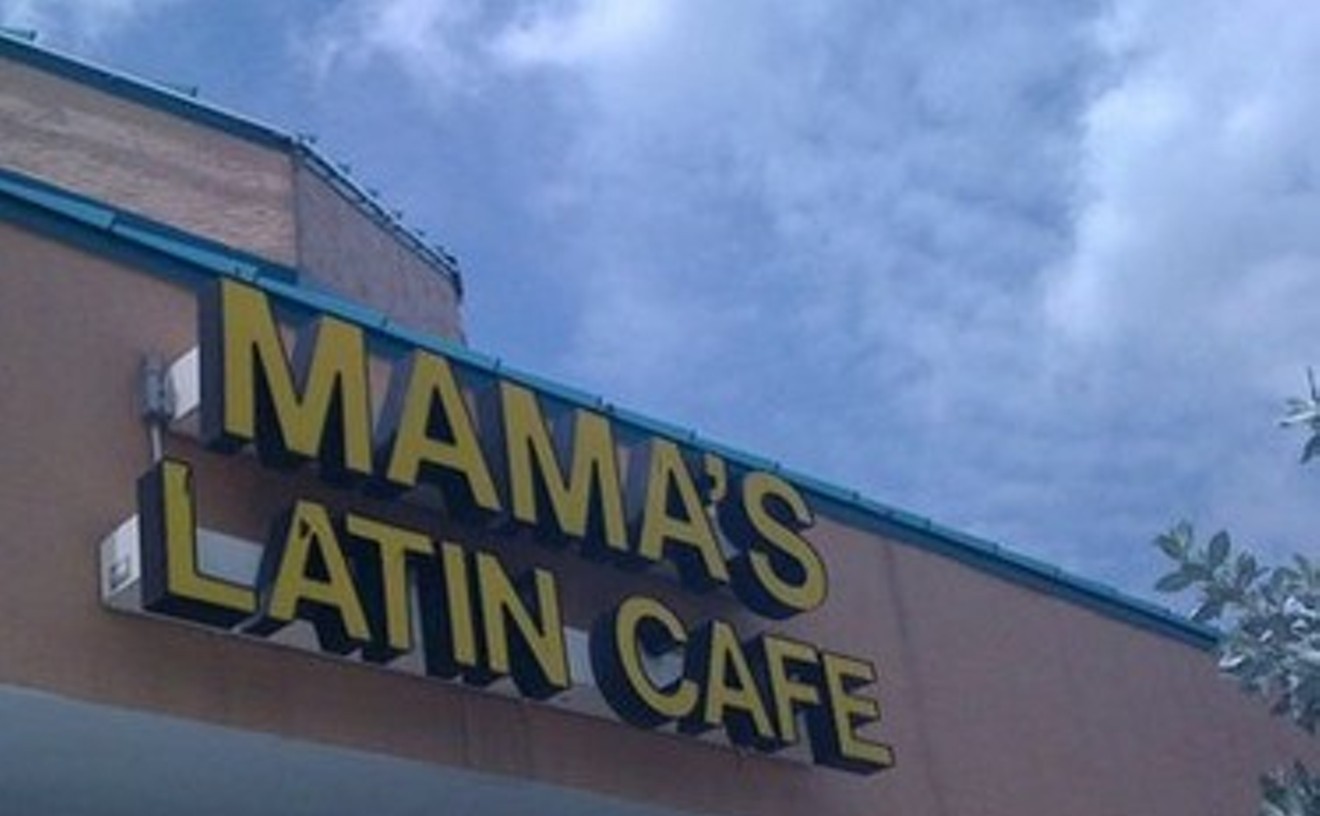 Sometimes you can't get to Havana -- or even Miami. Sometimes, this five-table, 8-month-old splinter of a café at the western end of the Southland Shopping Center is as far as you make it for a Cuban sandwich fix so satisfying you'll wonder why Mama isn't front-page news. Oh, there are lots of breakfast items (topping out at $4.50) and soups ($2 to $3) and croquettes ($1.50) and the usual Cuban-y things on the menu -- like you care. What you came for is what you'll pull up your barstool to the blue plastic malachite countertop for: ham pork and thinly sliced Swiss cheese and pickles and mustard, all between bread ironed flatter than Bubba's forehead, blending neatly to form a taste as unique as a kiss. The low-overhead prices are much more in line with those of Havana than South Beach (where a Cuban sandwich can run $9). Although you hear mostly Spanish among the customers, gringos are welcomed by the capable staff. Mira. That means you. Open from 8 a.m. to 8 p.m. every day but Sunday, Mama's packs 'em in at lunchtime, so drop by nearby Big Lots until the rush dies down. Either way, you're on to one of the real bargains in town. 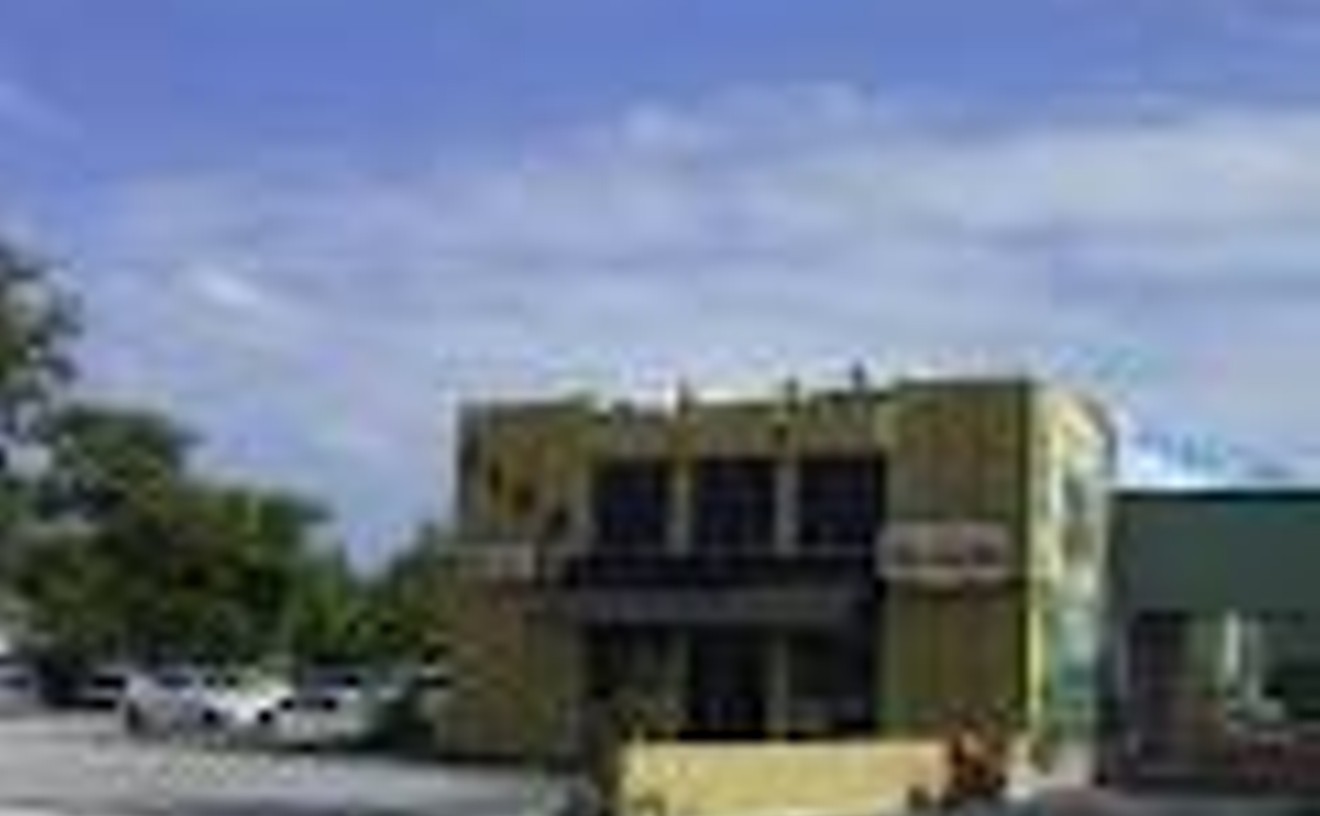 A sub is a sandwich made on a lengthy loaf of crusted bread that is layered with cold cuts, lettuce, tomato, and numerous garnishings, splashed with olive oil and vinegar, and dashed with salt, coarse ground pepper, and, if you're lucky, oregano. You can also call a sub a hoagie. Or a grinder. Or a hero. Or a Blimpie if you hang with the wrong sort of people. The right sort would be the types who frequent Marco's Boulevard Subs, where they pile on the ham, salami, capicola, and provolone and top it with salad, pickles, and peppers -- hot and sweet. A dozen types of hefty cold-cut-based subs are tossed together with aplomb, including a kick-ass BLT. Sub rolls come in whole wheat too for those who wish to delude themselves into thinking they're eating health food. Does Boulevard finish its sandwiches with a sprinkle of oregano? Of course -- this is, after all, the top stop for those to whom subway means only that train in NYC. 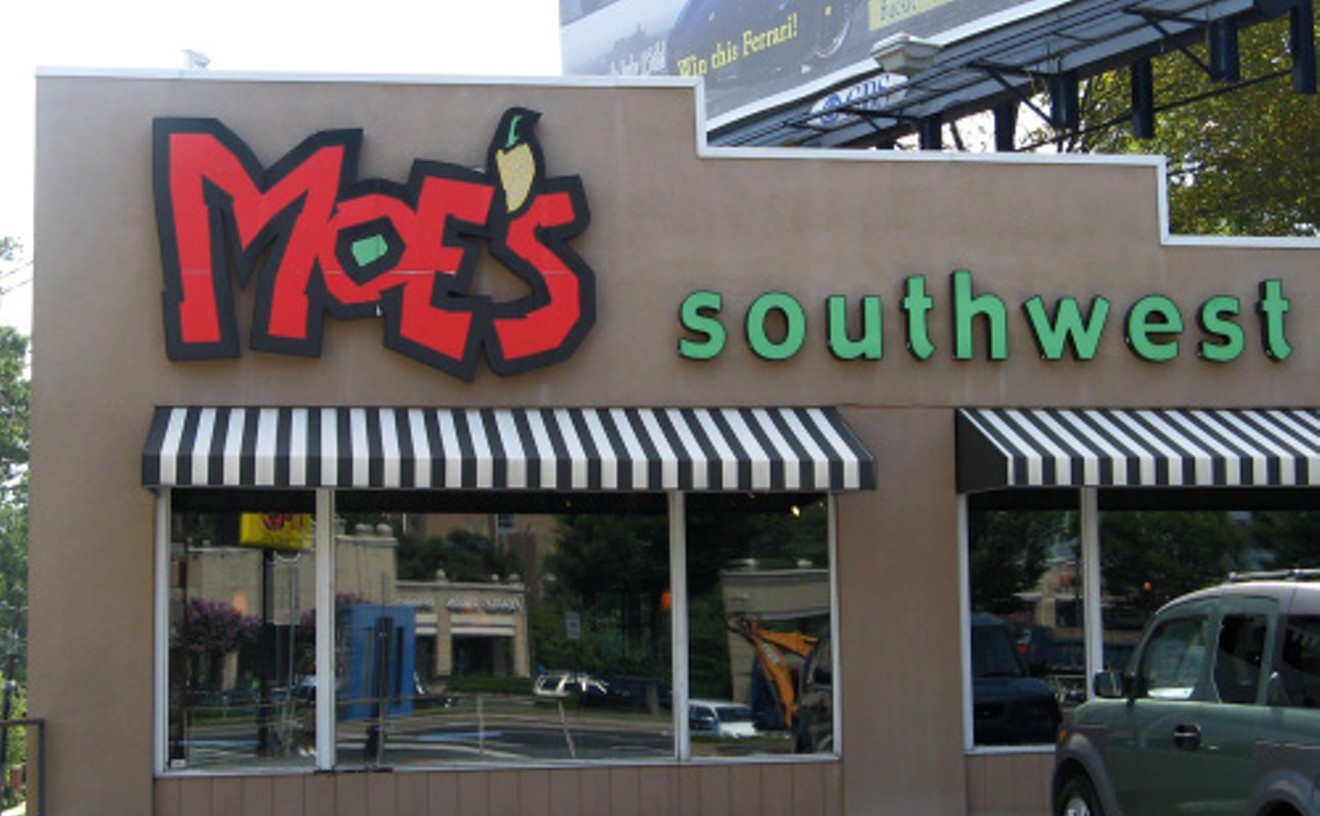 Turkey. Turkey dull. Still, turkey good. Turkey tries. Could be better. Turkey meets rye. Turkey improves with mustard, oil, and vinegar. Turkey makes good with usual lettuce, tomato, pickles, and olives. Then turkey tackles pepper. Hot pepper! Sweet pepper! Green pepper! Cherry pepper! Banana pepper! Turkey tastes tangy, tantalizing, titillating. The hyperactive hots! The salacious sweets! And it comes in a hulking, fist-tall wad of a $7 sandwich that only a hippo could bite through in one chomp. Oh, if only lunch came more than once a day!