Fort Lauderdale finally got its big-time rock venue last year. Revolution does more than hip-hop, dance, and house beats. The Himmarshee club brings big names to town. So far, Snoop Dogg, George Clinton, Slayer, and Mos Def, among others, have graced the stage of the former Edge, Chili Pepper, and Star Bar. On a good night, 3,000 people crowd in. Manager Jackie Bressler, a former Deadhead from (where else?) New Jersey, and her management team (including production manager Jason Bray, head of security Archie Powles, and operations director Shane Berry) have a long-term entry in Fort Lauderdale club life on their hands. At least, we hope so.

Success on the club scene involves risks, Bressler says. It's like her choice of carny amusements. "I was always into the rides," she says. "The scarier and faster, the better." Sounds like a prescription for a club named Revolution. 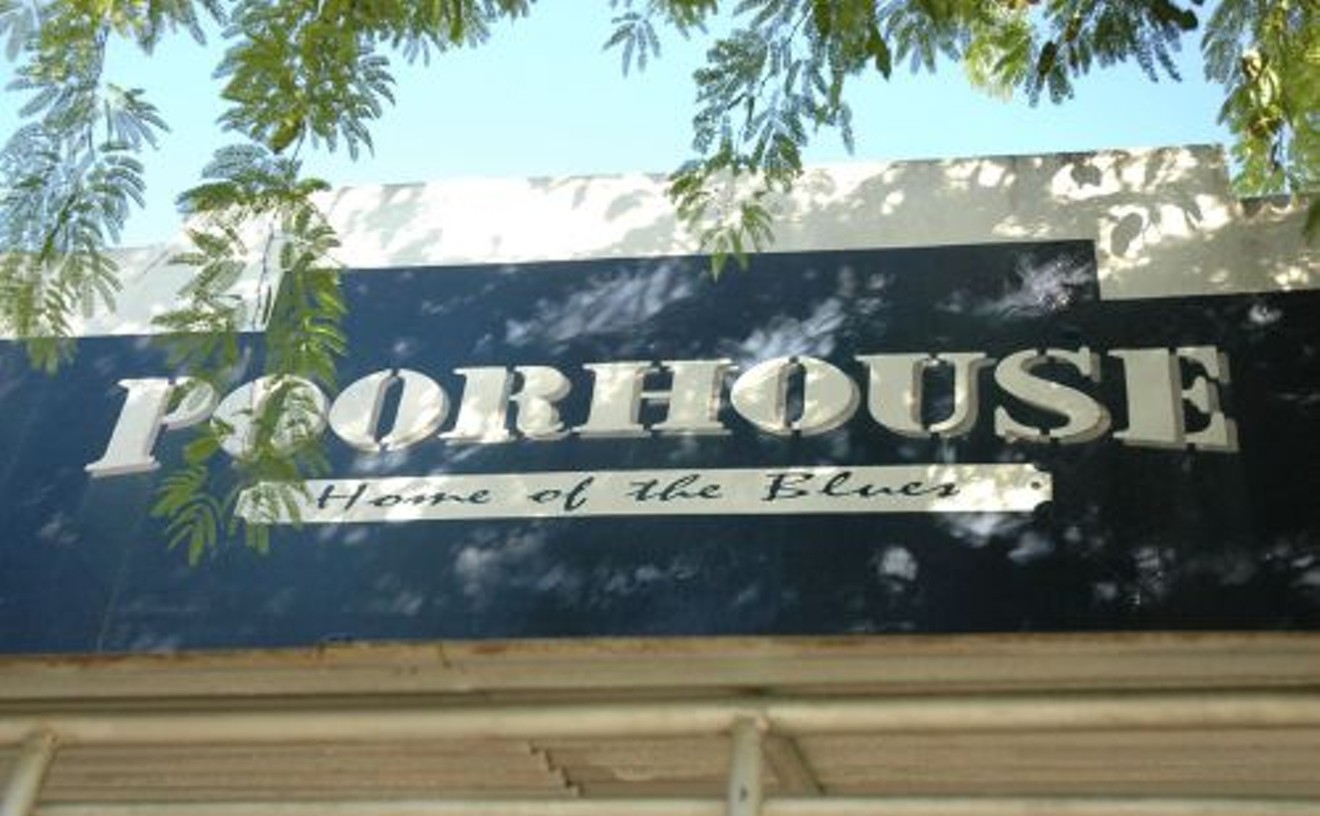 Dark, loud, smelly, and glorious, the Poor House is everything a real rock 'n' roll bar should be. There's a tangible sense of reckless excess within its smoke-stained walls, a well-lacquered, incidental hipness developed from years of serious drinking and heavy shredding. Think spring break meets the Sunset Strip and you get an idea of the kind of head-banging, shot-taking shenanigans that go down. With a no-cover policy and a roster that ranges from boogie-friendly blues to max-rock bands like AC Cobra and Pandabite, Poor House offers something for everyone every night of the week (as long as you don't mind Third World bathroom conditions). Cheap drinks made stiff by a surprisingly courteous bar staff keep the eardrums relatively numb to the sound system's cranked-past-ten volume, so don't be afraid to get in front of the low stage and make an ass of yourself. This is rock 'n' roll, after all.

There's a hedge between Waxy O' Connor's and the busy 17th Street Causeway that serves to enclose a rollicking outdoor seating section, where pints of Guinness and Bass are consumed by hearty young men and women. Comfortable swinging tables, TV sets tuned to sports channels, and a diverse crowd of well-traveled yacht hands add up to a party for the senses. Inside, the dark-wood bar is considerably more quaint, though equally packed. Expats sit idly at the bar sipping beer, ready to dispense their worldly wisdom. Live rock bands move the throngs of Waxy-ites with upbeat covers. And for those looking for a relaxing night, the nook-like booths that line the wall provide intimate retreats. Happy hour is from 4 to 7 p.m.; that's when drink prices are reduced (though you don't get the usual half price). 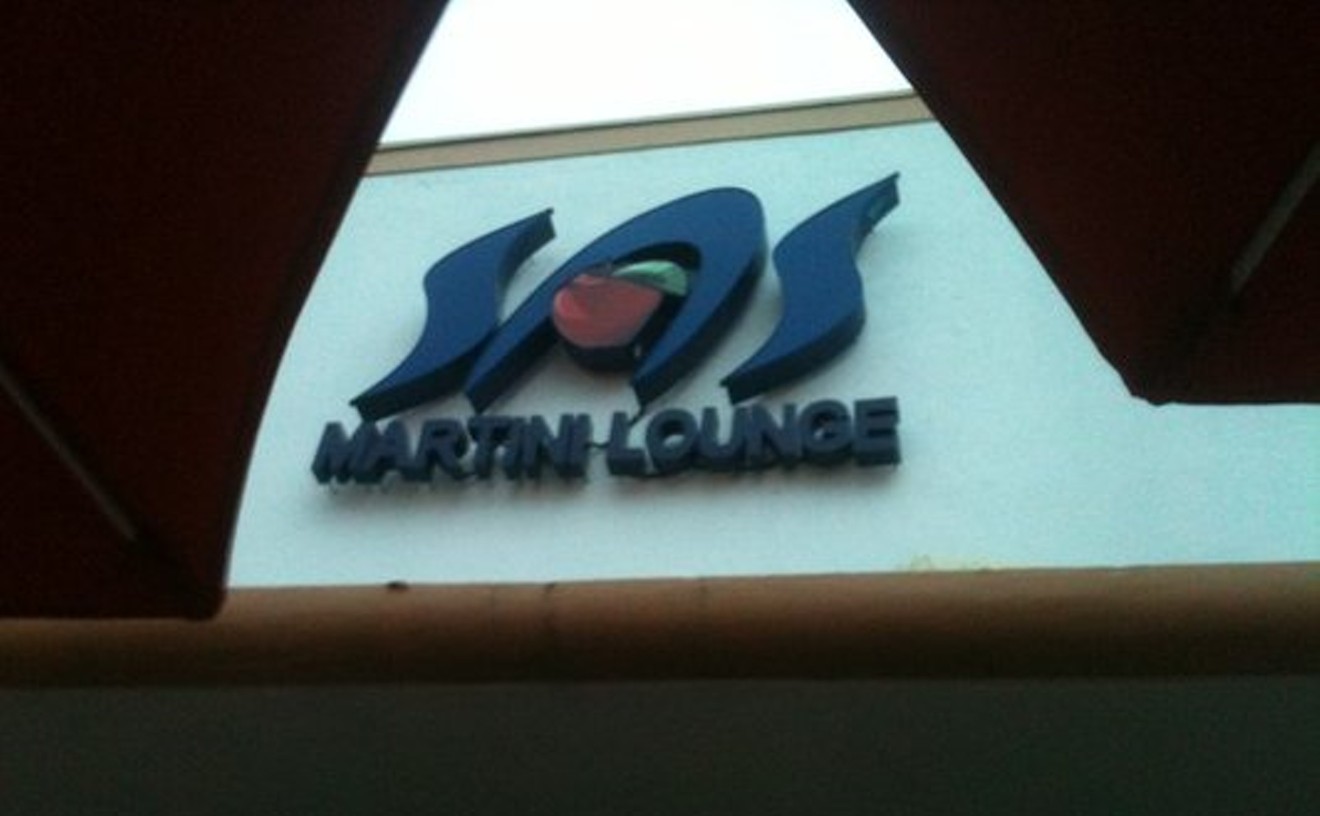 Sometimes, all you really need from a bar is comfort, space to move around in, and a jukebox loaded with early '90s rock. The kind of place with free peanuts and a floor to catch the shells. Simple. Sure, it doesn't hurt that the spacious Sauer Apple Saloon balances four nights of live music into the equation, including original local rock on Wednesdays, Fridays, and Saturdays. Throwing love to local musicians is way cool. And that's not all. DJs provide the tunes on Monday nights, when there's an "In the Biz" extended happy hour, and Thursday nights, when ladies get two-for-one martinis and free sangria starting at 9 p.m. By the way, typical cocktails run around $5, and a Budweiser goes for $3.25. Happy hour is two-for-one drinks every day from 4 to 7 p.m., so it's seriously affordable. The daily fare includes quality liquors like Bombay Sapphire gin, Skyy vodka, Bacardi rum, and Jim Beam bourbon. The coolest part is: Happy hour tokens are redeemable any time, and that means good times.

Cucina Dell' Arte has been around for years. Snooty Palm Beachers have stuffed their rich faces full of pasta there since it was a quiet Italian joint on Dixie Highway. Then came the Coniglio family, owners of the raucous and successful E.R. Bradley's. The Coniglios bought Cucina in its new digs on Royal Poinciana Way in April 2003 and appointed the family's next generation, 26-year-old Nicholas Coniglio, owner of the place. The youngster quickly turned Cucina into something else completely. Now Cucina has become the first good reason since, well, ever to make a nighttime journey over to the island. The place is packed on weekend nights with a crowd that has made Cucina perhaps the island's first-ever hangout for us working folk. There's regularly a smattering of the hoi polloi from the mainland mixing with the Palm Beachers in their Easter-egg-colored polos. "We say the crowd is from 21 to 71," says Coniglio, a Palm Beach native and former snowboarding instructor. "And you can get everything from bathing suits to tuxedoes." Coniglio expanded the restaurant's hours, and the place now is regularly packed from opening at 7 a.m. to closing at 3 in the morning. Oh, and that thing poking you in the back while you're on the dance floor? That's the overstuffed wallet of the guy in the tomato-soup-colored blazer.

Photo courtesy of Vienna Wine Bar.
It's got the posh bistro ambiance, and the bar looks like it was transported from the Sideways set, but don't worry: This place isn't just for wine snobs. The owner, Danish-born Per Jacobsen, makes sure of that. He's a first-rate host who knows his wine and is happy to impart his knowledge and vast selection of vino to all comers, whether they be Miles Raymond (the aficionado played by Paul Giamatti in the aforementioned flick) or Six Pack Joe. And when Per isn't there to guide you, the rest of the staff gives you that rare commodity in South Florida: fine service. As for the goods, well, the markups on the bottles aren't all that bad (you can get a bottle of 1997 Barolo that retails for about $35 for $59). But let's face it, when you're talking about wine bars, you have to be ready to plunk down some dough, especially if you plan to eat (first-rate cuisine) and drink until your soul is good and merry. And Vienna is the place to do that.

Five dollars an hour is the rate for quality pool at this downtown Fort Lauderdale hot spot. The joint has been open only since September, and the equipment has weathered well: cues straighter than the missionary position, balls yet to be pock-chipped with wear. The black felt carrying the huge Jack Daniels logo is so slick and debris-free that your shots feel almost too straight, too true, for bar tables. Rack 'em and crack 'em until late at night, when the striped-shirt hounds come to drool over swishing tail, the tables get covered with black tops, and zaftig, nubile, female bartenders grind atop them. As you take a free shot of liquor from between their bosoms, you may forgive yourself for being a letch instead of a sportsman, for while the billiards tables may be taken, there's always pocket pool. 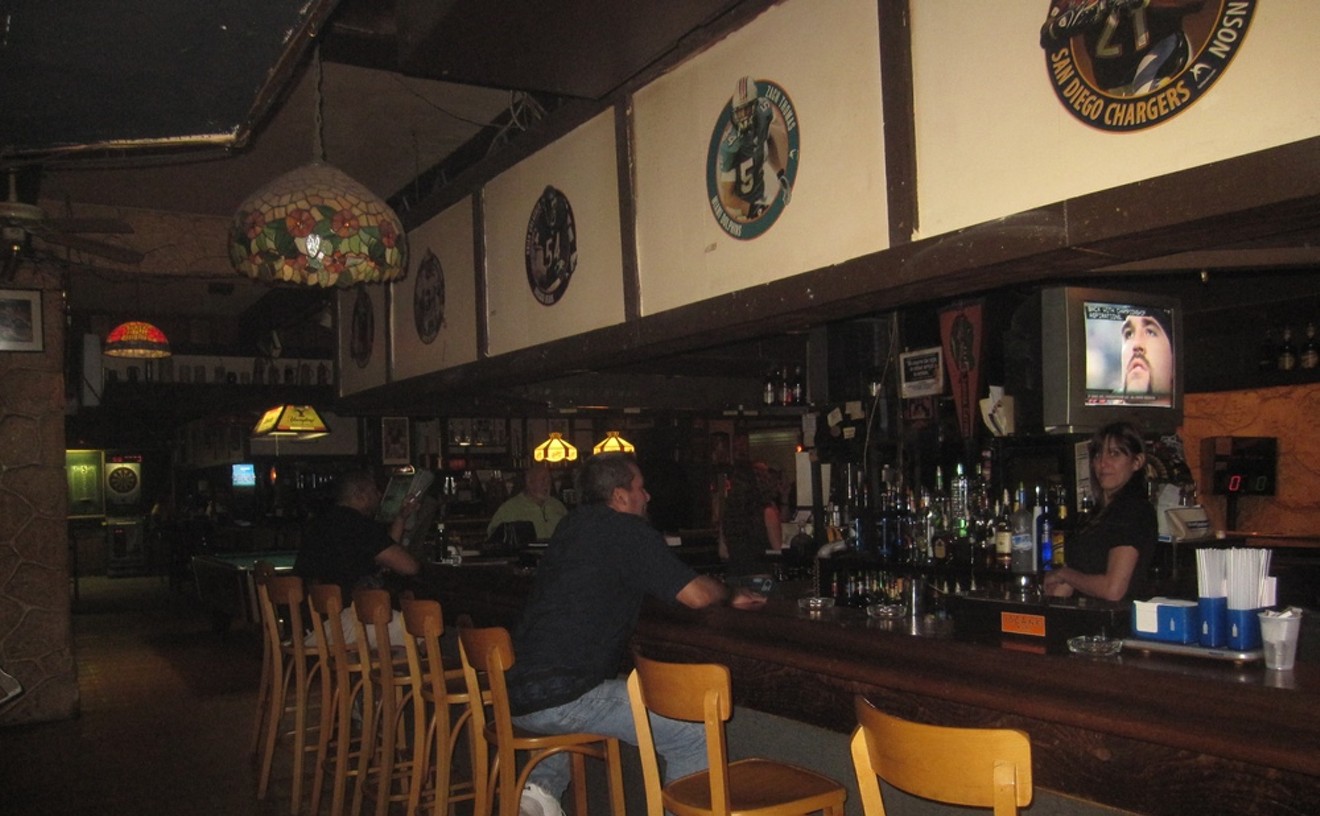 Anyone with sniper-precise dart-throwing aim can tell you the three requirements needed for a good dart joint: cheap beer, a laid-back crowd, and a jukebox with tunes circa 1996. Jester's, a dark, unpretentious place with wood-paneled walls and leather barstools scuffed and worn with love, meets all three. You won't get any fancy imported beers here, but if 7-Eleven carries it, so does Jester's. The crowd is neighborly and relaxed. And if the jukebox is any indication, Chris Cornell still belts out lyrics for Soundgarden. Best yet, Jester's is open until 4 a.m. every night. Add to that mix a dozen traditional and electronic dart boards and you've got yourself one righteous place to hurl scalpel-sharp objects. The Jester's dart league plays Tuesdays and Thursdays at 8 p.m. Ask for Rosie if you want to compete.

Blondie's on the Beach

Blondie's is the kind of beachfront establishment where you could do a lot of things: You could meet some lonely out-of-towners looking for a one-night friend, you could strike up a game of pool on one of ten tables, you could even sit down for a long talk with a friend and both get drunk on beer or booze for less than 30 bucks. But, tucked away among the Ms. Pac-Man and the air hockey, a lone Monopoly pinball machine offers something unique. And, as gamers well know, pinball is pretty hard to come by. While you're pumping quarters and flipping nubs at the little metal ball, you might look up at the Monopoly sign and remember friends from days past with whom you played that game. You might recall how much you liked to be the shoe or the thimble, how nice it was to collect $200 as you passed go, or how hard you bilked your friends when they landed on your Park Place with a hotel. Ah, the good old days. Then you can amble back to the bar, crack a cold one, and wonder what they're doing now. 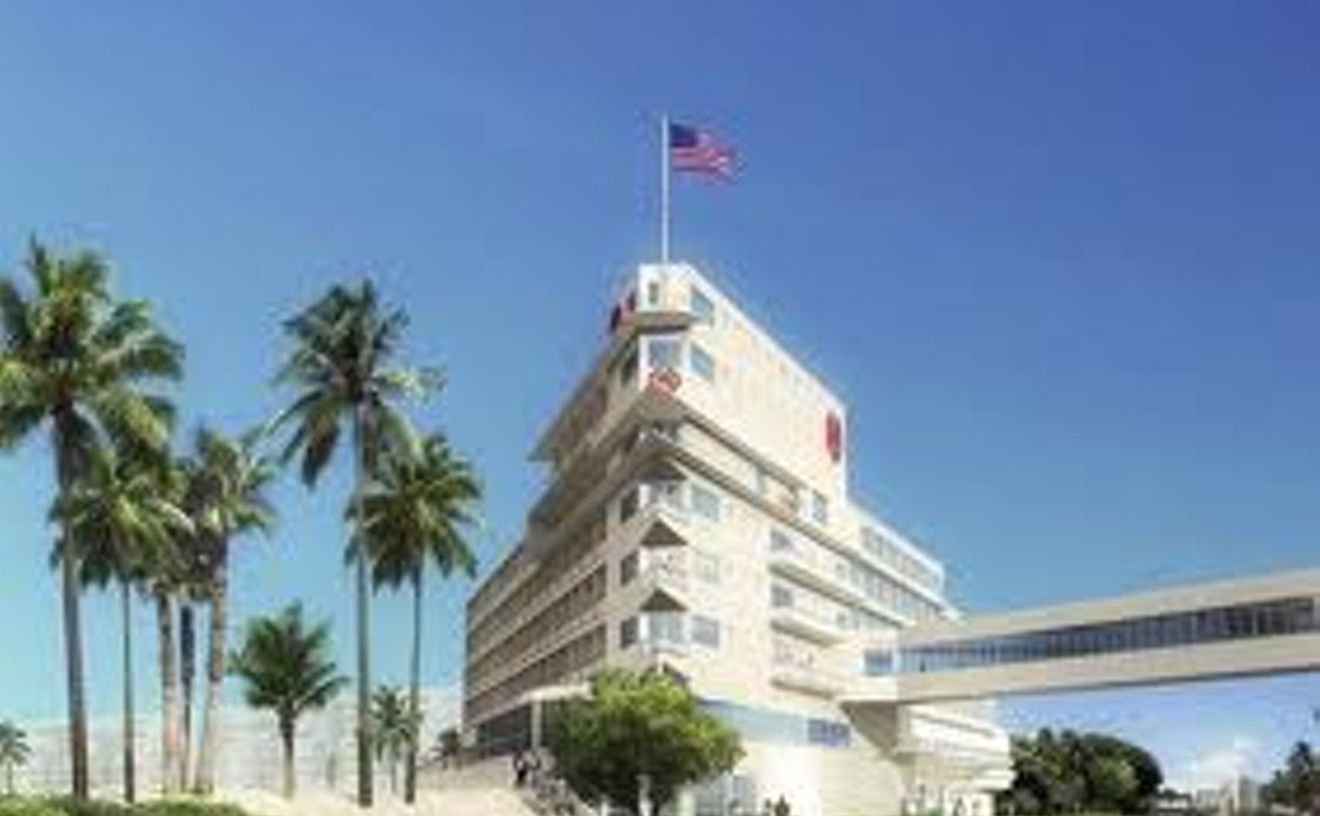 This wood-beamed bar in the lobby of the Yankee Clipper resembles the galley of a large ship. But the sea life that swims past the large window behind the bar is not the kind you'd find at the bottom of the ocean. Not even close. It's people, which is less shocking than, say, finding out that Soylent Green is people. But it's still pretty interesting to watch the human form wriggle in a foreign medium while you suck down one of the bar's daily signature cocktail specials ($5.50), like the Wreck Blue Waters with vodka, blue curacao, triple sec, and sour mix. The Wreck Bar is open daily from 11:30 a.m. to 1:30 a.m. and closes at 2:30 a.m. on Saturdays. Live Jimmy Buffett-style music Thursday through Saturday brings the chill, poolside ambience right over the top.