It doesn't take long for international ex-pats in South Florida to congregate with their own kind: Uruguayans have their clubs, Panamanians their hairdressers, Haitians their takeout restaurants, Poles their Friday-night dances. And the French have their bakeries. At Croissan'Time, you know you're in the right vicinity not just by the unmistakable scent of warm, layered pastry but from the recognizable buzz of French-speaking customers crammed together over tables crowded with beignet and brioche. Owner Bernard Casse opened Croissan'Time in 1986 after a string of apprenticeships and baking gigs in France and New York, including La Grenouille and Regine's. Locally, he wowed the Palm Beach crowd with delectable confections at the Little French Bakery before moving to Lauderdale. Casse and crew are still turning out hundreds of filled and plain croissants daily, hot from the ovens every couple of hours. You'll recognize chocolate or almond paste-filled varieties, but you may never have experienced the guilty pleasure of croissants stuffed with sour apricots and custard, tart raspberries, silky prunes, or walnuts, apples, strawberries, cinnamon, ham and cheese, or guava ($1.25 small, $2.25 large). They're flaky, buttery, each better than the next, and impossible to tire of. But if you're still craving variety, try the coffeecakes, the tourtes, a selection of charcuterie that includes mergez and boudin noir, game meats like pheasant and partridge, homemade ice creams, freshly cut cheeses, paté sandwiches, bacon bread, cream puffs -- a short, delicious tour of French gastronomy for any Lauderdalian who loves Paris.

If heaven exudes a fragrance, it's the one that awaits when you step into Da Mee Rak. Korean barbecue is the specialty of the day here, with marinated beef, pork, and seafood sizzling and snapping atop each table-top grill. Once you've partaken of this distinct Asian cuisine, you'll wonder why there isn't a K-BBQ joint on every street corner. For first-timers, the best bet is the BBQ for two for $33.95, which includes your choice of three beef, chicken, shrimp, and pork plates. It's served with 12 side dishes -- many of them variations of kimchee, which is vegetables pickled in garlic, red pepper, and ginger. As you nosh on this bounty, the first plate of raw meat grills before you; you can tend it yourself or, if you want to concentrate on eating, leave the work to the skillful wait staff. For the more adventurous, there's beef tongue for $16.95 and marinated conch for $19.95. After you become a regular, try the octopus, eel, and "marinated intestine of cattle." Obviously, it pays to dine here as a group to get a wide tasting of meats. Wine and Korean beer are available for $3 to $4. Reservations are recommended.

The Baguette at Le Petit Pain

An NPR commentator once asked a French chef if he thought the Atkins Diet would ever catch on in France. "Mais non," the chef replied haughtily. "In France, we must eat one pound of bread every day for good health." No doubt for other reasons of vigor and well-being, that pound of bread must also be slathered with sweet cream butter, n'est-ce pas? And washed down with just a cup or two of hot chocolate to aid the digestion? The baguette ($2.50) at Le Petit Pain is the place to start if you're planning to follow the good chef's advice: the long, thin loaves, crunchy and buttery on the outside, pocked with delicate holes when you break them open, come warm from the oven a couple of times a day. The proprietors, a handsome and charming family hailing from Paris, have evidently picked up a few baking skills in their native country that have translated exquisitely to ours. They serve the finest from the baguettes, which have an unsettling tendency to become as necessary to daily existence as air, to their beautiful cakes, pies, butter cookies, fresh croissants, and filled crepes -- also highly nourishing when eaten in quantity.

Quick, name your favorite Filipino dish. If you're stumped for a response (roasted poodle is not an answer), it's time to go back to foodie boot camp for a refresher course in delicacies like dinguan and bulalo, the national dish of the Philippines. The outré ingredients of Filipino cooking have been denigrated by some, and you may have to screw up your courage as you scan the menu at Pegasus Pinoy. But if entrées like pork cooked in pork blood ($6.50) and deep-fried pork belly ($6.95) don't satisfy your yen for authenticity, nothing will. In fact, as exotic as it may sound to cook a beef stew of coconut milk, onions, bell peppers, green peas, and olives, one taste of kalderetang baka ($7.50) makes you wonder why you haven't been whipping up a pot of the stuff every Sunday morning. Even the wildest dishes are tamed by the spicy, sweet, and sour dipping sauces -- like one made from vinegar, sugar, and liver paste. Real men eat daing na bangu, grilled milkfish marinated in vinegar, garlic, pepper, and salt. But even the faint of heart will tremble with anticipation when a plate of peppery pancit guisado ($6.95) -- wheat noodles with sautéed shrimp garnished with julienned carrots, celery, cabbage, and green beans -- is put down in front of them.

This market guarantees that its fruits and vegetables were picked within 48 hours of the time they were laid before your eyes here. And like the shingle says, it's all 100 percent organic. The market is open all day Sunday, and it pays to be early to beat the crowds and swoop up items that grow more scarce toward the end of their season. There's no guarantee you'll find the same items from week to week, because the market relies much on Florida's growing seasons. During winter, the bounty is spectacular, from the routine to the exotic. For $3.99 a pound, pick up crispy red and yellow peppers, fresh garlic, pungent parsley, or exotic dandelion greens. You'll find Josh's on the Broadwalk behind the old Hollywood Beach Hotel, which is just south of Hollywood Boulevard.

Though the raw (and cooked, for that matter) fish is stellar, Kiko is best-known as perhaps the region's finest -- only? -- country-style Japanese restaurant. Instead of the flashy, neon-drenched techno-meal you'd find in the hip sections of Tokyo, this clean, bright space in the Fountains Center offers food you'd discover a farmer serving to guests in the old country. Ramen and other noodle dishes are outstanding, as is the deep-fried pork cutlet with panko breading ($13.95), a true comfort food. Try nabemono, with vegetables cooked together in a clay pot, or yakimono, with various samplings of meats or seafood in different sauces. The provincial fare is heartier and less delicate than what Westerners are used to -- some of the menu is a rather radical departure from our usual strip-mall sushi spots -- but it's authentic and served with artistic flair in a Zen-like realm. Kelp salad, brown rice, and tofu galore set Kiko apart, but on those rare, cold and rainy subtropical days, nothing warms body and soul like a steaming hot bowl of udon soup with fat, chewy noodles, Japanese cabbage, and big chunks of chicken (starting at $6.95).

On his first trip to Rorabeck's, my true love brought to me: 12 yellow onions, 11 sweet potatoes, ten heads of lettuce, nine ripe tomatoes, eight colored peppers, seven fat zucchinis, six Chinese eggplants -- fiiiiiiive finger-lings. Four sprawling herbs, three tan yams, two garlic cloves, and the chaaaange from a twe-e-enty. It goes without saying that my beloved made a few more trips to Rorabeck's, still flush with his astonishing success. I sent him out for a nine-foot potted palm tree ($50), a bucket of jalapeño peppers ($1), two bags full of bronze and black muscadine grapes ($5), a flat of Florida strawberries ($4), some flowering impatiens ($1.50 each), an obscenely sized watermelon ($3), half a dozen Georgia peaches ($2), a gigantic bunch of basil ($1), and a couple more of those giant zucchinis, roughly the size of Paul Bunyan's forearm, which I needed to whip up a vat of ratatouille for my true love and his extended family.

The latest relentlessly trumpeted diet plan? To stay chic and slender as any Frenchwoman, you have to eat like one. And that plate of escargots with mushrooms, garlic cream sauce, and chives, the one that promises to melt away unwanted pounds like magic, is waiting for you at 4-year-old Brasserie La Cigale. Executive Chef Farid Oualidi turns out classic retro dishes like sole meunière ($34), caesar salad, cuisses de grenouilles (frog legs, $11 -- sounds better in French, doesn't it?), and the euphoniously euphemistic "sweetbreads" ($10). These elegant dishes are balanced with subtle butter,- wine-, shallot-, and cream-laden sauces of great art and complexity. And if all this sounds a bit rich, consider that Cigale's canards are served in a setting so cozy, relaxed, and unpretentious that you could be tucking into a plate of Julia's very own moules (may that blessed lady be forever sautéeing chickens in heaven). "Life itself is the proper binge," Mrs. Child once said. Bien sur, even better if life contains plenty of foie gras with black currant sauce.

Baja Smoothie Café may not have 10 gazillion trademarked flavors like those giant-blender joints, but it's pretty damned close. Besides -- is anyone anal-retentive enough to need ten different strawberry-flavored blends to choose from? Baja has cooler names for its smoothies anyway, like the Twisted Sister or Bananas for Bono (though it might want to rename the Blue Baja Tsunami before some overly sensitive customer raises a stink). The basic nutritional info is listed for all smoothies (which range in price from $3.95 to $5.25), so you know how many calories, vitamins, carbs, and grams of fat you're ingesting -- and that you're getting more than just a cup of sherbet run through a blender. If you have any leftover room for solid food, the café has plenty of fresh salads and wraps, all made with your calorie count in mind. And check this -- the café has subscription-free wireless Internet service, meaning you don't need to sign up with T-Mobile just to browse the Web for ten minutes. All you gotta do is turn on your laptop and you're on the Web. Damn, all that and all you wanted was a Hawaiian Five OH! 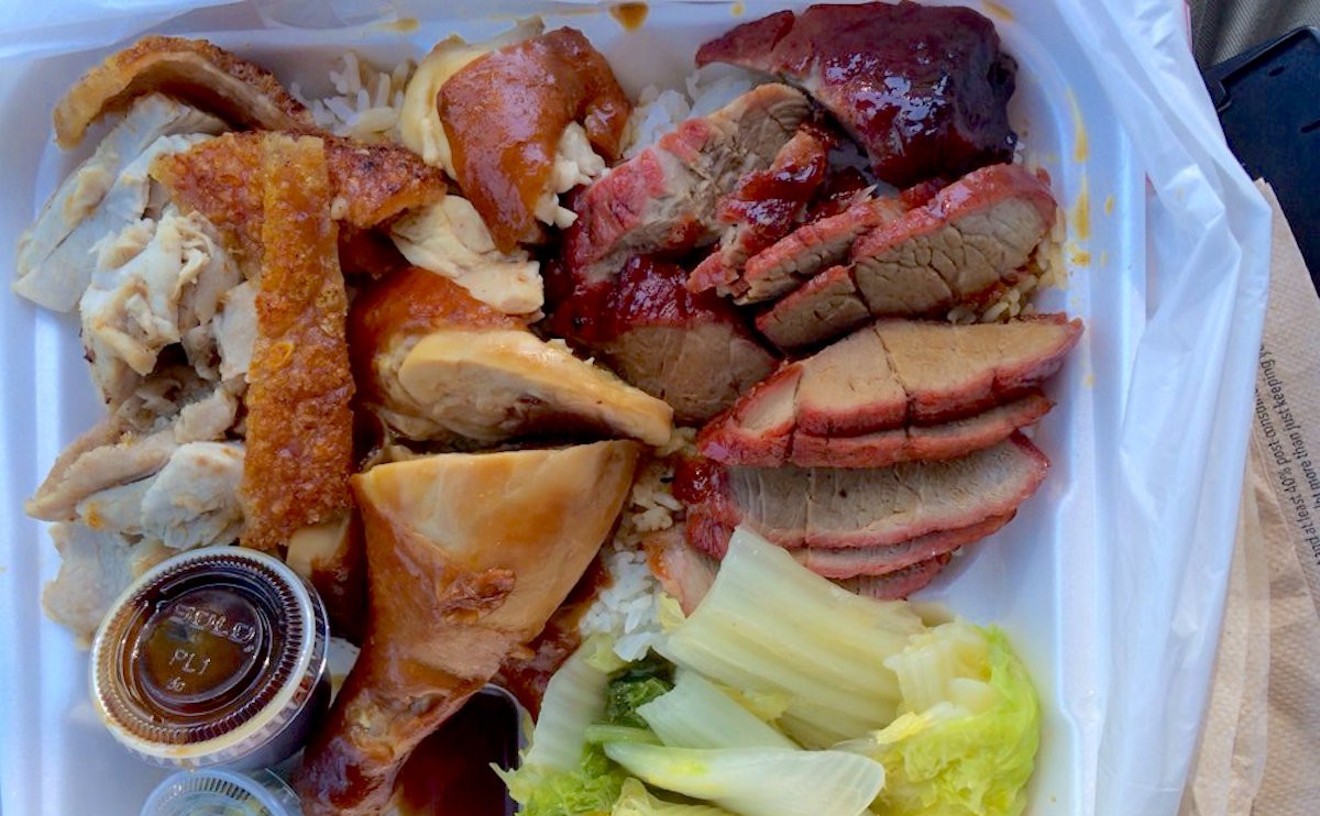 Courtesy of Gou Lou Cheong BBQ
Gou Lou is a fleshy spectacle unmatched elsewhere in Broward. A hole-in-the-wall with only two small tables, the carry-out restaurant devotes most of its space to a behind-glass display of roasted ducks, chickens, and pigs. You'll easily identify the species: Each animal is roasted whole, usually with heads attached. On a recent visit, ducks and chickens hung by their heads or feet, each a shimmering golden brown. A roasted pig dangled from a stainless-steel rack, its crispy head lying below it. On a nearby rack, succulent, deep-red ribs dripped with juices. Your order is chopped to your specifications as you watch. Honey-barbecue ribs or honey-roasted pork cost $6.50 a pound. Roasted ducks are $13.95, or $7.50 for a half. Chicken with head is the bargain of the bunch at $3.75 a pound.