When your business is nightclubs, you want to spend some time in the fresh air. From time to time, you want to stretch out in grassy open space. That's why Larry Wald, owner of Cathode Ray Café, started to gravitate to Fort Lauderdale's Holiday Park, and it's why he became a soccer fan. The park, with 11 playing fields up and running during the season, is home to one of the busiest soccer programs in South Florida. During his park forays, Wald learned to love soccer as a spectator sport. It's not about the teams, he says, but the quality of play. And at Holiday, the quality is good. "It's great to go to the park without following any particular team," he says. "You can't be disappointed. You're just watching it for the game." Wald, who owns not only the gritty gay wi-fi club on Fort Lauderdale's Las Olas Boulevard but also Boulevard Café next door, would rather be at Holiday, assessing a crossing pass than watching the Heat at Triple A. And when the soccer season is over, Wald drifts over to the softball fields or the racquetball courts. "There's enjoyment for everybody," he says. It's a sports spectator's paradise.

Surprised at this choice? Well, before you start looking for somebody to chop block, think about it for a moment. Crowder was a rookie last season, a lowly third-rounder in the 2005 draft. Why so low? There were questions about his character after having a couple of run-ins with the law at the University of Florida. But the only law broken since he left the Gators was theft -- by the Dolphins for getting Crowder as the 70th pick. In the NFL, Crowder has proven to be more than a standup guy. Forced into more playing time after future Hall of Famer Junior Seau was injured, he stepped up big, and his sturdy play helped turn the team around at midseason. By the end of the year, the rookie was second on the team in tackles. At six-foot-two and 245 pounds, Crowder is a dream linebacker, tough as hell and with a nose for the ball that he was born with. Literally. His dad, Randy Crowder, was a defensive lineman for the Dolphins and Bucs back in the 1970s. Look for big things from the Chan man next year.

This is easy. The best Heat player is a guy named Shane. Or is it Dwaq? You know, the scary, 325-pound guy who muscles the ball to the rim like a breaching whale, who also happens to be the high-flying six-foot-four guard who zigzags through opposing defenses like a barracuda in sargasso weed. All right, we equivocate. Shaq or Dwyane? Dwyane or Shaq? One has the Superman shoulders that can carry a team through the rough spots, the other the creative moves and the torrid shot that put fear into the hearts of opponents. The big guy has been notable in his absence this season, missing 18 games with an injury early on while the Heat muddled along at .500. Since Shaq got back, they're a .700-or-better team. Powerful evidence of Shaq preeminence, wouldn't you say? But shouldn't we factor Alonzo Mourning in there? Could O'Neal be anywhere as effective without a Hall of Famer as backup? (Can you say Dwaqzo?) Then there's Wade, the money player, the guy who sells the tickets, keeping the team within striking distance when others are having a bad night, single-handedly winning games with furious fourth-quarter scoring. So we're going to go with the acrobatic Dwyane Wade. Let's just say he's the emotional heart of the team, an inspiration to his compañeros, and, damn, don't even think about going all the way without him. Does this smell of arbitrariness? Hell, yes. And so what?

Cabrera's groupies have put up an Internet fan site that carries this disclaimer: "Everyone in this group is considered Miguel's #1 fan. Please do not argue over it!" The group could include any pro baseball fan in South Florida who watched Cabrera rotate positions with ease during the Marlins' 2003 World Series run and who will watch him perform as the best player on a lousy team in 2006. Stat freaks adore him. He was third in the majors in batting average in 2005. The youngest ever to have back-to-back 30-home-run seasons (Albert Pujols, a future Hall of Famer, was 80 days older). The fourth-youngest to have a 30-homer, 100-RBI season (behind Mel Ott, Al Kaline, and Ted Williams, HOFers all) and youngest to do it while scoring 100 runs. All fine and good, but he wouldn't be here if the kids didn't love him too. Now 23 years old, he looks 16 -- just old enough to drive the SUV he stopped after a game last season when it became clear he was the head of a comet with running children as its tail. You have to wonder about the arguments breaking out at the driver's-side window, over who wanted his autograph most. No matter. He signed and signed.

The Nobody Home League resumed play this year, and unfortunately for the Panthers, the team is still borderline at best. Billboard-ready goalie Roberto Luongo started the year gangbusters, then tapered off to merely good. This is a team that needs a stopper, no doubt, because while scoring is up leaguewide, Florida is mired in the bottom third. Only the six-foot-three, 215-pound Jokinen has proven capable of putting the biscuit in the basket with any regularity. Not only have the Panthers failed to find another offensive threat -- Jokinen is the only Panther among the league's top 50 scorers -- they depend on the center's touch for wins. Of the 22 games in which the baby-faced Finn didn't score or assist on a goal, the Panthers lost... all 22. As if that weren't enough, the 27-year-old captain was quoted earlier this year as saying that his philosophy about opponents once he gets a lead is to "break their necks." Exactly the guy you want taking your face-off.

The Heat has demonstrated once again that all a team needs to win in the NBA is two superstars and about six or eight warm, giant bodies to fill floor space. That formula almost took the Heat to its first finals appearance last summer, until a couple of dippy plays and Dwyane Wade's hurt ribs kept them from knocking off the defending champion Pistons. Most general managers would have locked in the principals from the club's best-ever team, but not Pat Riley. Out went Keyon Dooling, Damon Jones, Eddie Jones, and Rasual Butler. In came Gary Payton, Antoine Walker, Jason Williams, and James Posey. Now, Posey's a no-frills workman and fine to have aboard. Payton, Walker, and Williams are all oversized niche talents (Payton, once upon a time as a defender; Walker, making baskets; Williams, handling the ball like a yo-yo). They're also recovering malcontents, every one. Along with Alonzo Mourning, then, Wade and Shaquille O'Neal have an all-hothead supporting cast. Will the Heat win a title? The team is among a half-dozen teams who have a legitimate shot. Even if it doesn't, this playoff meltdown should be nothing short of nuclear, a guilty joy to behold.

It took about five seconds last August for Hermida to go from anonymous rookie to the answer to a trivia question: Who was the first player since the 19th Century to hit a grand slam in his first big-league at-bat? The six-foot-four outfielder was the 11th overall pick out of high school in the 2002 draft and was considered the Marlins' best hitting prospect even before his right-field grand slam made a game of an eventual 10-5 loss to the Cardinals. That dinger gave him a perfect 4.000 slugging average to start his career. Naturally, it was all downhill from there, but not too far; his season total of .634 was second in the bigs for players with at least 25 at-bats. He finished with a .293 average in 41 at-bats, with four home runs and two doubles among his 12 hits, a ridiculous amount of power for a guy who at the time was just 21 years old. For a team that jettisoned nearly all its big bats in the offseason, Hermida's emergence has been nothing short of grand.

While Florida Atlantic University sinks millions of dollars into a losing football team, fans have overlooked the school's best athlete, who doesn't put on shoulder pads or a helmet. (Well, except when he's batting.) Mickey Storey, FAU's hotshot pitcher, graduated from Deerfield Beach High School with more than 300 strikeouts and a career record of 22-7. Since the Owls snatched him up, he's kept improving. In his freshman year, Storey was named Collegiate Baseball's Pitcher of the Year, was chosen as a preseason All-American, and got named to Baseball America's All Freshmen Team. So what earned him all these honors? Well, he went 10-1 with an earned run average of 1.70, the lowest ERA the school has ever seen. The scary thing is, he's still improving. But already, he's written his name in the history books as FAU's greatest athlete.

He's a six-foot-nine forward but can handle the ball like a point guard. He helped lead the University of Kentucky to a national championship in 1996. His hands are about as quick as anybody's in the NBA. He's played on the All-Star team and averaged nearly 20 points a game in a nine-year career. Yet Walker couldn't find the basket for much of the season after the Miami Heat picked him up from Boston in the offseason. Often, he has looked like some brain-damaged insect, dashing around like mad before inevitably clunking the ball off the rim. You just knew he was going to miss, no matter whether he was under the basket or behind the three-point line. He fills fans with dread every time he touches the ball, like watching a manic-depressive on reality TV. But there's a great player lurking somewhere under Walker's big bald dome -- and you can only hope it comes out of hiding during the playoffs.

God help us, but this Miami Herald writer makes us laugh every now and then. And that's a lot more than you can say for most of the humorless sportswriting corps in South Florida. Mixed in his comic "Random Evidence of a Cluttered Mind" columns are the occasional gems that remind us of that other funny Herald guy, the semiretired Dave Barry. Take this snippet: "The Heat's stirring victory over Detroit renewed sagging championship hopes. Experts say the key for Miami from here on in will be Dwyane Wade averaging 17 points in the fourth quarter." Or this small riff on Olympic downhill skier Bode Miller, from the same column: "Speaking of Miller, his disappointing fifth-place finish in the first downhill race is being blamed on unexpected sobriety." For every one of Cote's pieces of beauty, there's an equally bad groaner. At times, he seems to channel the worst lounge comics in America's history. But the good outweighs the bad, and, all in all, he's a minor local treasure. 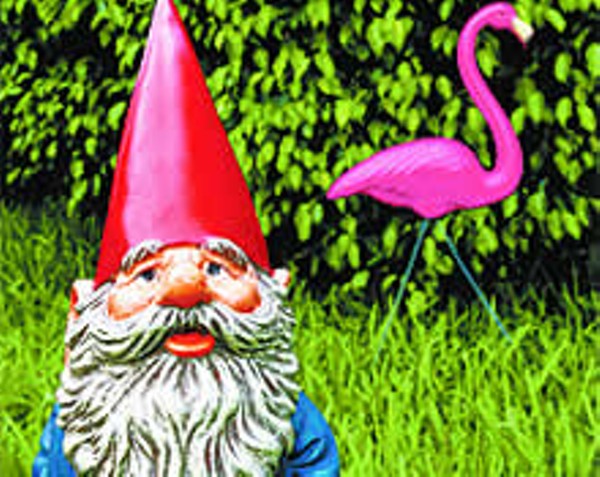