Best Place to Stumble Off a Boat for a Meal 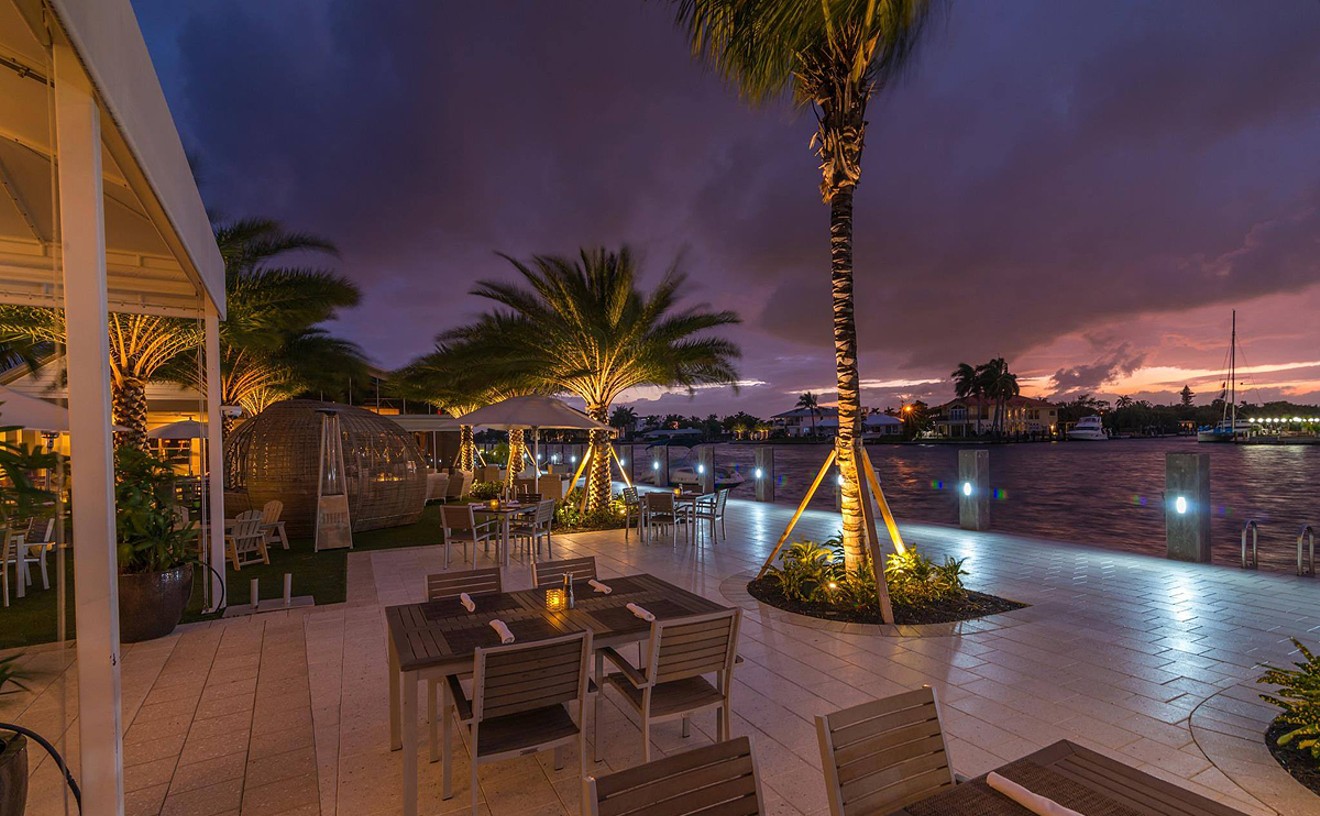 Chaz: Let's take my baby out for a spin this weekend.

Jackson: No man, it's my turn.

Blake: Aw shucks, fellas, how am I ever gonna pick up babes if I'm cruising the Intracoastal in my buddies' boats? Let's take mine!

Life is indeed rough in the "Venice of America," especially when you and all your friends own yachts. But fear not, well-heeled one. Shooters has space to dock your 25-footer. Their dockmaster even takes reservations and offers valet service. The best part? Everyone at the café gets to see you walk off your very own boat. Chicks will be swarming!

Best Place When Someone Else is Paying

When we rope a high-roller, we make them take us to Rachel's, where we end up with more filet and filly than we know what to do with. In fact, we have buddies we cultivate for nothing so much as their willingness to let us tag along and share their strip (New York), their tail (lobster), their hot potatoes, their creamed spinach, and the gaggle of lovelies that materialize whenever VIPs come through the door. The fun at Rachel's is as bottomless as the dancers, and the ATM situated conveniently at the entrance; the night as endless as a loop of "Me So Horny" — Rachel's serves dinner with a side of booty and late breakfast until 1:30 a.m., and it serves drinks until 4 on weekends. The ladies are tireless in their attentions. By the time your pal's bankroll gives out — "Sir, we're sure the ATM is not broken" — you won't remember a thing." 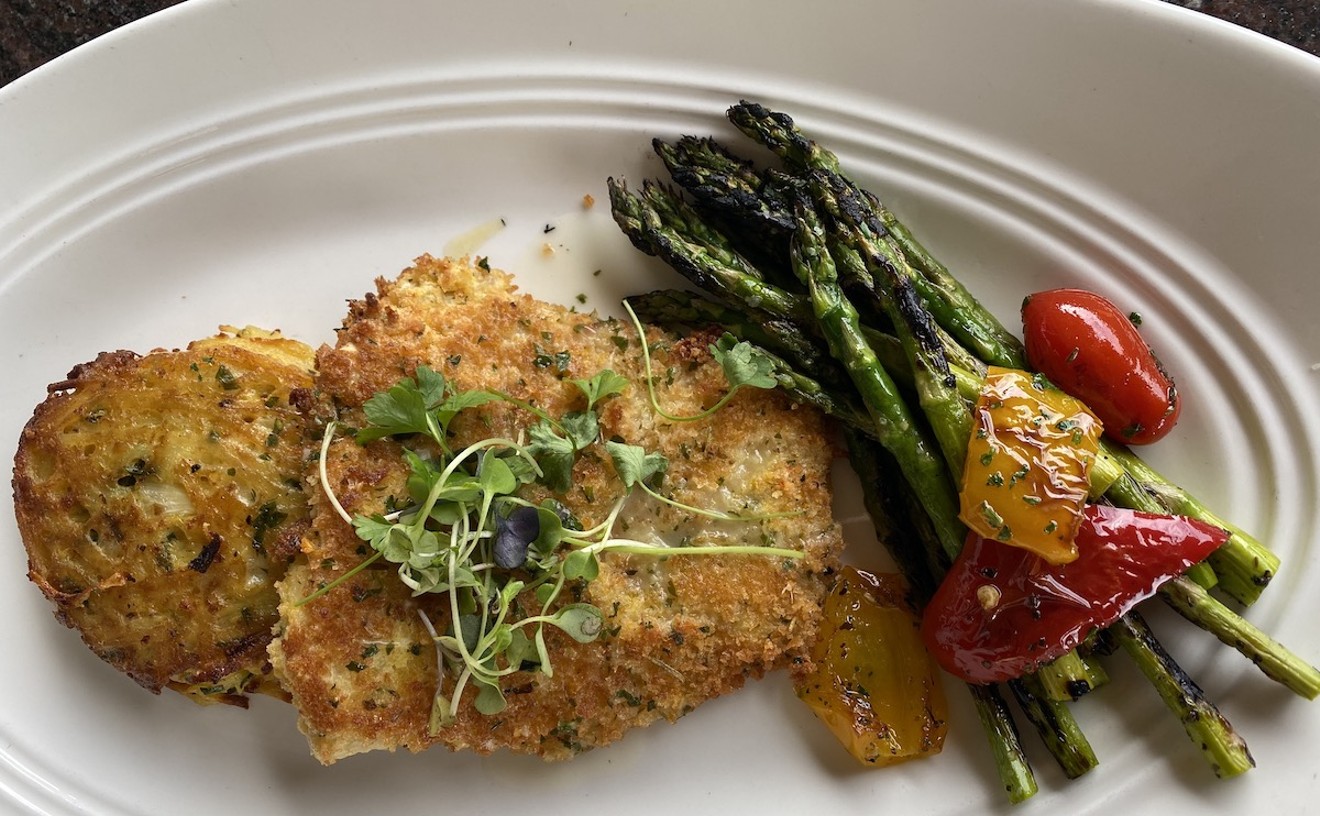 Photo courtesy of Mustard Seed Bistro
Consider for a moment the potato chip. This forgettable culinary staple dresses the side of many a lunch plate, but more often than not it's hastily exchanged for coleslaw or the more health-conscious fruit salad. But at the Grapevine Gourmet, the potato chip has been elevated to an art form. Order any of the artfully prepared sandwiches at this West Broward lunch spot and they'll be accompanied by a cascade of potato perfection you'd be a fool to turn away. The secret is in the waffle-cut — it's what makes the Grapevine's frites so uniformly crisp, yet at the same time as light and airy as a starch-enhanced cloud. The cut also works to wick away excess oil, so you end up tasting potato, not fry-o-lator. Just one helping of these bad boys and you'll be hitting up the take-away counter on your way out the door, buying 'em up by the bagful (at only $5 per pound) for further adventures in chipland. 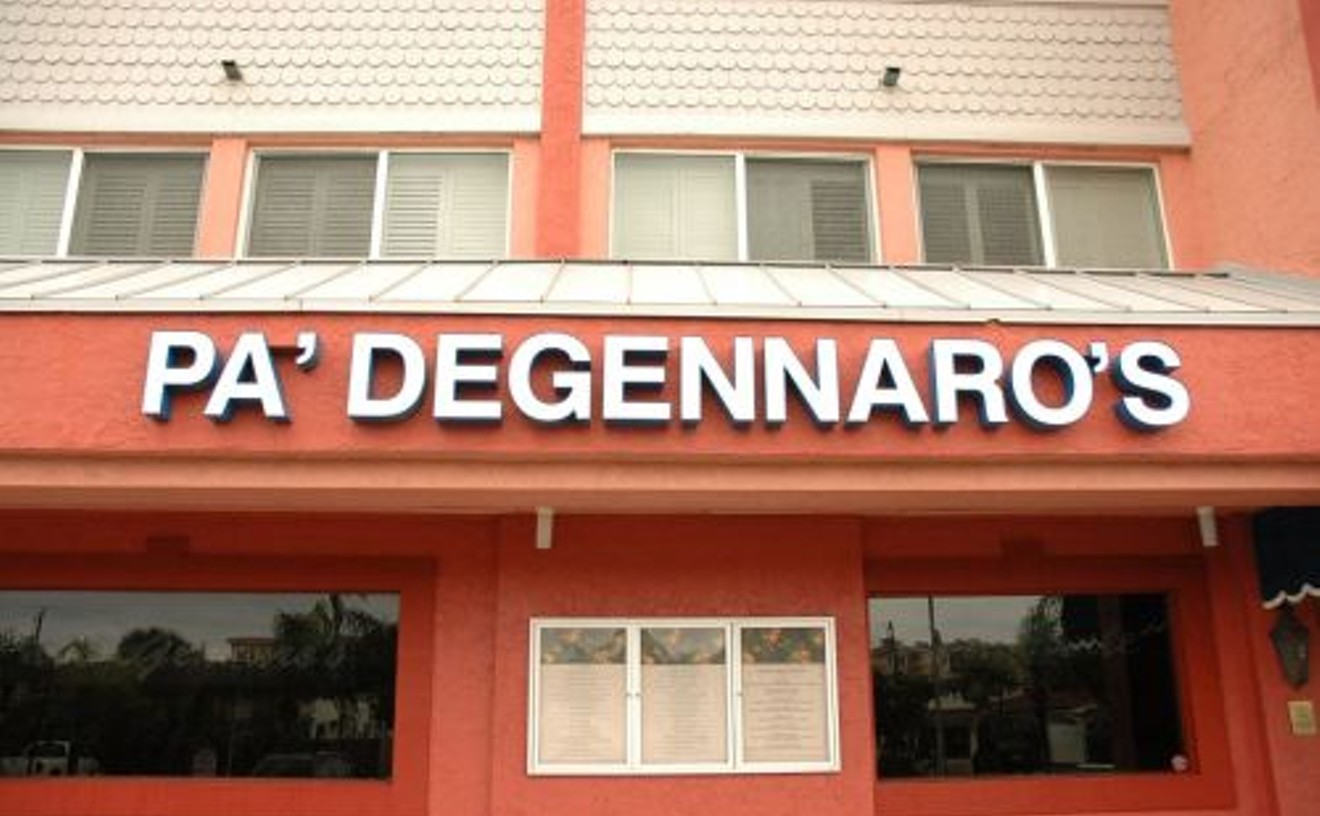 The only relationship Pa' deGennaro's deli has to the Italian restaurant of the same name next door is proximity. The "deli" — if you're thinking tongue sandwiches, forget it — is run by a Swiss guy named Ulrich Koepf, who apparently got the idea somewhere that when Americans think "take out," they think "pumpkin seed crusted salmon with five spiced sweet potato mash and mango citrus sauce." Actually, Koepf has been around SoFla for quite a while running upscale restaurants like Bistro Mezzaluna and Café Picasso; now he's brought his culinary talents to bear on food made specifically to be carried home in a paper bag and reheated, so that you and your paramour can have a romantic, candlelit dinner à deux without the butter in your hair (unless you want to get up to that sort of thing deliberately). On a Friday night, for example, you can haul home lamb shank braised in Rioja sauce, the catch of the day, a whole rotisserie chicken "herbs de Provence," or a seafood bisque with chives; on Saturday an osso bucco; and the following Monday, chicken Scarpiello with an array of scrumptious side dishes. The place also sells the wine with which to pair these feasts, of course. Sure beats the hell out of chop suey. 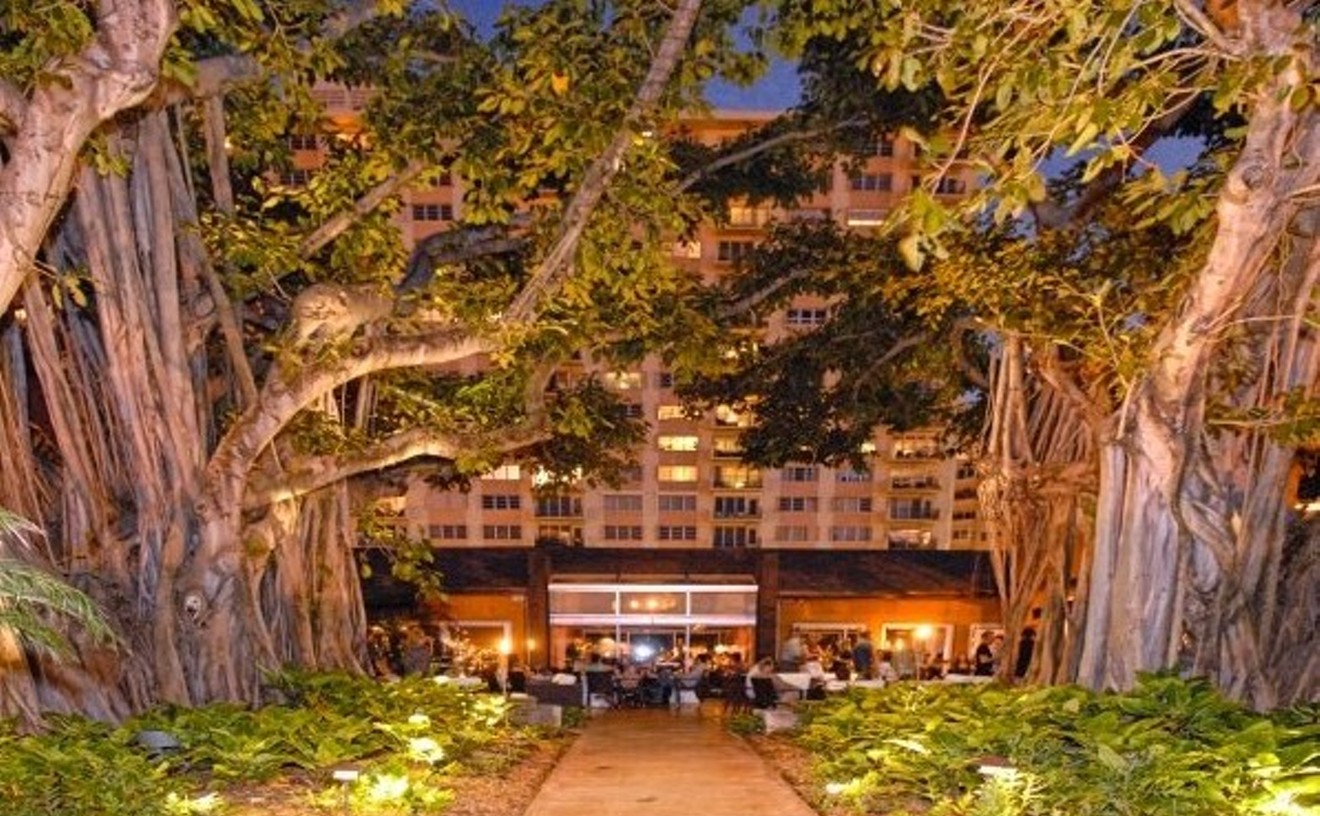 Brazilian steakhouses have fantastic salad bars. Seriously. Between the hearts of palm, array of cheeses, and various salads, pretty much any vegetarian can walk away from a meal more than satisfied. But if those skewers of beef that keep passing by seem at all appealing, this is the place to order up some meat and go out with a bang. Leave the world of rabbit food behind. After the server carves off a slab of juicy top sirloin, you can dive into the pork ribs, followed by some lamb, chicken, and sausage. Go whole hog! While a rodizio in Brazil might lead you into totally uncharted territory — think grilled chicken hearts — this stateside feast will help you ease back into life as a carnivore.

Paula Palakawong and Ravin Nakjaroen have designed a brilliantly soothing space to showcase their menu of new Thai cuisine at the Four Rivers, one of the dreamiest rooms you'll ever set foot in. Forget an afternoon at the spa, a meal at the Four Rivers will do more to lower your heart rate and blood pressure and induce beta waves than a month of massages. Raised pools are a lucent canvas for floating candles and water plants; a wall of lotus flowers showcases each single stem in its own pristine, uplit vase; on another wall, Buddhist poetry worked in bas relief makes a kind of intuitive sense as design, even if the strange curling script is illegible. You sink into buttery leather on the banquettes, note the whorl of the wood grain in the polished tables and the solid geometric shapes of the tableware, and begin to appreciate detail again. A veil of darkness has been laid over everything, occasionally punctuated by shocks of luminosity, like a low-volume conversation between light and dark, presence and absence, here and there.

Best Restaurant for a Double Date 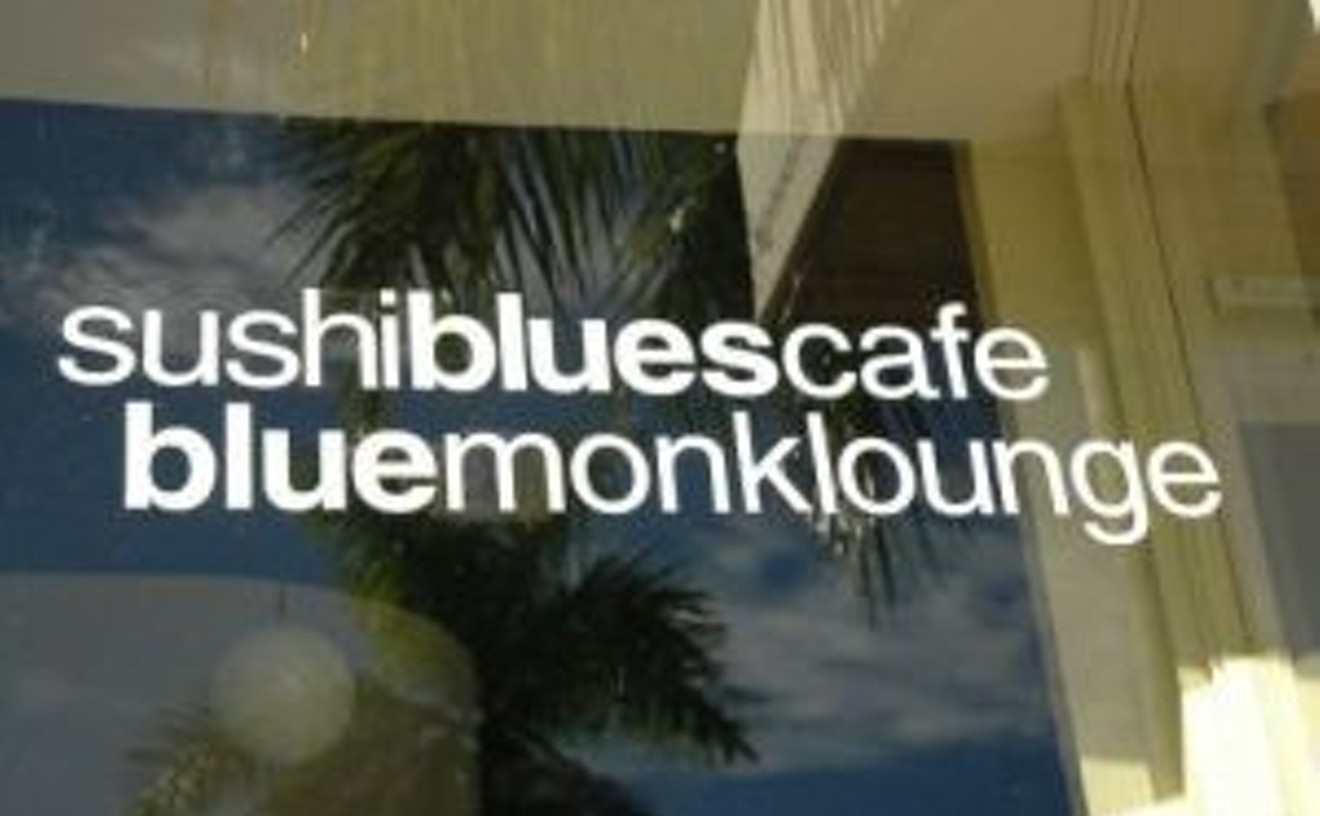 "So how did you meet? During a liposuction appointment? How sweet. And you say you were married? Oh, I'm sorry: you're still married — but you two share a deep connection that needs to be explored. Right, I understand. Do we what? Swing? Oh, no — I mean, we aren't ones to judge or anything like that, but we also don't blow other couples. Thank you for the offer." Double dates can be awkward, but there are a few ways to troubleshoot tricky situations. Pick a restaurant with an exquisite menu: At Sushi Blues and Blue Monk Lounge, you know that whether you go for the sweet potato French fries, the special roll of the day, or any of the delicious noodle dishes, you're going to wind up with something worth raving about, and so will everyone else at your table. You also want to select a place with ambiance: This is where the Blue Monk half comes in; on Friday and Saturday nights, session cats populate Blue's inside stage under the direction of jazz musician Kenny Millions. If conversation gets thin, just redirect your gaze to the stage. Or better, get up and dance. There's also excellent people-watching through the oversized front windows; you'll see the best of downtown Hollywood right from your table. To break the tension, you'll want booze: Sushi Blues not only has a full liquor bar, its staff knows how to use it so well that you won't even notice that the other couple has been talking about their cats for the last 30 minutes.

Rainforest Café has been at Sawgrass Mills for more than a decade, but for tykes and the young at heart, the restaurant's gimmicks still seem fresh. Lightning flashes. Thunder cracks. A thin mist wafts. Monkeys chatter. Drums beat out an African rhythm. It's all simulated, of course, but there's enough going on to keep even the squirmiest children amused long enough to eat a meal. The Disney-esque animals are naturally a big hit with the little ones: Thanks to animatronics, a python wiggles, a larger-than-life butterfly flaps its wings, and an elephant charges through the brush. The menu is amusing, too: For kids there are items like "Jurassic Chicken Tidbits," which are dinosaur-shaped nuggets, while for weary moms and dads there are signature cocktails like the Tropical Toucan and the Margarilla and an enormous selection of dishes from appetizers to desserts. For those searching for extra sensory stimulation, on Wednesday evenings kids can get balloon animals, get their faces painted, and hang with a guy in a green tree-frog costume.

Cero at the St. Regis

A view of the water from a restaurant terrace usually guarantees lackluster food. Not so at Cero at the St. Regis, where the breezes wafting from the Atlantic across the street seem to have inspired chef Toby Joseph and pastry chef Jordi Panisello to create dishes so fresh, airy, and temperate you almost feel you're inhaling rather than swallowing. Begin with something raw: ginger marinated escolar, a plate of bluefin and hamachi sashimi with jalapeño gelée and wasabi rice foam, a half dozen kumamoto oysters with red onion confit, or, if you're feeling super swell, a selection from a caviar menu featuring Russian, Iranian, Italian, and American eggs by the ounce (break open the piggy bank: recommended champagnes to accompany the caviar run from $240 to $780 a bottle). Yessir, this is a special-occasion place, so pull on that bespoke suit and your best cravat. Your tab will be stiff but so will your martini, and by the time you've worked your way through mirin-poached Maine lobster, line-caught swordfish, foie gras-crusted halibut, or beef short ribs paired with diver scallops (Joseph is fanatical about choosing his scallops), and a couple of Panisello's tour de force desserts, you'll be feeling like you and your doll are worth any extravagance.

It's probably no coincidence that two of our choices for best restaurants this year, Cero and Solu, are brought to us by the same outfit: Starwood Hotels and Resorts. Starwood evidently doesn't fool around when it comes to hiring terrific chefs and giving them the resources to make culinary magic — not to mention a fantastical setting to dish it up in. The Resort at Singer Island is magic; what looks like one more dull tower on the outside reveals an interior of swirling color and swooping forms, of striated woods and vanilla cream banquettes, of rooms so luscious you hardly need to eat anything to feel utterly done in. But you will eat, because chef Carlos Jorge has put together a menu of Asian and Caribbean-inspired haute cuisine as sparkling as the polished windows overlooking the sea, as brilliant as the uplighting that makes everybody look so gorgeous. A salad of slivered kobe beef with watercress, daikon, peanuts, and cucumber is a sophisticated joke on Thai yum nua; Jorge plays similar tongue-in-chic games with crab Rangoon, potstickers, and spring rolls. Entrées gather a basket of island ingredients such as jicama, coconut, boniato, ancho chilies, sweet potatoes, and tamarind to dress up steaks, chops, and fillets of snapper and branzino. Sunday brunch, with its endless ocean views, is a more affordable knockout: try the Solu crab benedict.