Banish from your mind those newfangled "martinis" sold in the trendy bars by unscrupulous mixologists. You know the ones. Their active ingredient is vodka, and all kinds of weak boozes have been added to the mix to make them taste like Key Lime Pie or an espresso or an Almond Joy. These drinks are often pretty, and they are often tasty. But they are only "martinis," never martinis. A real martini is a pre-Prohibition gin drink with an unapologetically booze-ish flavor. To try one, go to href="http://bovaristorante.com/">Bova Prime on Las Olas, for there they serve a mighty example of the form. Bova is as upscale as any restaurant on the boulevard — a full meal, plus cocktails, could easily run you $100 — but you'll feel as dapper and happy as any diner if you stop by for just a single Hendrick's martini. Yes, they've got Hendrick's — that wonderfully crisp, cucumber-infused gin in the thick black bottle that looks like it came from an old-world archaeological excavation. They serve it diluted with just a tiny bit of ice water from the cocktail shaker, which emphasizes and excites the gin's rose-petal overtones till they seem to skitter across the tongue. Order mostly dry with a cucumber garnish and discover how good booze can taste when it's not busy tasting like something else. 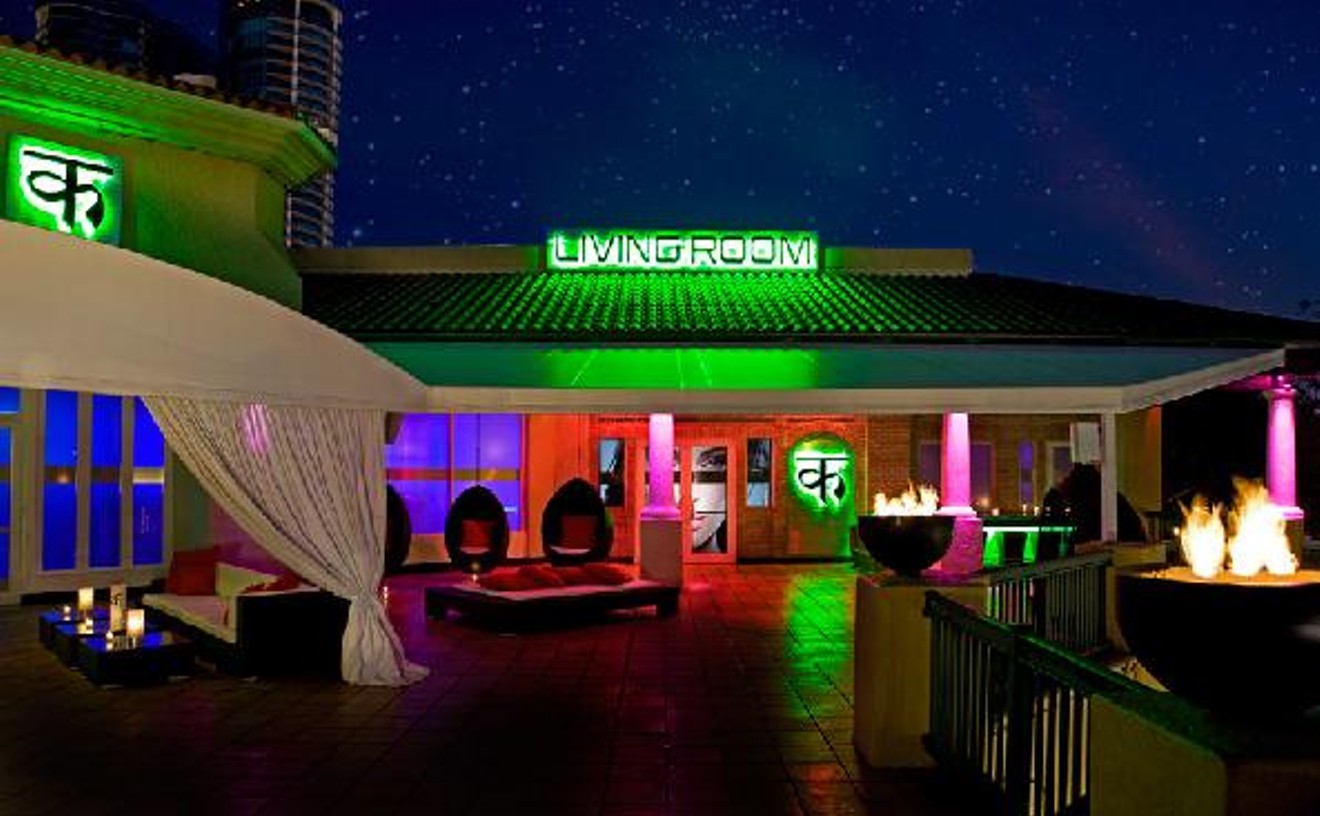 Calling the Living Room a "bar" is like calling a McLaren F1 a "vehicle" or calling Jackson Pollock "messy." Really, just trying to describe a place this chic and transcendentally futuristic with regular sentences seems inadequate. On a typical Saturday night, you might find a red room full of heated bodies, pumping chest-to-chest to the music; a purple room that seems as relaxed as an opium den; and an open-air patio full of beautiful people looking for the right person to go home with. The architecture and design blend water, flowing scented air, shifting colors, and the urban landscape to confuse your senses and open your mind. The place turns your typical evening out into a serene, poetic experience. The only problem: When you awake from this dream, you have to walk back through the rest of Riverfront to find your car. 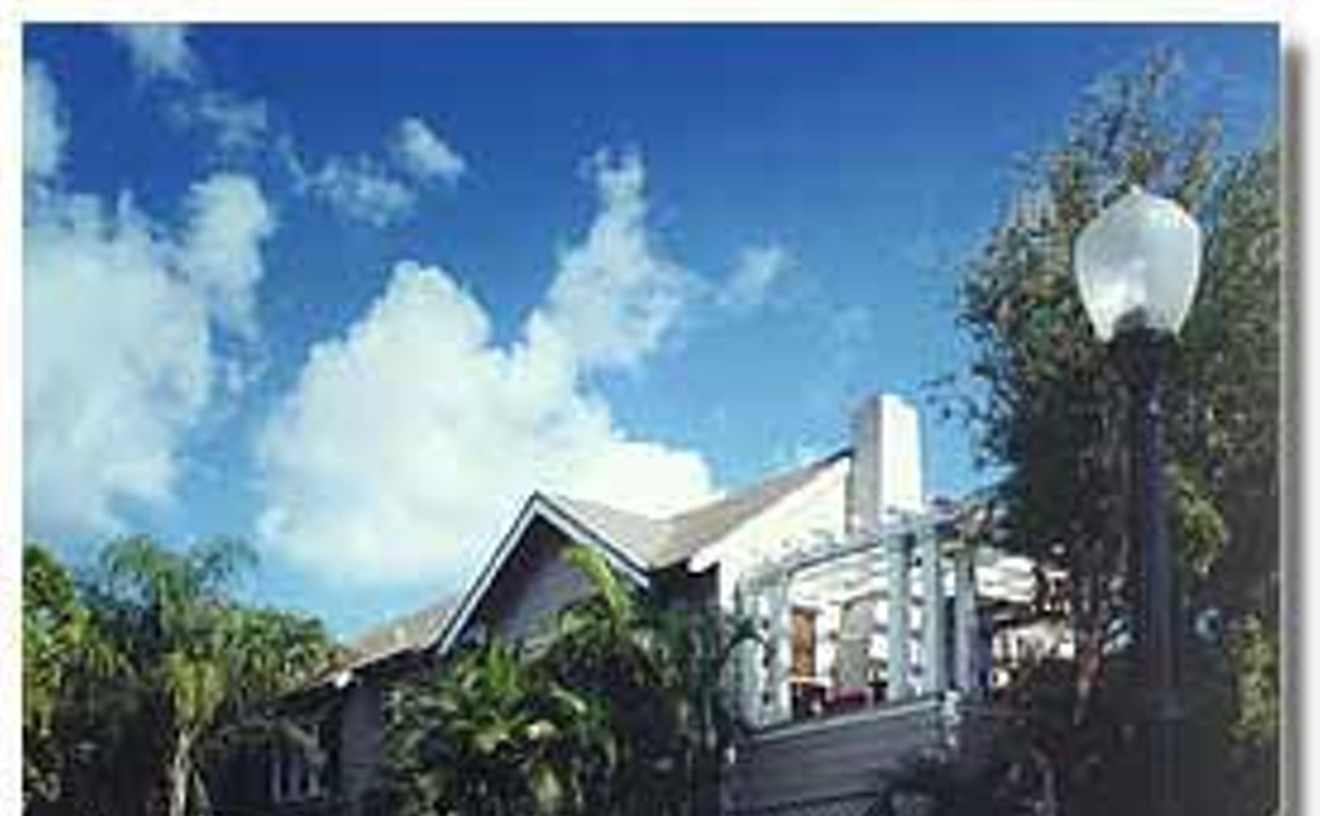 We're a few hours into a happy hour at this perfect tropical garden when somebody brings up the idea of going someplace else for dinner. Sure, we all probably need something to soak up hours' worth of alcohol, but nobody likes the idea of leaving a place that feels like an ideal Old Florida backyard. Tables and chairs are scattered across a patio amid tiki torches, a fountain, and tropical fauna, all comfortably spaced out to give groups of drinkers their room. At the full bar nearby, the friendly bartender overhears our dilemma about dinner and offers, "Why don't you just order in? Pizza Girls delivers." Brilliant idea, sir. Before we finish off — what was it? — a fourth round or so, a few boxes of steaming pizza pies arrive from nearby Clematis Street. The guests here — this is a B&B, after all — have probably long gone to bed by the time we ask for the check, which always seems to be missing a few rounds. We join the crowd outside passing between Clematis and CityPlace and then head home, envious of those smart enough to book a room at href="http://hibiscushouse.com/">Hibiscus House who will in a few short hours wake up to a slice of Florida as comfortable as any backyard paradise can get. 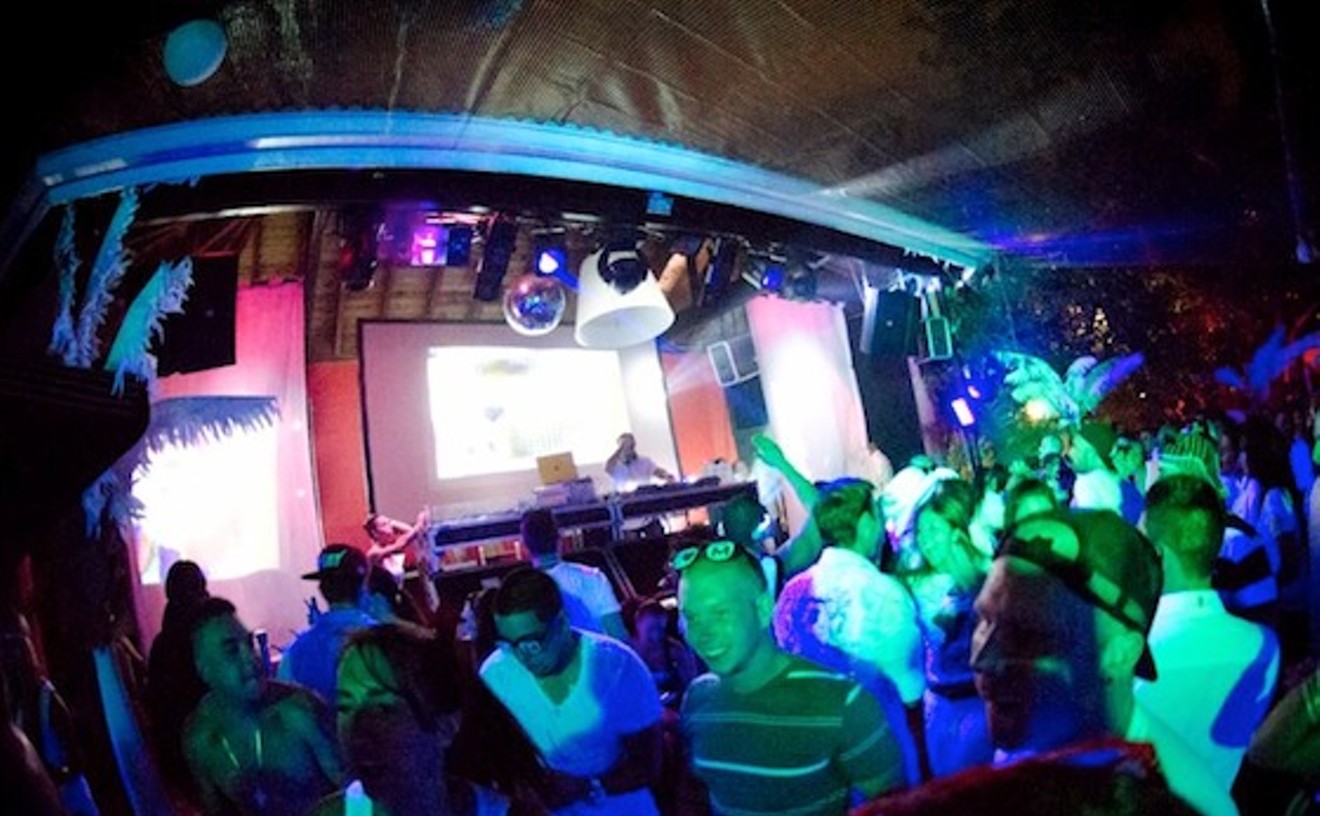 It took the nightlife dream team of Cleve Mash and Rodney Mayo — the guys behind Monkey Club, Respectable Street, Lost Weekend, Dada, and more — to (finally!) make it worth going out dancing again on Clematis. Two things establish Monarchy as a dance club that seems plopped out of South Beach. First, it boasts a top-of-the-line sound system blasting modern club bangers — there's no lame Top 40 playlists and no tired '80s nights here. And second, the décor is both campy and sexy. The theme is very French Revolution, as though the riff-raff just broke into the castle, ousted the king, and turned up the stereo. Brocade wallpaper is ripped in places to reveal a concrete wall underneath, chandeliers shake with every electro thump, and in-house dancers exuberantly make their way through the crowd in tight bodices and curly white wigs, like 18th-century courtesans gone wild. This is the party palace the bourgeoisie has been waiting for — where the beats are deafening, the dance floor is slammed, and the vibe is downright decadent.

Best Place to Get Drunk 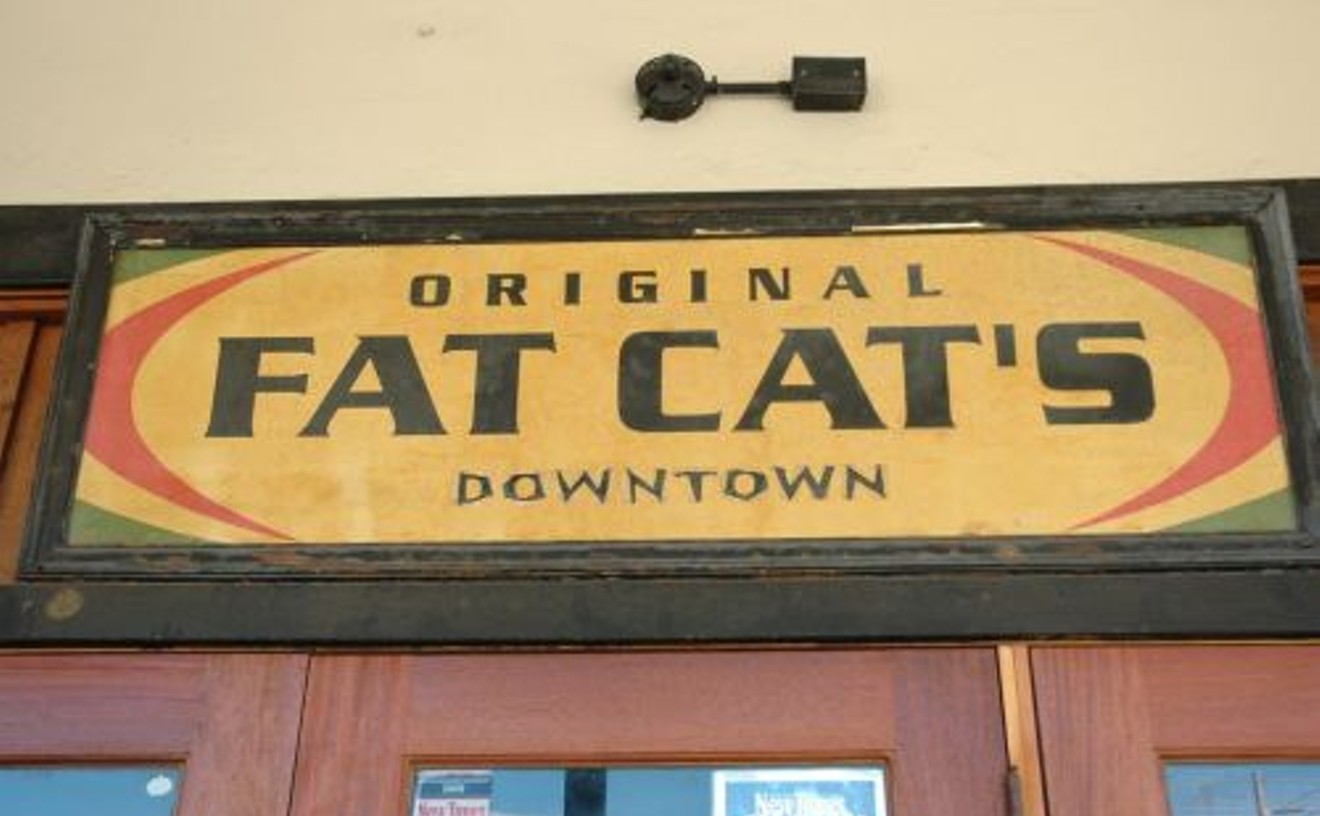 I sometimes picture my liver in the glass bottle of vodka behind the bar. On tough days, it's in the whiskey. If this just worried you, stop reading here... because in the dark, dank world of Fat Cat's, shame isn't welcomed. I know this — I'm the regular, not you. I am not worried that this self-proclaimed acknowledgment will expose me. The barkeeps and fellow patrons don't know where I work or what I do. The staff didn't just walk off the sitcom Cheers. At Fat Cat's, there is no time to get to know you — so shuffle up to the bar and order your drink. That kind of cheery welcome satisfies the lovely, low-maintenance bartenders. This is not the place where female quasi-bartenders stand on the bar — if there's ass shaking in your face, that's because you fell on the dirty ground. Take my lead: Bring to the bar only the companions who understand the lush, drunk, or zombie drunk side of you. In this liquor shop, succumb to the drunkenness and embrace a look that says you have nowhere to go. Be nowhere and everywhere at once — be in your watering black hole. 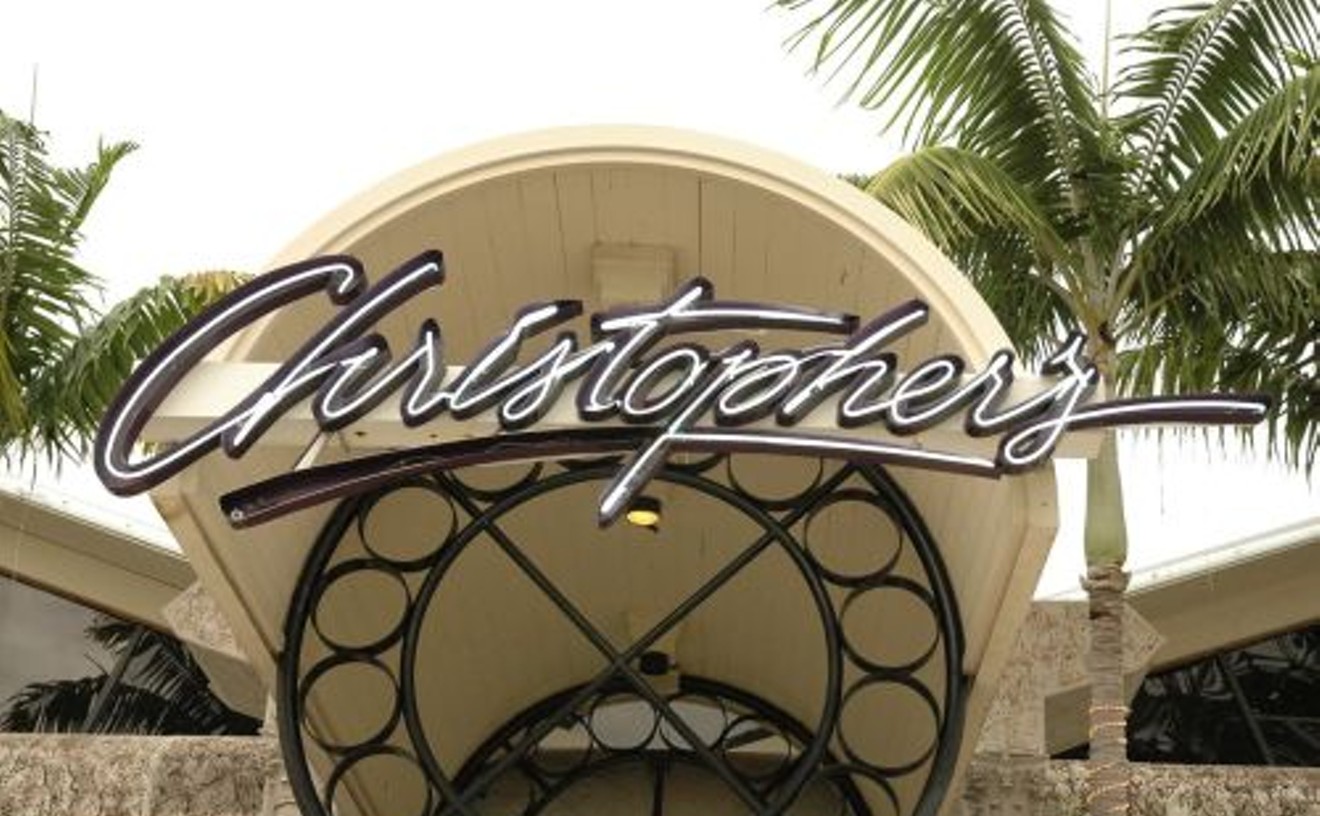 Most people know about the endangered Florida panther, stalking the Everglades. But an even more incredible beast is the lesser-discussed (but infinitely more ubiquitous) South Florida cougar. These creatures have been spotted in bars and nightclubs up and down the coast; witnesses often report seeing them with a martini in one paw and a demur post-adolescent male cub in the other. They're known to travel in packs tagged with Louis Vuitton insignia and marked by the scent of mature, lustful uteri. They are an extremely intelligent species whom nature has provided with a dangerous array of weaponry: from large houses to expensive cars to alimony checks with lots of zeros. And there's no better place to see a sleek cougar in her natural habitat than Christopher's, along the Intracoastal. If you really want to hunt a cougar, though, you're out of luck. Not because it's illegal (cougar season is open year-round) but because a cougar simply refuses to be prey. The best you can do is show up, make eye contact, and hope she wants to sink her teeth into you.

You see it all the time: women flocking to ladies' nights at Dicey Riley's or the Cove, tottering in high heels and wearing shiny tank tops. Their hair is perfectly flat-ironed, their Prada bags on display. This the worst possible way to meet single men, because the competition is stiff and the men are intimidated. Oh, and it could qualify as fraud — c'mon, you know that after you snag the guy, you're beelining for sweatpants and a ponytail holder. Ladies, let's try this the easy way. By showing up at a Fins game, you have the guy-to-girl ratio in your favor. Then, when you find a nice boy (he's under that XXL mesh jersey!), you can put him at ease by asking about subjects he knows, like two-point conversions — not what ingredients may be in your $13 Cosmo. He can tell right away that you're not after his money — for God's sake, you're shotgunning a can of Coors! And if you find your heart skipping a beat for a man wearing orange and turquoise (together?!) — that's true love, sister! 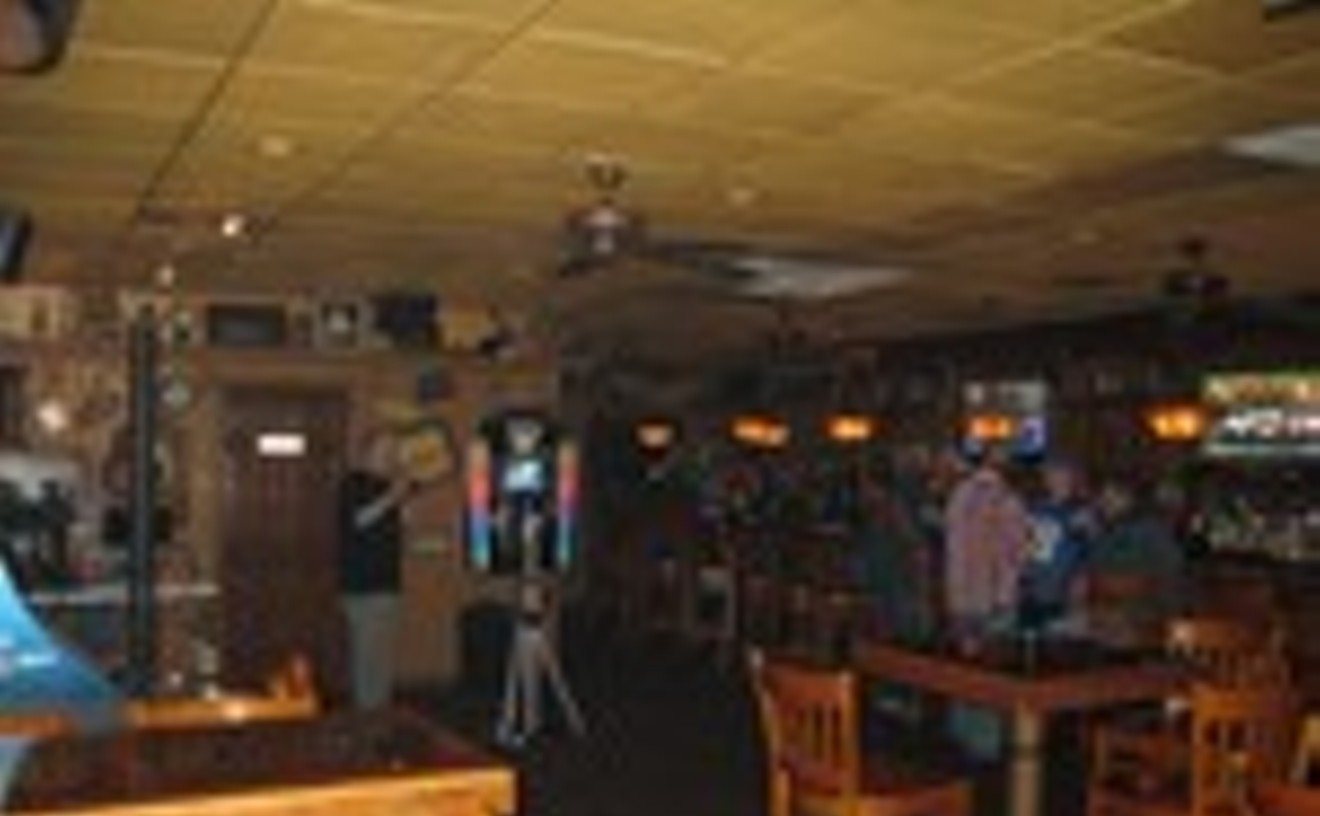 Typically, this award goes to venues that hold several pool tables, but this year's winner does not have — surprise! — more than two. Located near the docks of Port Everglades, this seafarer's bar mixes boaters, locals, and expats — all ready to share stories in between a maelstrom of shots and swears. So with the two pool tables and full liquor bar comes the modern Odyssey — the Lotus Eaters (drunk men), the Sirens (drunk women), and the shipwrecks (drunk men plus drunk women). And unless the actual cue-to-ball motion is a drug for you — and the ones who get "high" off the game are fun to watch too — pool is sometimes not enough. Instead, travel to play pool in the sea world.

The Circus Sports Bar and Grill 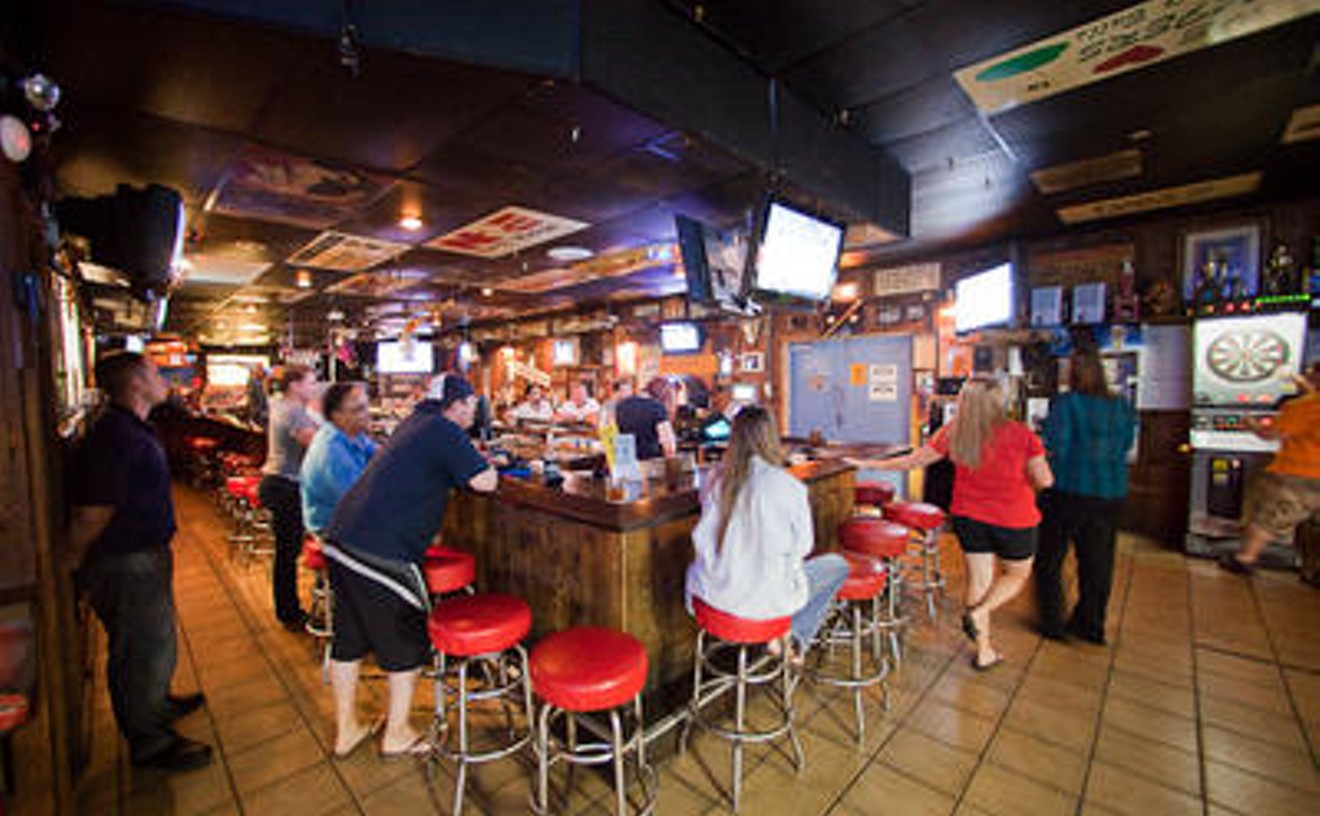 Let's get one thing straight up front: Clowns are fucking creepy. And circuses are mostly filled with sanctioned animal abuse and freaks who don't believe in gravity (until it hits them in the face). But not all big tops are bad. The Circus Sports Bar and Grill in Pompano has a fantastic collection of clowns and party animals sitting on both sides of the old wooden bar every night. These Ringling-worthy souls won't jump through fire on command or crowd into a tiny car with a bunch of men in makeup (well, maybe after a few drinks). But most of the neighborhood men and women who've been coming here since the '70s will buy a stranger a round and sit around shooting the shit. There's no bearded lady or tight rope, but there are enough pictures of clowns to scare all the children in Florida twice over. Clown paintings, clown drawings, clown sculptures, even a stained-glass clown. Luckily, the friendly faces (and cheap drinks) more than make up for the eerie setting. Plus, it doesn't smell like elephant shit.

Mystery Drink at the Mai-Kai 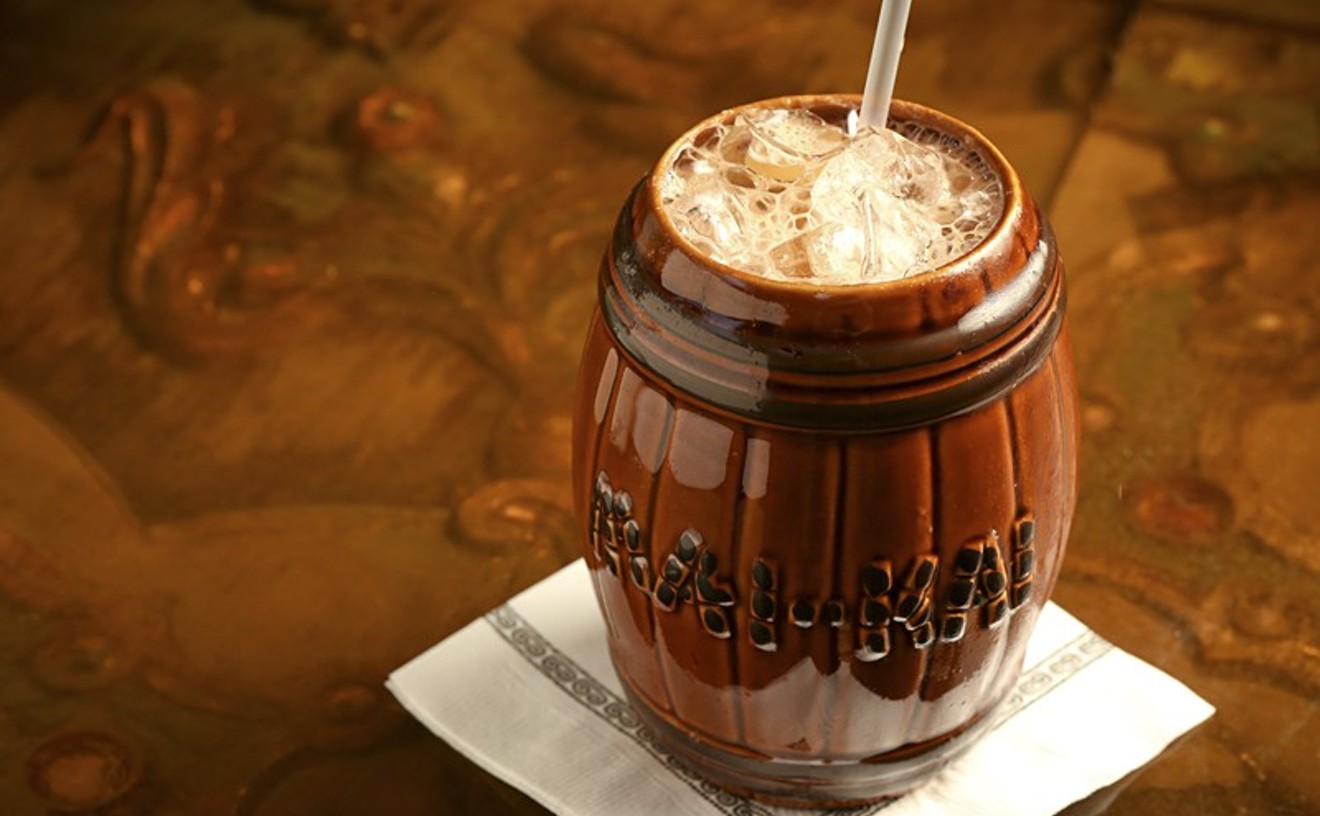 The Mai-Kai was a mini Polynesian theme park in the middle of Fort Lauderdale when Fort Lauderdale consisted only of a beach and a few condos. Except for some recent, hurricane-induced renovations, the restaurant hasn't changed much since its opening in 1956. Its over-the-top jungle décor, flowing rivers, and roadside torches remain. The drinks are your typical island-vacation fare, except for one: the "mystery drink," which might fail to be much of a mystery to devoted South Floridian fans after 50 years. Still, it's the only drink in the area that will get you and three friends noticeably hammered as — spoiler alert! — hot Pacific Islanders dance for you. If you keep drinking and decide to roam through the Mai-Kai's tropical gardens, be mindful of all those pesky waterfalls and rivers that totally come out of nowhere.