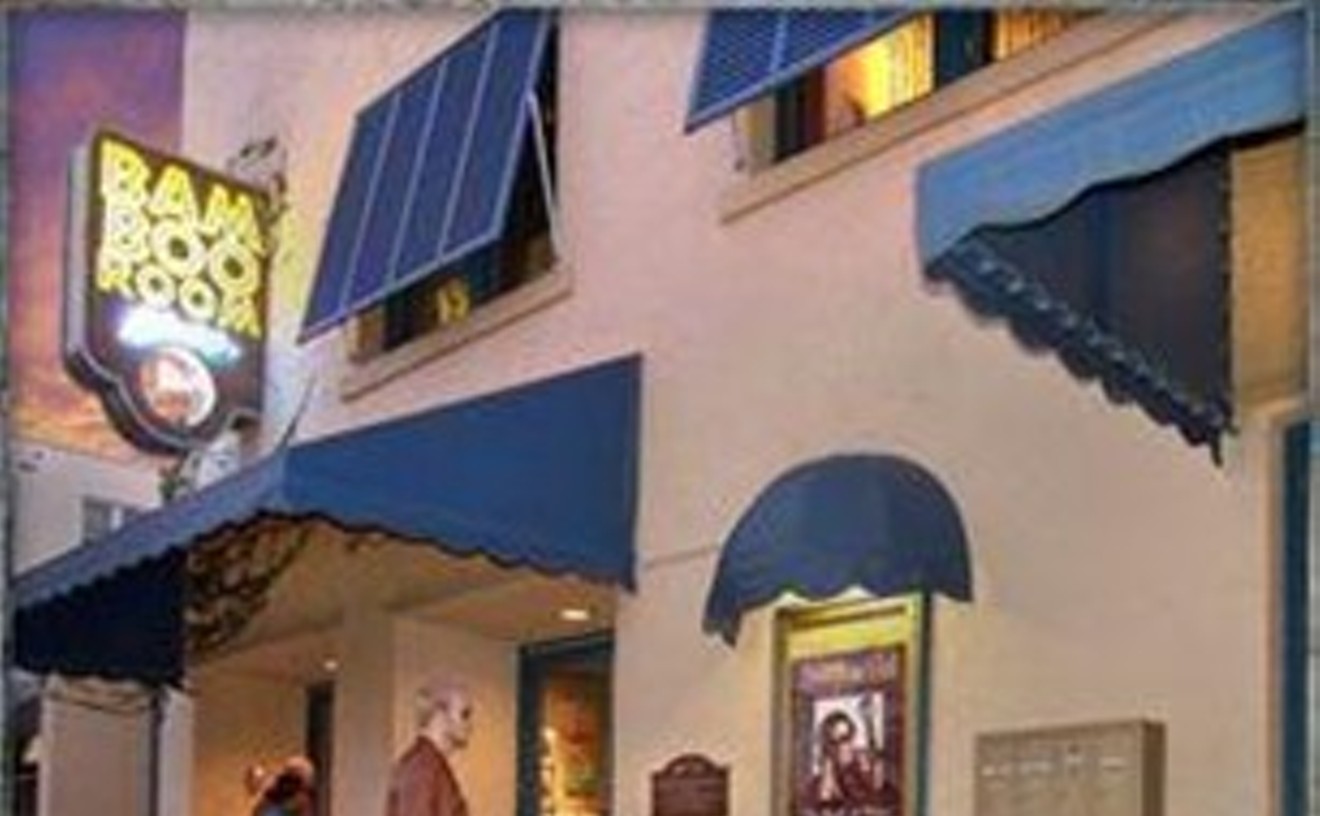 In terms of decibels, sweat, and determination, Lavola's got South Florida by the balls. Led by Julian Cires' soaring, unparalleled vocals and similarly acrobatic guitar work, the trio provides a sonically complex experience on par with the Mars Volta and occasionally even Radiohead. Ably filled out with bassist Matt Hanser and drummer Brian Weinthal, this is a group that's always on the brink of complete thudding and screeching chaos, but it never loses the handle. Each one of its EPs — Black Sea of Trees, Live at Propaganda, and Leaving Paris — has proved to be better than the last.

Between the free wine, the lurid red lobby atmosphere, and the scandalous, nudity-filled programming, there was always something potentially dangerous about Fort Lauderdale's Sol Theatre; it was a venue whose shock potential was limitless. Before its 2010 closure, the playhouse serviced an edgy LGBT audience, and Empire Stage, which launched its first show in the former Sol space in January 2010, has maintained Sol's beloved ambiance while improving on some of its deficiencies. Since taking over the Flag­ler Drive hole-in-the-wall, artistic director and New York-based bartender and actor David Gordon has installed a better lighting system and finally fixed the leaky roof. You can still pour yourself some free wine, collapse into the comfortable couch seating, and see envelope-pushing fare you won't find anywhere else, including the gay-pornography comedy Making Porn, the campy favorite He's Coming Up the Stairs!, and the offbeat dramedy Sex and Violence. "We are interested in making people laugh," Gordon says about his theater's mission. "We're not looking to do heavy dramas; it's most fun as an actor to be onstage while people are laughing."

Having helmed one of the hippest dance floors in Palm Beach County, Flaunt Thursdays at Respectable Street, "Marvelous" Kendall Courtney has built up considerable favor among discerning indie electro fans. This turntable whiz can go lowbrow too, though; on Friday nights, he DJs to suburbanites in an open-format style at Margate sports bar O'Malley's. Marvelous Kendall knows no bounds, easily transitioning from a deep pulsating Chromeo remix into a funky take of the Outfield's arena-rock classic "Your Love" with ease — all without a touch of irony to boot. At one point this year, this mishmash mastermind was behind the decks at four different debauched parties — no small feat and many a hangover, we imagine. Although some of those nights have gone by the wayside and others — i.e., "Flaunt" — will probably remain until oblivion, Marvelous Kendall keeps on with his prodigious beat skills. The talented DJ has big plans for the summer, we hear.

It recently inked a two-year deal with Ocean Front Records — a former subsidiary of influential soul label Motown Records — and now, the all-girl group the New stands to be one of South Florida's breakout stars. This half Broward/half Miami-Dade band's potential success owes a lot to lead vocalist and guitarist Lori Garrote. Many would say she is the principal reason the New might just be the newest thing on everybody's lips in 2011. Garrote has a delivery that is deliciously inviting, a subtle snarl that verifies, "Yeah, I'm punk rock gal" while somehow still conveying a confectionery-schoolgirl bubblegum-pop sensibility. Garrote is the perfect union of Bikini Kill and Michelle Branch — if ever such an inexplicable union of disparate worlds could exist. Over the group's chunky Breeders-esque riffs, Garrote's voice is an irresistible force. To add fuel to the fire, Garrote possesses an alluring pout that harks back to the Bangles' sexpot, Susanna Hoffs, and the composure of someone twice her age. She is, in essence, an A&R rep's dream.

Julian Cires, lead singer for cacophonous Northern Palm Beach three-piece Lavola, possesses the kind of vocals that command attention. He has dexterity in range, for one, taking his voice on adventurous turns that vacillate from ear-piercing howls one minute to soothing, velvety coos the next. Cires, a rather handsome Latin man, can also take his delivery in intriguing androgynous directions. He has Aimee Mann and Björk listed as influences on his band's profile page, and his more effeminate vocal skills are evident on the more tender dips in his trio's sonic roller coaster. Thom Yorke and his haunting and bewitching voice, however, is Cires' number-one inspiration.

After a few years of relative quiet from the Lake Worth singer/songwriter, it's a relief to hear that John Ralston can still fill a single tenor note with vulnerability and hope, glee and introspection, or wisdom and bitterness. His latest album, Shadows of the Summertime, proves to be one of the finest alt-country/roots collections the area has ever heard, and above all, it's his relaxed vocal style — a tad like Tom Petty, a smidge of Jeff Tweedy, but mostly just uniquely Ralston — that makes it definitive. His recent recordings with Invisible Music show an equal amount of polish, so he might not only be the best vocalist but the hardest-working one as well.