Amateurs get their tattoos at touristy shops on the beach. Pros get them from Michael "Pooch" Pucciarelli. The dude has been drawing twisted sci-fi and monster-inspired art since he was a wee lad whiling away his after-school hours with thrash-metal records and H.P. Lovecraft novels and continued filling of sketchbooks through his days as guitarist in Raped Ape. He opened Altered State in 1996, and partners Scott White and Brad Cain round out his talented team. Though he's a big hunk of a man, Pooch is actually gentle and eloquent and can discuss tattoo styles and legendary tattooists like a freaking art history professor. In the past few years, he's transcended the art world beyond tattoos, exhibiting paintings at gallery shows and doing commissioned works. Though he's known for a lot of the standard lowbrow themes — skulls, circuses, roller coasters, and nightmare images — ask him for anything. He will give you the baddest Miami Dolphins logo or Winnie the Pooh on Earth.

Well, the name is apt. Not exactly a tidy place, Confusion looks a lot more like a collector's bedroom than a record store. Records are seemingly carelessly strewn across every square inch. They fill bins, are scattered on the floor, are tucked in corners, hang on the walls — even the ceiling! CDs too, and cassettes! It's easy to assume that there is no order to this chaos and that the one must-have record you need for your collection will never be found in the madness. Ah, but Confusion Records is fueled by a unique kind of enthusiast/owner, one who doesn't have a website and seems to rarely answer the phone (we could track down only his first name — John), who knows the store inside and out and can direct you, without hesitation, to whatever it is you're looking for. You will (perhaps literally) stumble upon a lot of great stuff, but if you're looking for something in particular, you're going to need John's help, which means you'll strike up a conversation with him, which means you'll learn a thing or ten from the vast store of musical knowledge in his most amazing brain. 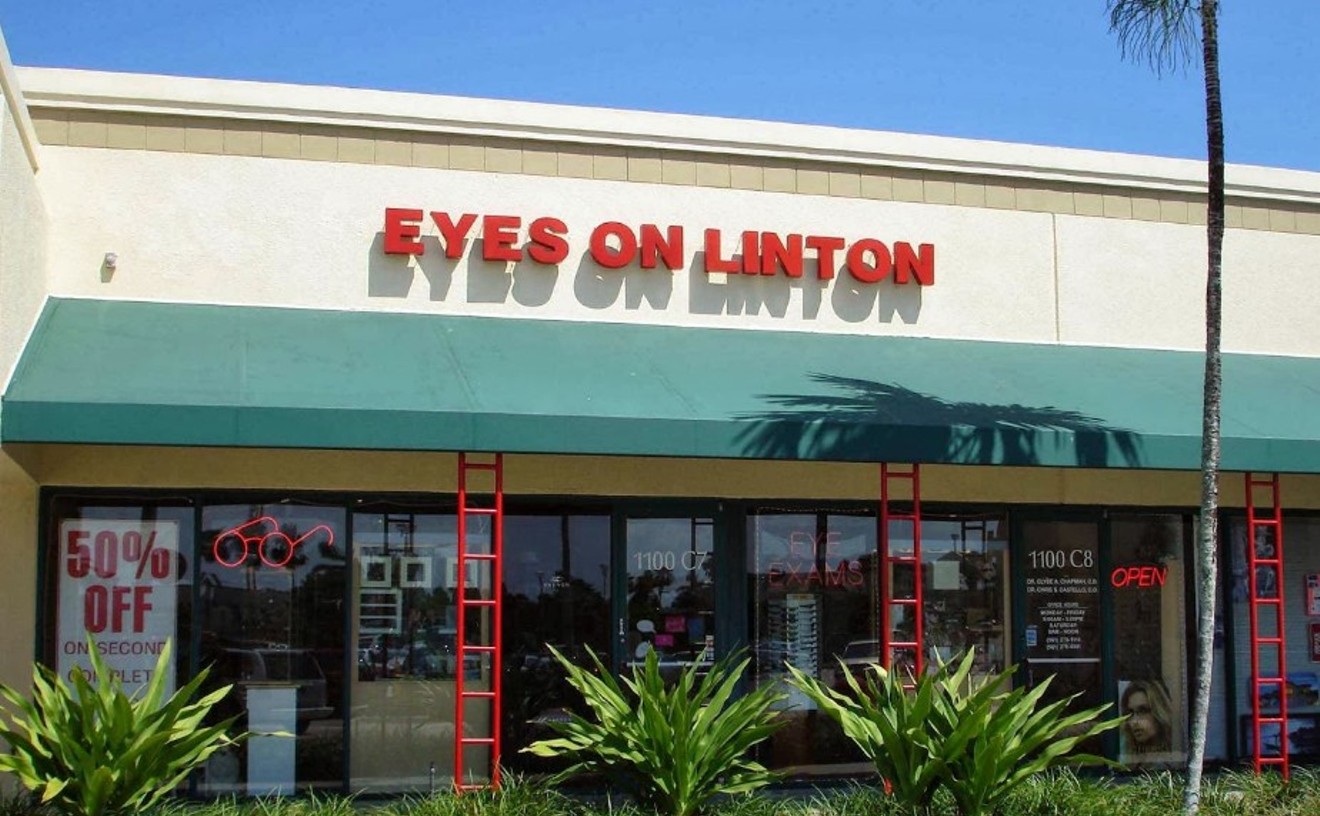 If you like the idea of supporting local, family-run businesses and you happen to be in need of a fashionable pair of glasses, Eyes on Linton can provide you with both. Chapman was raised in Delray Beach, and two of his five children work in the office with him. The staff, both blood-related and non-, is friendly and helpful. Prescription not working for you? Bring it back; they'll swap it out. Refer a new customer? You get a $25 store credit. Chapman is thorough and will take you back and forth to the lens room himself, "hmm"-ing and contemplating and taking the time to try one lens after another until you get the prescription just right. And don't worry about getting the hard sell on extra features like lenses that get dark in the sunlight or glare coating. They'll lay them out for you but be very clear about what your insurance covers. Their selection of glasses and sunglasses is pretty varied, so you can go minimal with frameless lenses or make a Zooey Deschanel-type statement with your thick, black rims. Just don't set your glasses down lens-side down; you will get a scolding.

It's South Florida. Your ride needs to be fly. You can't settle for the drive-through car wash at Chevron. Oh no, no, no! You need a real live person who's going to wash by hand and take it very, very seriously if there is water residue on your paint job or fly guts on your radiator. Un-freaking-acceptable! Well, check this: In a flash of brilliance, John D'Eri and his son Tom thought to pair autistic individuals who frequently thrive on repetitive tasks with car-washing jobs. The idea stemmed from his concern for his own autistic 22-year-old son, and he now employs 35 autistic workers who wash cars in a special process with 46 distinct steps. Rising Tide consulted with Sonny's Enterprises (the maker of car wash systems) and UM-Nova Southeastern University Center for Autism and Related Disabilities to develop its business model and ensures that all car washers go through a 25-hour training program developed with Car Wash College. Bonus: The cost is only $5 to $35.

So this isn't the biggest fleet in the world ­— it's one man with a limo ($75 an hour, or ten hours for $500), a party bus ($150 per hour, or ten hours for $1,000), and a Star Wars fascination (though he has extra drivers for busy nights). But that one man, Pete Greenstein, is an amiable, honest guy who doesn't drink or smoke, so you know you're in good, safe, capable hands and won't get ripped off when you're good and schnockered and need a lift at 5 in the morning. Though he'll go as far as Port St. Lucie and Miami, he's known to make regular trips from Palm Beach Gardens/Jupiter to Clematis Street and back. Call — if he's making a run, you don't have to rent the whole bus; just pay per head and jump in. He also does regular runs from Palm Beach County down to Fort Lauderdale strip clubs — and in fact, if you're in downtown West Palm Beach, get a free ride to Spearmint Rhino's. Try not to hurt yourself on the stripper pole in the party bus, and please don't puke in the limo — no one ever has, so far.

Want free birth control? Here it is: A decent daycare in Fort Lauderdale costs $700 to $800 a month minimum. If this information is coming at you a little too late and that bun is already warming up in its oven, you've likely already accepted this terrifying fact and must now settle on which of these facilities you're going to turn over your salary to and entrust with little Snoogums. We've taken all the tours, interrogated all the directors, critiqued all the lunches, spied on all the teachers, and weighed the pros and cons (this one has security cameras, but that one has more shade trees on the playground) and can confidently declare that First United Methodist Church has the winning combo. Though some people tout Montessori programs (which cost the same as college tuition) or Nova Southeastern's program (harder to get into than college), this cute, pink downtown church school has a lovely, well-trained staff, clean and well-maintained toys, and indoor and outdoor space to roam, so your kid won't be stuck in one place all day. Once you get her in, it'll be harder to get her out — she'll want to stay and play even past the 6 p.m. closing time. Thank goodness for the lovely Mercedes, who buzzes parents in, keeps sketchy people out, and bribes those little suckers out the door with a sticker at the end of every day.

Used to be, you had to pick between two crummy options: the affordable neighborhood salon with the nice lady whose haircut you can afford — but who's going to make you look like Aunt Millie till it grows out — or the way-cool salon with the punky staff and trendy cuts — but that's going to cost you $4,020, just for single-process. (You will know these people by their cooing "Ooh, you look fabulous" in that fake voice.). But now, you have Richard. Though he's a veteran of Fort Lauderdale's nicest salons and is up-to-date on fashionable looks, he never caught that whole Being Judgmental virus. It's like he honestly didn't even notice that you walked in with a ratty-ass 'do, and he really does remember your life drama even though you haven't been in for five months. But underneath that sweet-uncle vibe are some ninja scissor skills. Basically, he just hums and chuckles and gives you wine, and two hours later, you walk away looking ten years younger with a cut that really will work with your texture. And since you haven't been pressured to buy any $37 carbon-fiber, sulfate-free, wind-defying gloss, you'll have a few bucks still in your pocket. 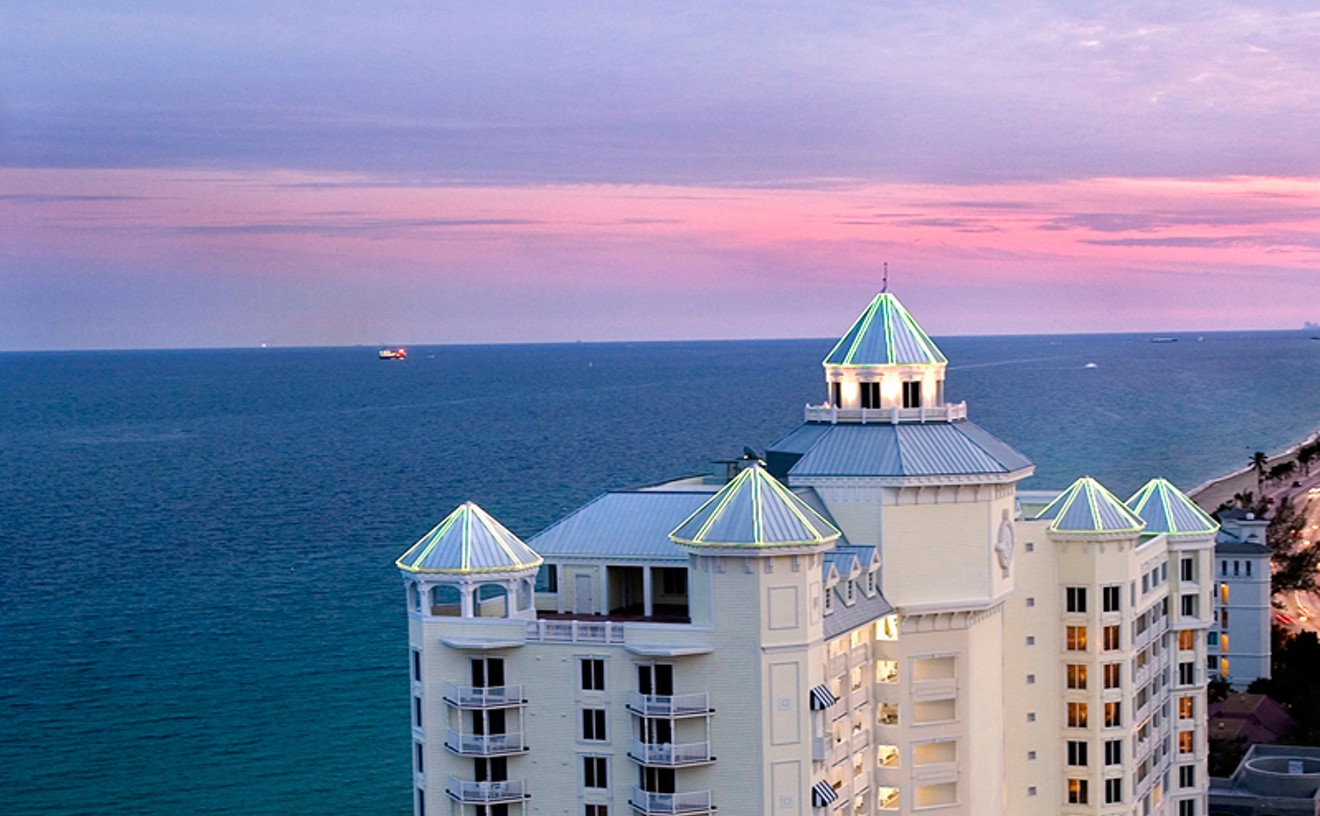 Lots of hotels are on Fort Lauderdale Beach... but how many of them are actually on the oceanfront? (None of that across-the-street nonsense here.) Lots of hotels have restaurants inside... but how many have an old-fashioned ice cream shop? And lots of hotels have pools... but how many of them have a Lazy River? The Pelican Grand's location (just out of earshot of the strip's loud bars), its old-fashioned Southern-style veranda, and most of all, its superwarm hospitality make this place deliciously, languidly out of place. Though we generally despise corporate takeovers, the fact that the Pelican was assumed by the Noble House brand of luxury boutique hotels means it is constantly being upgraded and will have to live up to the chain's high standards. Sign in, unpack, and have the bartender sling you one of his amazing cocktails. (Pelican Brief, anyone?) Pro tip: The hotel has about 25 rooms that are privately owned by individuals (like condos), and if you score one of these (ask for a manager when you book), you can sometimes save $100 per night (though housekeeping may cost extra). 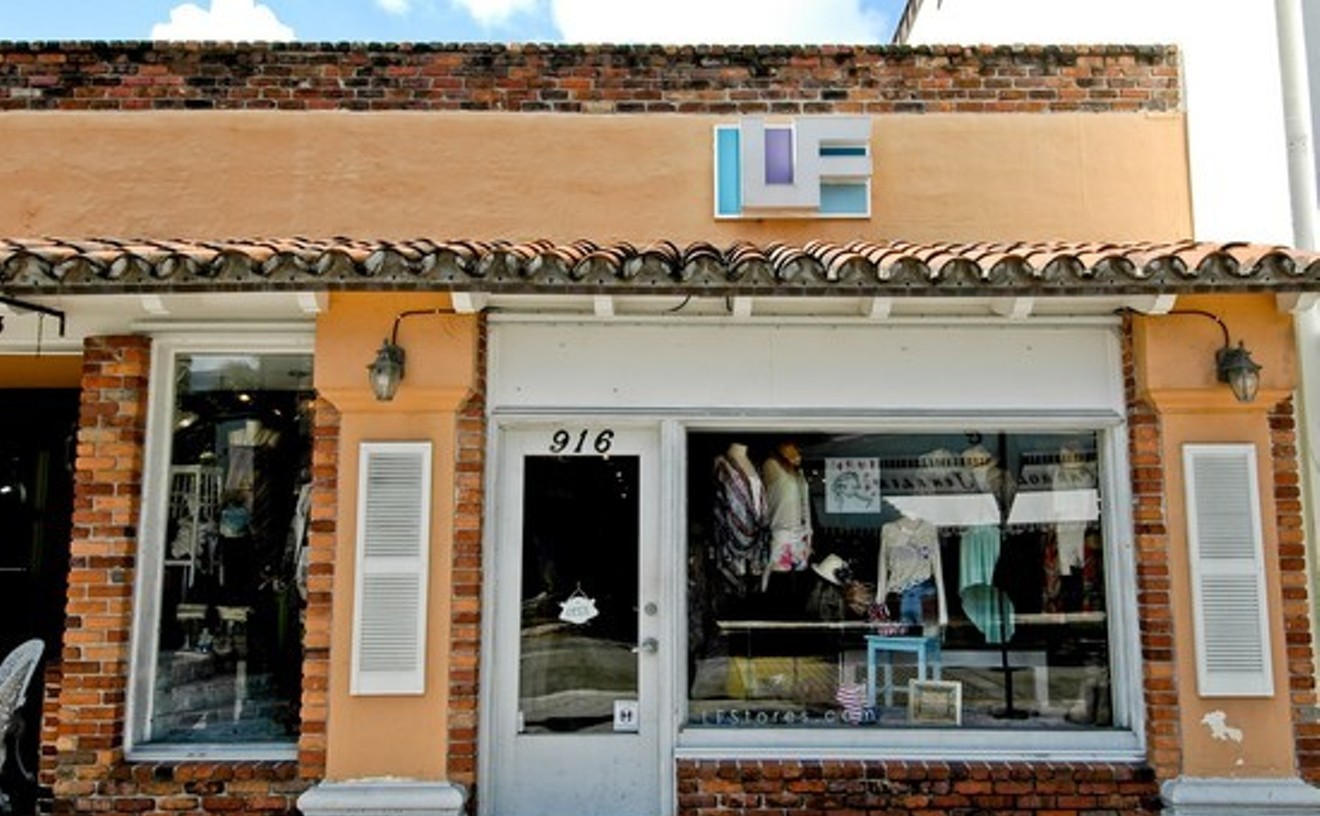 Toward the end of each season, early in the morning, around 8, you'll see a line start to form outside a small boutique called LF (named after owner Laurie Furst) on Las Olas Boulevard. On end-of-season sale day, at about 9 a.m., the salespeople take a deep breath (betraying both dread and anticipation), brace themselves, and open the door for wolfish shoppers who will inevitably destroy the store in search of bargains on the usually very expensive (dare we say overpriced?) merchandise. The store carries young, fresh styles — all unique because the brands are exclusive to the store (plus a few fashion lines from London and Paris). The first weekend is by invitation-only to customers who have bought something before (afterward, anyone can get what's left); and while not officially recognized, the first day of the sale is an unequivocal holiday for the fashionably inclined youth around these parts. Girls skip school to spend the day rummaging with their moms. They trudge through the bodies, picking off shirts and pants and skirts, which, after an hour, hang limply on the disheveled shelves and racks. The scene takes on a macabre-party vibe, with shoppers resembling vultures as they pick at goods left after a fashion explosion. The little room's air conditioner can't handle the pressure, and sometimes the heat becomes unbearable. But brave girls and moms don't care. After all, beauty is pain, right?