No matter how many times you see The Big Lebowski, the classic comedy always leaves you with two urges. One of those desires you will have to travel to Washington, Colorado, or Amsterdam to fulfill, but in order to bowl, you need look no further than Davie. Sparez has a plethora of lanes to help your inner Lebowski abide. It's open from 9 a.m. to 1 a.m. Sunday through Thursday and doesn't close until 3 Friday and Saturday night. The longer hours on weekends are necessary, but weekdays usually provide no wait coupled with a discounted rate — an hour of bowling drops from $24 on weekends to $17.50. Leagues and specials are constantly rotating, so it helps to check the website for the best deals. Weekend late nights feature special-effects lighting and a live DJ from 99 Jamz who will never, ever play the Eagles. 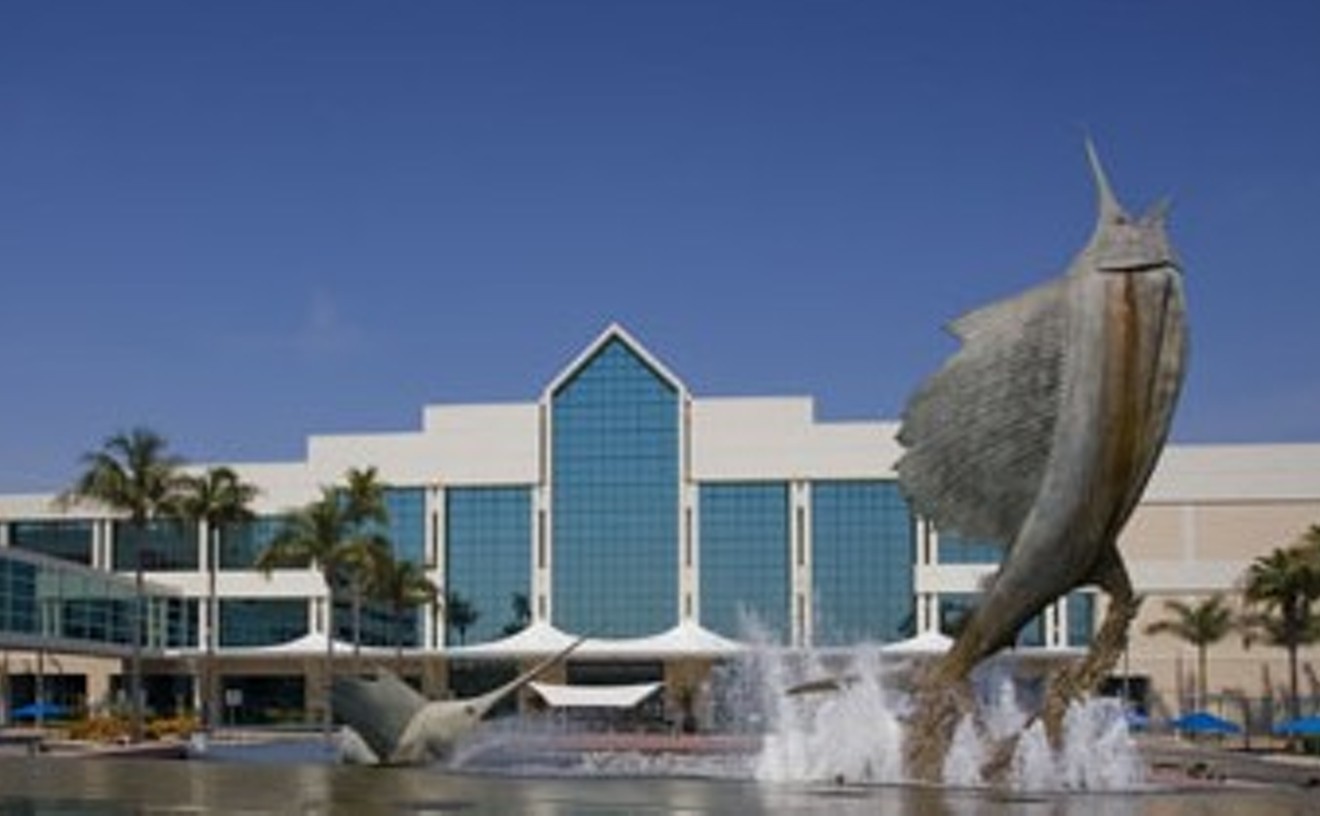 The lights are bright at the Broward County Convention Center, and the sexual tension is high. Just about anything goes, at least for the three days the Exxxotica Expo hits town. The atmosphere is surprisingly chill and not at all creepy, even though the event features some of the biggest stars in the adult film industry and a lot of giant dildos. Chances are good that you'll meet men here. Single men. Men who are down for whatever, and in this case, whatever equals a good time. Maybe you like a little leather with your loving or perhaps feathers with your fucking? This is a unique partnering experience — a place where you can find out what the dude is into before the first date. An easy way to filter out the duds. Everything's on the table at Exxxotica, and that's why it's the best, and funniest, place to meet single men each year.

Finding a compatible, cool partner is about as hard as finding something DIY you'd actually want to buy. At Art Rock, though, the annual DIY indie marketplace in West Palm Beach, you may have less trouble finding either of those two things than you'd ever imagined. Art Rock will be packed with ladies — ladies who can make things, ladies who bake delicious cupcakes (even vegan ones for you non-egg-eaters out there) and gourmet jerky — yeah, jerky. Ladies who have tattoos and purple hair but wear aprons because they don't want to mess up their vintage '50s dresses. The affair is hosted by the folks who do Stitch Rock in Delray. It takes place at the Armory Art Center with 60 booths, swag bags, free parking, and crafty art. With all that, your chances of leaving with tons of numbers and looking like a sensitive gentleman are pretty rocking. Note: This event takes place in the springtime — mating season.

Had a rough day? Commute depressing you? The printer jamming up again? There is not a better way to remove yourself from your daily dose of bullshit than transporting yourself to an alternative universe — any event hosted by Misty Eyez. The 11-year veteran drag queen reigns supreme over a kingdom of unworthy disciples and changes lives. Her YouTube channel is off-the-chains, with tutorials and behind-the-scenes secrets that can serve as your drag queen training school (we have it on good authority that her vid on creating cleavage for skinny bitches works wonders). Her blend of humor, glamour, and general over-the-topness comes with a message of empowerment: "Let your hair down and have a good time!" says Misty. Our lives are full of serious events, but you need to have some fun. Fun is in spades at her shows, which are all over, including on the goddamned ocean with the latest Drag Stars at Sea cruise. Whether it's spreading the drag gospel with the help of the internet or hosting Bitchy Bingo at Lips in Fort Lauderdale, Misty always does it like she means it. Catch her now, lest our butterfly head for bigger and better things. She is in the process of auditioning for RuPaul's Drag Race. There is no doubt our girl will make it, but we have our freshly manicured fingers crossed just in case.

Drink specials, a packed house, and an ear full of reggae music... Sounds like someone has a case of the Mondays! There are few times that the party is 100 percent guaranteed, which is what makes E.R. Bradley's weekly reggae throwdown so danged important to our collective well-being. Gracing the stage each and every Monday night, local reggae favorites Spred the Dub have good times oozing from their pores while shaking out their own tasty jams and groovy covers. The six members don't just keep all the fun for themselves; they bring in opening bands more times than not, giving two-for-one a new meaning. Spred the Dub has been picking up speed, touring the country, and playing SunFest in 2014, but it's Bradley's where the real magic happens. Over the years, the band has moved its official Monday Night Reggae party around Clematis Street, but it has never felt more at home than at Bradley's, and it shows. Drink specials, cheap late-night food that is actually good, and never a cover.

From shore to shore, the inaugural Coastline Festival made its way from Tampa to West Palm Beach's Cruzan Amphitheatre, bringing with it enough electro pop to please absolutely everyone born from 1987 to 1995. The lineup included WPB natives Surfer Blood, who — with lead singer John Paul Pitts half in the crowd — performed the Lebowski-loathed Eagles' tune "Take It Easy" for a screeching crowd of superfans. Other acts included Passion Pit and Matt and Kim, both of whom played their final shows of 2013 at Coastline, adding the liveliest music to this "musiculinary experience." There was a serious variety of both food trucks and craft beers. Brews were from the coolest spots around, like Due South Brewing, Funky Buddha, Dogfish Head, and Magic Hat. This added an air of indie to a venue that usually boasts ketchup on hot dogs as the finest feast available. You could snag a Radio-Active Records pin for your lapel or tote from an old-fashioned, coin-operated toy machine, don flowers in your hair, or get someone to cut your shirt into a unique design onsite. Colorful tattoos were displayed proudly too. It was a perfect combo of new and cool. All there was left for you to do was hold your iPhone high, wave it side to side, and sing "To Kingdom Come."

You're driving down to South Beach for the night to catch Steve Aoki smash cake in someone's face and press mad buttons, when you press play yourself, but on your iPod. West Palm Beach native Will Brennan's Prodigal Son release comes up first. And lo and behold, Brennan's also heading south on 95 in the early verses of the opening track, "RNR." The whole album has both mainstream radio appeal and a delightful enough edge to keep it interesting and memorable. Brennan is one of the few hip-hop artists signed to Aoki's Dim Mak Records. Since this free full-length, Brennan's continued to create songs influenced by South Florida — with themes like humping in the ocean and hating his job. With or without a substantial label behind him, we think Brennan's got enough flavor and skill to break the sunny glass Florida ceiling.

West Palm Beach's New Coke released a frenetic three-song EP this February that's packed with negativity and punk hysteria, and we love it. It's hypnotic, and yeah, it makes you want to sort of barf. But in a totally good way. The Slovenly Recordings recording can be downloaded online, or you can order a seven-inch vinyl for your casa. Songs include "Duct Tape Your Mouth," "I'm Not a Fan of Your Romance," and "I Am Drunk, I Have a Gun, I Want Names." This is the band's first release in two years, and the PBC trio killed it — like they strapped it to a chair and then beat the shit out of it until it died. And now the world has this incredibly intense product that was recorded in Miami with Torche's Jonathan Nunez. Slovenly's little album disclaimer says to expect a full-length this year, so we'll just sit here, hold our breath — maybe duct tape our noses too — until the LP hits the web and our record player.

West Palm Beach's beloved Surfer Blood gives us the warm and fuzzies. The band made us proud on Late Night With Jimmy Fallon. They made us proud touring with the Pixies. But what we really love is how the band has stuck to its roots; the band members' sunny, palm-tree-laden upbringing left an impression. This was made perfectly clear with the premiere of "Say Yes to Me," from their sophomore album, Pythons. The clip takes the locals home to Howley's, an essential diner that has always been close to landmark status for those in the know. Now, a little piece has been shared with the world. The video is a solid look into the band's lifestyle: Its fun side shows through, and there are tater tots. Even rock stars love tater tots. "Say Yes to Me" is a breezy jam, and the weird costumes and trippy story line make for a video worth watching. Say yes to Surfer Blood; say yes to tots.

Lake Worth's Wake Up is riding high on a big old indie awesome wave. The band is hot right now, and yet it's also as cool as can be. It's on tour with Surfer Blood, played CMJ, and hasn't even put out a full-length album yet. It does, however, have an impressive grungy and power-pop-heavy EP, Forever Home, out on Decades Records. The disc even got some love from the omniscient blog Brooklyn Vegan. It's got, among other things, a touch of Built to Spill, a tiny taste of Weezer, and a lump of Pavement. Singer and songwriter Evan Mui is a scene vet in these parts. He's played with other worship-worthy bands like Guy Harvey and the Dewars. The bandmates are the best of friends: There's Mui, guitarist Bobby Yapkowitz, bassist Austen Bemis, and now Suede Dudes' unfortunately named singer Bryan Adams as drummer. This band is gripping rock 'n' roll by the nuts right now and is sure to coast its way to stardom, and soon.