There's a long tradition of separation of church and state in America, but sometimes, elected officials need to be publicly embarrassed to be reminded of it. A more polite passerby might have let a city building set up a manger at Christmastime without complaint, but longtime gadfly Chaz Stevens preferred to call bullshit when the City of Deerfield Beach allowed such a display outside the fire station. Last December, Stevens, a self-employed software developer, frequent gadfly, and self-described "hardcore atheist," called the boy king "baby fucking Jesus" and disparaged the barn scene as a "baby Jesus Motel 6." He threatened to sue Deerfield if it hosted Christian symbols while refusing to allow Stevens' own antireligious "Festivus pole," a six-foot-tall contraption made of Pabst Blue Ribbon beer cans, inspired by an episode of Seinfeld. Then, Stevens took his battle a step further and applied to display his pole in the rotunda of the state Capitol as well — a stunt that was, astonishingly, approved by the powers-that-be. Stevens drove to Tallahassee to install his "serious feat of ridiculousness." During the month that it stood, the Festivus Pole earned worldwide media coverage (including accolades from the Colbert Report) and paved the way for the Satanic Temple to apply for its own display.

Pop-punk seems to have arisen from the minds of suburban teens too scared for the filthy pit of a real punk show. So it must be very strange to age if you got famous making this kind of kid-friendly music. You're the oldest guy at the show and you're onstage. Back in December, Coral Springs-bred pop-punkers New Found Glory ousted one of their most significant members, guitarist and songwriter Steve Klein. Fans scratched their adolescent or now postadolescent heads and wondered what the hell happened. Well, what happened is that Klein was arraigned in San Luis Obispo Superior Court on multiple horrifying charges. These included: two counts of lewd conduct with a minor under 14, three of lewd conduct with a minor 14 or 15, one of intent to commit a lewd act with a minor, and one of possession of child pornography. His lawyers say he met these underaged females thinking they were older-than-18 women on the web. And the porn? It was video stuff they sent him. How was he to know?! Whether this music man is telling the truth or not, the courts'll decide.

An attractive 20-something teacher from Boca Raton, Olivia Sprauer made headlines after she was canned for moonlighting as a lingerie model. Sprauer, who was the teacher we clearly never had when we were growing up, was called into the office of her Martin County elementary school one afternoon. The school principal confronted her on the spot, showing her photographs of herself dressed in scantily clad clothes and pining for the camera. Sprauer admitted that the buxom beauty wearing nothing but a G-string was, in fact, her. She lost her teaching job on the spot. But because the internet is a place where fame can go viral as well as a place where you can look at pictures of naked people, Sprauer was able to parlay her well-timed 15 minutes into a burgeoning modeling career. Going under the name Victoria V. James, Sprauer's internet persona took off on Twitter and Facebook, and she eventually made her way into the pages of Hustler magazine. In the end, Sprauer is just another single mom with two kids who lost a job and had to make do with what she had. Or, as she put it on her blog: "I'm too sexy for my job...Lol."

Hollywood, Florida, native Josh Gad had always dreamed of being an entertainer. As a young man, he moved west and trained with the famous improvisational troupe the Groundlings. From there, he was able to use his talent as a comedic actor to land roles on the short-lived 2007 Kelsey Grammer vehicle Back to You and as a correspondent on The Daily Show With Jon Stewart. But it wasn't until the 33-year-old Gad landed a role in the critically acclaimed musical The Book of Mormon in 2011 that the industry took notice. Gad turned his performance as Elder Cunningham into a star-making role, earning himself a Tony nomination and opening doors to bigger parts. But no part has been bigger for Gad than his voice-over work for Disney's 2013 Academy Award-winning smash animated film Frozen. Gad landed the coveted role of Olaf, the comical snowman who dreams of summertime. Since that big break, Gad has seen meatier parts line up for him, including a biopic in which he will play late comedian Sam Kinison. Not bad for a kid from Hollywood, Florida, who grew up with Hollywood, California, dreams.

At last count, the New York Times had 11.8 million Twitter followers. LeBron James had slightly more, 12.8 million. CNN also nudged him out with 12.8 million. But 20-year-old Ariana Grande beat them all with 15.2 million and counting. In terms of Twitter reach, this makes her the 41st most powerful person in the world, not far behind the trifecta of Katy Perry, Justin Bieber, and Barack Obama. Never heard of Grande? You must be over 18. The cutie from Boca Raton is a triple threat, acting on the Nickelodeon show Sam & Cat and dancing and singing in a music career that is managed by Bieber puppetmaster Scooter Braun. Grande's first album of high-pitched radio pop and carefully curated collaborations (one with rapper Mac Miller) debuted at number one on the Billboard charts last fall. She's still in closely managed, rising-star mode, but surely it won't be long before she shaves her head and kisses Madonna. Then she'll truly have made it.

By day, Kristen Hewitt is a sports producer, editor, and reporter. By night, she is Mom to two ridiculously adorable daughters. So basically, she's a superhero. You may know her best from her work as a Sun Sports reporter during Miami Heat telecasts, and she also works as coordinating producer of Billy's Bunch, a Miami Marlins kids show that airs on Fox Sports Florida. Hewitt put together a wonderful blog for mothers called "Mommy in Sports" that centers around the raising of her daughters, Lila Hope and Emylia Mae, and it's a must-read for moms. Everything from activities to parenting tips is featured on Mommy in Sports, all written in a relaxing, mom-to-mom-like way. It doesn't read like Web MD or parenting.com; it's just a mom giving you a window into the way she goes about parenthood. Between the photos of her two daughters (did I mention how cute they are?) and the parenting tips, it's the perfect bookmark for the mom looking for a little advice.

Are you depressed? Is your desk job getting you down? Kids a huge pain? Husband lazing on the couch? Old lady burning your ass about a bunch of yard work? Are you existentially shaky after watching the True Detective finale? Well, you could beeline for the shrink and spill your guts on a couch, or you could pick up a shelf of prescription happy pills for an emotional U-turn. Or... you could raise your spirits in a more natural way. You could get a spanking. Researchers at the National Institute of Gluteal Abuse have determined that a spanking per week can spike your endorphin levels. If you choose such a treatment for your moody blues, the best hand, so to speak, in the game in South Florida belongs to Scary Mary Santa. For 14 years, the South Florida fetish scene has been dominated by Mary, an artist/musician/dominatrix/fetish enthusiast who thrashes away at paying customers in her Fort Lauderdale dungeon, Chamber 7. As we can, er, personally attest, one laser-guided swat from Mary while fastened onto her St. Andrew's cross domination rack is enough to clear the dark clouds out of your head. Go ahead: Get spanked.

Best Fighters for a Noble Cause

Everybody loves a good locals-versus-developer matchup. In Fort Lauderdale over the past year, the heavyweight bout has been between flashy developer Asi Cymbal's 960-unit Marina Lofts project and a vocal opposition. The main issue: The project threatens to uproot the six-story-high, 100-year-old rain tree sitting smack in the middle of the development's proposed footprint. Despite promises to move the iconic tree, the plan still struck many as wrong-headed. Three people led the charge. Activist Cal Deal unloaded all of his rhetorical firepower against the project on his blog, Fort Lauderdale Observer. Jessica Kross rolled out a moveon.org petition asking the City Commission to save the tree, eventually notching more than 4,300 signatures. And Chris Brennan, first mate at the Water Taxi located near the site, filmed a YouTube video voicing his opposition. When Water Taxi — which leases its location from Cymbal — told Brennan to take down the clip or leave his job, he walked. Unfortunately, the Marina Lofts were greenlighted thanks to neutered politicians who get all jelly-legged around flashy blueprints. But Deal, Kross, and Brennan should still be congratulated for fighting the good fight.

If their pockets weren't stuffed with cash from fat cats, their paths not cleared by national political party machines, Rick Scott and Charlie Crist would be worried about Nan Rich. That's because the Weston Democrat is about the cleanest pol trying to make a grab for the governor's office, saddled with neither Scott's shitty record nor Crist's epic flip-flops. The longtime state senator isn't intimidated by the heavyweights she's stepped into the ring with. As a former head of the Senate's Dems as well as a past stint heading the National Council of Jewish Women, Rich is used to big tasks. But you'd have to be smoking a grow house's worth of Colorado-grade chronic to think Rich's run is anything but quixotic. In a less-experienced politician, you might write it off as a callow grab for name recognition. Rich isn't getting recognition at all. News outlets statewide aren't giving her much of a passing glance. Crist has skipped away from all her attempts at a debate before the primary. Regardless, she keeps dogging it out on the campaign trail, and for that, she deserves major kudos. 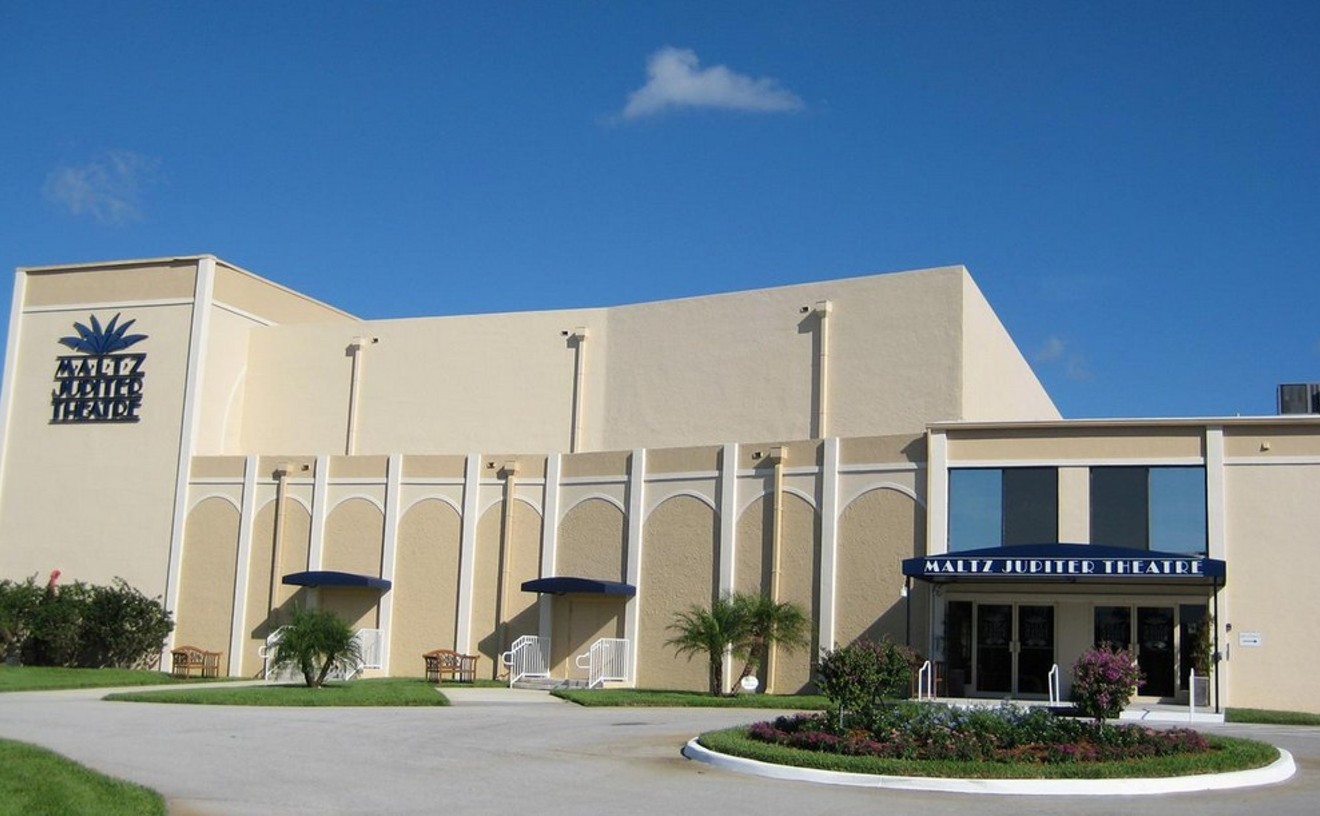 The Maltz Jupiter Theatre's production of Dial M for Murder — a mothballed murder mystery that was made into an unlikely 3-D movie by Alfred Hitchcock — was impeccably handsome. But it was also hopelessly embalmed in another time, with many of the actors failing to transcend 1950s mannequins. But as the film's chief antagonist, who is also, devilishly, its chief audience identifier, Todd Allen Durkin never seemed hamstrung by the antiquities of the source material. His emotional connection to this mannered snake — a once-successful tennis player who blackmails a former school chum into murdering his philandering wife — was so strong, so entrenched in contradictory textures, that his character psychology seemed more in tune with today's morally ambiguous antiheroes than the one-note evildoers who received their destined comeuppances in '50s potboilers like this. One minute he's seething with a mix of righteous anger and quivering fragility as he relates his wife's history of extramarital conduct; the next, he's combining smug satisfaction with barely contained panic as his perfect murder plot slips away from him like a toppled box of marbles. There seemed to be four or five characters in this single, thinly drawn archetype, and we couldn't help but admire the bastard.