In one mile-long stretch of University Drive, you can sample some of South Florida's best banchan, cook your own eats on a tabletop grill, and score a giant jar of kimchi. Best-known among the cluster of Korean eateries here is Gabose, a 14-year-old landmark and the final foray in a series of establishments opened by James Soonkuk Hong and Eunsuk Hong. Today, the restaurant is run by their daughter and her husband, Susan and Fred Kim, who recently opened Gabose Pocha next door. Pocha is Susan's interpretation of a Korean pojangmacha — dubbed pocha for short — a reference to makeshift tents that serve nothing but grilled meats and the country's popular rice liquor, soju. Today, the pocha is a sort of Korean gastropub. Servers converse softly in Korean; a fish tank housing live sea snails gurgles near the exposed kitchen; and Hyuna, a spunky Korean pop singer, croons from the speakers. Start with a shrub, a Korean cocktail made from fermented fruit, vinegar, and soju — a distilled rice liquor more reminiscent of vodka than sake. Specials sometimes include fresh catches straight from Korea, like nakji (octopus), abalone, and sea cucumber. The rest of the menu is known as anju — a series of small plates meant to be eaten with plenty of liquor. Each is exotic and unfamiliar and requires some explaining. If you're feeling adventurous, beef intestine and chicken gizzard are racy options. Or try the gol bangee, a spicy escargot salad with carrot, cucumber, and cabbage slaw dressed in a pasty-thick sriracha-style sauce. 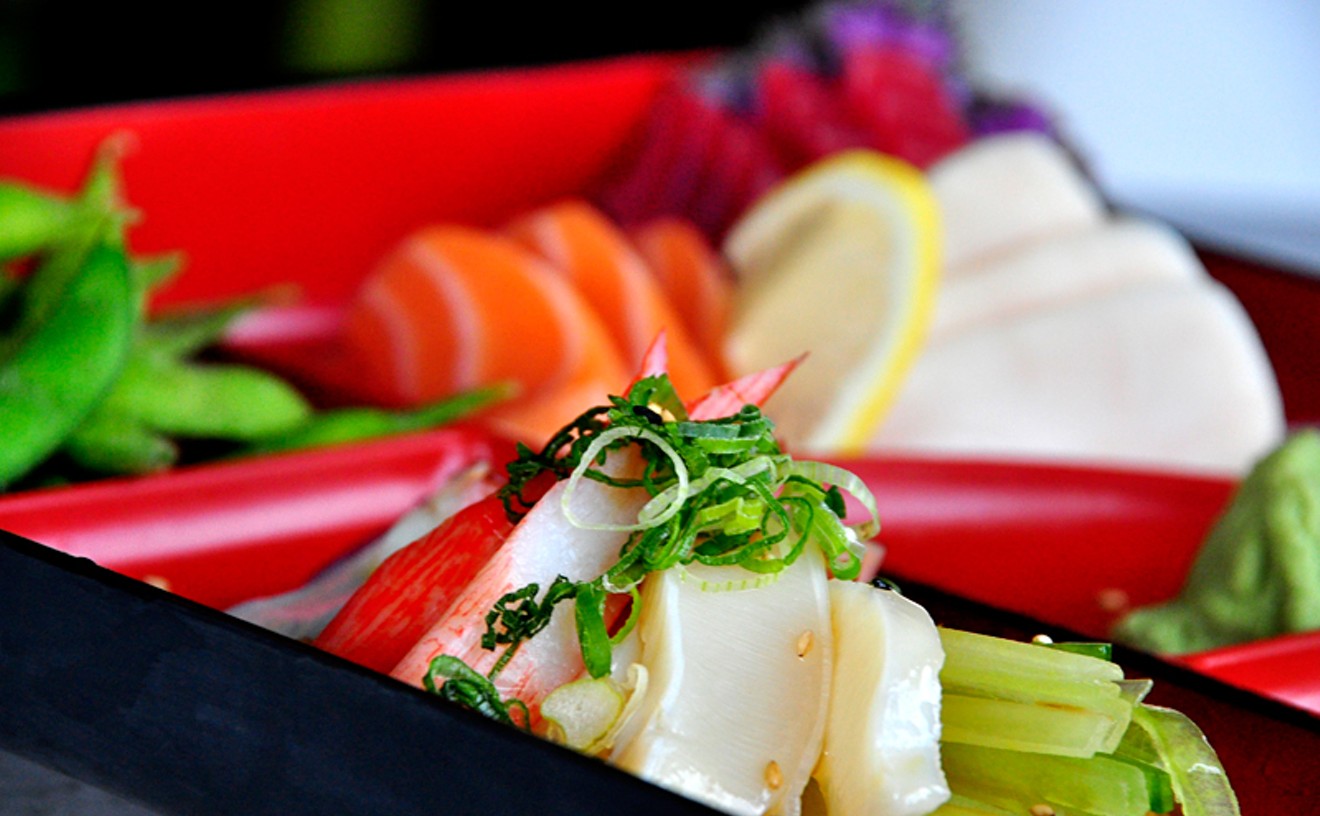 From Chiangmai special noodle soup to spice-packed curries, Thai food is a complicated choreography of ingredients like fish sauce, dried shrimp paste, and lemongrass combined with seemingly incongruous spices such as coriander and cinnamon. The best chefs tame the full spectrum of flavors into a single, harmonious finish. At Tamarind Asian Grill and Sushi Bar, that balance has been achieved by owner Khruawan Russmetes, a Thailand native well-versed in her country's cuisine. The tamarind at the front of the property — the flowering fruit tree used in cooking across southeast Asia — she planted herself after opening in 2001. Enormous fish-based platters include a crispy whole snapper, served at market price. The sushi menu offers more than 20 specialty rolls, including the house favorite, Tom's Dream Roll, named for longtime sushi chef Tom Nanongkhai. A few dishes vie for the title of most original, including Russmetes' Thai fries: cuts of boniato (a type of sweet potato) rolled in coconut flour and flash-fried.

We do miss the intrigue of this spot's first incarnation, tucked away in a little warren of commercial spaces in an anonymous office building on Federal Highway, around the corner from its current home. But while the atmosphere is less exotic, the service remains lovely, and the food has lost no flair. The pho — baseline marker in the evaluation of any Vietnamese kitchen — is impeccable, a glistening and delicate herbal broth rich with fine noodles and meats. The banh mi is first-rate, a crispy baguette piled with veggies and roast meats. The lemongrass dishes are peppery and pungent. The wide-ranging menu includes gluten-free and vegetarian dishes. Finish it off with bracing/sweet/syrupy Vietnamese iced coffee or bubble tea.

Can you afford to eat sushi every day? At Kevin's Sushi & Thai in Deerfield Beach, you can. Named for chef-owner Kevin Ongtua, this spot is tucked into yet another aging South Florida strip mall. Regulars have done a good job of keeping quiet about this sleeper sushi spot. They don't want you taking their seat at the sushi bar, ordering all the uni, or drinking up the last of the house pineapple-infused sake. Behind the sushi bar, the chef-owner prepares the restaurant's most impressive menu items: enormous sushi rolls the size of sand dollars. A rainbow roll that could probably feed a family of four is only ten bucks; a godzilla roll, $16. A whiteboard advertises specials, in Ongtua's handwriting, like frog legs, uni, and bluefin toro. The small kitchen also cranks out the standards, like homemade tom kha gai soup, or platters of seared wahoo tataki, thick cuts of fresh-sliced fish. Ongtua also makes his own pineapple-infused sake. 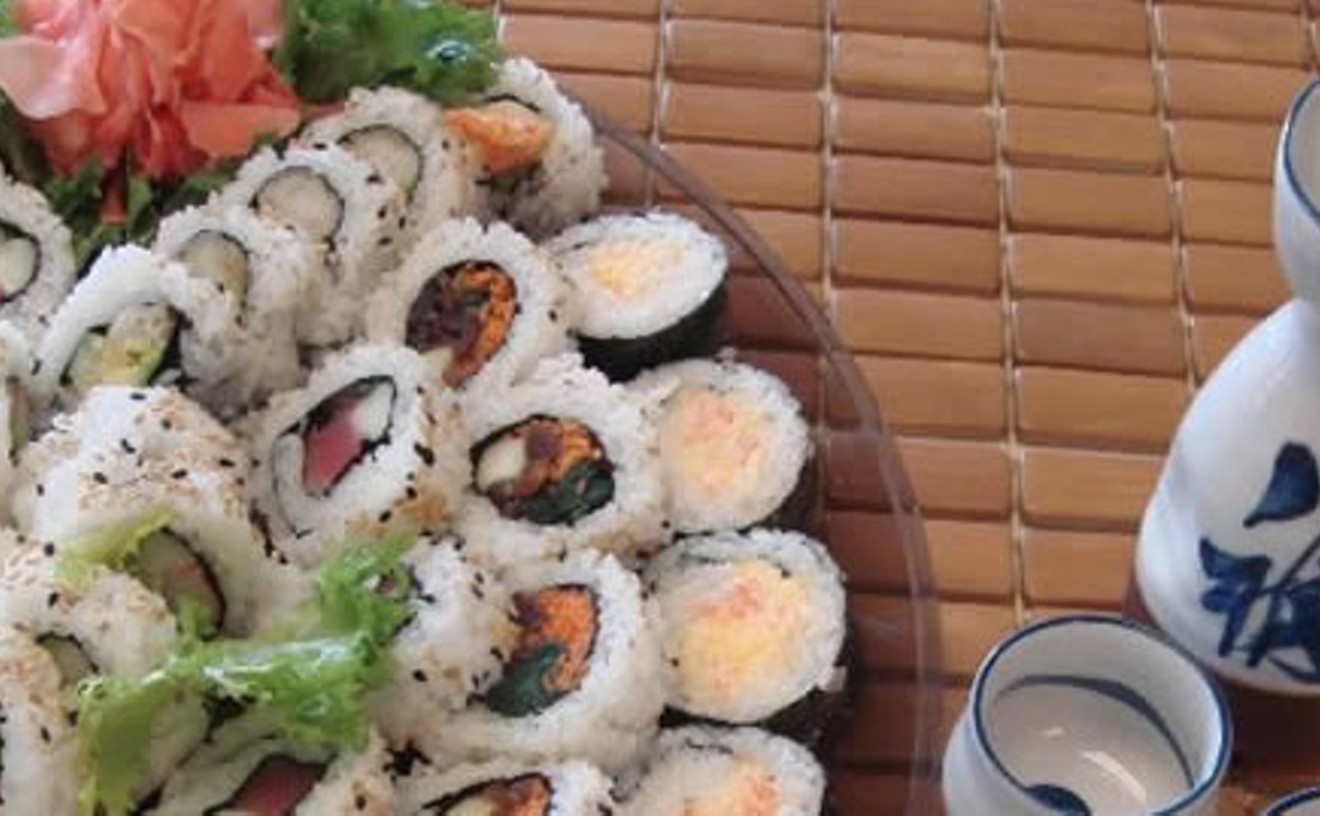 Nearly everything inside this store is a little treasure: decorative chopsticks, Japanese magazines, and a cooler full of sakes. Cute little mugs and earthenware dishes are functional and fun. A selection of Japanese junk food includes chocolate-covered Pocky sticks, wasabi peas, mochi ice cream, and shrimp chips. There's no fresh produce, but at the back, order cheap and fresh sushi takeout from a small counter. The Sunrise Roll is a house favorite, a simple and affordable mix of ruby-red tuna, white-ribbed salmon, electric orange masago (fish roe), bright-pink shibazuke (pickled vegetables including eggplant), and crisp cucumber. Japanese appetizers such as steamed edamame, miso soup, and seaweed salad round out the meal. But go early: The place is known to get busy during weekday lunch hours and on Friday or Saturday nights.

Hotel restaurants used to exist for the sole purpose of giving guests a place to satisfy their hunger without going outside. The Rusty Hook Tavern at the Sands Harbor Resort and Marina in Pompano Beach has flipped that script, even drawing locals to this hip waterside joint. A trio of industry veterans — Ned Jaouhar, Kareem Lakchira, and Andy Patton — has created a tavern-style establishment where locals and tourists alike can enjoy creative fare paired with a short list of cocktails and a selection of craft brews. On a beautiful day, the outdoor patio deck will be packed. Make it through the crowd and down a narrow set of steps and the hotel's pool deck offers uninterrupted views of the Intracoastal Waterway, as does the interior dining area. "Nibbles and bites" options include deviled eggs or meatballs; a surf 'n' turf entrée brings together ruby-red porcini-crusted tuna and melty, tender braised oxtail swimming in a rich wine reduction. If ripped jeans and flip-flops are your go-to getup, then the "handheld" offerings like tacos and sandwiches might be the best bet. With its tapas philosophy and cool-kid casual theme, the Rusty Hook Tavern presents the perfect escape from the doldrums of a long workweek or the chaos of a downtown weekend scene.

Two Georges at the Cove 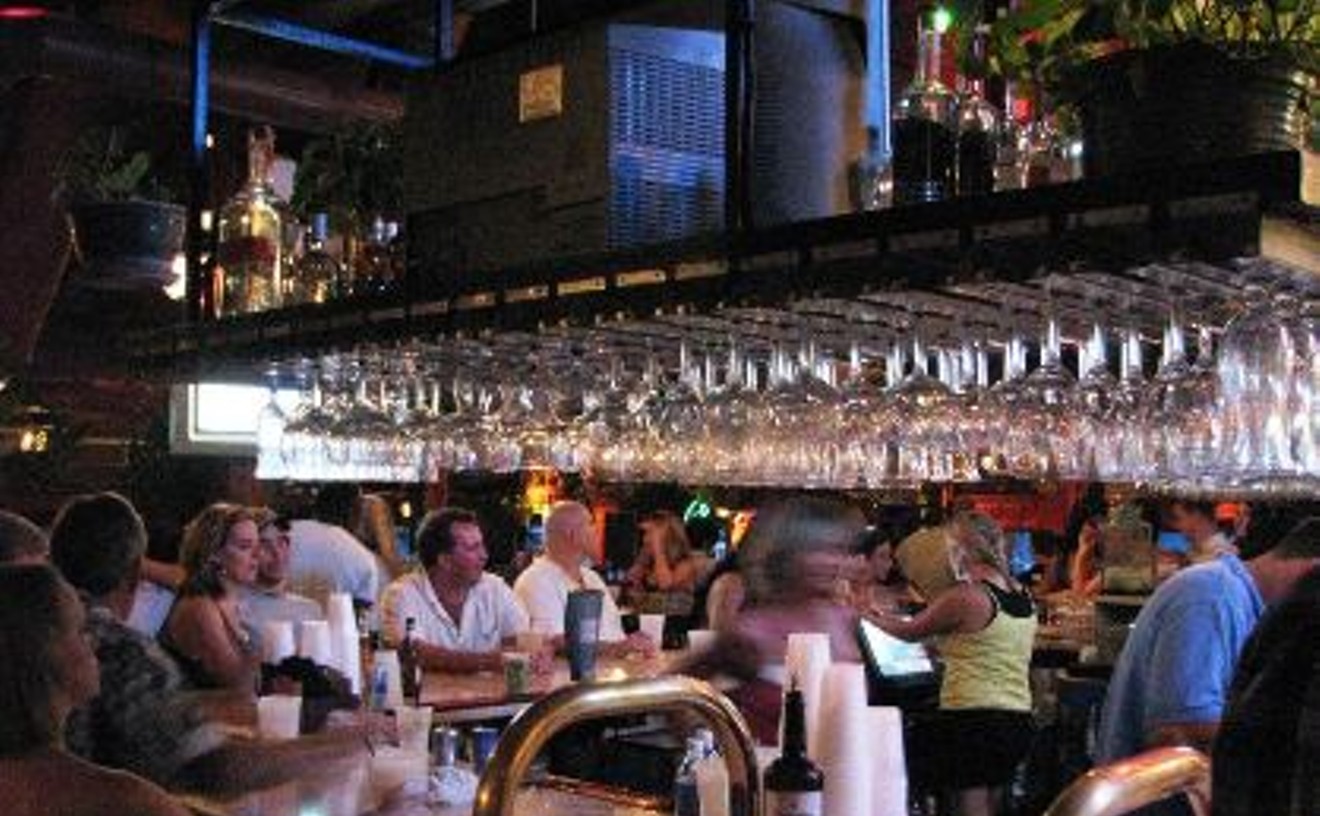 The best way to start off a meal is to arrive at the restaurant by boat. Two Georges makes that easy with its dockside location. Once inside, chow down on a fried seafood platter or sliders that complement the great beer selection — especially on a Friday after work, during the happening happy hour. This friendly vibe is encouraged with community-building events like fishing and golf tournaments and sporting events on TVs. This place is quintessential Florida — it feels like you took a drive to the Keys, but thankfully, you can hit up this place even without a five-hour trek.

"Cheap" and "seafood" usually don't mix well, except at Tark's. Located in a standalone building that's wrapped in a mural that might have been done by Guy Harvey when he was in middle school, this restaurant offers some of the best deals on quality seafood in South Florida. There's about to be a party in your tummy: smoked fish dip ($5.50) and free (!) orders of blue cheese and celery get things going, and a gator-tail dinner ($9.95) or bucket of steamers (three dozen for $25.95) raise the roof. Two-dollar drafts make this the closest thing we have to a heaven on Earth, and if you eat enough oysters (an aphrodisiac, ya know), the chick in the Salt Life shirt on the next stool might want to start talking fishing poles. 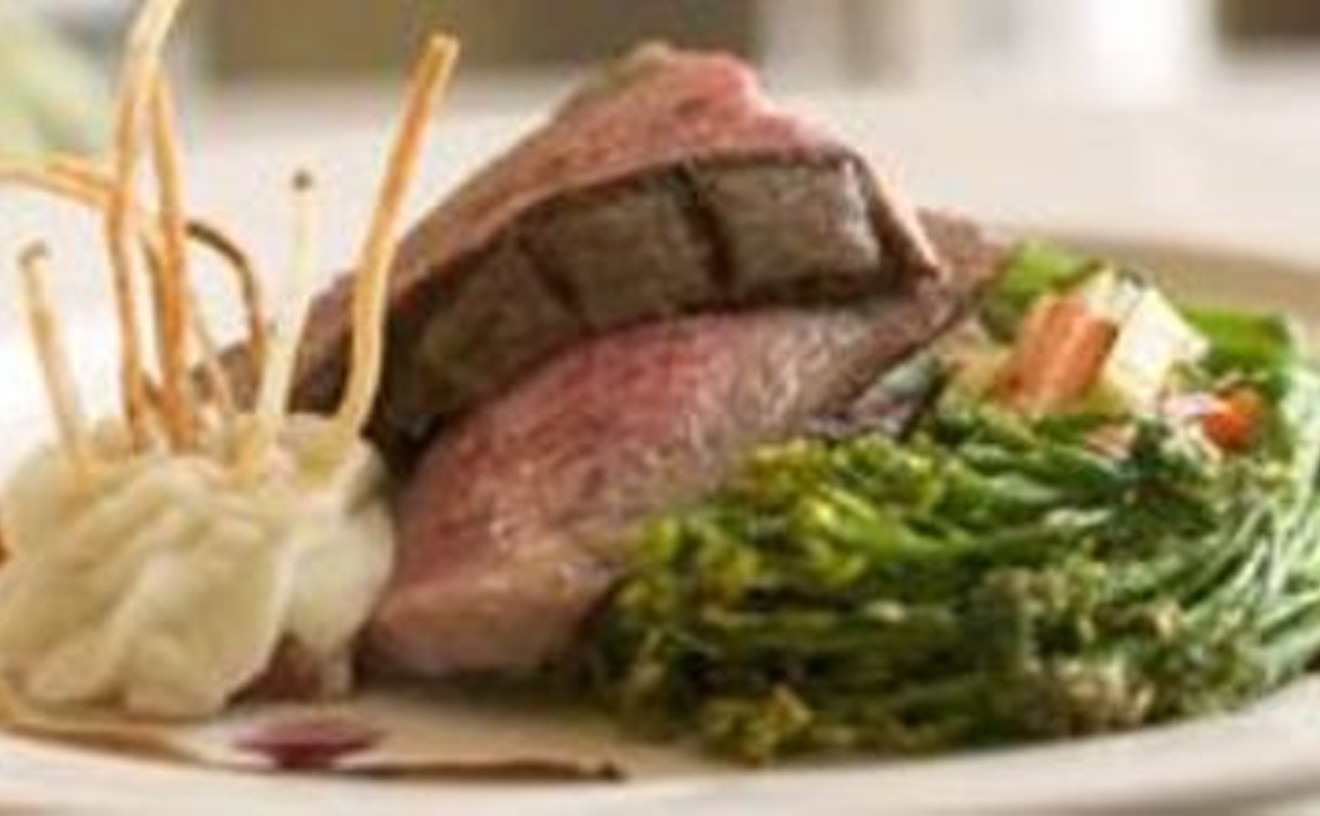 At home, chef-owner Giovanni Rocchio practices mixed martial arts and wrestling, but in his restaurant kitchen, it's all elegance: quail, turbot, foie gras, and handmade pasta. The chef is most famous for his casoncelli, wonton-shaped pasta stuffed with a rich veal and pancetta filling and served with a creamy brown butter sauce. The butternut squash tortilla is Rocchio's favorite, however: a dish inspired by a meal at the Michelin-starred Ristorante dal Pescatore in Northern Italy. Rocchio started working at his family's pizzeria as a kid, then at their white-tablecloth restaurant in Plantation before going in his own direction. His recipe for success: respect. "Respect for the product and respect for the customers. A good chef is only as good as his ingredients, and I want people to know they are getting the best. I'm always trying to do better. And that's the secret to anyone's success."

If only all things in life were like a Brazilian steak house. For the poor uninitiated, allow us to explain how such an establishment works. You are given a small button when you sit down at your table. One side means you don't want food; one side means you do. When you flip your button over to the food-wanting side, a swarm of meat-carrying hunks approaches your table, ready to carve off a slice of various steaks, pork, sausages, and chicken as soon as you approve. It's the closest you can get to feeling like a Roman emperor without getting arrested. If the world worked like this, any time you were stressed out, you'd only have to flip over a piece of paper and a masseuse would pop up and start working out those knots. Hung over? Give the signal and a team of quiet nurses would crawl out from under your bed with Advil, Gatorade, and Chipotle. At Chima, they do service better than anyone in town. Make a reservation today, and wear your fanciest sweatpants.