Barrel of Monks Brewing, home to a bevy of Belgian-inspired brews, is situated in an industrial park. Chandeliers hang from darkened ceilings, with red walls and brick bringing in splashes of sophisticated color to the space. Gray, silver, and chromed accents on chairs add a touch of Boca. At the forefront is a gray marbled bar top, a mirrored backsplash, and subtle but informative electronic tap lists that divulge everything about what's currently on tap and what people across social media have been saying about the beers and brewery. Toward one side of the taproom is a pseudo living room: big comfy couches surrounding an antique table and lit by an amazing beer-bottle light fixture. To call it an art installation wouldn't be doing it justice. The space is rounded out with a nook of soft benches and leather ottomans that allows intimate conversation and openness at the same time. Are we in Boca or Belgium? With enough time spent in this space, it's easy to forget. 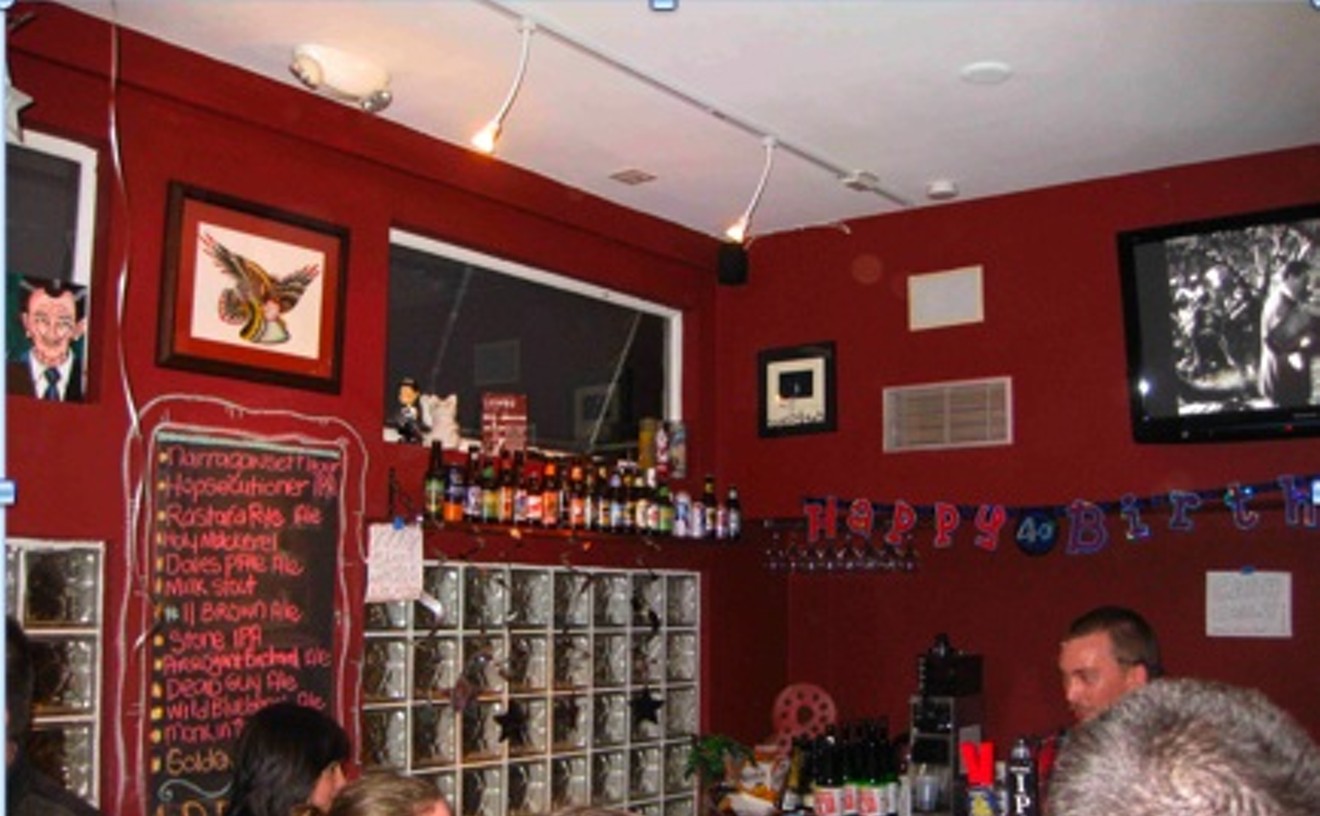 "No Jerks, Yes Beers." It's a motto that more bars should follow and fortunately is the cornerstone of Fort Lauderdale's Laser Wolf, a neighborhood craft-beer bar a coaster's throw from downtown near Sunrise Boulevard. The venue, which was opened by beer enthusiasts Chris and Jordan Bellus in 2011, has been slinging an outstanding selection of beers across its bar ever since its inception, and it continues to draw the local beer crowd. In addition, beer reps and industry veterans continuously call Laser Wolf home. The bar has famously become known as a place to find one-off kegs from Florida brewers and national brands alike. From PBR to Ballast Point's Grapefruit Sculpin and Cigar City Brewing's Florida Man Double IPA, Laser Wolf knows all are worthy of consumption. 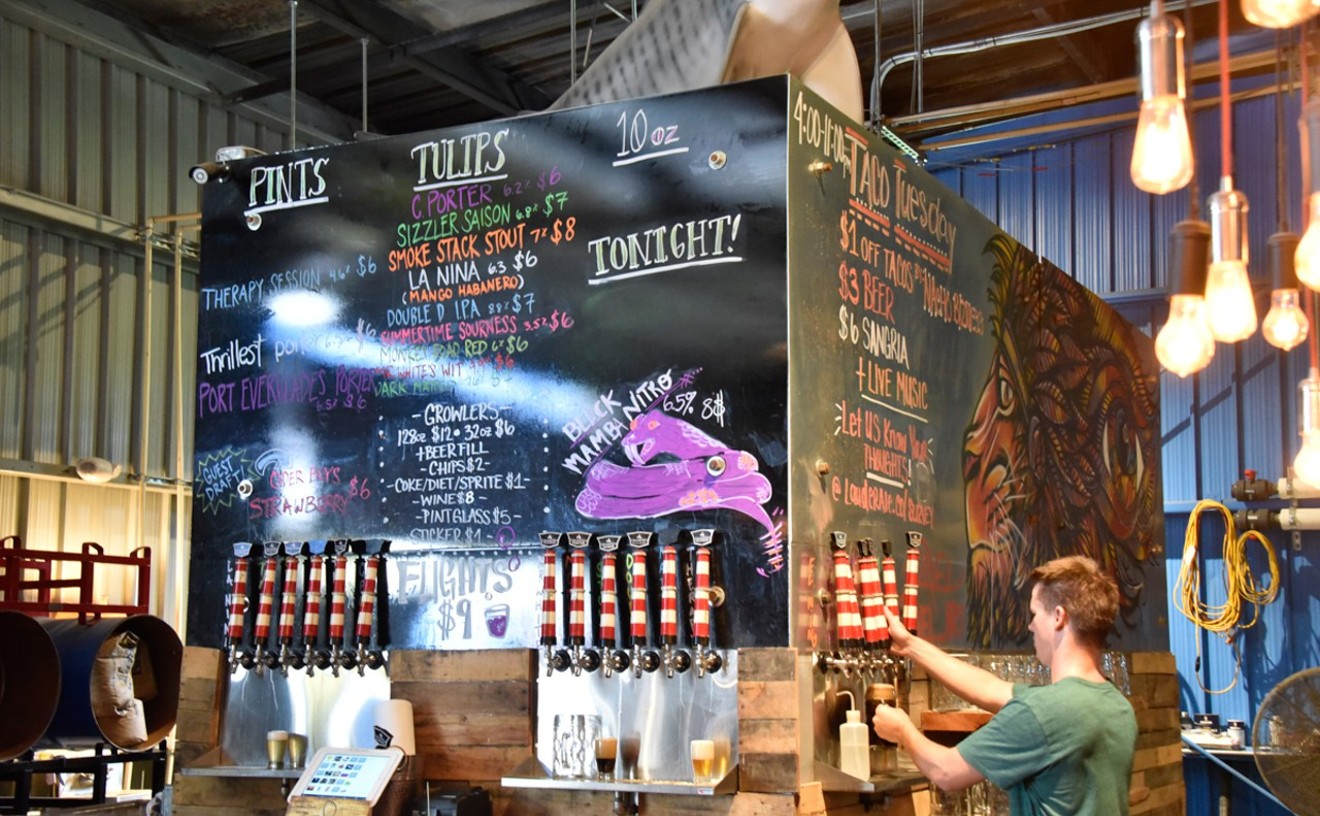 There's no place so quintessentially Broward as LauderAle Brewery. This warehouse-centered brewery took all the things Browardites love about South Florida and combined them in a location that's all the things we hate about it and came up with a winning combination. Natives Kyle Jones and Joey Farrell built the brewery in July 2014, putting together a collection of do-it-yourself-style fermentation chambers to whip up 20 barrels of beer per month for the thirsty public. From the robust English-styled Port Everglades Porter to the citrus-dominated Detour Double IPA and all styles in between, LauderAle is letting two Floridians live their dream of selling beer to an eager crowd. Of course, it's a bitch to get to, as the brewery lies at the easternmost terminus of 595, just as it transitions into a confusing spaghetti bowl of roads, detours, and ramps by Port Everglades. No matter, because when the people need beer, the people seek it out.

Fran Andrewlevich and Matt Webster built out Twisted Trunk Brewing in Palm Beach Gardens, a large-and-in-charge brewery nestled in the corner of an unassuming and generic strip mall on PGA Boulevard. Luckily, since almost everything is in a strip mall down here, we've realized that it's the inside that counts, and the inside is simply gorgeous. Dark wood covers the floors, metal and leather adorn the walls and chairs, and a floating bar tap system supplies beer from the cool rooms in the back to the tap handles up-front. It's not just aesthetically pleasing. Open since February, the brewery cranks out numerous styles of beers, each a remarkable take on the style in which it was crafted. Seemingly every beer that has come out exalts the virtues of its style. It's enjoyable to find an Irish red taste like it should and an English stout taste like it should. It is also enjoyable to find beers like the watermelon saison, which ends up being a solid saison with that balanced character of watermelon to it. This is what superior craftsmanship tastes like.

The South Florida craft-beer industry boomed in 2014, and Due South Brewing was a tremendous part of that growth. The brand skyrocketed this past year; its beer hit more and more shelves and taps around the state. From signature grapefruit-tinted IPAs to the famous Caramel Cream Ale, Due South is constantly kicking out quality beers that go head-to-head with any brewery in the country. The brewery — which you can visit and taste the beer straight from the barrel — offers a setting more like a family reunion than a traditional bar. The atmosphere and food trucks make for a festival-like feel. Whenever the brewery announces it's making a batch of Mariana Trench Imperial Stout, craft-beer experts flock to find it.