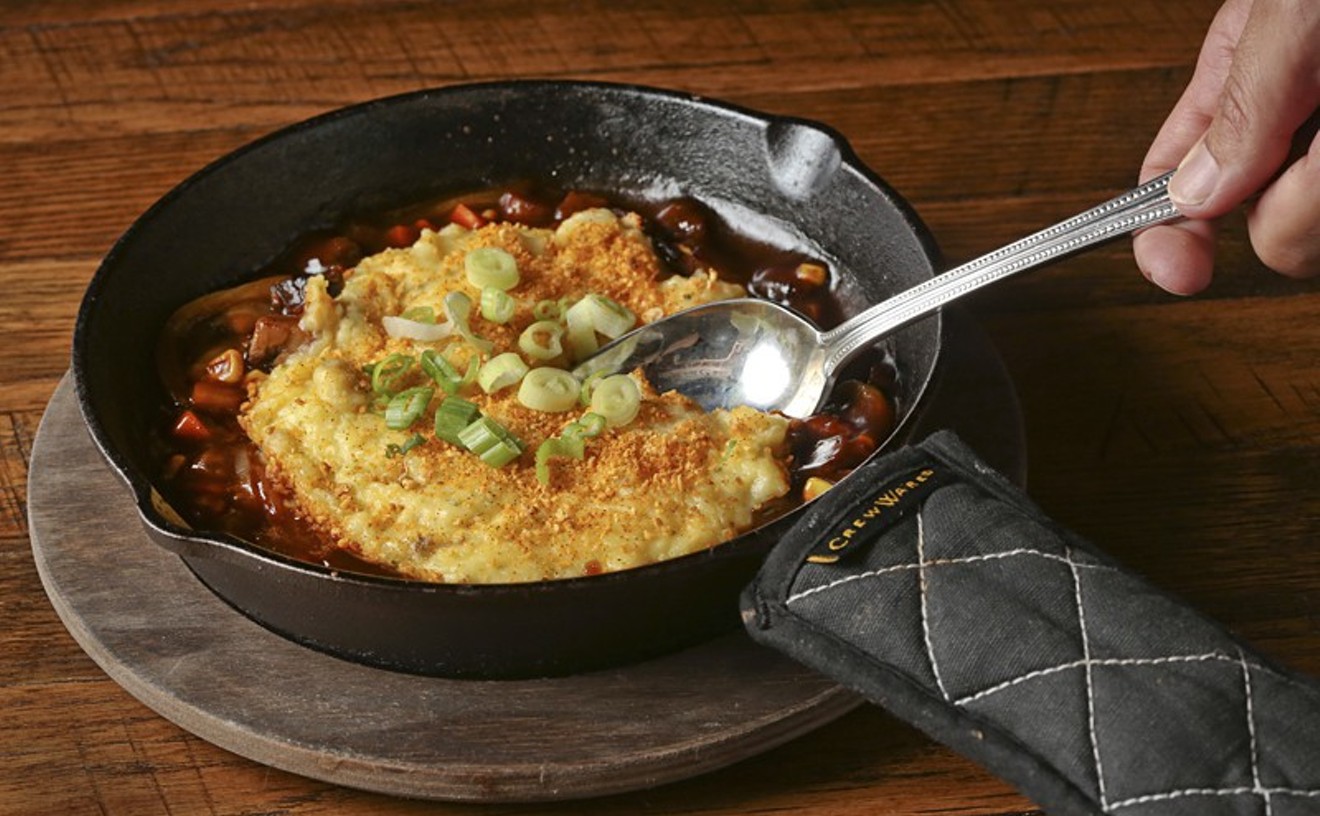 Chef Freddie Lawton fries up some of the best chicken wings, legs, thighs, and breasts south of the Mason-Dixie line. To make his birds moist and tender, chef Steve Shockey starts them in a bath in seasoned buttermilk for up to 24 hours. From there, it's all about the breading— flour, eggs, more buttermilk, and cornstarch, with just a touch of sugar for an extra crackly crunch. Then, the one step no one thinks about—smoking. Lawton gives his meat an extra dose of flavor with a slow turn in the smoker before it's dunked in the fryer. The result is Southern-style heaven: lip-smacking, tender chicken meat encased in a thin shell of golden-friend skin. As if that weren't decadent enough, the dish ($15) is served with a thick slice of creamy-soft cornbread pie and a side of warm honey for dipping. Be thankful for the warm wet napkin at the end of your meal. You'll need it. 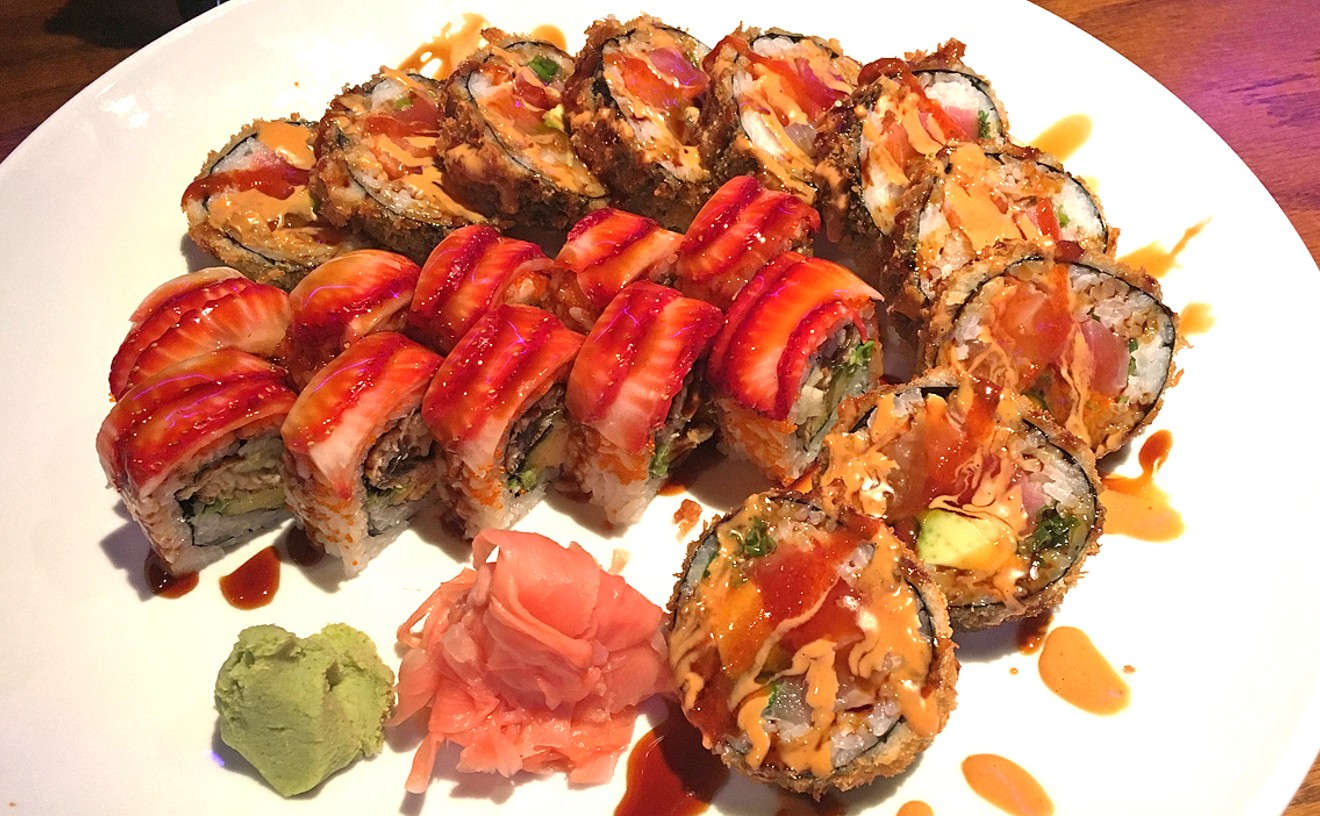 South Floridians love consistency. Parking is consistently bad. The beach is consistently eroding. Sawgrass Mills will consistently make you question the merits of capitalism. And Sushi Rock Cafe is consistently the best place to tuck in and order roll after roll of the freshest fish in town. This spot on Las Olas Boulevard may be tiny, but the portions are huge. And all of the showcase rolls—just like the waiters' T-shirts and the LP-lined walls—are in keeping with the restaurant's rock 'n' roll theme. Might we suggest the Red Hot Chili Peppers roll ($15), spicy tuna, scallions, and jalapeños topped with, yes, more spicy tuna and drizzled with sriracha. Or the Big Bopper roll ($18)—packed with raw salmon, tuna, and yellowtail snapper—which takes a Steven Tyler-type mouth to eat in one bite. If you're hungry for dinner, the trick is to show up by 6 p.m. to avoid the inevitable wait. Because guess what? Everybody else is in on this secret already.

Floridians can weed out the seafood restaurant pretenders from the contenders very quickly. Submarine Crab is most definitely on the contenders side and is, at this moment, the Seafood Champion of the WORLD. (OK... for now, just South Florida—but soon, the world!) Submarine Crab's nautical theme and fish tanks are great for putting you in the mood to crack some crab legs or gnaw on some crawfish. Delicious steamed pots of seafood that combine crisp corn and meaty potatoes are the gold standard here, but different mix-and-match combos also provide a unique dining experience.

Fish tacos may be the "of-fish-ial" food of South Florida. Nearly every seafood restaurant prepares its own version of this handheld staple. Some are packed with tilapia or cod. Others grill up grouper or mahi mahi. A few even put shrimp on the barbie. But at 50 Ocean, you won't find fish tacos on the menu. At least, not during the week. And you can't order them with the usual whitefish. Or cole slaw. Or salsa. Instead, the fine dining establishment on the second floor of Boston's on the Beach hooks weekend brunch customers with a breakfast version featuring Florida's favorite crustacean—lobster. The Sunrise Lobster Tacos combine light and fluffy scrambled eggs with a crispy potato pancake, thick-cut bacon, avocado relish, and chili aioli. And, of course, butter-poached lobster claws all wrapped up in a toasted tortilla. It's a fresh and simple take that works great with the spicy Grey Goose bloody mary bar or a side of sweet and salty chocolate bacon. Great seafood with an ocean view? You won't find that on every menu. Tacos are amazing—almost everyone can agree on that—but they can be boring and childish at the wrong place. Our parents fed us chicken or beef tacos our entire childhood. We had taco parties in college—still chicken or beef. We're full-blown adults now, adults that crave variety in our tacos. Thankfully, BC Tacos is driving around South Florida, reinvigorating adult taco eaters one customer at a time. The variety of the little shelled gifts that BC Taco is handing out of its food truck window on a daily basis is enough to make your head spin: shrimp, mahi mahi, pulled pork, fried avocado, steak, entire burger patties... Hell, they even have s'mores tacos. S'mores tacos!? What!?! BC Tacos fantastically uses social media to update customers on the location of the truck and even has a standalone store in Davie if you can't catch them on the run. BC Tacos made tacos in America great again! 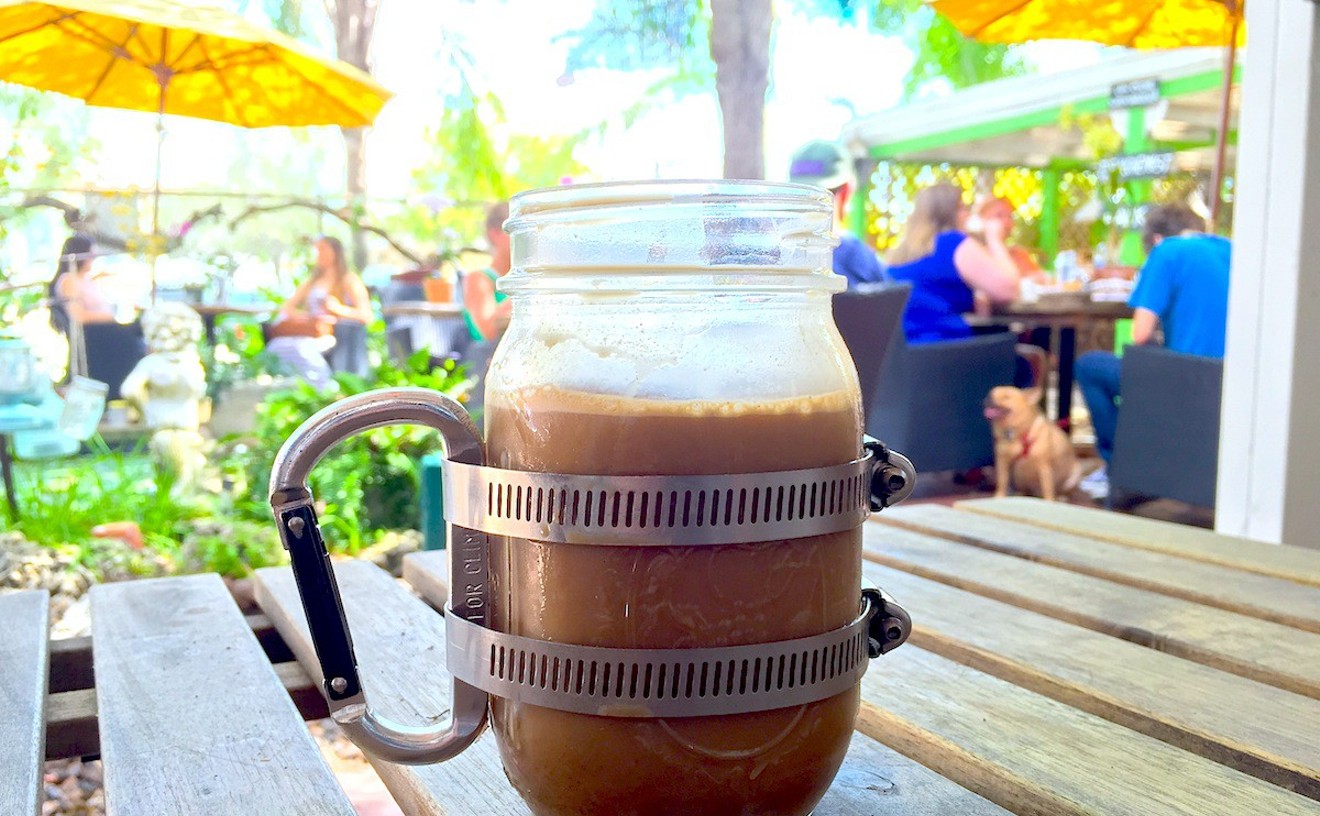 Outside, two roasters spin continuously on a small table. Inside, coffee bubbles in clear decanters atop glowing red burners. Cold brew sits in flasks. A freezer in the middle of the floor is filled to the brim with coffee cubes. And coffee scientists behind the bar turn coffee beans into some of the best beverages in South Florida. This small cottage is packed every morning with people seeking Mason jars full of Alchemist's concoctions. While you can get the usual cappuccinos and lattes, the lab mixes up better creations. The iced coffee blends 24-hour cold brew, condensed milk, and brown sugar. Become "Bulletproof" with a mixture of coffee, coconut oil, and grass-fed ghee (a clarified butter used in traditional medicines). If you're hungry, grab a Slicer, an open-faced sandwich with a topping like Nutella or avocado. Then, grab a seat on the outdoor patio and enjoy.

Almost everything on the menu at the Fresh Squeeze costs less than $8. Even better: Most of the items are meant to uplift one's mind and body. Drinks run the gamut from ginger and wheatgrass shots ($2.99) to more substantial options like the Revitalizer ($5.99), made with carrot, orange, lemon, pineapple, and ginger. The shop offers a full breakfast and lunch menu, with plates like avocado toast ($4.99), bagels, breakfast burritos, and a classic bacon egg and cheese on a toasted croissant ($5.99). Sandwiches and wraps ($6.99) can be loaded up with tuna, vegetables, cold cuts, and cheese. Cap off your meal with a Panther Coffee espresso shot or a cortadito.

When Louise Dutton was diagnosed with a wheat allergy, she decided to create gluten-free bread that tasted yummy— not the imitation cardboard commonly found in commercial stores. About a year later, she thought, "Why stop at bread?" Now, Weezie's Gluten Free Kitchen (which incorporates her childhood nickname) cranks out chocolate chip pancakes ($6) and cinnamon bun waffles ($10), plus breads, cookies, pies, and cakes, all GF. Her café is open every day except Monday, offering breakfast and lunch to hungry diners with a gluten intolerance—or those who are just curious how good gluten free can taste.

On October 18 of this year, Corey Jones was fatally shot by a plainclothes Palm Beach Gardens police officer. The 31-year-old drummer was waiting for a tow truck. His death struck a chord within the national debate about police officers' use of force, especially against people of color. But closer to home, in Delray Beach, Jones' passing resounds more deeply at an eatery along NE Second Street. At the New Vegan, Jones' cousin Rahein Jones and his wife Patricia carry on, serving superfood burgers, palm heart toona sandwiches, quinoa and falafel pastas, and walnut brownie desserts. Their food is all vegan, and some is even free of soy, wheat, gluten, and GMOs. They've even opened up a food truck. After Jones' death the shop closed for two weeks, and it's still hard not to think of Corey when the most popular side dish is Corey Rice, a recipe he conjured up of brown rice, peppers, and onions. "RIP Corey Jones" remains stenciled on the front door. 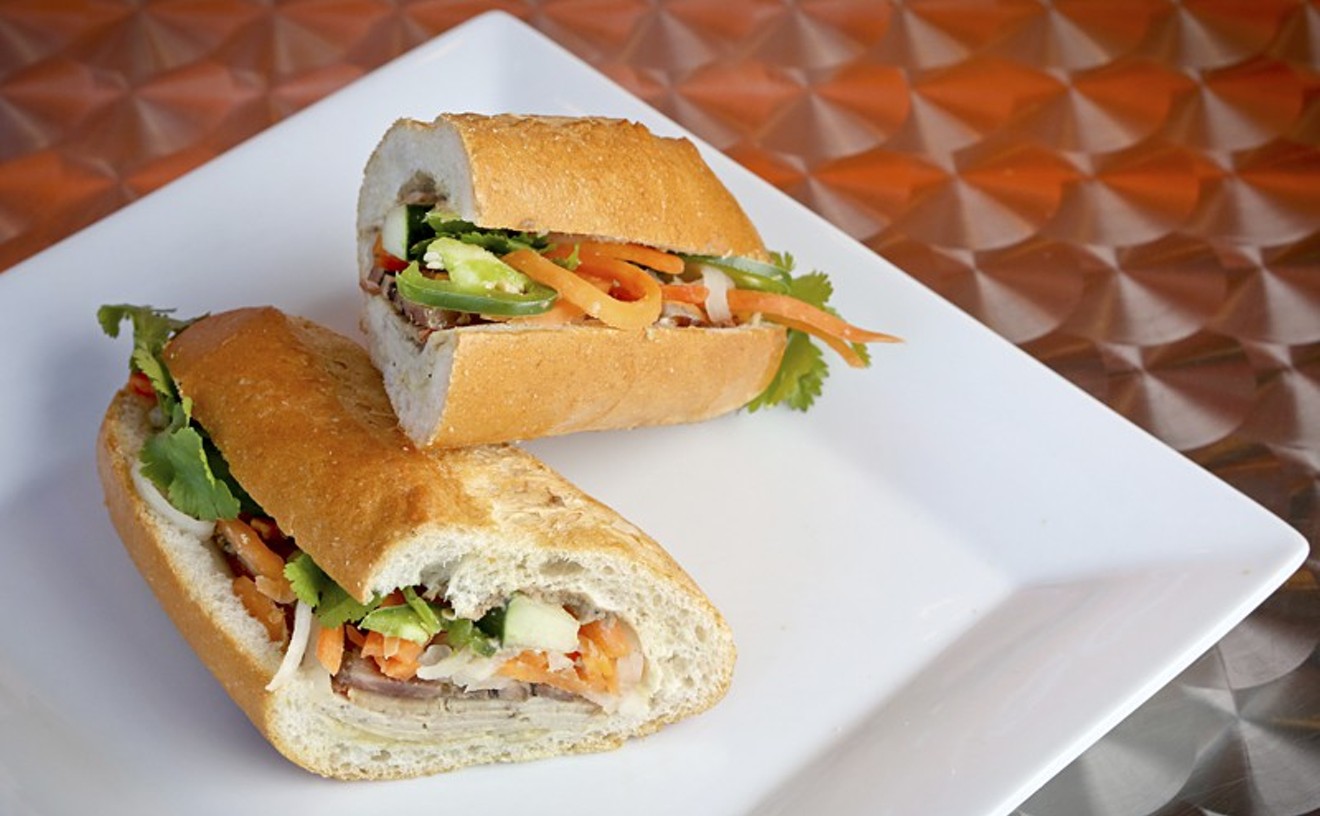 If you consider yourself a simple eater with an unrefined palate, the idea of a bánh mì spot for a cheap lunch might sound a bit intimidating. It's a lot less so when you discover a bánh mì is basically a big sandwich. A sub, a hoagie, a hero—it's a big sandwich on a long roll; there are few food items with which Americans are more comfortable. The bánh mì is the Vietnamese name for such a dish, made with a long French-inspired baguette, a cultural exchange from years of French colonialism. What sets the bánh mì apart at places like 545° Bánh Mì Cafe in Davie is the filling. For just $4, order the Korean BBQ Beef, the Curry Lemongrass Tofu, or the Headcheese & Pate. If you're looking for something more familiar, go for the pork meatball or the marinated grilled chicken. Every sandwich comes with the optional toppings of pickled carrots and daikon (a kind of radish), cilantro, cucumber, jalapeño, and a housemade mayonnaise. They even have a loyalty program in which you order 10 sandwiches and get the 11th one free. So, break out of your sandwich rut, simple eaters. Be brave—but still cheap.