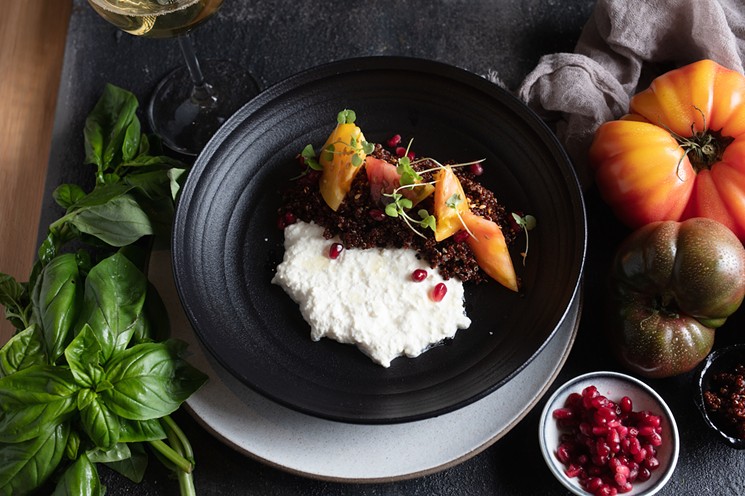 Photo by Libby Volgyes
It's impossible to talk about chef David Schiraldo without discussing his love for food. Born into an Italian family who nurtured his desire for cooking, he can't recall a time in his life when he wasn't in the kitchen developing and perfecting recipes — especially his mother's.

"She's the best cook in the world and I still can't replicate some of her dishes," says the New Jersey native. His passion is reflected on the menu at the newly opened the Restaurant at the Norton Museum in West Palm Beach, where he is the executive chef.

The eatery, part of the museum's $100 million , is a 165-seat restaurant inside a bright, modern dining room, decorated with art pieces and a video installation by artist Gregory Scott. The floor-to-ceiling windows overlook the tables set in the outdoor dining area, looking out over the garden. The Restaurant is operated by the Constellation Culinary Group, the team behind Verde at Peréz Art Museum Miami.

joined the group two years ago after working at Morimoto New York, Café Chloe French Bistro in San Diego, and Souzai Sushi in New Jersey. With Constellation, he garnered experience in cultural venues like the New-York Historical Society, Carnegie Hall, and Art Basel Miami Beach. At the Restaurant, he explains, the menu was designed not only to tap into the palate of the museum's visitors but also to cater to locals at large.

Foodies don't have to pay the entrance fee to sit down for a meal. And the menu of light, modern American fare includes dishes that are relatively familiar but executed with modern cooking techniques and style. "We didn’t want to alienate the local community,"  says. 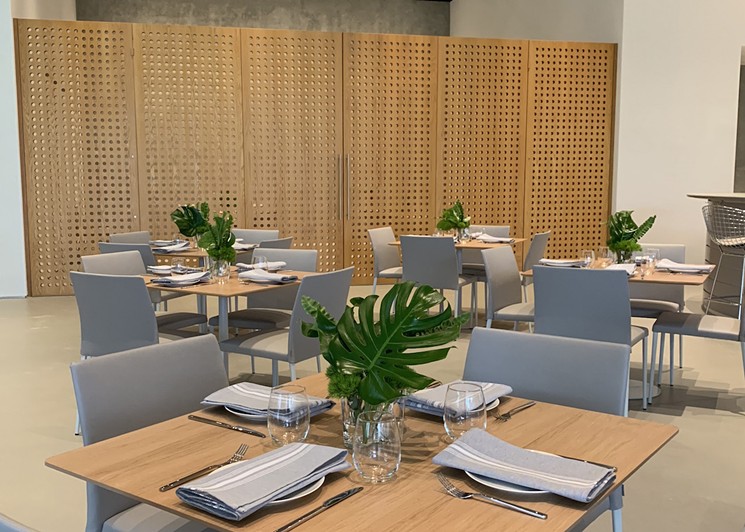 Sweet endings include the Bananas Foster milkshake — a nod to Norman Foster, the architect behind the museum’s expansion — made with caramelized bananas, graham cracker rim and salted caramel whipped cream ($15); and the Floating Island, which is warm passion fruit and white chocolate sauce, mango meringue, fresh berries, and almond streusel ($12). There's also the Hope’s Sundae, made with vanilla bean ice cream, brownie bites, fresh marshmallow and warm chocolate ganache ($9). It's named after Hope Alswang, the museum's executive director and CEO.

The list of libations includes the Lavender Collins, a mix of Hendricks gin, lemon juice, lavender syrup, sparkling water, and garnished with a fresh lavender sprig ($15); and the Bamboo cocktail, made with Manzanilla sherry, Mattei Cap Corse Quinquina, Cocchi Vermouth di Torino, Bittercube trinity bitters, and fresh orange ($9). Guests can also build their own negroni or old-fashioned with their choice of spirit and bitters ($15) and the wine program features Old and New World wines.

The Restaurant is open for lunch every day of the week except for Wednesdays and will also serve dinner on Fridays in conjunction with the museum's weekly Art After Dark, a series of artists' talks, musical performances, and film screenings on the lawn. A weekend brunch service is also in the works.