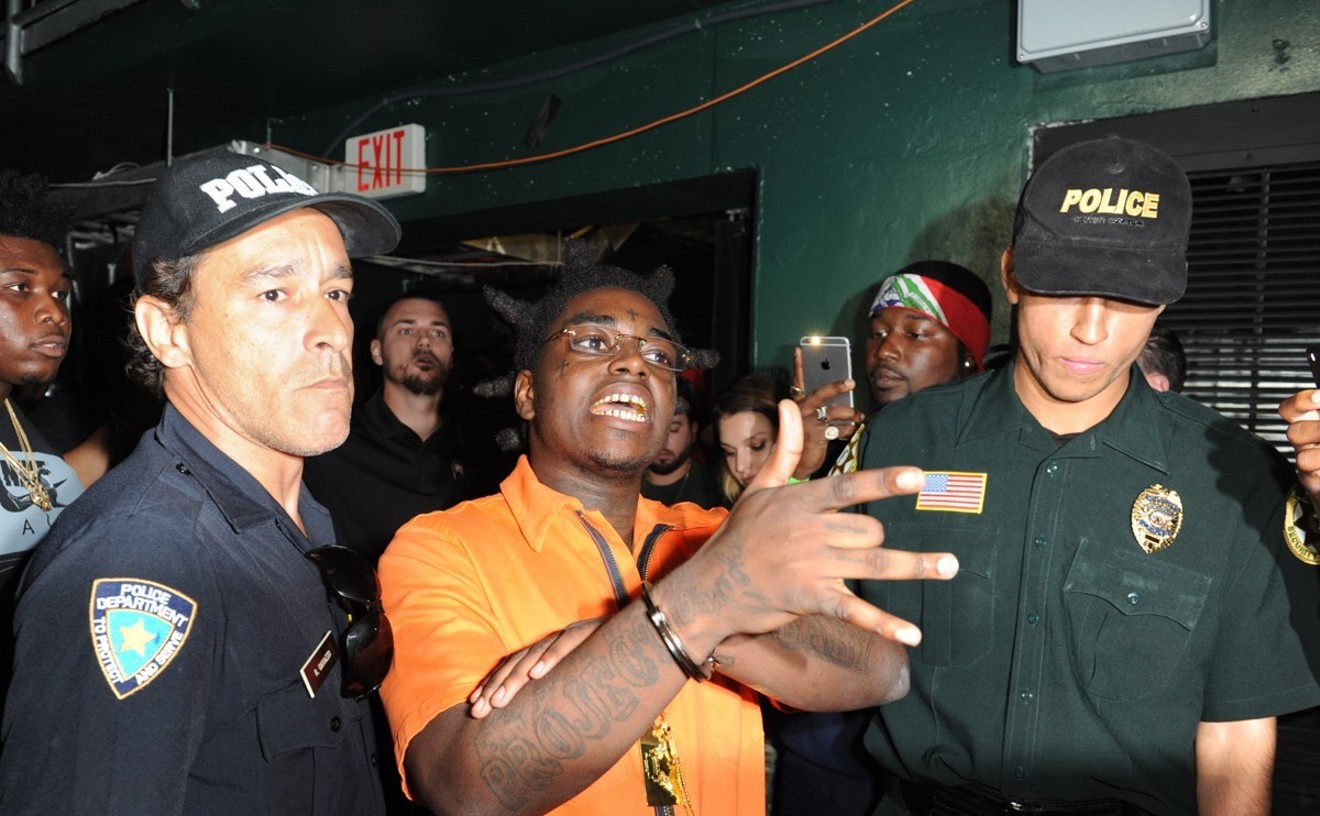 Michele Eve Sandberg
Kodak Black poked fun at his legal problems when he posed as a prisoner before his show at the Watsco Center in 2017.
Some music artists have a harder time staying on the right side of the law than others. In the South Florida hip-hop scene, Kodak Black is one of the more frequent offenders. His legal troubles have persisted for years, and though it’s hard to say to what degree his problems have stunted his career, they're certainly not helping.

For those trying to keep up, here’s a comprehensive list of Kodak Black’s run-ins with the law.

October 2015: Arrest for kidnapping, battery, and other charges

At 18 years old, Kodak Black was beginning to make waves in the Florida hip-hop world after his breakout hit “Skrt” debuted on Drake’s OVO Beats 1 Radio station. That's when he faced his first arrest in the spotlight. Kodak, born Dieuson Octave in Pompano Beach, was arrested for assault, robbery, kidnapping, false imprisonment, driving with a suspended license, and possession of marijuana after being accused of forcing several people into his car because he suspected someone broke into his Broward County home. He was released on bond soon thereafter.

Just two months after he was charged with drug possession in addition to more severe crimes, Kodak was arrested in St. Lucie County for possession of less than two pounds of marijuana. He also was charged for having drug paraphernalia on him.

In a case yet to be resolved, Kodak Black allegedly assaulted a young woman in Florence, South Carolina. The woman reportedly accompanied him to his hotel room after his show at the nightclub Treasure City. Soon after entering the room, she said, the rapper ripped off her clothes, bit her, and raped her. He was charged with criminal sexual misconduct. Shortly after the Florence incident, Kodak was allegedly seen buying marijuana from a drug dealer; he then got in his car and drove away. When police tried to pull him over, he attempted to evade arrest and threw a gun from his car, according to the cops. After recovering a loaded .40-caliber Glock 23 pistol, they arrested Kodak for possessing a weapon by a convicted felon, possession of marijuana, and a number of traffic violations.

May 2016: Arrest in Broward County

According to XXL, Kodak was arrested again in Broward County, this time in connection with open warrants related to the previous charges of false imprisonment and armed robbery.

While he was in jail for this arrest, outstanding warrants for the criminal sexual misconduct case in Florence and the marijuana possession charge from December 2015 were brought to light.

After three months in jail, Kodak was sentenced in August to one year of house arrest and five years of probation. He was also reportedly ordered to complete community service, anger management, and community control supervision programs.

However, before he could be placed on house arrest, the open warrants for the St. Lucie County drug possession arrest halted his release. In addition to that warrant, his charge of criminal sexual misconduct in the Florence case was changed to sexual battery, which carries a penalty of up to 30 years in prison.

A month later, in September, he pleaded no contest to the St. Lucie possession case and was sentenced to 120 days in prison.

Kodak Black was released from a St. Lucie County jail and extradited to South Carolina to face the sexual battery charge.

As predicted by his lawyers, Kodak was freed from a South Carolina jail after posting a $100,000 bond for the sexual battery charge. He posted on Instagram that he was “happy to finally be going home to family and friends” and that he looked forward to clearing his name “in the very near future.” 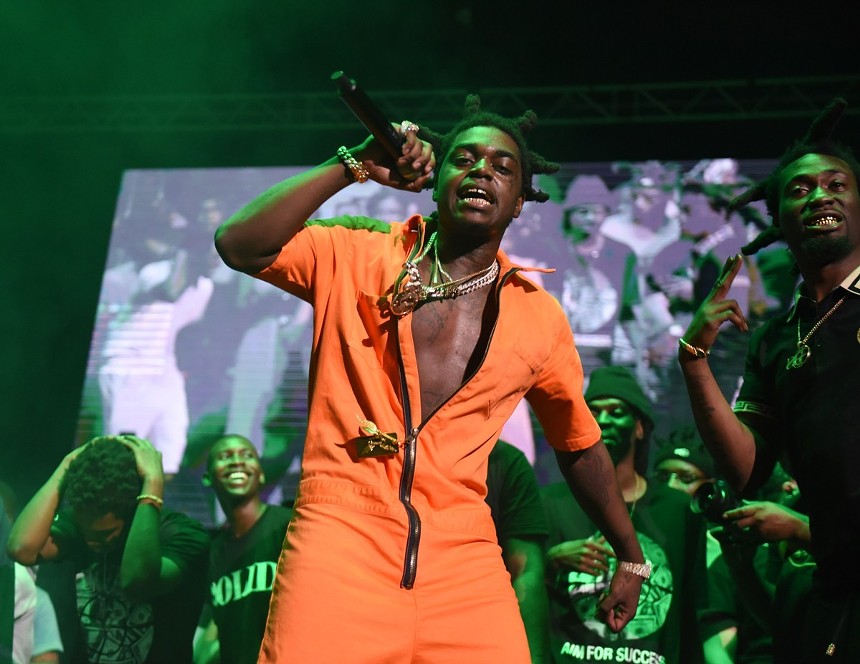 After appearing in court in Broward, Kodak was arrested for violating the terms of his house arrest related to the charges of false imprisonment in May 2016.

The decision to take him into custody was bolstered by his alleged assault of a bartender at Club Climaxx in Miami earlier in February. Charges weren’t formally filed against him, but the woman identified Kodak as the man who punched and kicked her at the club, and the police incident report was presented in court.

Between April 21 and May 4, Kodak was embroiled in a number of legal issues.

On April 21, he was accused of grabbing his anger management counselor by the arm after she threatened to call 911 when he refused to leave a session. She reportedly asked him to leave because he was “intentionally disrupting” the session by “burping repeatedly.”

Five days later, on April 26, he was found guilty on five counts of violating his house arrest.

On May 4, he was sentenced to 364 days in prison with the possibility of early release if he completed a life skills course. He successfully finished the course and was released in June after serving 97 days.

Despite some legal issues regarding child support for his son, Kodak steered clear of the courthouse for the remainder of 2017 after his release from jail. That changed January 18, 2018, when police were alerted to a live stream on Kodak Black’s Instagram feed. The video showed the rapper in his Broward home, surrounded by drugs and weapons with his child nearby.

He was arrested for grand theft of a firearm, two charges of possession of a weapon or ammo by a Florida delinquent adult felon, possession of cannabis over 20 grams, child neglect without great bodily harm, and two counts of parole violation, according to XXL.

A month later, his lawyers were able to get the charges of grand theft, child neglect, and possession of a weapon by a felon dropped. 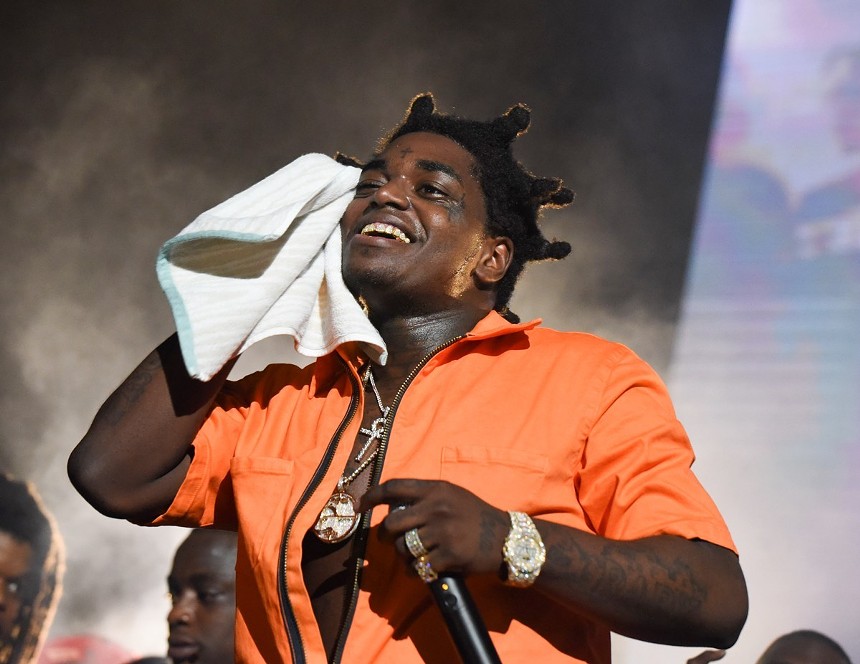 Kodak Black entered a plea of not guilty and was again sentenced to 364 days in prison for the remaining charges stemming from his January arrest. He got credit for 90 days of time served in jail while awaiting trial, so he was released in August of that year.

During that stint in jail, Kodak seemed to be trying hard to turn his life around: He earned a GED, changed his legal name to Bill K. Kapri, and even tweeted about writing a book.

Shortly after his release, it was revealed he was also let off probation, truly cementing his freedom.

For a while, things quieted down for Kodak as he continued to release hit songs and collaborate with exciting artists.

However, things once again spiraled downward that spring. In April, Kodak was supposed to face trial on his sexual battery case in South Carolina, but the case was postponed and a new date has yet to be set. That month, he was arrested in New York, and less than a month later, he was arrested in Miami.

This past April, Kodak Black and three others were apprehended by U.S. Customs and Border Protection agents while trying to cross into Canada from New York. He was found with a Glock 9mm pistol and marijuana and was taken to the Niagara County Jail.

Then, less than a month later, he was arrested for weapons possession in Miami. Just before he was set to take the stage at the hip-hop music festival Rolling Loud, he was apprehended by U.S. marshals for state and federal firearms violations following what was described as an “extensive investigation.”

He has since put up his $600,000 Broward home as collateral for his half-million-dollar bail, but prosecutors are arguing he should remain in jail as a “threat to society.” If convicted, he could face up to ten years behind bars.