A Look at the Hard Rock's Guitar-Shaped Resort: 16 Restaurants, 20 Bars, and Overwater Villas

Seminole Hard Rock Hotel & Casino
An artist's rendering of the Seminole Hard Rock Hotel & Casino's guitar-shaped hotel, which is set to open October 24.
Commuters on the Turnpike have watched the Seminole Hard Rock's guitar-shaped hotel take form over the past couple of years. For some, the massive structure is a welcome addition to the Hollywood skyline, which is not as immediately recognizable as that of Miami or Fort Lauderdale. For others, the ostentatious design seems out of place, as if it were plucked from the gaudy Vegas strip and plunked next to a South Florida highway.

At twin news conferences this week, the hotel's management announced its ambitious plans for the enormous structure. The mammoth resort will integrate three hotel towers for a total of more than 1,200 guest rooms. Outfitted with floor-to-ceiling windows, the 450-foot-tall guitar-shaped hotel alone will hold 638 luxury guest rooms. A scale model of the Seminole Hard Rock Hollywood's upgraded resort.
Photo by Juliana Accioly
The seven-story Oasis Tower, with 168 guest rooms, will overlook a new 13.5-acre pool lagoon with three waterfront areas including a beach-style experience, private lagoon-style settings amid waterfalls, and a large expanse as long as three football fields with water activities such as canoeing and paddleboarding. There will also be a Bora Bora-style experience with 450-to-800-square-foot overwater villas featuring personal plunge pools and butler service.

The resort will also boast 16 restaurants and 20 bars, a new spa, a day pool with a club atmosphere, meeting and convention space, a state-of-the-art entertainment venue, a manmade lake, a ballroom, and 26,000 square feet of retail shops. A highlight is the Oculus, a central feature at the entrance of the guitar-shaped hotel, encompassing greenery, sound, light, water, and choreography. 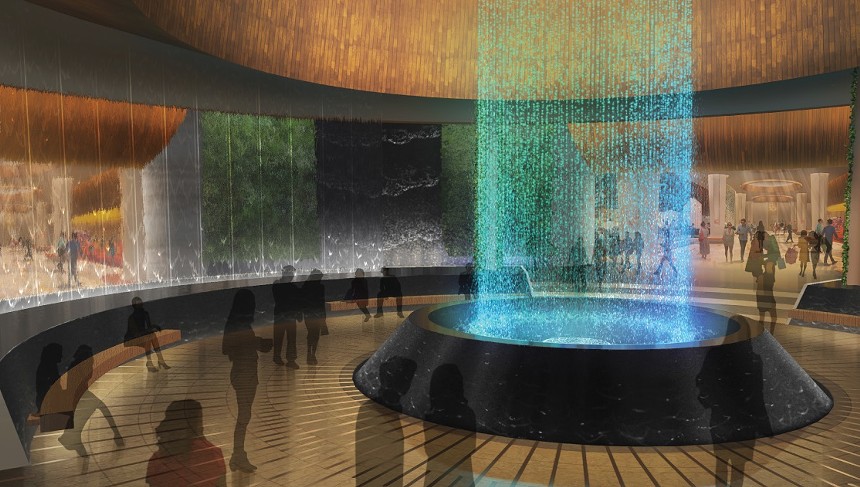 An artist's rendering of the Oculus at the entrance of the Hard Rock's guitar-shaped hotel.
Seminole Hard Rock Hotel & Casino
Jim Allen, chairman of Hard Rock International and chief executive officer of Seminole Gaming, explained that the guitar-shaped structure is designed to withstand a Category 4 hurricane, the debut was delayed to avoid the peak of hurricane season. The grand opening of the property is set for October 24.

The grand opening of the 6,500-seat concert venue Hard Rock Live will happen the following day, with Maroon 5 as the opening act. The venue is projected to book 100 shows a year, including music, comedy, boxing, and other sporting events. On the current schedule are a concert by Andrea Bocelli November 7 and Super Bowl 2020 events.

In addition, the casino gaming floor will also offer 193 table games, a 46-table poker room, and more than 3,000 slot machines.

Allen said more dollars are being spent in Native American casinos than commercial ones, but no revenue estimates were provided at today's news conference.