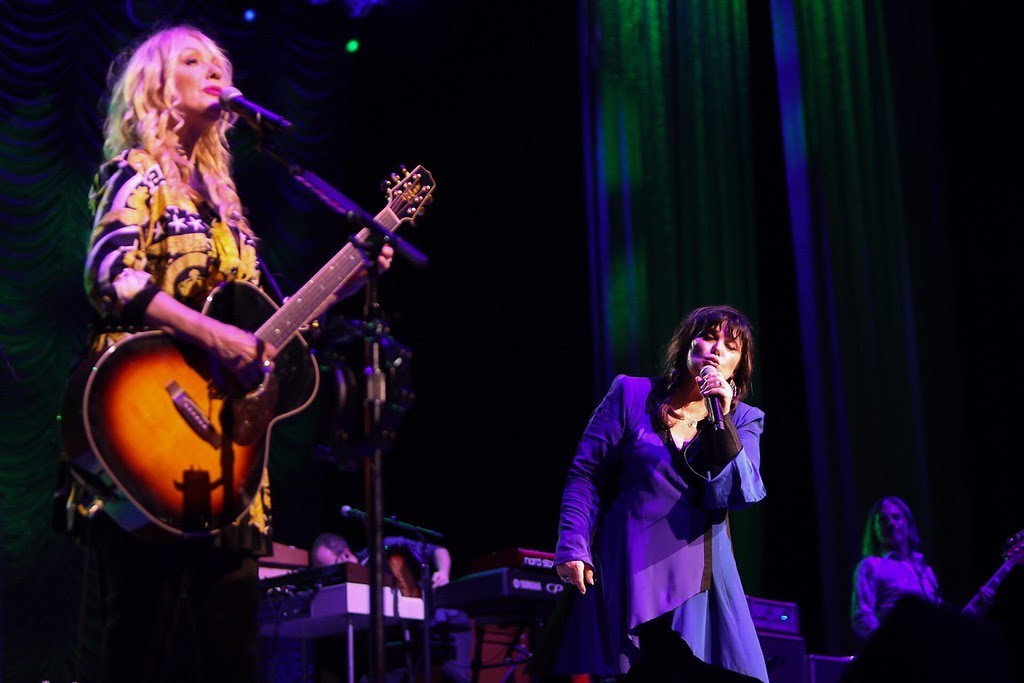 There’s a full moon on Thursday, but things don’t have to be weird. In fact, they can be quite fun. Conrad Fort Lauderdale Beach is hosting a Full Moon Rosé Soiree on its sixth-floor Skydeck, where you can soak up the moonlight and awesome offerings. There will be all kinds of Absolut vodka and rosé yumminess to enjoy, including a strawberry-infused cocktail bar and a Sweet Melody ice cream cocktail. Just make sure you visit the self-touted "Ultimate Selfie Station" before you over imbibe. 6 p.m. Thursday at Conrad Fort Lauderdale Beach, 551 N. Fort Lauderdale Beach Blvd., Fort Lauderdale; 954-414-5100; conradfortlauderdale.com. Admission is free with RSVP via eventbrite.com

Roll out the red carpet, because some rock 'n' roll royalty is hitting WPB on Friday. The one and only Heart, fronted by sisters Ann and Nancy Wilson, is making a pit stop with its Love Alive tour. And, yes folks, after a multi-year hiatus, Heart is very alive and well here in 2019. Count on all the classics from “These Dreams” to “Who Will You Run To” to “Alone.” 7 p.m. Friday at Coral Sky Amphitheatre, 601-7 Sansburys Way, West Palm Beach; 561-795-8883; livenation.com. Tickets cost $29.50 to $129.50 via livenation.com.
Saturday, August 17

If anyone in today’s music biz was going to step in and do Freddy Mercury justice, it had to be Adam Lambert. Well, fortunately that happened, and the former Idol is now touring with Queen. Queen + Adam Lambert will rock the BB&T Center on Saturday, bringing all the classics from “We Will Rock You” to “Bohemian Rhapsody.” In addition to the timeless tunes, the band dropped a listen-worthy live album back in 2016. 8 p.m. Saturday at BB&T Center, 1 Panther Pkwy., Sunrise; 954-835-7000; thebbtcenter.com. Sold out.

If you’ve been slacking on hitting up the International Ballet Festival of Miami (with events in Broward, too!), Sunday is your last chance! Among your final options, there is a Gala of the Stars happening Sunday at 5 p.m. at Miami Dade County Auditorium. At this cultural spectacle, you can catch ballet stars from Brazil, Germany, Hungary, Slovenia, Mexico, the U.S. and a slew of other countries. Through Sunday at various locations throughout Miami, Miami Beach, and Broward County; internationalballetfestival.org. Event prices vary.

So that whole 50th anniversary Woodstock concert got scrapped. Wah. But, there is a local festival option to rock the F out and get your reflective self rockin’. Yay! Hippiefest lands at Broward Center on Sunday, loaded with sets from some of your flower-power heyday. Among the performers – many of whom will be paying tribute to the 50th anniversary of Woodstock – are Ten Years After, Big Brother & The Holding Company and Vanilla Fudge. 6:30 p.m. Sunday at Au-Rene Theater at The Broward Center for the Performing Arts, 201 SW 5th Ave., Fort Lauderdale; 954-462-0222; browardcenter.org. Tickets cost $39 to $69 via ticketmaster.com.

Blue Martini has quickly become a place to be (and rock) on Mondays. Every Monday there’s a Spread the Love event with Spread the Dub at the cocktail haven’s West Palm Beach location. You’ll always leave one of the seven-some's shows jammin’, thanks to its self-described “Feel Good Reggae” vibe. In addition to the tunes, you’ll want to bring your beer pong, corn hole, and flip cup A-game, too. 9:30 p.m. Monday at Blue Martini West Palm Beach, 550 S. Rosemary Ave., West Palm Beach; 561-835-8601; westpalmbeach.bluemartini.com. Admission is free with RSVP via eventbrite.com.

The Boca Raton Museum of Art continues to host totally rad exhibits. The newest one, Carol Prusa: Dark Light, keeps that trend going strong. It opens Tuesday and honors a selection of amazing women astronomers who have helped map the stars. A Boca Raton resident and FAU art professor, Prusa handmade each galactic-esque piece, weaving in everything from fiberglass to LED lights in select pieces. This inspiring experience should not be missed. Opens Tuesday and on display through January 19, 2020, at Boca Raton Museum of Art, 501 Plaza Real, Boca Raton; 561-392-2500; bocamuseum.org. Adult admission costs $12.

A happy hour where you learn something? You can enjoy some wine, light bites and a little history on Tuesday during the Historic Stranahan House Museum’s History Happy Hour. This shindig carries a different theme each time and for this one, Broward County Schools’ Michelle Sammartino will discuss Ivy Stranahan’s civic and social activism. Topics will span the former Fort Lauderdale first lady's creation of the Fort Lauderdale Women’s Club to her advocating for African-American and Native American rights. 5:30 to 7:30 p.m. Tuesday at Historic Stranahan House Museum, 335 SE Sixth Ave., Fort Lauderdale; 954-524-4736; stranahanhouse.org. Tickets cost $15.

Tuesdays can be a drag. Meaning: It can be a drag in the best way ever with Drag Queen Bingo at Gulf Stream Brewing. This happening is hosted by the always-blunt Nicole Halliwell and is totally free to participate. In addition to laughs, if you get bingo, prepare to go home with a nice gift card or some free beers. 8 p.m. Tuesday at Gulf Stream Brewing, 1105 NE 13th St., Fort Lauderdale; 954-766-4842; gulfstreambeer.com. Admission is free.

It all comes down to this! More than 200 comedians have participated in 14 cities throughout the Sunshine State and now the Florida’s Funniest Comedian contest is down to its final ten folks. Who will win? Who is the funniest? Who may we see go on to comedy superstardom? You’ll have to find out Wednesday evening at The Improv in WPB. Regardless, get ready to laugh. 8 p.m. Wednesday at Improv Comedy Club West Palm Beach, 550 S. Rosemary Ave., Suite 250, West Palm Beach; 561-833-1812; palmbeachimprov.com. Tickets cost $20 via palmbeachimprov.com.