Photo courtesy of Daer
Grammy-winner and DJ extraordinaire Zedd rocks Daer South Florida for NYE.
A new year. A new decade. 2019 is finally over. And 2020 (which, let’s be honest, is just fun to say) is here.

However you want to spin it, you have a reason (if not ten) to party on New Year’s Eve. And, no, watching Ryan Seacrest in whatever special he is doing this year doesn’t count as partying.

In South Florida, your ocean of options include an oceanfront gala, concerts, nightclub debauchery, a casino charity night, and much more.

So, without further adieu, here are the best New Year’s Eve parties in South Florida for ringing in 2020.

If the thought of going to New York for NYE seems psychotic (reality check: it basically is) or watching Anderson Cooper in New York has gotten old, there’s a little New York flair hitting Pompano Beach on Tuesday evening. Beach House Pompano is set to host a swanky Etoile: A New Year’s Eve Red Carpet Gala, with showgirls, on the oceanfront, an experience that’s billed to mirror the Met Gala, with bottles poppin’ all night long. Tickets start at $150, including open bar and food stations (there will be crab legs) and the swankiness officially begins at 7 p.m. 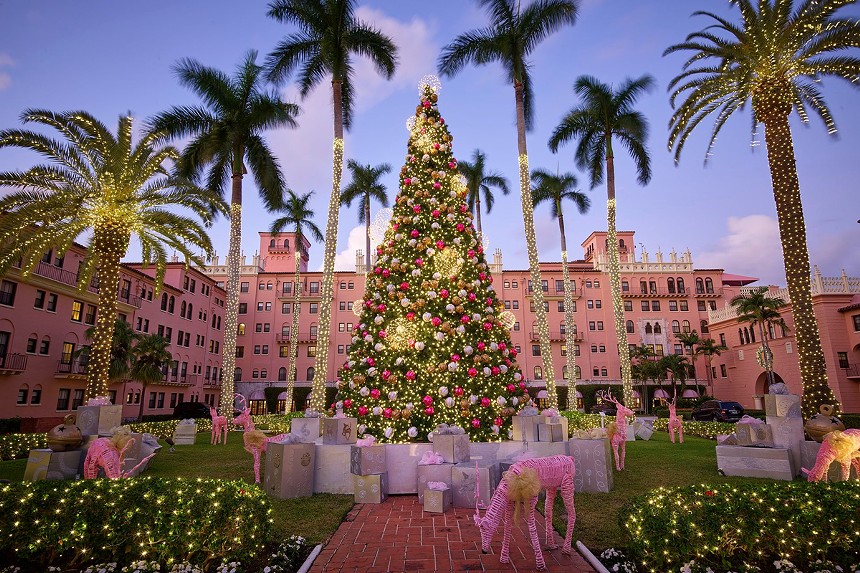 If a musical NYE is what you seek, the Boca Raton Resort & Club will be music to your ears and has curated quite the show. A trio of world-class groups will take its grand ballroom stage from 8 p.m. to 12:30 a.m. (tickets start at $395), including Max Weinberg Revue (the long-time drummer for Bruce Springsteen’s E Street Band), Five for Fighting, and Powerhouse Next Generation. In addition to the jams, there will be a private firework show and activities galore for kids, if they are allowed to stay up way past their bedtime.

Glitch Bar knows how to throw a killer street party to ring in a New Year. In addition to free video games galore, yummy cocktails (the Player No. 1 Old Fashioned with bourbon, chocolate bitters, a Luxardo cherry, and orange peel remains a fave) and good vibes within its confines, the spot rolls out a massive video screen in its parking lot and a big ole dance party ensues til the wee hours of the morning. Admission and parking are free, and your drink specials include $5 Ketel One and $7 Don Julio Blanco selections.

For a third consecutive year, a little bit of Havana is landing in WPB for New Year’s Eve. The Hilton Palm Beach Airport’s A Night in Havana, Cuba! celebration encourages guests to dress in Cuban garb (yes, you’ll need that fedora), enjoy free champagne all night long and nosh on bites from Chef Rachelle Daoud Lexima. DJ Debas and a TBA live band will provide the jams while hand-rolled cigars (made on site) and the most authentic of mojitos will be available for sale. Tickets are $100.

Your NYE doesn’t have to be a drag. It can be full of drag at the drag-ilicious dining joint Lips in Fort Lauderdale. To ring in the New Year, the spot will host two dinner seatings and tantalizing shows, one at 7 p.m. ($45, including a three-course meal and show) and the other at 9:30 p.m. ($75, including a three-course meal, show, party favors and midnight champagne toast). Space is limited in the intimate venue and reservations are required, so don’t delay.

There’s another 12 o’clock on New Year’s Eve that goes under-celebrated: Noon! In a unique take on New Year’s Eve that’s totally kid-friendly (and perhaps optimal for people who hate staying up and being among the drunk zombies so late), Palm Beach Zoo is hosting its eighth annual Noon Year’s Eve. Kicking off at 9 a.m. and running through 2 p.m., this one culminates at the lunch hour with a special ball drop and sparkling gummy bear toast. There will be a dance party at the zoo's Fountain Plaza as well. This event is included with your regular admission to the zoo ($24.95 for adults and $18.95 for children 3-12).

The smooth rockin’ South Florida group Mister Trombone & the Vam Bandwill play Rosemary Square on NYE starting at 7 p.m. and rolling through midnight. In addition to enjoying (purchased) grub and libations from one or more of the many great eateries and bars here, this will also be your last opportunity to take in one of Rosemary Square’s seasonal fake “snowfalls” until next winter.

Your time is ticking big-time for access to what will surely be one of South Florida’s most raucous parties. The Wharf Fort Lauderdale has already established itself as a place-to-be-seen in recent weeks and NYE will be another great opportunity to show out. A limited number of tickets remains (free to RSVP) for its Sea You in 2020 party, which promises to be overflowing with cocktails, live music, and bites (for purchase) from culinary mainstays Even Keel, Hou Mei, Lunchroom, the Piefather, and Mojo Donuts.

If you’re looking for a little gambling action and don’t want to feel awful about losing to start the new year, there’s a casino night for a cause on tap in Delray Beach. Tin Roof — known for its regular Boy Band Brunch — is ringing in the new decade with a Las Vegas-style casino affair with live-action games, karaoke, drinks, food, and more. Tickets start at $30 and all proceeds benefit the local nonprofit Delray Citizens for Delray Police.