Cap's Place, Once a Speakeasy and Gambling Den, a Portal to Old Florida 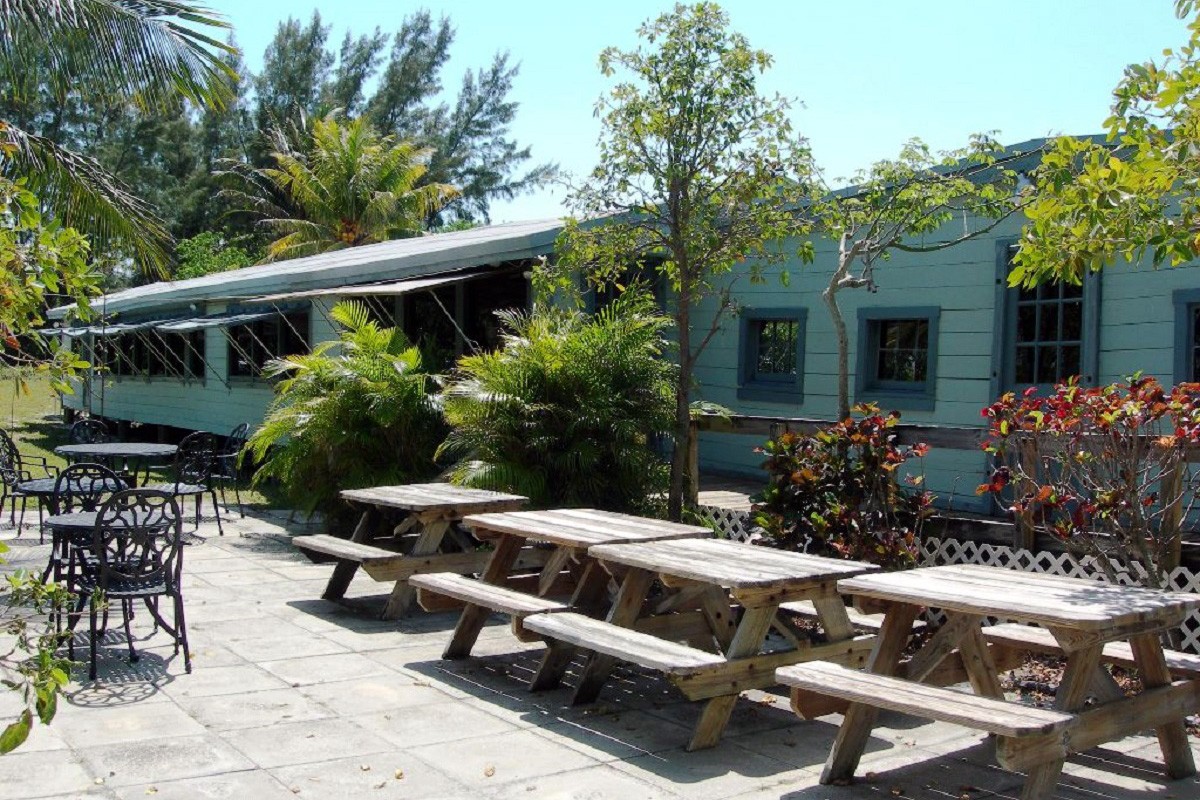 Image by Dtobias/Wikimedia Commons
The patio at Cap's Place on the Intracoastal Waterway.
With South Florida’s constant development, there are very few remnants of old Florida in this corner of the state. Yet, in Lighthouse Point, one spot survives — Cap’s Place, a classic Florida seafood restaurant, onetime speakeasy and gambling den, draped in Florida history. If you haven’t been there, you need to go, just to get a sense of what this area was like before the takeover by strip malls and asphalt.

Originally built in the 1920s, Cap’s Place is the oldest structure in Lighthouse Point and the oldest restaurant in Broward County. In 1990 it was nominated to the National Register of Historic Places. Author Carmen McGarry calls Cap's Place, "A landmark comparable to no other in South Florida, it has withstood Prohibition, mobsters, depression, wars, the ravages of nature, and many joyful and peaceful times for nearly a century.” 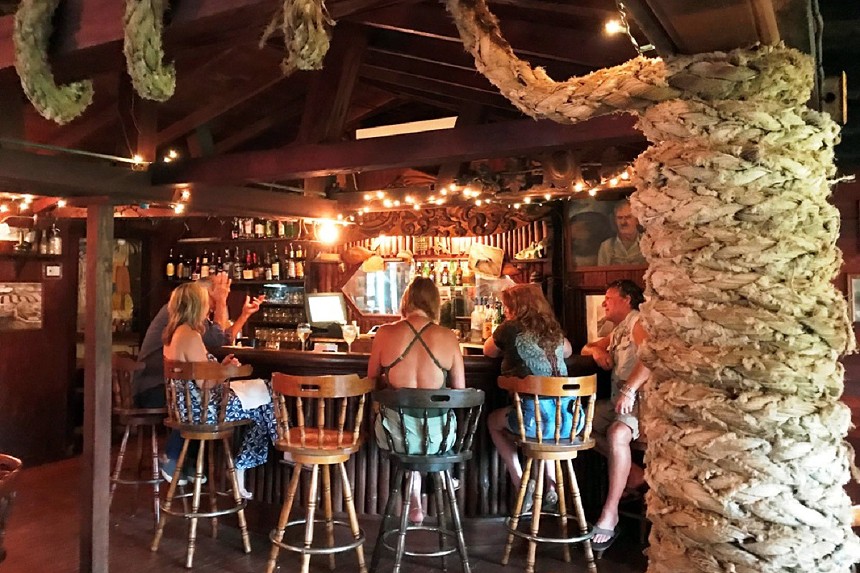 The Bar that Al Hasis built out of salvage is still a focal point.
Photo by William Flood
South Florida was barely settled in the '20s, with the exception of towns built along Flagler’s East Coast Railway. In that era, Eugene Theodore “Cap” Knight, his wife Lola, and lifelong friend Al Hasis fashioned an old barge and ragtag collection of wooden shacks into what would become a fabled speakeasy and restaurant near the Hillsboro Lighthouse.

Knight was born into a seafaring family in Cape Canaveral in 1871. His father, grandfather, and brother were all lighthouse keepers and it’s reputed Knight may have been born in the Canaveral Lighthouse. Knight left home at age 13 to join the merchant marine and spent more than three decades as a mariner. He started as a mess boy on a lighthouse tender, progressed to mate, and by 1919 became a Master on the Morgan Line Steamers plying New York to New Orleans.

In 1916, Knight married his second wife, Lola Saunders, a schoolteacher for the children of lighthouse employees and fishermen around Hillsboro Inlet. Cap soon settled near his brother, Tom, who was a Hillsboro lighthouse tender. About the same time, Knight befriended Pittsburgh émigré Albert Hasis, who like Knight, had left home at 13 to find his fortune. Cap and Al developed a friendship that would eventually blossom into a business partnership.

Post-war matchbook advertising Cap’s Place.
Image courtesy of Cap's Place
Right on the heels of Prohibition, the Great Miami Hurricane of 1926 brought an abrupt end to the “Roaring Twenties” in South Florida, plunging the area into an economic depression three years before the rest of the country. Enterprising types kept things going during those lean years with bootlegging and illegal gambling while rum-runners brought liquor up from the Bahamas, casually smuggling it into South Florida as local officials turned a blind eye. The Knights and Hasis were among the smugglers, making runs between Bimini and Hillsboro Inlet, using the lighthouse as a beacon on night runs. The clan also had business interests that were legal, including a fleet of commercial fishing boats, a wholesale fish market, and a fishing camp in the Everglades.

In 1928, Knight and Hasis began constructing what they would call Club Unique, starting with a beached dredging barge once owned by Flagler’s company. With hardscrabble effort, they built structures using available materials like local cypress, Dade County Pine, Everglade’s bamboo and even Cuban mahogany.

According to the National Register of Historic Places, “Fishnets served as curtains and parts of ships, rope, driftwood, and harpoons hung haphazardly from the ceilings.” The walls were lined with shark jaws and rattlesnake skins. Hasis built the distinctive bar using a bowsprit salvaged from a sunken wreck. The bar is topped with old ship decking. Hawser lines used on the original barge are wrapped around a large piling in the bar. 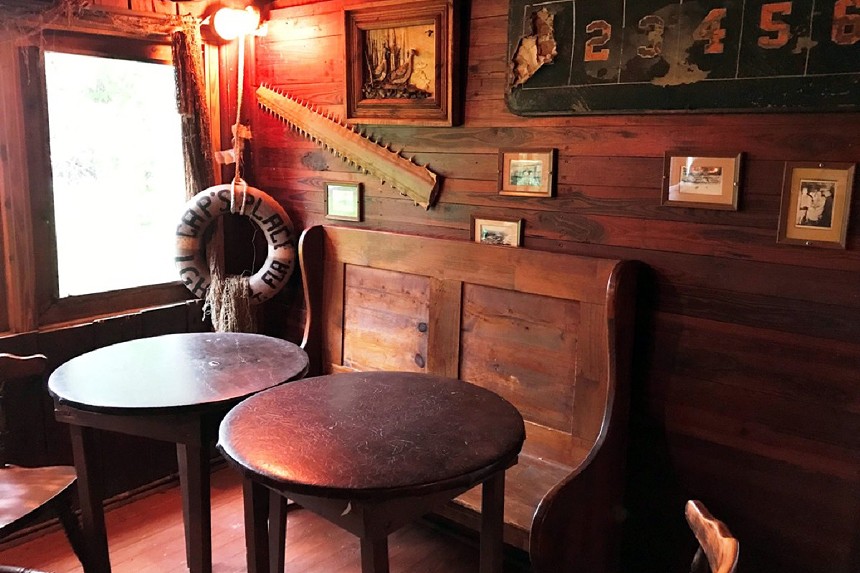 A window seat inside Cap's Place in Lighthouse Point.
Photo by William Flood
Five buildings make up the complex; four are considered historic — the restaurant, bar, fish house, and boathouse. The National Register notes, "When Cap's Place was originally constructed, the peninsula on which it is located was extremely narrow. The barge portion of the restaurant, as well as the fish house, extended out over the water. A series of docks and piers still connects the buildings."

While named Club Unique, it’s always been known locally as Cap’s Place, and from the outset was a hideaway with gambling, liquor, and dining. Slot machines lined the halls, a wheel of fortune hung in the bar, and games like blackjack and roulette were available. Private memberships to the supper club were sold for 25 cents. At the behest of gamblers in the 1930s, red carpet was laid in the main dining room, thereafter known as the Poinsettia Room. 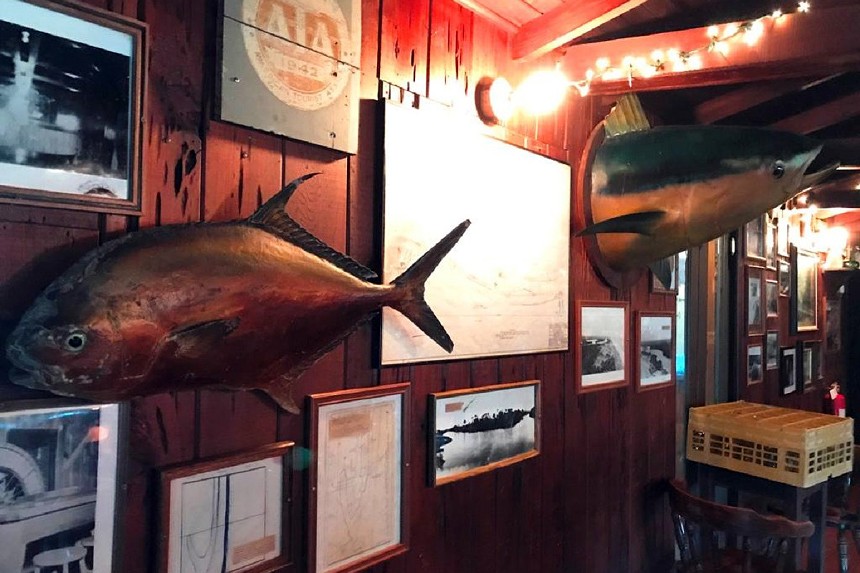 Over the years, Cap’s Place was visited by a notable cast of characters including Vanderbilts and Rockefellers; actors Errol Flynn and Humphrey Bogart; sports figures Jack Dempsey and Joe DiMaggio; and even mobster Al Capone. Oral history suggests Winston Churchill and Franklin Roosevelt may have dined there during a strategy meeting amid World War II.

Cap’s Place was almost lost in 1954 when a development group planned to bulldoze what they viewed as “jungle” to build the area’s first yacht club. Fortunately, the project never materialized and the parcel remained fairly unscathed. Cap died in 1964 at the age of 90. Lola, two sons, and Al Hasis continued to operate the restaurant after his death. Lola retired in the mid-1970s and passed away in 1989; the Hasis family as­sumed ownership of the restaurant and continues running it today. 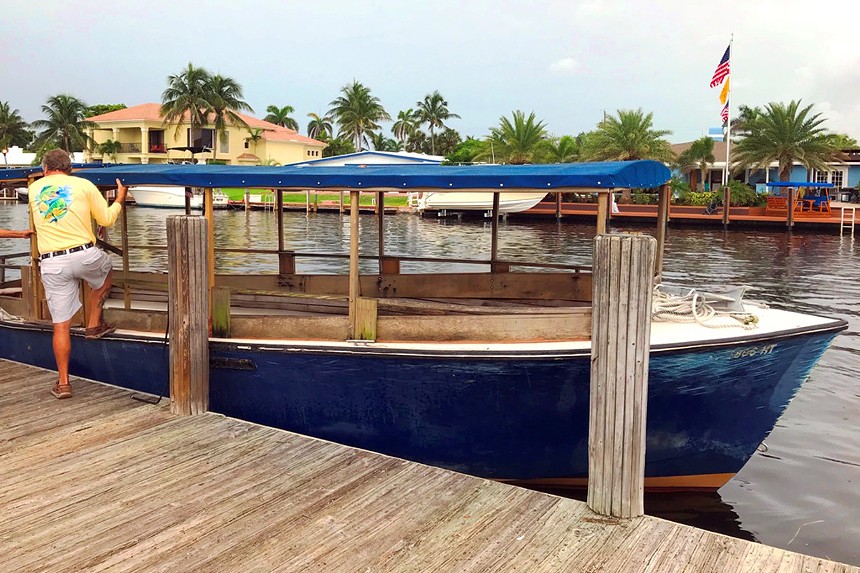 Getting to Cap's Place by motor launch is part of the charm.
Photo by William Flood
One of the greatest charms to Cap’s Place is getting there via their free motor launch. Board from Cap’s dock located next to the Lighthouse Point Yacht Basin and Marina and on the journey over, you'll be treated to a history of the area by the captain. When you step off, it’s into a setting of Florida pine and mangroves not much different than it would have appeared 70 years ago. You can feel the whispers of bygone days as you walk along the docks and uneven floorboards — or when you sit at the bar, built when most of South Florida was swampland.