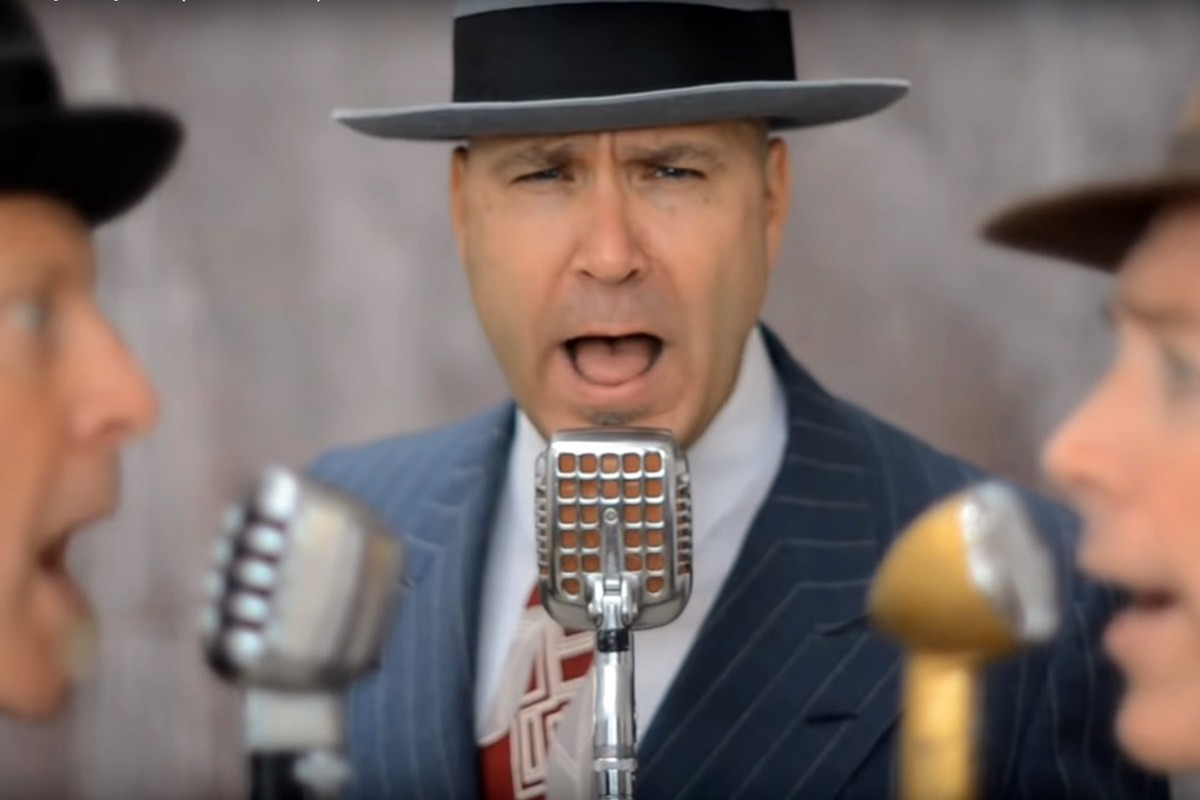 Image via Big Bad Voodoo Daddy/YouTube
Big Bad Voodoo Daddy swings into Parker Playhouse this Friday night.
It is party time! Mardi Gras is here and this weekend you are invited — no, expected — to go to at least one carnival season shindig.

If you're feeling the need for beads, New Times has scoped out a few events sure to offer plenty of fantastical fun.

Of course, there are more — and sometimes more fun — things to do than party. February is Black History Month, with 29 days this year full of interesting events and activities.

If you've ever been to Mardi Gras, on Bourbon Street, you know what a crazy — and pretty much adults-only — good time it can be. This weekend, that side of New Orleans comes to the Wharf Fort Lauderdale with the events venue's first Mardi Gras Riverfront Festival. The three-day party, running Friday through Sunday, will have Mardi Gras-style entertainment and musical performances — it wouldn't be Mardi Gras without brass bands — along with specialty New Orleans-inspired cocktails, contests and prizes, and more beads than you need. RSVP online, and you will receive complimentary Mardi Gras swag at check-in. Noon to 3 a.m. on Friday, February 21, and Saturday, February 22; noon to midnight on Sunday, February 23, at the Wharf Fort Lauderdale, 20 W. Las Olas Blvd., Fort Lauderdale; whartftl.com. Admission is free.

Jimmie Walker and Michael Winslow bring their comedy stylings to Pompano Beach this weekend.
Courtesy of Pompano Beach Cultural Center
Pompano Stand-Up Live on Friday night will feature comedians Jimmie “JJ” Walker and Michael Winslow. Walker, who gained fame on the 1970s hit show Good Times, and Winslow, who starred in the Police Academy franchise, team up to reprise their comedy special “We Are Still Here."

Walker burst into America's living rooms playing JJ on Norman Lear's iconic black-focused sit-com that debuted in 1974, and is often remembered using his signature catchphrase "Dyn-o-mite!" Walker has been outspoken — some would say out there — in recent years, criticizing former President Barack Obama, dating right-wing blond bomb-thrower Ann Coulter, and for his vocal support of Donald Trump. Walker still tours nationwide. He became such a major celebrity in the 1970s that Time named him Comedian of the Decade. Winslow is an actor, beatboxer, and comedian known for his ability to make realistic sounds using only his voice. He is best known for his role as Larvell Jones in all seven Police Academy films. If you haven't attended a Pompano Stand-Up Live show before, just know there's a two-drink minimum. 8 p.m. Friday, February 21, at Pompano Beach Culture Center, 50 W. Atlantic Blvd.; pompanobeacharts.org. Tickets are $40 via tickets.ccpompano.org.

As the comedians' appearance coincides with Black History Month, Walker will also hold a "Live on the Set" session from 6 to 8 p.m. Thursday at Pompano Beach Cultural Center. Tickets are $10 via eventbrite.com.


It don't mean a thing if it ain't got that swing. One thing Big Bad Voodoo Daddy has is plenty of swing. Formed in 1989 in Southern California as a two-man lounge act, the now 12 or so member band brings its swing and jazz revival show to Parker Playhouse on Friday. Their catchy, often bluesy tunes include "Save My Soul" and fast-paced swing hits like “Why Me?” “Mr. Pinstripe Suit” will get you on your feet even if you don't know a thing about swing. One of my favs is Daddy's cover of Cab Calloway's “Minnie the Moocher.” They have played venues ranging from the Hollywood Bowl to Lincoln Center and have appeared with symphony orchestras, in a Super Bowl Halftime Show, and Dancing with the Stars. If you dig that crazy music, then this is the show for you. Heck, don't take my word, just go daddy, go. 8 p.m. Friday, February 21, Parker Playhouse, 707 NE Eighth St., Fort Lauderdale; parkerplayhouse.com. Tickets cost $26 to $56 via ticketmaster.com.

"Hued Songs" is among the featured events that are part of the Norton's celebration of Black History Month.
Courtesy Norton Museum
"Celebrating Black Florida" at the Norton Museum in West Palm Beach showcases the art and cultural histories of black Floridians through the Norton’s growing collection of works by artists of African descent.

The West Palm Beach showcase museum will have a range of interesting performances, talks, and activities on Saturday's Community Day — so many that some are scheduled as pop-ups and stop-bys. Special tours are part of the plan, along with workshops, artist talks, performances, a documentary film screening, and a teen art studio. “Mr. Trombone” — Wayne Perry — will serve as opening Master of Ceremonies.

Among the highlights of the day-long event is a retrospective of the Sunset Lounge, often called the Cotton Club of the South. The historic jazz venue in northwest West Palm Beach counted among its habitués some of America's greatest performers, including Count Basie, Cab Calloway, Ella Fitzgerald, and Duke Ellington. The Norton will feature images and music from the era.

The fun and vibrant Sunshine Junkanoo Band will perform, and you can also join a conversation with R.L. Lewis, a Florida Highwayman and art teacher in Brevard County. He will create one of his signature paintings while discussing his art, life, and the story of the Florida Highwayman. There will be a "Hued Songs" performance that illuminates the works of black composers and works inspired by black history, culture, or text. This work highlights musical and theatrical work by African-American artists and explores black history through dance, song, and spoken word. The museum restaurant also gets in on the action by offering island favorites like jerk chicken over dirty rice, Caribbean slaw, Jamaican beef patties, and coconut jerk shrimp and grits. Noon to 5 p.m. Saturday, February 22, Norton Museum, 1450 S. Dixie Hwy., West Palm Beach; norton.org. Admission is free.

There is no place like home and nothing better than your own backyard. So come on over to America's Backyard where Damn Good Hospitality presents the fourth annual Fort Mardi Gras Festival on Saturday.  There will be authentic New Orleans food, drinks, live music by Big Chief Band and the Rock N’ Jake Band. You can also look forward to seeing street performers, which include stilt walkers, jugglers and fire dancers. Then have your face painted, and check out the Indy crafts. Grown-ups, stick around and, at 10 p.m., join the Y100 After Party. 4 p.m. Saturday, February 22, America's Backyard, 100 SW Third Ave., Fort Lauderdale; fortmardigras.com. Admission is free.