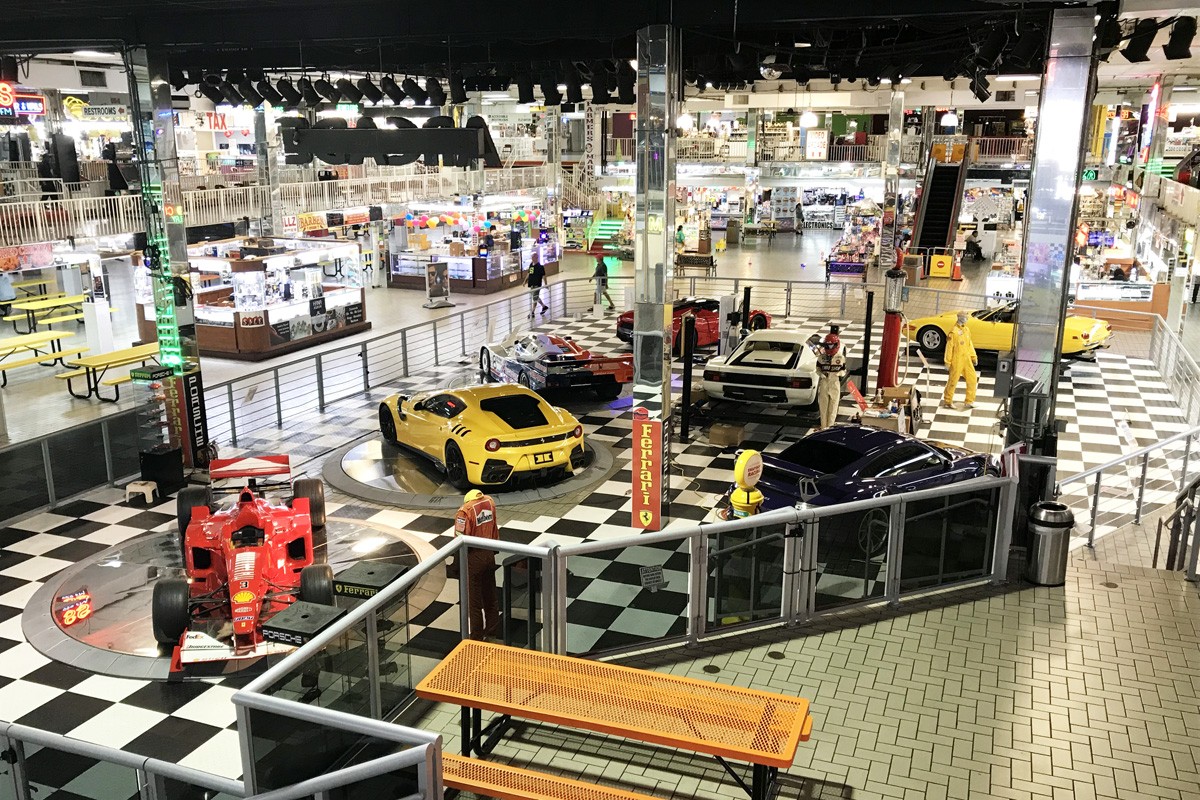 Photo by William Flood
Cars worth hundreds of millions of dollars are on display inside the sprawling and quirky Swap Shop on West Sunrise Boulevard.
At night, it’s a 14-screen drive-in movie theater. By day, it’s an immense indoor/outdoor flea market complete with a farmers market, entertainment, and — strangely — a stable of exotic cars. It’s Fort Lauderdale’s Swap Shop located just west of I-95 at exit 29.

The place is huge — 88 acres. It’s anchored by a 180,000-square-foot building housing everything from shops to an international food court. There are arcade rides and games and just enough vintage midway machines to keep the 40-plus crowd amused. In total, the complex is home to more than 2,000 vendors, and when the projectors aren’t running, it’s a sea of flea marketers, antique dealers, and one of the best farmers’ markets in town.

Inside that air-conditioned building is a rather undiscovered treasure; many shoppers hardly give it a second look — that’s a mistake. Swap Shop’s car museum holds one of the most significant collections of exotic cars you’ll likely ever see — it’s even acknowledged by the DuPont Registry. And, while most supercar owners keep their vehicles safely locked away in climate-controlled garages, Swap Shop puts millions of dollars of the world’s fastest machinery on display for their visitors to enjoy — at no charge. 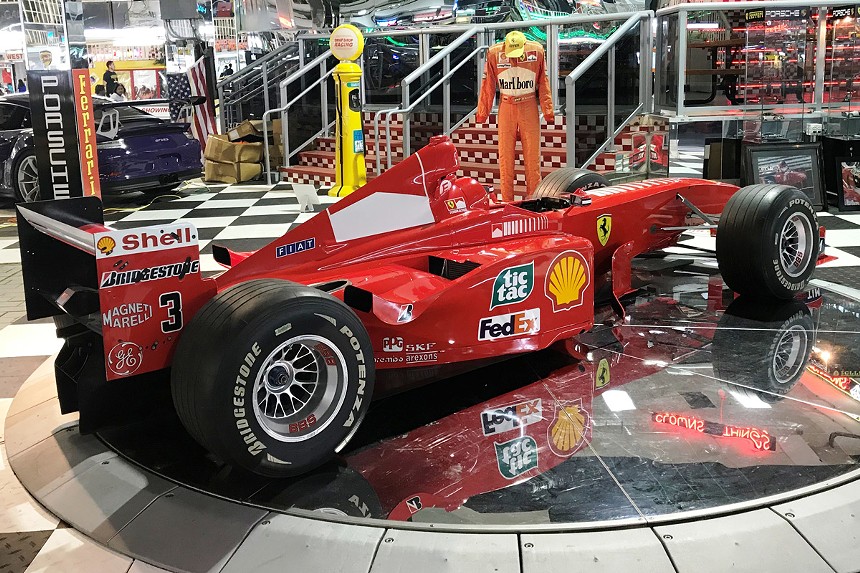 Michael Schumacher's Scuderia Ferrari Marlboro F2001, valued at more than $7.5 million, is among the highlights of Swap Shop's car museum.
Photo by William Flood
Ferraris are a big part of the collection, one of which is the famous 1986 white Testarossa Sonny Crockett drove in Miami Vice. There’s a Ferrari 275 GTB/C, built in the 1960s, that raced at LeMans, valued at $15 million. Another notable highlight: a Ferrari FXX, one of only 29 produced and rarely seen outside of Ferrari’s factory in Italy. Sitting nearby, there’s a sleek 365 Daytona Spyder (one of only 122 in the world) and 512 Berlinetta Boxer Spyder convertible, similar to the one owned by Eric Clapton.

Other European jewels on display include a Porsche 959 from 1986, the fastest street-legal sports car of its day. There’s also a lightning-like Porsche Carrera GT that can go from 0 to 60 mph in 3.6 seconds. Two European hypercars, with price tags north of seven figures, include an ultra-rare Maserati MC12 and a Mercedes-Benz McLaren SLR. 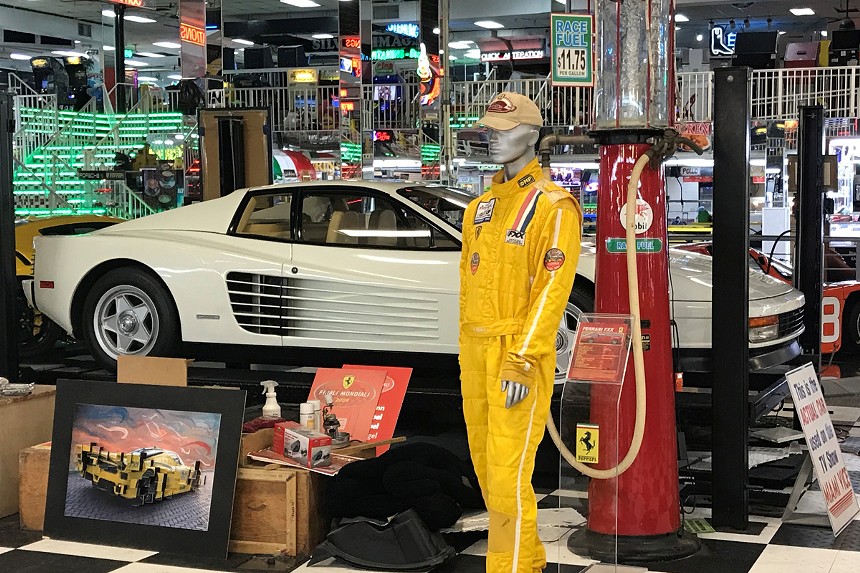 Among the hidden gems at the Swap Shop's car museum is the Ferrari Testarossa from Miami Vice.
Photo by William Flood
From the American side of the pond, there’s a Ford GT40. That’s the car chronicled in the 2019 Matt Damon film Ford v Ferrari, about a team from Ford besting Enzo Ferrari's long-dominant race team at LeMans in the 1960s. From across the Pacific, there’s a screaming 545-horsepower Nissan GT-R, nicknamed “Godzilla,” that wasn’t even allowed in the U.S. until 2007.

After enjoying the cars, take time to browse the rows of racing trophies and automobile memorabilia. Be sure to have your camera handy for all of it. 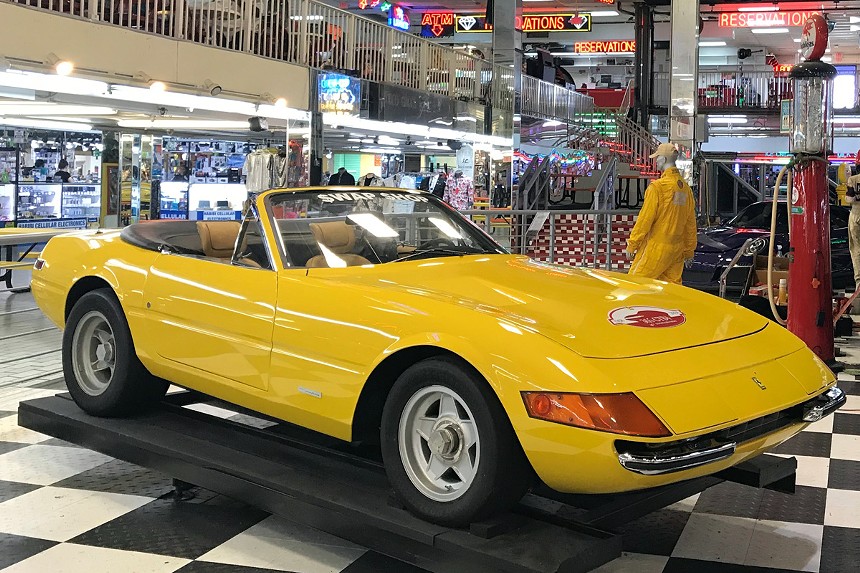 Preston Henn's Ferrari 365 GTS Daytona Spyder is one of only 122 ever made.
Photo by William Flood
How did this impressive collection of some of the world’s rarest and most exotic supercars end up at a flea market in central Broward County? The short answer is, Swap Shop has been successful enough to foot the bill. Preston Henn, the colorful founder and successful entrepreneur, turned a simple drive-in theater into a thriving tourist mecca that's lasted for more than 54 years.

Henn and his wife, Betty, started the business in 1963 as a one-screen theater originally called the Thunderbird Drive-In. In 1966, Henn decided to add a flea market and then continued adding attractions. A circus was added in 1989, which ran until 2005. Celebrities like K.C. and the Sunshine Band and Willie Nelson provided entertainment. While the circus is gone, live entertainment is still offered. 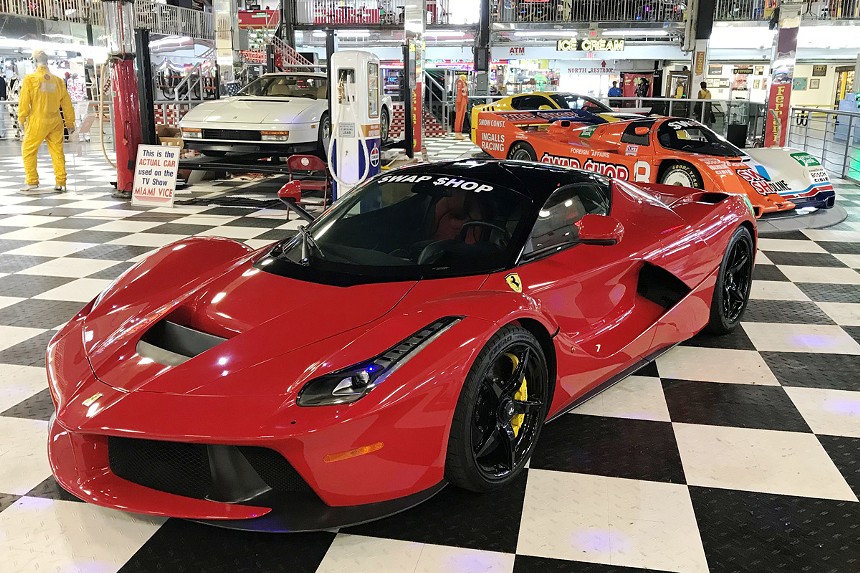 This Ferrari 512BB, a Spyder-style hybrid. can reach speeds over 215 mph.
Photo by William Flood
Today’s Swap Shop is rooted by the massive multi-screen drive-in theater — the largest in the world and just as popular as it was decades ago. But the real magic happens during the day, particularly on Thursdays and weekends, when hundreds of vendors from across the country take over the huge parking lot. It’s the thrill of the hunt, trolling through everything from typical flea-market merchandise to antique furniture, vintage goods, collectibles, and artwork.

Then, there’s that impressive farmers market that has everything from locally sourced goods to more exotic items not seen on Publix shelves. Produce from Latin America and the Caribbean dominate — like the football-sized mangoes and avocados from Haiti and the Bahamas.

So, if you find yourself in the vicinity Sunrise Boulevard, Swap Shop is definitely a “must-do.” Go for the antiques and the fresh produce — but, most certainly, go for the cars. You’re not likely to see many of these impressive vehicles elsewhere.