Photo courtesy of Zach Schwartz
A pair of seahorse skeletal articulations from Inner Workings Art
Five years ago, Zach Schwartz saw one hell of a fish. He came across it while surfing the internet, not the ocean. Regardless, it was unlike anything he'd ever seen. It was the skeleton of a swordfish, stripped clean of all flesh, and suspended from wires like a Halloween decoration.

"I was deep down one of those internet rabbit holes," Schwartz says of the swordfish encounter.

And he was hooked. He started small: with heads.

"I ran over to the local fish market, and fishermen would hook me up with heads. I used to get all the stuff from them," he says.


When friends who fished saw what he was tinkering with, they'd ask Schwartz to wire together their catch for posterity. "They'd call me as they were heading in, tell me what they caught, what they wanted," he says.

A 2014 graduate of the College of Charleston with a bachelor's degree in marine biology, Schwartz knew his way around a fish. But skeletal reconstructions were another matter. So he began combing through volumes of old scientific journals and trolling online forums devoted to taxidermy and osteology (the study of bones).

"There's old literature on that. It's just, unfortunately, dated," Schwartz explains. "I'll look through old scientific journals to see if there are published descriptions of the species when they were first described and see if they have the osteology of it out there."

After two years practicing, Schwartz began taking on commissions. Now he operates Inner Workings Art, a Miami-based company that specializes in creating skeletal articulations just like the swordfish from half a decade ago. The company conducts most of its business through commissions — fishermen bring specimens to Schwartz, who crafts a lasting memento of a weekend at sea. 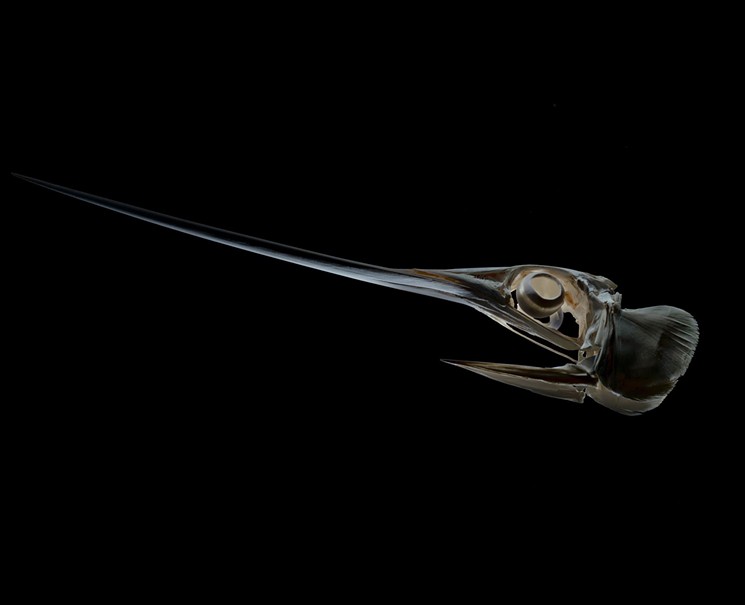 Swordfish
Photo courtesy of Zach Schwartz
The creations are fascinating to behold — so fascinating that people occasionally grill Schwartz, seeking step-by-step instructions behind his wiring technique. He's reticent about revealing too many details, though he says the information is readily available online. You just have to be willing to the homework.

"A lot of it was trial and error and a couple of years of me seeing what works best," he says. "I know the way people are nowadays. They want the quick-and-dirty 'how do you do this?'"

The process It might start out dirty, but it is by no means quick. From the time a fish is reeled in, an articulation, as Schwartz calls it, requires four to eight months before it's worthy of displaying on a client's mantel.

The first step alone is likely a dealbreaker for anyone who shares living quarters with a neat freak: maceration, i.e., the breakdown of flesh through decomposition.

"I stick the head into a bucket of water, leave it out in the South Florida sun for about two weeks," Schwartz says. "I have the bacteria break down everything, and I'm left with flesh-free bones on the bottom."

Then he has to remove the grease from each and every bone. Degreasing is crucial for long-term preservation and requires that the bones be left to soak in various chemicals.

"Fish are really, really greasy. If you don't degrease them, over time they will turn yellow, they'll smell," Schwartz explains. "They spend quite a few months in degrease, and, from there they're whitened and assembled."

Piecing a specimen back together is a process complicated by the unique bone structure of a fish. Whereas some species have bones that fit together perfectly, fish are held together by a lot connective tissue, which is eliminated during maceration. And there are a lot of bones in a fish. If the human skeletal system could be memorized through a song, a fish would require an entire symphony. Bluefin tuna tail
Photo courtesy of Zach Schwartz
At first, Schwartz found himself sorting through a pile of bones that all looked pretty much alike. He describes the process as a "nightmare of a puzzle," made even more painstaking to solve because degreasing tends to warp some pieces.

"Luckily, I've been able to find some osteological diagrams," Schwartz says. "That was helpful in the beginning, but it's gotten to the point now where I pretty much know where they all go."

The intricate work has given Schwartz a deeper appreciation for aquatic life. He's particularly intrigued by the insight his articulations give into the creatures' unique morphology.

"When you've got a mahi, which is a fast fish swimming in open water, and you compare that with something like a grouper, which lays on the floor all day," Schwartz begins, obviously stoked about comparing the two fish. "You could see the bone structure is completely different, where like the mahi has got really thin, light bones and it's built for speed, as opposed to the grouper, where it's built kind of like a tank with really big, thick, heavy bones that actually hold a lot of grease on them."

As captivating as the skeletal articulations can be, commissions to create such works of art are few and far between. But Schwartz refuses to be deterred.

"This is an old practice that's kind of gone by the wayside," he says. "There are a fair amount of people who do it. There's just not a lot who work with fish, because they're such a pain."