Photo by Amanda Barona/Marcelo Cantu/ShotByXeno
Rick Ross, City Girls, and Kodak Black
Rolling Loud was born and raised in the county of Dade, so, naturally, the festival's lineup is going to feature artists from the crib.

Since its inaugural show in 2015, South Florida artists have always been included, no matter how mainstream or independent they are. Over the years, New Times has witnessed some unforgettable sets from some of South Florida's most revered artists. Trick Daddy and Trina made their debut at Rolling Loud 2018 with 99 Jamz's DJ Nasty 305 backing them up. The following year, Ice Billion Berg held it down for Miami on the Monster Energy stage.

And those are just the previous legends who have taken the stage.

Over the years, underground artists like Prez P, IndigoChildRick, Smokepurrp, and other well-known acts have infiltrated every stage within Rolling Loud's extensive compound. Local artists like Pouya, Fat Nick, Robb Bank$, Members Only, and Wisifuneral have not only performed at the in-person festival but also the Loud Stream shows on Twitch that popped up during the pandemic.


Twenty-twenty-one will have plenty of artists not just from South Florida but from across the entire Sunshine State. Tallahassee's own T-Pain will have his own set, as will other Florida natives like SpottemGottem, Rod Wave, Danny Towers, Hotboii, Bobby Fishscale, and West Palm Beach resident $not, just to name a few. In total, 29 artists who hail from various counties throughout the state will hit the stage at Rolling Loud.

Here are ten artists from South Florida that you should look out for during Rolling Loud weekend, July 23-25.

Yung Miami and JT of City Girls
Photo by FlicksByEdd

You can’t escape the City Girls these days. Yung Miami and JT have the nation on lock with their raw and uncut lyricism over twerktastic beats. During the pandemic, fans were blessed with notable bops from the duo’s City on Lock album, which features Lil Baby, Doja Cat, Lil Durk, and Yo Gotti. The Miami natives kept their foot on the gas with remixes to their single “Pussy Talk” and BRS Kash’s “Throat Baby.” The Quality Control signees waited for the perfect time to strike in 2021 with their '80s-inspired jam “Twerkulator,” which will likely echo throughout the Sunshine State all summer long. While the duo has been popping up at clubs and events around the nation these past few months, it’s been a while since City Girls have appeared on the Rolling Loud stage. Prepare to watch Caresha and Jatavia bring hits like “Twerk,” “Act Up,” and  “Where the Bag At” to their hometown — period.

FCG Heem is the latest artist from the crib to break into the rap game. Hailing from Fort Lauderdale, Heem has been relentless for the past few years, dropping music like his debut project, Letter to My People. While some artists went radio silent, Heem took advantage of his time off during the pandemic and flourished. Soon after dropping his pandemic-inspired EP, Street Virus, he began working on his major-label debut, Neighborhood Poetry. The 14-track LP, which dropped in May via Republic Records, features standout tracks like “Believe in Me” and “Peace & Positivity.” It also holds fresh collaborations with NoCap, Pooh Shiesty, and Toosii. Fans will definitely want to see Heem perform his latest bangers live during his Rolling Loud debut.

F$O Dinero’s upcoming set at Rolling Loud is a win for his whole team. After signing to Slip-N-Slide in 2018, the Oakland Park native hit the ground running, dropping solo music and dope collaborations with some of the biggest artists in the game. On his 2019 project, Color Money, Dinero connected with Zoey Dollaz, City Girls, and OTF’s Lil Durk — all of whom will be at the festival. Throughout the pandemic and for the first half of 2021, the 22-year-old rapper released a handful of bangers, from “Lost Sauce” featuring F$O Sauce to his most recent single, “Vye Neg,” which dropped a few days before Haitian Flag Day. The FSO (short for “Fly Shit Only”) crew will be on the scene, but there’s no telling what surprises Dinero has in store for the fans. 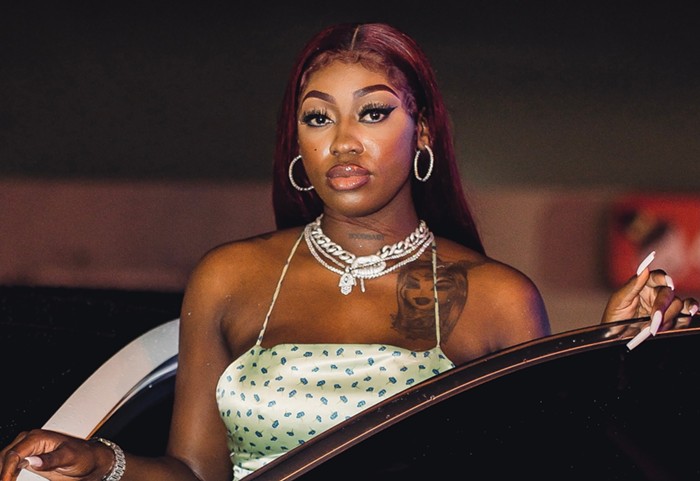 It’s Hood Brat’s time to shine. The Overtown native has been enticing fans since before she was cast to appear in VH1’s Love & Hip-Hop: Miami. When the cameras aren't following her, the 30-year-old rapper is in the studio cranking out songs like her latest single, “Pam.” The pandemic may have blocked her and the rest of the lineup from performing at Rolling Loud last year, but it couldn’t stop her from doing what she loves. Hood Brat delivered her 14-track project, Hood Baby, featuring Brisco and Vicky Vee at the height of the lockdown. Although she’s been performing at events everywhere, Hood Brat is finally ready to hit the stage and deliver her wide range of new tracks and others from her Vonda days.

In recent years, a mob of talented artists has emerged from the edge of County Line Road in Miramar to North Lauderdale, including Jackboy. The Pompano Beach native has delivered plenty of alluring records over the past year alone. In 2020, he released three projects, including a self-titled album and two follow-ups, Living In History and Love Me While I’m Here. The Sniper Gang rapper recently collaborated with the likes of WizDaWizard and Russ before dropping his most recent single, “Protecting My Energy.” With Rolling Loud quickly approaching, Jackboy is more than prepared to put on an unforgettable set featuring all of his new music for his fans who’ve waited so long to see him.

The last time Kodak Black was set to perform at Rolling Loud, the young rapper was whisked away by the Miami Police Department in handcuffs. Now that he’s served his time behind bars and obtained his pardon from former President Donald Trump, Kodak is ready to dominate the stage once again. Since his release, the Pompano Beach native has released a handful of projects, including Bill Israel, Haitian Boy Kodak, and his most recent EP, Happy Birthday Kodak. With those works plus collaborations with NLE Choppa, Mike Smiff, and Pooh Shiesty, Kodak’s got plenty of fresh material that has yet to be performed on a global stage. Rap fans will be more than hype to finally catch Kodak perform all of his new songs and the classics that propelled him to stardom.

It’s a celebration whenever the bawse pulls up to the scene. Rick Ross is always ready to set any stage ablaze with his presence, and Rolling Loud won’t be any different. The Carol City Cartel cofounder is guaranteed to play his array of hits, from as far back as his breakthrough single “Hustlin’” all the way up to his latest collaborations with DJ Khaled (“This Is My Year”) and Guapdad 4000 (“How Many [Remix]”). And don't be surprised if Rozay drops a new song during his set. His long-awaited album, Richer Than I've Ever Been, is expected to arrive sometime soon. Clearly, he has the opportunity to preview some new music. Since he’ll be performing in his hometown, it’s possible he might bring out a famous friend or two.

It’s been two and a half years since we received a fresh, full work from Broward native Ski Mask the Slump God. Since dropping his major-label debut, Stokely, in 2018, the rapper has kept busy, releasing his 2019 single “Carbonated Water” and jumping on his friend DJ Scheme’s Family album in 2020. Earlier this year, Ski Mask delivered two EPs, each featuring five songs, which were meant to appear on his first studio album, including collaborations with Lil Baby, Lil Yachty, and the late Juice Wrld. At Rolling Loud, the Slump God is also likely to perform fresh joints off his new project, Sin City the Mixtape. Fans can expect an exhilarating performance with a mix of new and classic records from his Very Rare/Members Only days.

Tafia has had a hell of a year, and it's only July. The Dream Chasers signee has spent the first half of 2021 enticing his fanbase with tough freestyles and fresh music from his latest project, Street Clarity, hosted by DJ Drama. The Haitian rapper has been scheduled to hit the stage at the biggest hip-hop festival in the land since last year before the pandemic hit. After everything he’s been through, from his shocking car accident to finally dropping new music, his set at the festival will be the cherry on top of a successful stretch. You won’t want to miss out on his set and the surprises he’s got in store. He can serve up a whole range of records, from his recent Fanci No. 9 mixtape with Major Nine all the way back to his early project Gorilla Drippin.

There’s no stage where Zoey Dollaz can’t dominate. The Haitian spitta is a Rolling Loud veteran with a lengthy catalog of fan favorites that will incite any crowd to go wild. Prior to the pandemic, Zoey delivered Last Year Being Humble, a nine-track EP featuring Future, Gunna, Nav, and Ink. After he dropped his project via Freebandz in 2019, Zoey collaborated with the likes of SoFlo’s own F$O Dinero and Dallas rapper 10k.Caash, while focusing on his new business venture, Aegis, a bulletproof car service. Earlier this year, Zoey dropped his latest single, “Broad Day Light,” via Littville, and he probably can’t wait to perform it live at the festival.