Drink Champs Reigns as the Top Music Podcast in the Game 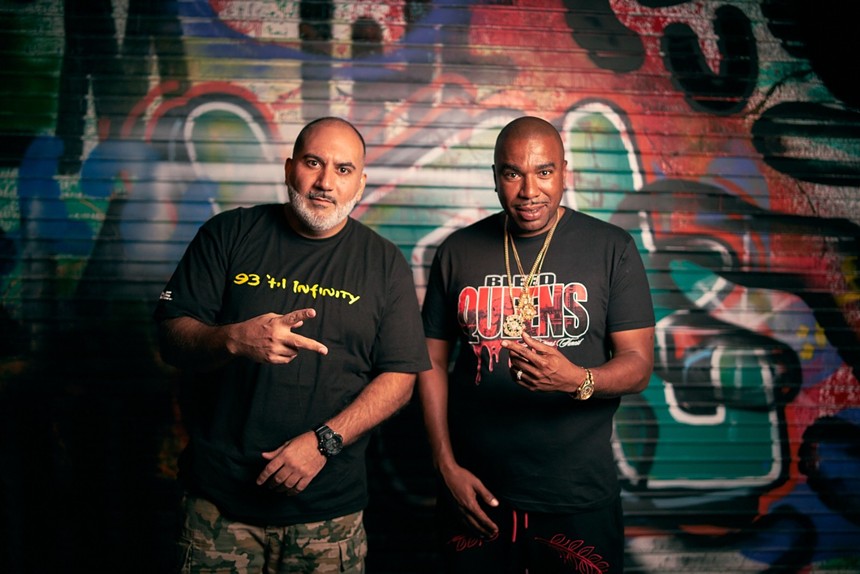 Drink Champs hosts DJ EFN (left) and N.O.R.E.
Photo by Drainflix
N.O.R.E. and DJ EFN's Drink Champs podcast has become a hub for hip-hop legends. Revered rappers like Miami's own Trick Daddy, Trina, and others have pulled up to the table, told rare stories about their careers, and made some noise with a shot or another drink in their hand. Trick's third appearance on the show, which aired last month, was bound to go viral like most of its episodes.

However, the internet wasn't focused on his thoughts on Verzuz or the DaBaby debacle. The trolls were more focused on another subject: Trick’s “Eat a Booty Gang” philosophy.

"In Miami, Trick Daddy is revered as the homie and the king to me," N.O.R.E. tells New Times. "He comes on the show and for him to be Trick Daddy and for me to notice that we said the same exact thing the first time we had him on an episode about Eat a Booty Gang. That's one of the moments. That's my favorite moment recently. Then right after having Grandmaster Caz on the show is just showing people."

Grandmaster Caz of the Cold Crush Brothers is a pioneer in the game in every sense of the role. His three-hour episode highlights the accolades of his career, like his appearance in hip-hop's first feature film, Wild Style, and his thoughts on Jay-Z's reference to Cold Crush in his 2001 song "Izzo (H.O.V.A.)"


Trick and Grandmaster Caz aren't the only legends featured on the show. Pharrell, Cam'ron, Nas, and others have pulled up to talk about the highlights of their careers. These are the kinds of rare moments the show has become known for.
"To me, it's important that we bring in some of these pioneers and architects of the culture because the history of the culture is kind of lost on the youth," DJ EFN says. "They love this thing called hip-hop, but they don't even know what it is or where it comes from. To have these people even school us about the origins and the beginnings of hip-hop, it's so enlightening, and it inspires us again."

N.O.R.E. (AKA Victor Santiago) and DJ EFN (AKA Eric F. Narciandi) have become skilled purveyors of the most unforgettable moments not just in hip-hop but also in the podcast industry itself. Upon celebrating its fifth year back in March, Drink Champs has ascended to the top of urban programming. As of this summer, the Miami-based show is the number-one music podcast, with well over 350,479 unique monthly listeners, according to PodTrac. Hosted on the Black Effect iHeartMedia network, Drink Champs also has a digital reach skyrocketing into the millions across YouTube, Revolt TV, and podcast streaming services.

The podcast's new accomplishment is a career high for EFN and N.O.R.E., who has been putting all of his focus into the show over rapping and his other seven jobs. For the most part, the Capone-N-Noreaga rhymer has been dodging the mic lately. He recently made a few exceptions for his family and for a lucky audience out in Connecticut last month. However, during Fat Joe's birthday in New York City in August, rapper-turned-Podfather hesitated to perform.

"I didn't want to do that at all," N.O.R.E. recalls. "Fat Joe forced me. First of all, I don't like the cameras. That's why during my anniversary I really asked people to go light with the cameras. And I don't want to perform right now."

Since he's not performing, N.O.R.E. also isn't 100 percent focused on music at the moment.

"I wouldn't disrespect my legacy, and I wouldn't disrespect hip-hop knowing that I'm having a lot more fun being a freelancer," he explains. "I'm actually enjoying that. It's a little bit easier for me to talk than to sit down and write rhymes and pick beats all day. When I free up and I do want to, I'll do it because right now I don't 100 percent want to do it."

Noreaga can afford to put his long-standing music career in the backseat while he works to push Drink Champs forward and take on Love & Hip-Hop: Miami. The Queens native, who's lived in the 305 for the past 17 years, recently made his debut on the new season of VH1's reality series along with his wife, Neri.

"So lack of a better term, I'm a newcomer," N.O.R.E. says. "Ray J and Trick Daddy actually schooled me. They schooled me on how to get the scene done and 'hurry up.' They've definitely been helping me with that."
While N.O.R.E.'s reality-TV career reignites, DJ EFN's film ventures are also ascending to new heights. After helping spawn a slew of other podcasts under the Drink Champs umbrella, the Cuban-American podcaster has found a new home for his rap-inspired docu-series Coming Home. Since premiering the inaugural episode, Coming Home: Cuba, in 2013 on Revolt TV, EFN and his Crazy Hood crew have traveled around the world to discover hip-hop in foreign countries like Vietnam, Haiti, and Peru. Now, the next installments, Coming Home: Colombia and Coming Home: South Africa, are set to debut on LL Cool J's Rock the Bells network.

"It's surreal," EFN says. "Dog, think about it: I'm a kid from Kendall, Miami, Florida, who just loves hip-hop and said, 'Fuck it. I'm going to try to do some hip-hop shit with my homies from school.' And fast-forward, and I'm doing Zoom meetings with LL, and he's saying he loves the stuff I'm doing. Let's rock 'n' roll. It doesn't get any better than that."

EFN's ventures in film and the marijuana industry, thanks to his new deal with TransCanna, combined with Noreaga's rebrand into a famed media personality and TV star are only helping to strengthen the Drink Champs brand. As if that’s not enough, both hosts also have a few ideas for making a bigger impact on hip-hop around the world.

"I think it would be dope if we can bring what we're doing as like a franchise to these different countries so they can do it themselves," EFN says. "The other idea is a Drink Champs documentary and on top of that, a scripted film, like a comedy we want to do based off Drink Champs."

N.O.R.E. and DJ EFN's goal to document hip-hop with one alcohol-induced episode is a testament to their dedication to the game. With the price understandably going up for the Drink Champs crew, there's one thing that will never change while they're at the top spot: their loyalty to Miami-Dade County.

"Miami has been so good to me and held me down," N.O.R.E. says. "I'm born and raised in New York City, I'm never going to get rid of my accent and will never stop repping New York, but I officially adopted a second city and they've adopted me especially when you got Trick Daddy saying I'm even a Miami guy at this point. So I felt honored like I'm an honorary Miami member and it feels good."