Courtesy Anna Sussman
Mike Griffith is a pilot's pilot. Not only did the Los Angeles dweller fly 85 missions during the first Gulf War, but he's been steering 747s around the globe for two decades since then.

So why in hell isn't the handsome 54-year-old happy with his job?

“Be careful what you wish for,” he says. “The life of an airline pilot looks glamorous from the outside. But that is only the way it looks.”

Indeed, Griffith and his colleagues at Atlas Air blame the firm that hires them, German delivery company, DHL, for depressing pay and even skirting American law. They claim that pilots who work for FedEx and UPS are paid $300,000 annually on average, while they receive half that. Benefits are better, too. DHL is based in Bonn. Its U.S. headquarters is in Plantation.

“Our biggest complaint is that DHL is a multi-billion [dollar] conglomerate that operates worldwide," he says. "They are dodging the law in that they are very behind the scenes exercising control over carriers licensed in the U.S. Under current law, a foreign entity isn't allowed to control labor and economics in this country.”

If the Trump Administration's idea is America first, he says, this is a clear area where something should be done.
click to enlarge 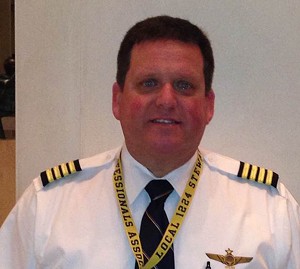 The pilots fly for DHL through the company’s contracts with carriers owned by Atlas Worldwide Holdings and ABX Air Inc., a wholly-owned subsidiary of Air Transport Services Group. Many of them belong to a local chapter of the Teamsters Union. They have watched as their business with DHL has skyrocketed. In 2008, Atlas operated six jets for DHL; today, it operates 41 jets for the firm. So the pilots have waged a two-year campaign to hold DHL accountable.

They've started a website, DHLcheatingamerica.com, and today, they'll unveil a billboard near the corporate headquarters in Plantation. It accuses the corporate overlords of dodging U..S. law, hurting competition and exploiting workers and their families.
Griffith acknowledges that pilots are better paid than taxi drivers or other menial workers, but says that is a reflection of their training. He could go to another firm, but would lose his decades of seniority, he says. "Atlas and ATSG are getting away with this in plain sight while the administration is saying we should take care of American workers first," he says. "You have a foreign company controlling American companies."

An email to DHL spokesman Claus Korfmacher on Friday was not immediately returned. His comment will be added when he responds.