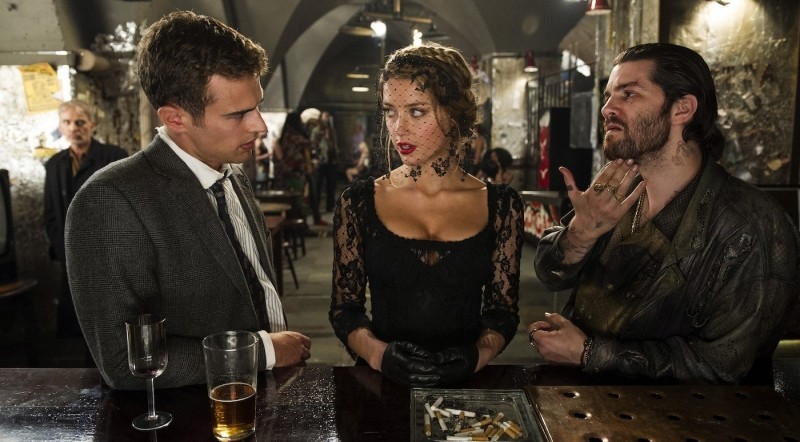 Courtesy of Amazon Studios
Amber Heard (middle) plays impossible sexpot Nicola Six, a fantasy woman for porn-hoarding pub thug Keith Talent (Jim Sturgess, right) and bored millionaire Guy Clinch (Theo James) in Mathew Cullen’s London Fields.
Two years ago, I got into a boisterous discussion with a friend over our vague memories of Martin Amis’ novel London Fields, which we both had read in the late 1990s. I recalled the book as a witty, apocalyptic meta-noir comedy, obsessed with nuclear devastation, pub hooliganism and the archetype of the femme fatale, one of whom gets lavishly parodied and sexualized throughout. My friend recalled it not as an often satiric exploration of dude novelists’ horniness but as the glibbest possible manifestation thereof, albeit rendered in glittering prose. Revisiting the book last year, I found the truth someplace in the middle. It’s deeply felt, incandescently written and both a parody of a creation like its central figure, the impossible sexpot Nicola Six, and a dead-serious, hand-in-pants celebration of such novelistic imaginings. The only thing I was absolutely right about: Amis’ dart-throwing, porn-hoarding pub thug Keith Talent is a comic creation on the order of Charles Dickens.

Finally onscreen after years of legal disputes, Mathew Cullen’s calamitous film adaptation plays like my friend’s hazy recollection of the book, an incomprehensible jumble of misogynistic claptrap. This London Fields dashes joylessly through dense material, too quickly for individual moments to register, much less resonate. The nadir, perhaps, finds Johnny Depp, as a gangster wearing one of the funny hats that producers use to lure Depp to film roles, asking a man he’s torturing, “Is your cock named Jesus?” Or perhaps it’s one of the many moments where Billy Bob Thornton, playing a novelist who is writing London Fields, hangs back and studies Amber Heard’s Nicola Six. She parades herself for the delectation of spiritless clods played by Jim Sturgess (as Keith Talent) and Theo James (as a bored millionaire), her character altering herself to become the woman of each of their dreams.

“She’s setting up the oldest conflict in the world,” Thornton intones in voiceover: “Two men. One woman. Someone dies.” Stripping Amis’ sprawling, brawling novel down to its chintzy murder-story through line robs the work of the book’s singular qualities: its rapturous prose, its paranoid philosophizing, its wild hilarity, its extravagant parody of a society ruled by blinkered, infantile, lust-crazed men. The film continually tells us that Heard’s character is fascinating, but it never lets her be so — it’s only interested in how she entices these guys. It also teases a mystery story — Six has a premonition that she will be murdered — without ever achieving the quality of mysteriousness. The world has lately lost its shit in particularly Amis-ian ways, and novels like London Fields and Money have much to reveal about the fevered minds and rotten heats of men with wealth and power. This London Fields, though, seems an entertainment for those men rather than one about them.