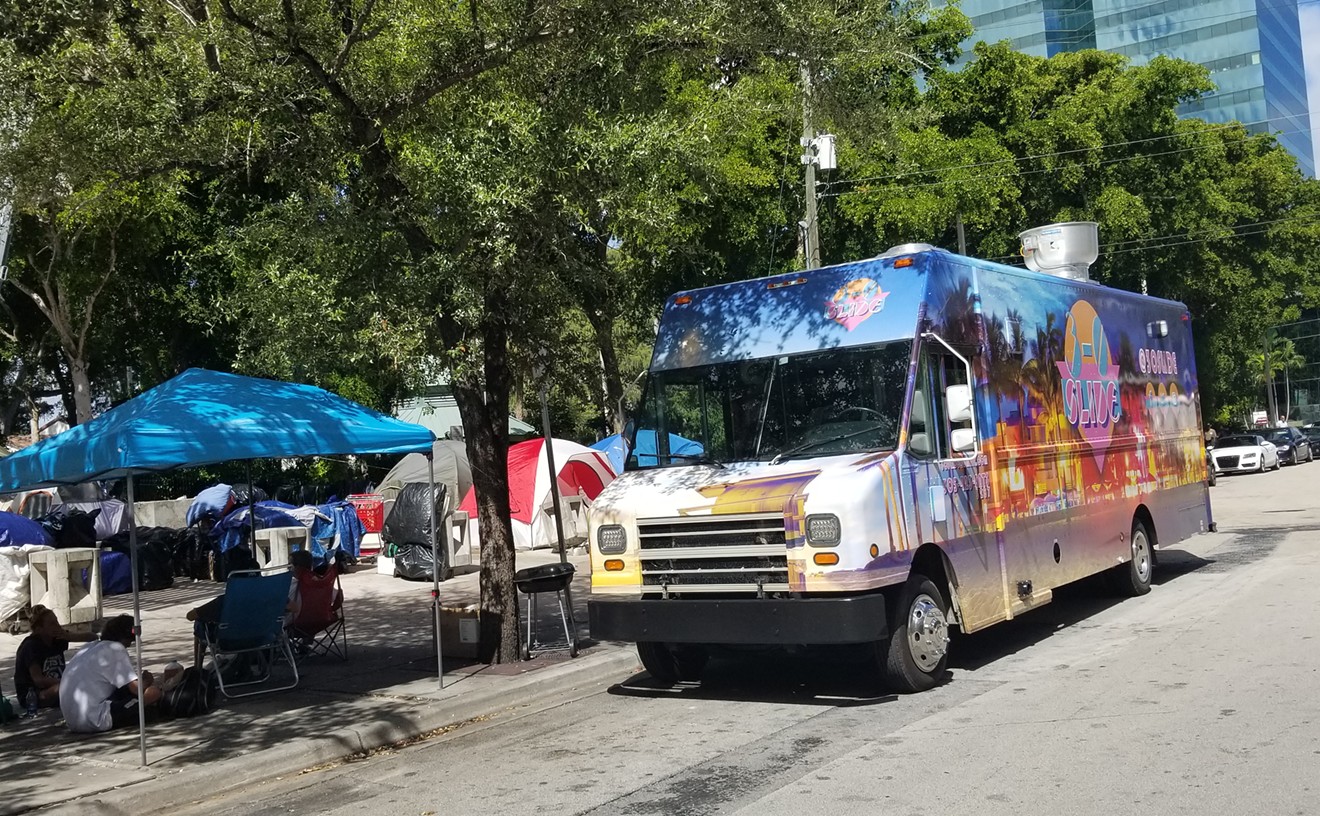 Courtesy 3-0 Slide
The 3-0 Slide truck recently parked at the homeless camp near Fort Lauderdale's Main Library to feed more than 85 folks.
Sell all of your belongings. Move yourselves (and your three kids) from Atlanta to Pembroke Pines. Open up a food truck.

Jay Roberts and his fiancé Katrina Jones quit their corporate jobs — Roberts worked logistics for a shipping company and Jones was a travel agent — to operate their mobile slider outfit, 3-0 Slide, since July.

During their first gig, they made $900 in two hours and now, just three months later, are booking corporate events and festivals on the regular.

“That first event was absolutely crazy,” Roberts says. “We never operated a food truck at all and then all of a sudden we had 75 employees of a local business to feed in a little over in an hour. We’ve been getting calls ever since and aren’t looking back.”

The 3-0 Slide menu has been a work in progress, with a lot of taste tests from close family and friends. They've settled on a menu that includes conch fritters, chicken and waffle sliders, and Philly cheese fries topped with steak or chicken.

But their most popular item to date is the Mac Attack — a beef burger topped with creamy mac and cheese and bacon — among a menu of other handhelds, including the “Cluckin” with bacon and a ranch or blue cheese drizzle.

As for the tips the 3-0 Slide crew receives, they have a selfless model to use them for giving back. All tips that the team received between July and early October were recently used to buy and prepare food for approximately 85 people in downtown Fort Lauderdale living outside of the Main Library. They parked their food truck outside and served people for a couple of hours.

Roberts and Jones hope to inspire more folks in and beyond the food truck realm to help too. They plan to feed the homeless at least once a month.

“With a little help, next time we want to hand out hygiene packets, too,” Roberts says. “So, we’re taking donations and really want to show people what we can do together.”