Keith Douglas
So — Laffing Matterz didn't face much competition for this commendation, but that doesn't mean it doesn't kick ass. One of a dozen extremely competent servers brings you a very-decent three-course meal, and then the whole wait staff mounts the stage for 90 minutes of raucous, topical song and dance that is politically acute and naughty enough to make the elder half of the audience blush. New Times' fave: a number in which the actresses morph into a troop of Broadway-obsessed Afghani ladies and then jazz-finger across the set in burqas, singing show-tune classics with Talibanized lyrics.

Always hustling, West Palm Beach's Schife and production partner OhZee have left an imprint on most of South Florida's major hip-hop albums released during the past two years. Rick Ross, Trina, DJ Khaled, and Trick Daddy have all employed Schife's machine-gun snares, booming bass, and insipid keyboard lines. On top of that, Schife can write a booth-clearing hook, and with a cigar-aged voice that can storm out a microphone, he often jumps on his productions as a performer. Additionally, Schife fronts his own group, Karbeen Mafia, featuring members Toe Down and G-Boi. As evidenced on the recently released No Nutz No Money mixtape, the group holds down some of the grittiest rhymes in the 954. As Schife says on "Getting to the Money," "Every time you see us in the building — it's going down."

"Set to Manual" at Girls' Club

Robin Hill
There are those who complain that art in the postmodern world is too often soulless and mechanical. Then there are those who offer alternatives. Fortunately, the women who run the 4-year-old Girls' Club fall into the latter camp, as demonstrated by this smart, sassy show featuring such "name" artists as Tara Donovan, Annette Messager, Beatriz Monteavaro, Gean Moreno, Carol Prusa, Rosanna Saccoccio, Kiki Smith, and Jessica Stockholder. The idea was to emphasize the human touch by showcasing "Works in Diverse Media Characterized by Intense Hand Manufacture," as the exhibition's awkward subtitle put it. More than 30 artists came through with art that fit the bill, ranging from installations and sculptures to drawings and paintings and everything in between, including video. Not all of those artists are female, even though the gallery specializes in women artists and the theme lent itself to work traditionally associated with women. And almost as a rebuke to local galleries whose shows rarely last a month, Girls' Club keeps its exhibitions up a full year, giving the art plenty of time to seep into the local community's consciousness.

The three great actors of Copenhagen were not meant to play people, exactly, but rather their shades: Werner Heisenberg, Niels Bohr, and Bohr's wife, Margrethe, meeting in a hazy afterlife and trying to reconstruct what may or may not have happened on a particular night in 1941. Bohr and Heisenberg were quantum physicists, and the models for this play's performances seemed to be the particles the men spent so much of their lives studying. Reconstructing that night, the actors zoom from one state to another — did they stand here? Did they walk there? Did they discuss this or that? — and everything about them, from their faces to their bodies to their voices, seems to be in a state of flux. Each of the actors communicated emotions forcefully without ever seeming to settle on any one in particular, and each spent the evening shrouded in irresistible mystery.

Eduardo Chacon
Curating art exhibitions can seem like thankless work. Not only do curators have to deal with the artists themselves, who are often sensitive and sometimes downright temperamental, but they also have to work with museum directors, a notoriously driven lot with, shall we say, healthy egos. As senior curator at the Boca Museum, where she has been since 1997, Wendy Blazier is the unseen hand behind the scenes. She knows what it's like to run the show from both perspectives, having previously worked as executive director and curator at the Art and Culture Center of Hollywood for more than 15 years. In the past year, she has worked with living artists (Stephen Althouse, Clyde Butcher, Enrique Martínez Celaya), and she has overseen exhibitions curated elsewhere before they arrived, such as the landmark M.C. Escher retrospective and the upcoming Elvis show. She also manages the museum's extensive permanent collection, a significant portion of which is always on display in the upstairs galleries — a daunting task in itself but just part of the job description for the seemingly tireless Blazier.

Only a hard-working band like Community Property is built to snag two Battle of the Bands victories in one day. On a fateful day in late March, led by ferocious frontman Lucian, this rock and soul quartet ran circles around its competition first at the Seminole Casino's Classic Spring Block Party, then at New Times' own musical brawl. Muscular beyond all else, each Community Property statement tells the crowd "get down with us or get the hell out of the way." Owing bits of its sound to Jimi Hendrix, Red Hot Chili Peppers, and John Belushi's character in The Blues Brothers, the band exudes showmanship that involves executing everything tight as hell and making it look like a gas. Playing a fusion of blues, jazz, funk, and rock 'n' roll is one thing, but flinging oneself across the stage and feeling it is something entirely different.

Eduardo Chacon
Just last year, we were welcoming Enrique Martínez Celaya back to South Florida, the artist having decamped from his Delray Beach studio a year earlier and moved back to Los Angeles. But who would have guessed that the itinerant painter, philosopher, photographer, poet, and publisher — he was born in Cuba, grew up in Spain and Puerto Rico, teaches in Colorado and Nebraska, and has shown all over the world — would make a comeback as dramatic as this one-man show? For years, Martínez Celaya has steadily produced some of the most intellectually rigorous art of his generation (he's still in his 40s). With this, his most extensive South Florida exhibition since "The October Cycle" at the Museum of Art|Fort Lauderdale in 2004, he proved he still has few equals. Although the show included only 19 works, the Boca Museum wisely gave it most of the first floor, and the often-monumental pieces commanded the space with grace and authority. The kicker: The works are all from a private collection, that of filmmaker Martin Brest. Envy was never so easy.

Copenhagen is a play about quantum mechanics. At least, it is a play about the way one aspect of quantum mechanics, called "quantum indeterminacy," mirrors our understanding of history. In particular, it's about our understanding of one weird night in 1941 when Nazi scientist Werner Heisenberg visited his old friend, Niels Bohr, to talk about the Nazi plan to build a nuclear weapon. To mount it convincingly, Lewis had to understand a lot about the trickiest aspects of modern science, and he had to conceive of a way to get the point across to audiences who might understand none of it. His production communicated with remarkable cohesion on every level — from the blocking to the acting to the program to the lighting — and became a strange and frightening masterpiece.

After self-released versions of Astro Coast floated around late last year, Surfer Blood's statement got solid with an official release via Kanine Records in January. Aside from its nationwide acclaim (and inevitable backlash), Astro Coast holds up when viewed through the lens of South Florida's beach-resort culture. "Swim (To Reach the End)" turns JP Pitts' voice into an invigorating hurricane. His commentary on "Catholic Pagans" smacks of the listlessness of living in a region that doesn't always feel so connected to the rest of the country: "Never could be still for long/And I could never hold a job/Coupled with a weakness for cocaine and liquor/Not much you can do for love." Astro Coast turned out to be Surfer Blood's ticket out — and a peek inside what's possible for everyone else.

Rumor has it that the devil grew a third horn after hearing this Fort Lauderdale outfit's song titled "Eating Drinking Shitting." Frontman Tom Rampage, who cultivates a serious following as bartender at the Poor House in downtown Fort Lauderdale (see more on this below), bellows with such force that any mullets within 1,000 feet start flapping uncontrollably. "Fuck you, motherfucker" is rarely screamed with this level of commitment and with such a thrust from the supporting cast of badass players. And if it isn't already clear, we couldn't give this honor to a nicer bunch of guys.

"Programmed to Kill" by Murderous Rampage: 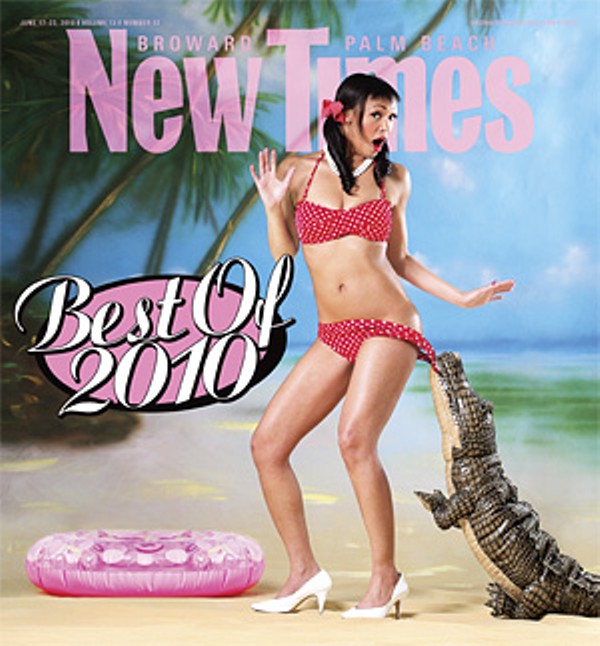