A True Story of Love, Race and Royalty Gets Crammed Into A United Kingdom 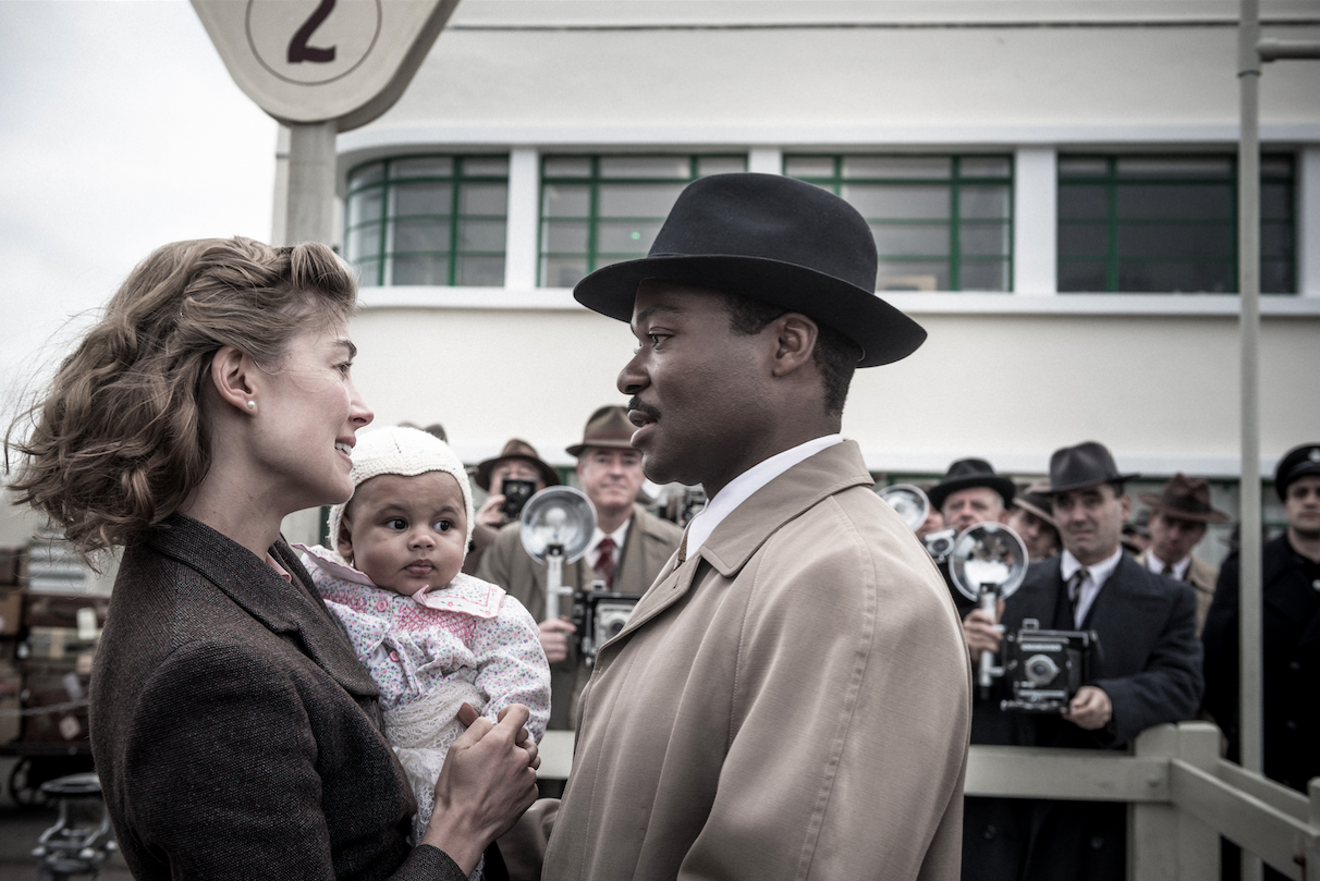 In director Amma Asante’s epic political romance A United Kingdom, David Oyelowo and Rosamund Pike star as Seretse and Ruth Khama, the interracial royal couple who stunned the world when they fought to rule the country that would become the Republic of Botswana. The story’s a wildly interesting history lesson on African poverty, the rise of apartheid in the late 1940s and Britain’s passive role in separating Botswana’s blacks from whites. But here all that complexity plays more Disney than drama with a script from Guy Hibbert (Eye in the Sky) that turns love into a montage and politics into a trite cartoon of good vs. evil.

The couple lindy-hops through courtship and right into an engagement in the early scenes, which are set to an American jazz soundtrack. They first lock eyes at a dance in London, where he’s a law student and the she’s an office worker. In real life, the two met secretly for a year before Seretse even got the nerve to ask, “Do you think you could love me?” But the script ramming right through the early romance and into the marriage leaves so many open questions about the characters’ love; as portrayed in the film, they barely know one another when Ruth decides she’s going to move to Africa to be Seretse's queen.

Against the wishes of their families — and the British and South African governments — Seretse and Ruth marry and travel to Bechuanaland so that he can ascend the throne and use his education to help his people. Soon after their arrival comes one of the film’s most poignant moments: Seretse’s aunt Ella (Abena Ayivor), who’s the current queen, drills right into the thin white woman before her to ask if Ruth knows what it would mean to be a mother to the nation and its predominantly black citizens. Ella’s got a good point: At a time when white people are swarming into Bechuanaland to turn black citizens into servants, how good an idea is a white queen? Later, Ruth sits in her room, practicing British queen skills like waving and smiling, while the tribe’s women break their backs outside to get food to their families. But A United Kingdom doesn’t fully explore this cultural distance; the film’s structure requires that Ruth be quickly accepted into the tribe, so the story can move on to Britain’s treachery.

Soon, Seretse’s tricked into coming to London and slapped with a five-year exile from his home country, ostensibly to make the South African apartheid people happy — mixed-race royalty right next door doesn’t bolster their separatist policies. But we find it’s really the British — including a comically stereotypical mustachioed villain — who are mostly opposed to the marriage. Unfortunately, when Seretse and Ruth are apart, there’s a dearth of scenes in which we can see the couple developing their own authentic language of love. Oyelowo and Pike are certainly world-class actors, both exhibiting flashes of their capabilities with a misty eye or shaking hand here and there, but the scope of the politics in this story is too wide to make room for an in-depth portrayal of Seretse and Ruth’s relationship — and I haven’t even covered the diamond-mining subplot.

In some spots, exquisite performances are even cut short by overzealous editing in service of covering narrative ground: When he’s at his wit’s end stuck in London away from his wife and new baby, Sereste madly sweeps everything off his desk — but we’re already in the next scene before his books hit the floor. The exploits and accomplishments of these two trailblazing lovers could fill a miniseries. Condensed to 100 minutes, character development suffers. Asante’s already proven she can world-build while wrangling a romance with her indie hit Belle, but she needs a jewel of a script, and this one is no diamond.