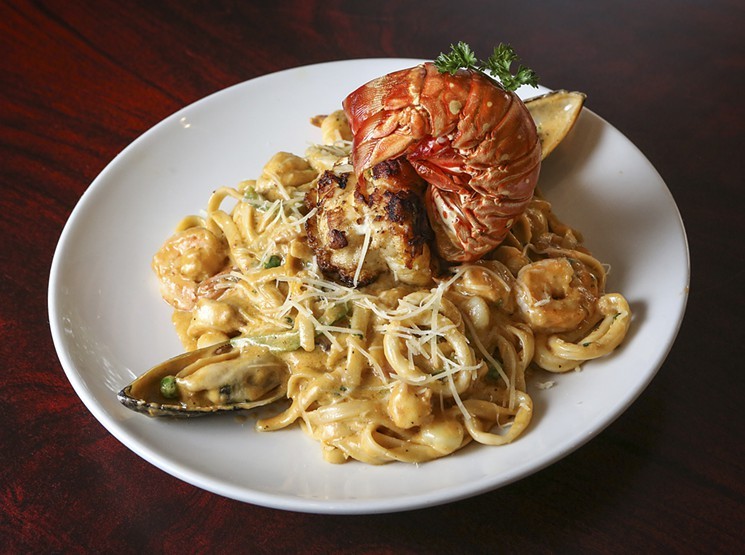 Peruvian cuisine — marked by its fusion of various global cuisines, those sweet yellow chili peppers, giant kernels of maize, and fresh seafood — has grown exponentially in popularity. No matter what your tastes, once you get over the unfamiliar-sounding names and each dish's seemingly incongruent pairings, you'll find that the dishes of Peru offer a bit of something for everyone. At least, that's what the trio of owners at Runas Peruvian Cuisinein Hollywood are trying to prove. Their snug little restaurant, located just a few blocks north of the city's downtown restaurant row, was once home to Hemingway's Lounge and, a decade ago, the Hollywood City Hall staff. Today, the eatery offers more than 45 traditional Peruvian staples that range from veal heart anticuchos (meat skewers) and parihuela (an aphrodisiacal seafood soup) to a pesto fettuccine and even octopus sushi. The most popular dish: Ceviche, the country's famous cured-seafood salad, here served in a half-dozen traditional varieties. The signature Runas ceviche is a fresh seafood medley — a white-fleshed Peruvian fish called corvina, firm rings of squid, plump shrimp, and a single oversized green mussel — marinated in an ochre-hued juice made from a blend of Peruvian yellow pepper, cream, and lime juice. Rather than let the fish sit in an acidic bath, Santos gives the fish a quick flambé in an Asian wok, giving the entire dish a unique, smoky kick. It's plated with a fat slice of cinnamon-scented sweet potato, crowned with julienne sliced red onion and chiffonade cilantro. End your meal here with a pisco sour, as is traditional, and your taste trip to Peru will be complete.