With the May release of their mini-album Under Cover, A.C.E hit the world stage dancing. Image via YouTube
K-pop has been building a wave of talent whose ripples began reaching the U.S. a few years ago and now has turned into a rogue tsunami. From group appearances on morning talk shows to charting Billboard's pop charts, the rise of K-pop is real — and from the talent now leading the genre and the sound that's developing, it looks to have staying power.

As Harvard professor and pop-culture gadfly Cornel West said recently on the Joe Rogan Experience podcast, “Those Koreans have a soulful sound, man, that will blow your mind.”

Currently one of K-pop's biggest acts, South Korean boy band A.C.E is bringing their infectious sound to South Florida for their Under Cover: Area US tour.


A.C.E — yes, that's three capped letters and only two periods, which somehow is the translation for the group's actual name, ??? in Korean — has been one of the most requested acts by local music fans on MyMusicTaste, a global platform for music fans to request what artists they most want to see perform in their area.

Skeptics may sneer — the five-member troupe made its name as a cover band. But I would argue that playing covers of popular songs is how most artists get their start. So much so, it's baked into our pop music traditions. The Beatles, for one, started out playing Elvis covers and old American soul songs long before they wrote some of the greatest original pop music the world has ever known.

The five-member pop group A.C.E started out busking on the streets of South Korea, a common practice for young artists in the K-pop scene, pairing their choreographed dance routines to American pop songs.

And chief among the American artists they're influenced by is Beyoncé. “Every album is a masterpiece," A.C.E members told New Times, responding to questions via email through a translator. "People all over the world love and want to cover her songs. Each performance is perfection. She is an artist with lots for us to learn from.”

Notice they mentioned not only the quality of her music, but the perfection of her performances. This is something that is extremely important to the K-Pop scene. Artists are often groomed from a young age to become pop acts in South Korea, taking immense pride in choreography and performance. 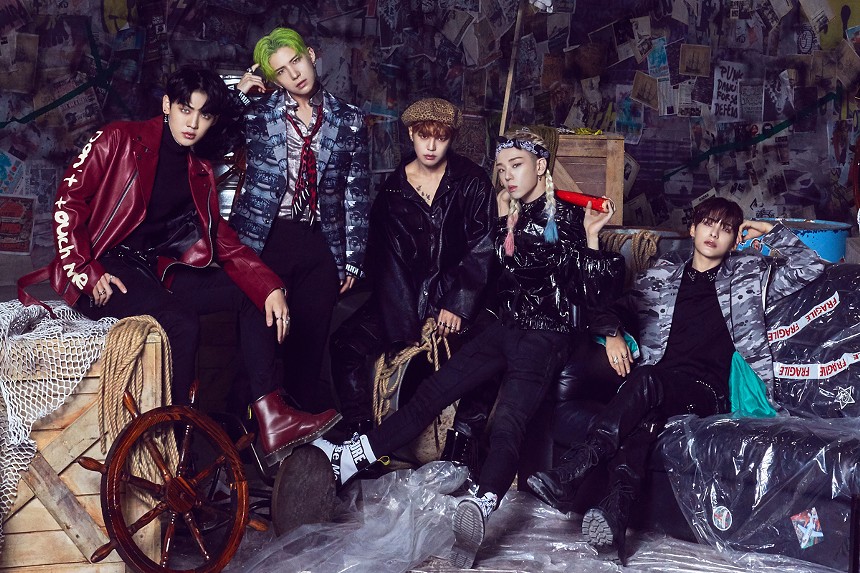 South Korean K-pop sensation A.C.E is set to play Revolution Live in Fort Lauderdale on Wednesday.
Photo courtesy of MyMusicTaste
In South Korea's pop music industry, the label and management have complete control. From an artist's trajectory to what the narrative is, K-pop acts are masterworks of packaging, with their promoters even going so far as to stipulate to reporters the order in which the names of band members should be noted.

The hold the labels and handlers have on K-pop artists recalls the days when the mob ran American radio stations and Motown was run like mafia fiefdom.

Before critics or music nerds started talking about the "new" trend coming over from South Korea, know that despite the grip on K-pop record execs have, the underground producer/dj scene in Seoul is well-established and strong. The electronic production that initially came out of this scene was often bass-heavy, with influences from various hip-hop subgenres and EDM, contemporary American pop, under-girded by drum and bass. You can hear the influence of Seoul's underground scene in songs like "Do It Like Me" from A.C.E’s Under Cover EP.

A.C.E released its first full-length album, Adventures in Wonderland, in 2018 — in their third year of "practicing together," as they put it. An upbeat pop record that has songs like "Take Me Higher" and "CACTUS," with the makings of top-rate pop singles. But tracks like these also show how significantly this group has grown, given the work they're doing this year.

Adventures in Wonderland compiled some previously released singles as well as a slew of new songs. The album also led to the release this year of two EPs that have furthered A.C.E's stated aim to inspire adventure.

Still, A.C.E comes with a ton more swagger on their most recent EP, Under Cover. A strut that comes from their growing confidence and from what they've taken away from what they have done already. Plus, you know, Beyoncé.

Something rather interesting about A.C.E’s songwriting is they fuse English and Korean lyrics throughout their records. Often their hooks are in English while their verses are in Korean. It’s an interesting choice — and, as a side note, shows just how many people in Korea speak English. This isn’t the first time bands and artists from non-English-speaking countries have made records in English, but usually they don’t switch between different languages in the middle of a song. It’s a creative move that has paid off well for A.C.E, they manage to combine their multilingual lyrics very well with their eclectic production choices.

Under Cover: The Mad Squad, released on October 29, is much more hip-hop heavy than A.C.E's previous work. The track "Savage" is an EDM/hip-hop Korean anthem that is a testament to their songwriting creativity. With all the turnarounds and beat shifts during the track, the group attacks the production like true party starters. Their single "Take Me Higher" off their debut album is featured in a completed version on The Mad Squad.

The future is bright for A.C.E and we can only sit back and listen as they continue to impress the world with their pop-music chops.

A.C.E. 7 p.m., Wednesday, December 11, at Revolution Live, Fort Lauderdale; jointherevolution.net. Tickets are $55 via ticketmaster.com.
KEEP NEW TIMES BROWARD-PALM BEACH FREE... Since we started New Times Broward-Palm Beach, it has been defined as the free, independent voice of South Florida, and we'd like to keep it that way. With local media under siege, it's more important than ever for us to rally support behind funding our local journalism. You can help by participating in our "I Support" program, allowing us to keep offering readers access to our incisive coverage of local news, food and culture with no paywalls.
Make a one-time donation today for as little as $1.