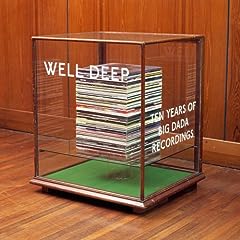 Longevity in hip-hop is increasingly rare, so milestones should be memorialized. Enter Well Deep, two CDs (31 tracks total) marking the first decade of U.K.-based indie label Big Dada. An offshoot of the quick-cut quarry known as Ninja Tune (home to Coldcut, Kid Koala, etc.), Big Dada has spent its dime of time offering gutter bangers and lyrical trepanning. Initially a showcase for establishing U.K. MCs in their own rite (helping cement the status of Roots Manuva, TY and Wiley, among others), Big Dada expanded its reach to France (TTC), Philly (Diplo, Spank Rock) and beyond. Of course, considering the label's Anglo origins, it's not farfetched to credit Well Deep as a play on "well" not only as a synonym for "skillfully," but also meaning a source of water, as Big Dada pulls from a deep pool of talent.

Such a forward-thinking label should be discussed in less antiquated terms, however. If we're equating hip-hop to the game-console wars, the mainstream is a PlayStation 3 and the indies are a Nintendo Wii. While most hip-hop is so single-mindedly concerned with maximal visuals—finding it hard to develop forward-thinking engines for its platform—a label such as Big Dada emphasizes rock-solid game and body mechanics over touting specs for specs' sake. Instead of convoluted electronics, you get a focus on flow in its many forms.

Roots Manuva, TY, Infinite Livez and New Flesh establish the touchstones of British boom-bap, with its low end in the frayed dance halls, boots-knockin' swerve and future funk's airlocks. With their productions candied and crunchy like some sort of Honeycomb cereal for the earhole, MCs including Wiley, Majesticons, Infesticons, Busdriver, Spank Rock and TTC spit glitchy electro-cution. Beats go from schizophrenetic (Lotek HiFi, Shadowless) to minimalist and mentalist (cLOUDDEAD remixed by Boards of Canada, Bigg Jus). Lyrical sneers and dubby snare flares are the ballast, and overall, Well Deep is the buoy for charting a course into eclectric hip-hop's deep waters. -- Tony Ware