The duo — drummer Josh Dun and singer, pianist, and guitarist Tyler Joseph — is becoming known for energetic live performances and extravagant stage shows, and last night did not disappoint.

Joseph kicked off a night of overt symbolism by wearing a black ski mask and wielding a flaming torch, which he used to ignite a burned-out car into 15-foot flames.

Heading straight to his drums, Dun wore a bandanna over the lower half of his face and the band’s signature “X” in yellow tape across his chest.


The song “Jumpsuit” saw Joseph tap into the angst of a generation. Standing atop the flaming car, he leapt toward ravenous fans who, in love with their own inner turmoil, couldn't get enough of the band’s mashup of indie, alternative, hip-hop, pop, reggae, and rap. 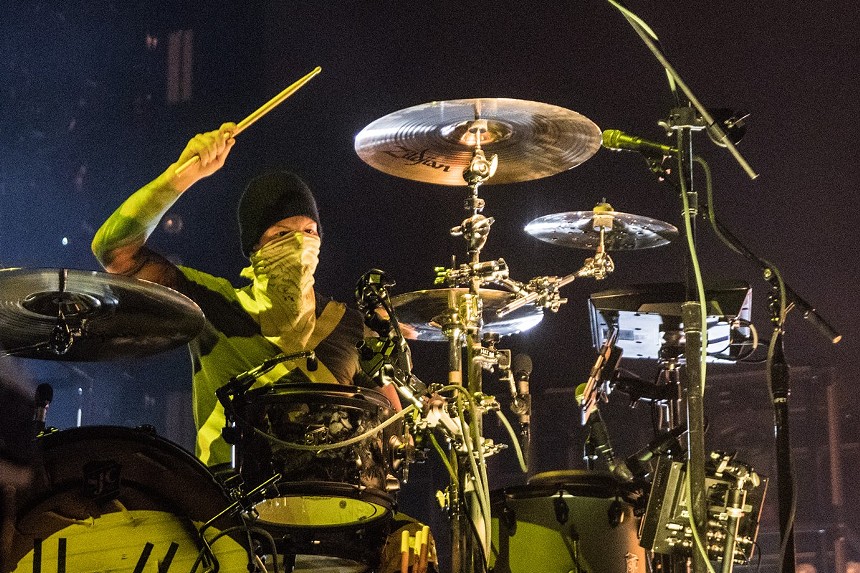 See more photos from Twenty One Pilots' Bandito Tour at the BB&T Center here.
Photo by Sean McCloskey / SFLMusic.com
The Skeleton Clique (a moniker for TOP fans) was decked out in yellow and black in homage of the new album, and teenagers, who dominated the audience, sported geometric yellow tape over their head-to-toe TOP gear.

For “Levitate,” the stage slowly rose 25 feet. Joseph laid down his finest rap above pulsating laser beams and spotlights. With every line, he helped emo fans ameliorate the pain of life.

He popped up in the middle of the crowd for “Fairly Local,” and as the song ended, he pulled off his ski mask, exposing his face for the first time. The crowd went mad.

He then trailed a video of a moving red hat back to the stage, where his trademark cap slowly descended from the ceiling. “There’s my little guy!” Joseph said as he grabbed it and ripped into a fun and funky version of “Stressed Out.”

Vacillating between slow, deliberate choruses and complicated raps, TOP stuck to what it knows: confusion, frustration, and fear.

Joseph had the crowd jumping, swaying, singing, and flashing their cell phones in unison. Fans obeyed his every command, making it clear why TOP is packing stadiums and currently accounts for three of the Top 25 albums on Billboard’s alternative chart.

The magnitude of their recent successes is not lost on Joseph or Dun, who paused periodically to bask in gratitude from fans who embrace brooding questions about death, trust, loyalty, and emotional darkness depicted in many of TOP’s songs. 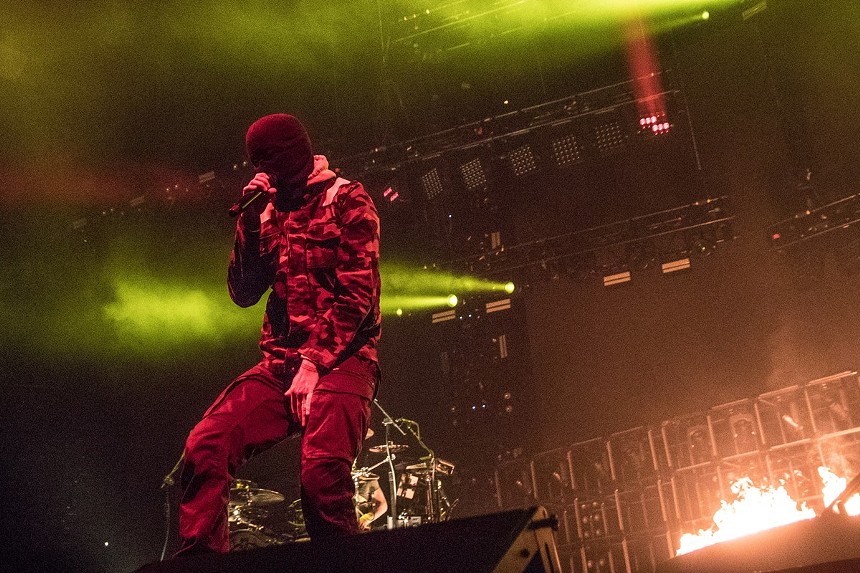 See more photos from Twenty One Pilots' Bandito Tour at the BB&T Center here.
Photo by Sean McCloskey / SFLMusic.com
The duo took the energy down a notch for the beginning of “Heathens,” from the movie Suicide Squad. Playing piano, Joseph sang only one line before passing the vocals to concertgoers, who knew the lyrics as well as Joseph himself.

Dun stole the spotlight for a crowd-pleasing drum solo while Joseph switched into a flower-print shirt and strummed a ukulele, rolling into “We Don’t Believe What’s on TV,” “The Judge,” and “Lane Boy.” It ended with a dozen smoke machines propelling pillars of smoke to the ceiling while masked men in white hazmat suits sprayed smoke over the crowd.

Soon, Dun’s drum set rose 20 feet into the air for “Nico and the Niners.” Then, during “Taxi Cab,” Joseph traversed the crowd on a massive metal bridge that stretched from the main stage to a smaller one in the rear of the venue.

Instead of taking the bridge, Dun opted to walk right through the middle of crazed fans. The two played “Neon Gravestones,” “Bandito,” and “Pet Cheetah” on the smaller stage, which was covered part of the time by a sheer black drape alive with holograms of smoke and birds as well as images of the duo.

They made their way back to the main stage for “Holding on to You,” during which Joseph stepped off the stage and into the crowd, which held him up while he sang. Dun did a backflip off Joseph’s piano before returning to his drum kit, where he took off his shirt to expose “Tyler” written in black across his abdomen.

See more photos from Twenty One Pilots' Bandito Tour at the BB&T Center here.
Photo by Sean McCloskey / SFLMusic.com
Opening acts Awolnation and Max Frost, who kicked some serious ass in their own right, joined TOP for covers of the Goo Goo Dolls' “Iris” and the Beatles' “Hey Jude.”

TOP took back the reins for “My Blood” and then “Morph,” during which Dun played above the audience on a platform while fans held up a mini version of his drum set.

TOP brought it home with “Leave the City” and “Trees,” replete with a venue-wide laser light show, floor-to-ceiling smoke stacks, and the return of the burning car.

“We’re from Ohio, but coming down to Florida always feels like home,” Joseph told the Skeleton Clique at the end of the show. “I wish I could take this group everywhere with us.”

No doubt the devoted fans last night would be more than happy to grant him that wish.
KEEP NEW TIMES BROWARD-PALM BEACH FREE... Since we started New Times Broward-Palm Beach, it has been defined as the free, independent voice of South Florida, and we'd like to keep it that way. With local media under siege, it's more important than ever for us to rally support behind funding our local journalism. You can help by participating in our "I Support" program, allowing us to keep offering readers access to our incisive coverage of local news, food and culture with no paywalls.
Make a one-time donation today for as little as $1.