Rivers Cuomo of Weezer. See more photos from Weezer and Pixes at Coral Sky Amphitheatre here. Photo by Ian Witlen
Last night, West Palm Beach was the launching pad for this summer’s Weezer and Pixies double-headliner tour. Fans were privy to a trifecta of bands that made for the perfect evening of rock 'n' roll, simultaneously presenting the past, present, and future of rock.

Liverpool natives the Wombats, a headlining band in their own right across the pond, began the evening with a short but spirited set. “So it’s 90 percent humidity?” frontman Matthew Murphy asked the crowd early on before churning out a series of equally warm yet welcoming singles. Because the crowd was still filing in, Coral Sky Amphitheatre was only around half capacity — a shame considering the quality of the show by the three-piece.

The Wombats. See more photos from Weezer and Pixes at Coral Sky Amphitheatre here.
Photo by Ian Witlen
They closed with one of their first big hits, “Let’s Dance to Joy Division,” a cheeky number that ends by repeating the line “So happy, yeah, we’re so happy,” a jubilant refrain that expressed both their joy at being on this tour (as per their recent conversation with New Times) as well as the vibe buzzing through the South Florida audience.

If the Wombats were a new thrill for fans in attendance, the same could not be said for the Pixies, an old flame that still burns brightly for so many listeners. When Black Francis and company took the stage, so did the history of modern alternative and indie rock. In addition to icons such as the Cure, David Bowie, Michael Jackson, and Prince, the Pixies are arguably one of the top five most influential acts of the past 30 years. Without them, we wouldn't have Nirvana or Radiohead; indeed, the entirety of the early-'90s alt-rock renaissance wouldn't have occurred. 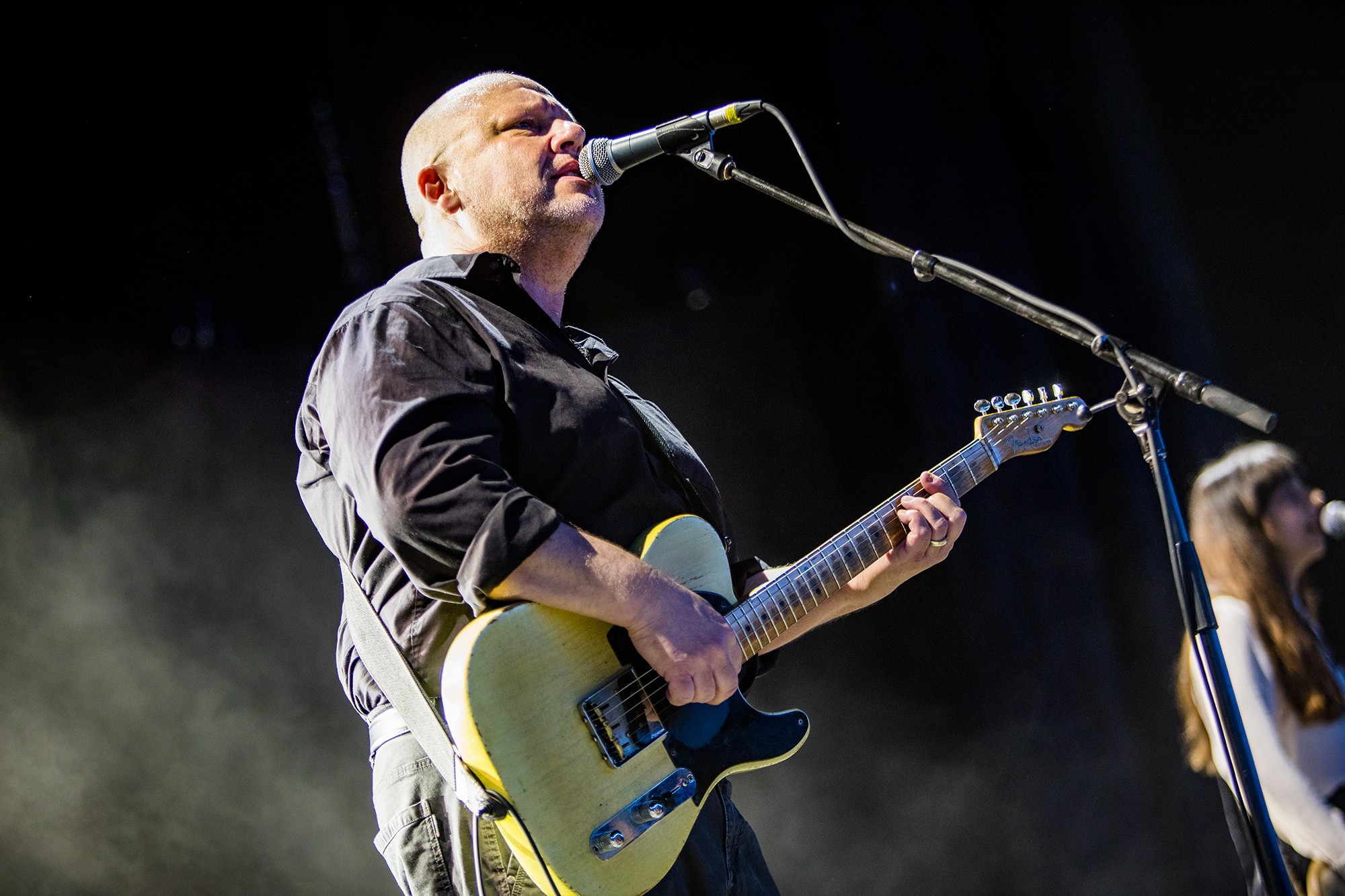 Pixies. See more photos from Weezer and Pixes at Coral Sky Amphitheatre here.
Photo by Ian Witlen
Because so many Pixies songs are loud, quick bursts of manic, screeching energy, the quartet was able to power through a monstrous number of classics, including “Caribou,” “Gigantic,” “Gouge Away,” “Monkey Gone to Heaven,” “Wave of Mutilation,” and their most mainstream hit, “Where Is My Mind?” made famous by the Fight Club soundtrack. They treated that last one as just another song, burying it in the first half of their set list, and played it just off-kilter, offering a different take on the original.

It’s telling that a venerated and beloved band such as the Pixies, who have been around longer than some of the fans in attendance have been alive, gets second billing to Weezer. The Pixies' songs never exactly caught fire with the general public, but they caught the ear of the right people, namely fellow musicians such as Weezer and the Wombats. They also inspired a legion of loyal fans, many of whom came to the show Friday night as a pilgrimage.

Pixies. See more photos from Weezer and Pixes at Coral Sky Amphitheatre here.
Photo by Ian Witlen
The Pixies came on; played their jaunty, fuzzed-out songs — giving each and every track special attention, Black Francis shredding with his voice all these years later — took a bow; and got off the stage. There was no mucking about, and they gave the crowd precisely what it wanted. In fact, by stringing together so many songs, they crafted a hypnotic hold over those ignoring their phones.

Though some attendees treated the Pixies as beautiful, crunching background noise, everyone in their seats and on the lawn stood at attention for one of the few legitimately huge rock bands still left in the industry.

Weezer emerged from behind a veil that dropped to reveal a stage designed to look like a garage, where the band began its career. The set had hints of the high school from their Happy Days-inspired video for “Buddy Holly.” It was the first big visual hint that the band was going old-school in more ways than one.

Weezer. See more photos from Weezer and Pixes at Coral Sky Amphitheatre here.
Photo by Ian Witlen
Weezer and Rivers Cuomo, in all his nerdy-cardigan glory, went back to their roots by playing half of their debut record, The Blue Album, treating die-hards to favorites such as “In the Garage” and “Surf Wax America.” They covered the Turtles' “Happy Together” and later “Wonderwall” by Oasis. The latter was performed by Cuomo acoustically, in the middle of the amphitheater, while wearing a sea captain’s hat and riding a scooter. They also trotted out their faithful interpretation of Toto’s “Africa” — their top-streaming song on Spotify and the result of an online Twitter campaign by fans.

Cuomo is the new Dick Clark, the never-aging teenager, if Clark had sung songs about girls and hash pipes and the inability to stop partying. The Weezer frontman went through three costume changes, all representing his different levels of partying, beginning with a shirt and tie, then a Weezer soccer jersey, and finally a rad jean jacket.

Weezer. See more photos from Weezer and Pixes at Coral Sky Amphitheatre here.
Photo by Ian Witlen
Midway through, Cuomo shouted, “That was a really kick-ass concert... Let’s keep it going!” The second half of the show saw a Green Day cover, “Basketcase,” Weezer's perennially sunny “Island in the Sun,” and one of the only new tracks the audience heard all night, “Feels Like Summer,” complete with flames shooting from the sides of massive speakers. Weezer wrapped up the show with a one-song encore consisting of , epic rendition of “Say It Ain’t So” that was gorgeous in its size and scope (thanks in large part to audience participation).

Amid all of the evening’s nostalgia, the Pixies and Weezer taught a lesson on the evolution of modern rock while also showing why they are both hugely influential in the lives of thousands of bands that have and will come after them.

Best of all, they showed the kids how a proper rock 'n' roll show is done.
KEEP NEW TIMES BROWARD-PALM BEACH FREE... Since we started New Times Broward-Palm Beach, it has been defined as the free, independent voice of South Florida, and we'd like to keep it that way. With local media under siege, it's more important than ever for us to rally support behind funding our local journalism. You can help by participating in our "I Support" program, allowing us to keep offering readers access to our incisive coverage of local news, food and culture with no paywalls.
Make a one-time donation today for as little as $1.