Do You Like Def Leppard Ironically, for Real, or Always and Forever? 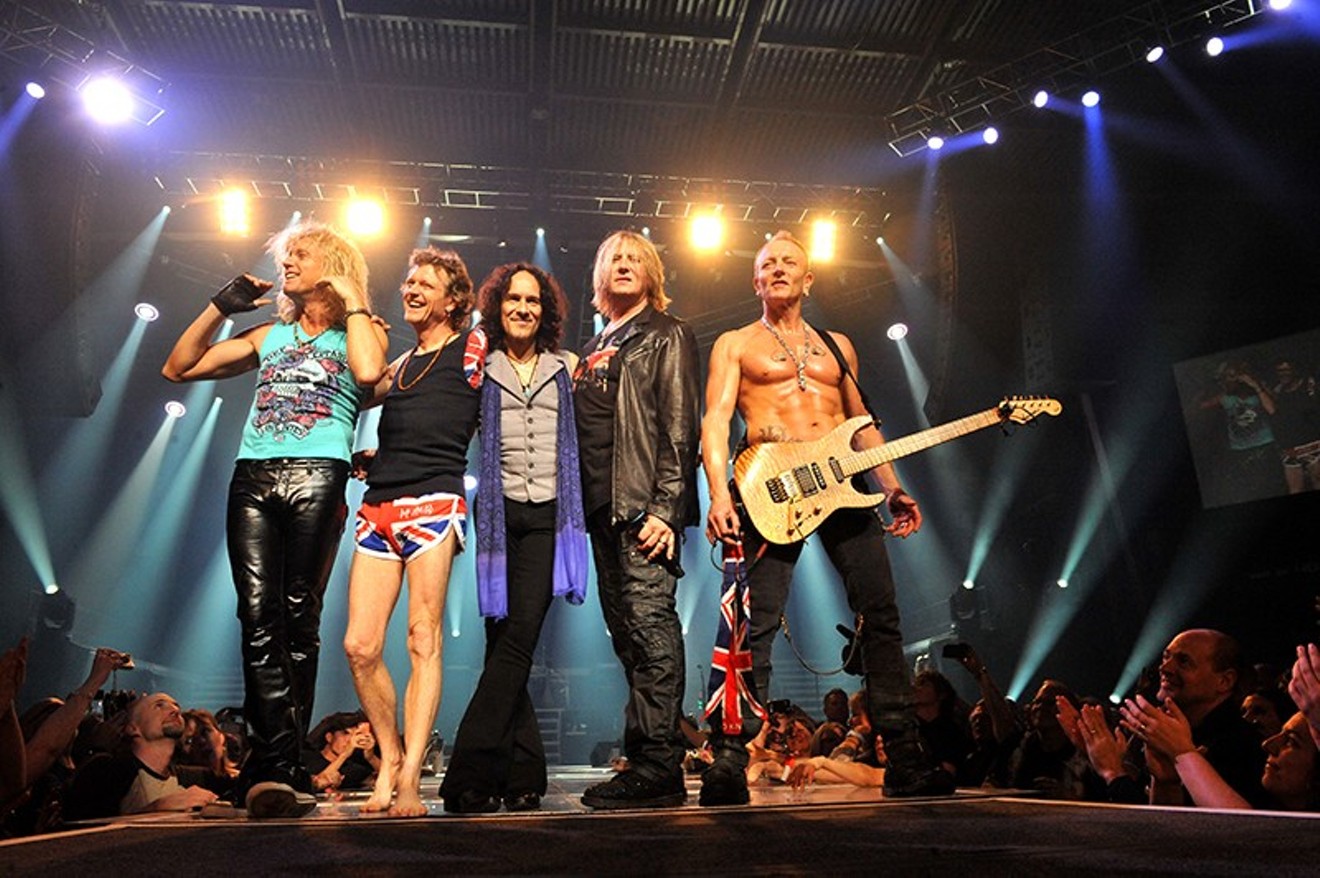 Def Leppard Courtesy of Def Leppard
Today, I drove past a hip-looking young woman with short black bangs concentrating on her phone. She was standing on the corner of a street lined with cool stores and was wearing a Def Leppard crop-top with leopard-print short sleeves and a high-waisted skirt. I wondered: Is she wearing the shirt because she likes the group ironically or because she actually appreciates the music? Or both?

Her fashion statement paralleled my feelings on the British '80s hair band that was more pop than metal but always rocked. If the T-shirt had featured the Poison logo — a much cheesier hair metal band that made brazen party tunes while wearing red pouts — I would know it was worn with ironic appreciation. If she had on a Rush shirt, I would have thought she was a fan of drummer Neil Peart, an all-time music nerd favorite. Def Leppard though is a band from a frivolous era that actually had power and substance. People can appreciate the music honestly or just because their ears are accustomed to the cry of singer Joe Elliott after a lifetime of radio exposure.

A similar band is outfit AC/DC; producer Robert John "Mutt" Lange is also responsible for Def Leppard's fame. Though the group formed in 1977, it was 1981's High 'n' Dry that took off. The group gained more fame in 1983 with Pyromania, which featured eternal classics "Photograph" and "Rock of Ages," and 1987's Hysteria, which you'll recognize as a hit song alongside "Pour Some Sugar on Me" and "Love Bites." Def Leppard continued to release less remarkable albums over the years, ending with 2015's Def Leppard. After a total of 11 LPs, they have been relegated to "classic rock," even though the songs still float without a lifeboat.

The band has included Elliott, bassist Rick Savage, drummer Rick Allen, and guitarists Phil Collen and Vivian Campbell. These men crafted the most resilient rock songs of that era — if you set aside David Lee Roth's Van Halen days. Def Leppard never had hot band drama like Motley Crue. Its greatest nonmusical claim to fame arrived when drummer Allen was in a car accident in 1984 and lost his arm and continued to play. He uses four electronic pedals for his left foot to substitute for the sounds he'd make with his missing limb — and he still has made best drummer lists.

This is a group that can't help but win. Frat guys will forever be "Armageddon It" or sweating through "Pour Some Sugar on Me" at the karaoke mic. And the world's music snobs will continue to wile out to "Photograph," which is so rocking that you can have impeccable taste and still enjoy it. The band has so many hits that it's a ubiquitous presence in the lives of us all.

Def Leppard has songs you both want to hear in a crowd and enjoy solo. There's Pyromania's "Rock of Ages," a cool, accessible song with an incredibly dorky video and so epic a title that it was cribbed for a hit musical and film. The long-running musical didn't even feature the song, but the 2012 Hollywood cheese fest flick starring the king of corny, Tom Cruise, totally did. The refrain asks and answers, "What do ya want?/I want rock 'n' roll." This is a song for fans who really like the tune, but want to pretend they only like it for irony's sake. It's also a soft metal song that wouldn't have the casual fan changing the station.

Contrast that with Hysteria's "Love Bites," a supereffective power ballad perfect for when you need a little cry and some time alone. It opens with the relatively relatable questions a jilted lover might ask: "When you make love, do you look in the mirror?/Who do you think of? Does he look like me?" Sure, not all of the lines in the song make sense together, but they have the same sensibility that's easy to connect with "Love Bites."

Def Leppard continues to tour, this year coheadlining with Journey, a contemporary band ironically far easier to like at karaoke or in your car than in more personal moments. Even after all of these decades, the two bands will be playing the huge BB&T Center. Not many hair bands from the '80s can still fill an arena. But there are no '80s hair bands as universally rocking as Def Leppard.

Def Leppard and Journey. 7 p.m. Friday, August 17, at the BB&T Center, 1 Panther Pkwy., Sunrise; thebbtcenter.com. Tickets cost $45.25 to $175.25 via ticketmaster.com.
KEEP NEW TIMES BROWARD-PALM BEACH FREE... Since we started New Times Broward-Palm Beach, it has been defined as the free, independent voice of South Florida, and we'd like to keep it that way. With local media under siege, it's more important than ever for us to rally support behind funding our local journalism. You can help by participating in our "I Support" program, allowing us to keep offering readers access to our incisive coverage of local news, food and culture with no paywalls.
Make a one-time donation today for as little as $1.