Gawvi Blends Faith and Faults on His Latest Album, Heathen 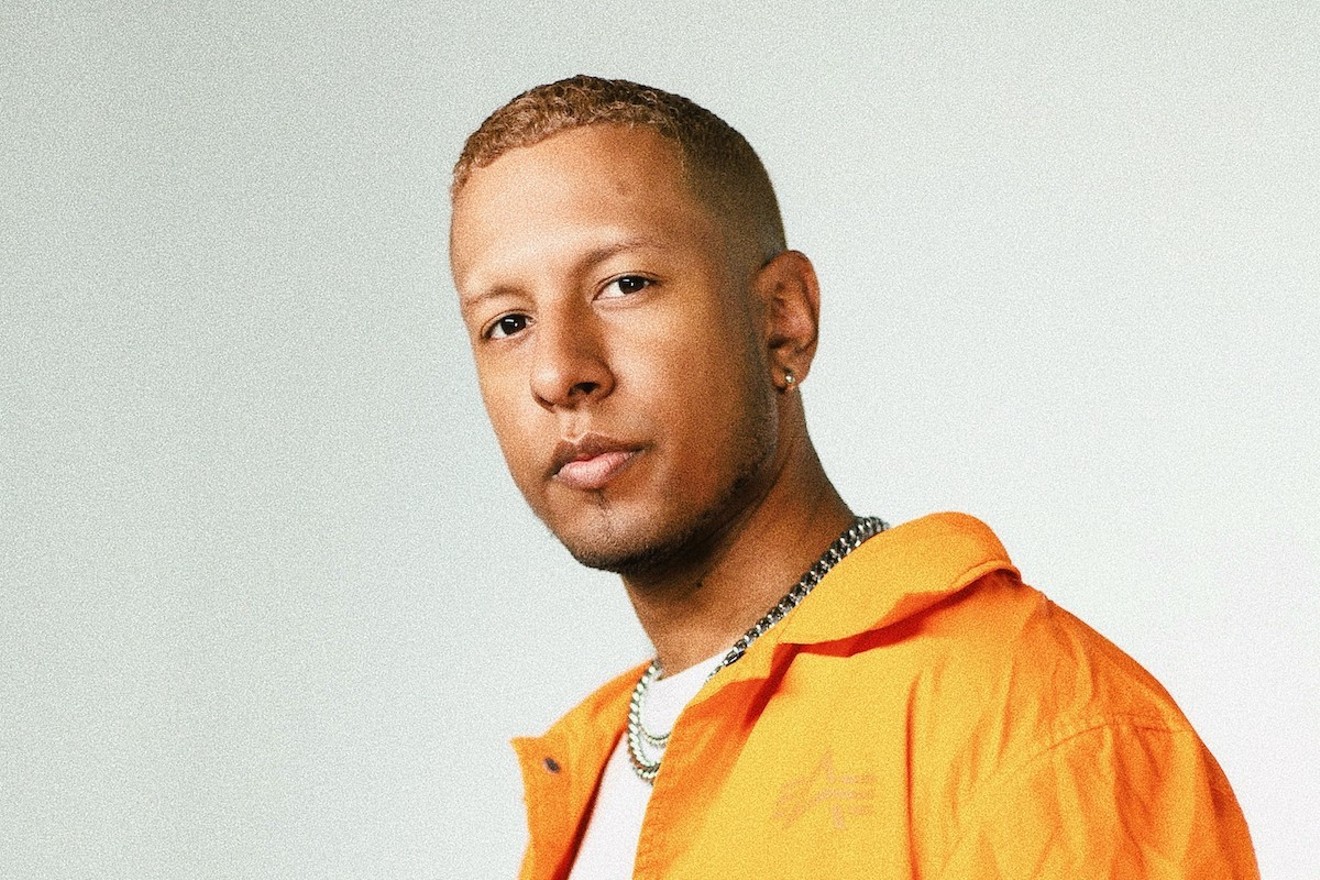 On his latest album, Gawvi challenges traditional church culture. Photo by Anler Sire
Unfurling Gawvi's identity in the form of a descriptor would yield a multihyphenate mess. Born in the Bronx and raised in South Florida, the Dominican-Salvadoran Christian artist and producer requires a plethora of prefixes by way of introduction. His faith and culture pulsate through his music and even telegraph their presence through his artist moniker — a Latin spin on his given name, Gabriel Alberto Azucena.

“'Gabe' in Spanish is actually 'Gabi,' so my family has been calling me that since I’ve been born," he tells New Times by phone. "I was like, You know what, let’s just go with that. I’ll respell it just a little bit, but it’s actually my real name."

It’s subtle choices such as those — selecting the right avatar or an album title tuned to challenge preconceptions of who’s eligible for salvation — that offer valuable insight into Gawvi's latest project. Released earlier this month, Heathen, his third studio album, interrogates the expectations with which Christian artists constantly contend. Listeners are liable to alternate between vibing to the sounds, gasping at the audacity, and prostrating themselves at the worshipful content.

“As humans, we get put in a box in many different ways. We’re always striving to understand our identity: Who are we? What is our journey? What is our destiny? Heathen embodies all of that,” the artist explains.

Gawvi credits his mother for indulging his fascination with South Florida's bass-heavy productions and Christian hip-hop alike. She encouraged him at an early age to reject labels and pursue music — an unorthodox rearing from Latino parents, he admits.

He got his foot in the industry’s door at the age of 15 when he began producing for local acts such as the Christian hip-hop trio Rhema Soul. A few years later, he landed an internship at Pharrell’s Miami recording studio, where he watched the famed producer straddle the rock-and-hip-hop-infused sound he created with N.E.R.D and the genre-bending productions he orchestrated for Colombian singer Shakira and rapper Fat Joe.

But it was his time working with Lecrae, the Grammy-winning Christian rapper and his Reach Records labelmate, that sparked his current trajectory. As an in-house producer on the label, he has been at the helm of multiple RIAA-certified Gold projects — Lecrae’s Anomaly and “You Can’t Stop Me” by Andy Mineo. His production work has also earned him six Dove Awards.

After years of observing the politics of Christian music from behind the scenes, Gawvi wanted to get some things off his chest.
“For the longest time, Christian music has been very gray. There’s a [genre] called CCM — contemporary Christian music — and for the longest time, it’s all been white people. And I noticed in gospel music it’s mostly been black people,” he says. “You start asking a lot of questions and looking at the climate of the United States. And I really knew I was a voice for Latin people.”

That revelation emerges in “Criminal,” a cut that features vocals by Daramola. Anchored by a reggaeton beat, Gawvi flavors the song about love and rejection by bouncing between Spanish and English lyrics to lament his frustration. The fast-paced “Girl” reimagines DJ Chipman’s “Beam Ahh” with a hint of pop. Florida colloquialisms abound in songs such as “Jit,” while up-tempo trap synths grace “Climate Change” — the album's single (featuring Aklesso and Wordsplayed) — and “Feed Dah Gang” (featuring Wxlf).

“Culture has definitely impacted me like crazy growing up here," Gawvi says. "When you see the culture of South Florida and the way we have these dances like the jook and the bop, there’s something that has made all these cultures connect, and we find that in music. I’ve always loved communicating that.”

And he makes no apologies for wrestling with church etiquette on the album’s intro, “Difficult”; and “Who You Gon’ Be” (which features Israel Houghton and Trip Lee), a piano-driven uproar whose lyrics call out the religious bureaucracies that castigate artists like him.

“I never want to make it seem like I’m the pioneer or Malcolm X that’s been doing this first," Gawvi says. "I think there’s just a huge movement of amazing artists out here making noise, and I hope Heathen inspires a lot of people."
KEEP NEW TIMES BROWARD-PALM BEACH FREE... Since we started New Times Broward-Palm Beach, it has been defined as the free, independent voice of South Florida, and we'd like to keep it that way. With local media under siege, it's more important than ever for us to rally support behind funding our local journalism. You can help by participating in our "I Support" program, allowing us to keep offering readers access to our incisive coverage of local news, food and culture with no paywalls.
Make a one-time donation today for as little as $1.