Rolling Loud Needed Only One Thing to Survive the Pandemic: The Fans

Top clockwise: Tariq Cherif, DJ Five Venoms, Wilson Zarzuela, and Kelvin Li Photo courtesy of Rolling Loud
On the night of March 4, 2020, Tariq Cherif was posted up at the bar inside SOB's in New York City watching DJ Scheme and Danny Towers, two acts he serves as manager for, perform. It had been a little over a month since the Rolling Loud cofounder and his team announced the lineup and ticket sales for the upcoming sixth edition of the festival in Miami.

As he sipped on his drink, a small thought crept into his head: Yo, this might be the last time we do this for a while.

In the weeks that followed, the pandemic would shut down the entire globe and kneecap the music industry. The discussions surrounding COVID-19’s impact had already been echoing throughout the U.S. for weeks after countries in Asia and Europe reported outbreaks.

Despite those reports, Rolling Loud attempted to move forward with the in-person festival scheduled to take place at the Hard Rock Stadium on May 8-10, 2020.


On a recent stormy Tuesday afternoon, the Rolling Loud team — business administrator Mack Sullivan, marketing director Kelvin Li, talent buyer and head of touring Wilson Zarzuela, and Cherif — are hanging out in the all-white studio in a nondescript building on Miami's Upper Eastside.

The conversation quickly turns to how the team managed to keep the six-year-old hip-hop festival alive during the pandemic.

“I don't think America was really thinking about it at first, but I definitely was,” Li says. “I have like 90 percent of my family in China who were already experiencing it and going through lockdowns. Chinese New Year just got canceled. So I was concerned about it because if China is going crazy about it, it's only a matter of time until it got here."

Still confident that their show would go on, the team held out for as long as possible. Meanwhile, other events like Ultra Music Festival and Calle Ocho were forced to cancel their 2020 editions. Naively, everyone thought that perhaps the lockdown would be over in a couple of weeks, if not months. 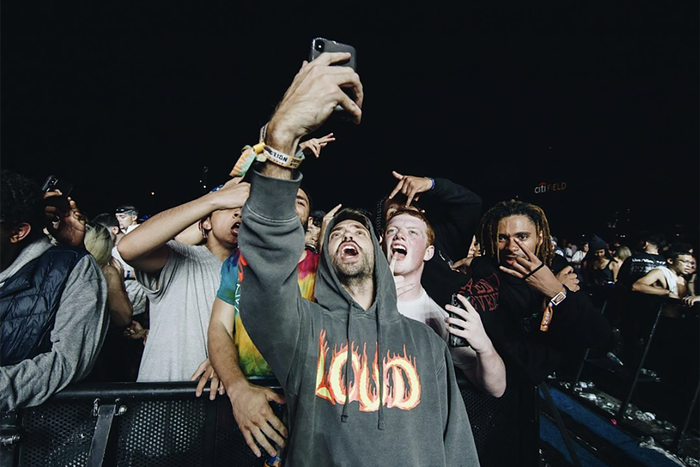 Cofounder Tariq Cherif with the crowd at Rolling Loud.
Photo courtesy of Rolling Loud
But by the end of spring, the coronavirus continued to ravage the U.S. The scheduled kickoff date of May 8, 2020, was quickly approaching as orders to stay at home continued to be enforced.

On April Fool's Day, Rolling Loud announced it was postponing the Miami event to February 2021 — and it was no joke. Planned shows in Los Angeles, New York, and Portugal were also pushed back.

"During COVID, there was a lot of this," Cherif says bluntly, pushing his phone away with such force it slides across the table and onto the floor. “It got very real. People really were dying. I know people who have died. It became a real thing, but at first there was a lot of denial. As you get through the denial and it becomes more and more real, it was like, 'Yo, we're going to have to postpone this thing.’ Then it's the reality of the refunds.”

As the demands for refunds came pouring in, the team knew it had to act, even as other festivals were encouraging fans to hang on to their tickets. Unlike other long-standing brands, Rolling Loud's fairly new status meant it didn’t have the luxury of betting on fan loyalty. Cherif and Matt Zingler, his business partner and cofounder, understood that the majority of ticketholders were young adults, most of whom had lost their jobs after businesses closed during the lockdowns.

Instead of promoting the festival, Rolling Loud provided updates to fans on social media and started processing refunds. The biggest obstacle: The money accrued from ticket sales had already been spent on production. Deposits had been remitted, and artists' fees had been on the books since 2019. It was a financial nightmare for the young brand. Still, Cherif and Zingler were determined to preserve fans’ trust.

The decision to offer refunds was made quickly, but the actual process of giving ticketholders their money back didn’t go as fast as the team wanted. The festival's social-media accounts were flooded with angry comments.

Matt Zingler (left) and Tariq Cherif
Photo by Leanne Leuterio
“When you're a founder, I take it personally," Cherif admits. "Somebody being like, ‘Yo, Rolling Loud scammed me. They're never going to give us our money back. Fuck those guys,' and I'm like. 'No, not true.' It sucks to be on either side of the refund situation, but I'm happy we were able to offer refunds. I'm proud of that."

While the refunds helped redeem the brand, the festival needed to find a way to keep the fans engaged while in-person events were on hold. Cherif asked his head of sponsorships, Alex Castaldi, to look for a platform that would help finance a slew of content, from livestreamed concerts to exclusive shows.

That’s when Twitch entered the chat.

A deal was made with the livestreaming service, which prior to the pandemic was known mainly for its streaming of gameplay, to produce six months of sponsored content. Zarzuela, who previously engaged fans via the @TeamRollingLoud account, jumped into action to lead all the programming for the partnership. The weekly schedule of exclusive programming consisted of rap-inspired shows like The Rotation, a podcast hosted by Cherif, and Got Bars? a competition to find a rising rapper to sign.

In addition to the weekly content, Rolling Loud and Twitch partnered to stage four virtual concerts.

The first show, which aired in September 2020 from an undisclosed warehouse in Miami, featured headliners Swae Lee and Ski Mask the Slump God and performers like Polo G, NLE Choppa, Pouya, and Maliibu Miitch. The two-day showdown catered to the festival's music-hungry fan base, with the stream peaking at over 4.7 million viewers. 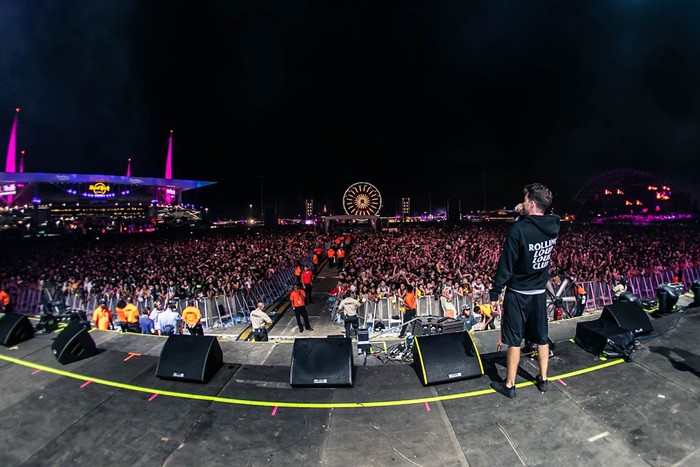 Tariq Cherif onstage at Rolling Loud.
Photo by Leanne Leuterio
“That was an incredible feeling,” Zarzuela says of the first Loud Stream. “It's sort of like you're seeing what you've worked so hard at pay off. The streams were free. We didn't put a paywall behind it. We had Pouya perform one of the days. Literally, before we went live, we had 10,000 people in the chat spamming Pouya's name. That was so cool to me!”

With the Twitch deal coming to an end earlier this year, the focus shifted to the festival’s comeback. In November, Rolling Loud announced that it would once again push the dates back to May 7-9. Then, in April, the dates shifted again, to July 23-25, after the team failed to receive the green light to proceed with the May dates.

“There was nothing else to do but to be positive about it,” Li says. “I'm glad we were able to announce things, because I feel like it gave fans hope.”

Over the years, the festival has had its ups and downs, from a legal battle with Bayfront Park in 2017 to the pandemic-forced postponements of 2020. Despite the setbacks, Rolling Loud needed only one thing to survive the pandemic: the fans. Taking the time to refund ticketholders their money and keeping engaged with fans through the Twitch deal earned the festival a bounty of goodwill. When festivalgoers flock to Hard Rock Stadium July 23-25, they'll see headliners like A$AP Rocky, Travis Scott, and Post Malone, along with the first-ever WWE SmackDown event at the festival.

“Fans can expect the world of Rolling Loud and the world of WWE colliding in ways that no one could’ve seen coming,” Zarzuela promises. “It’ll highlight how the wrestling community and the hip-hop community are really not that far from each other.”

After Miami, the L.A. and New York events are next up, along with tours for acts like Moneybagg Yo, Jack Harlow, Lil Baby, and Rod Wave.

“I think people are going to cry, laugh, and the energy is going to be very happy and grateful,” Cherif says of the festival's return. “I hope people express it positively. I know I will.”

Rolling Loud. Friday, July 23, through Sunday, July 25, at Hard Rock Stadium, 347 Don Shula Dr., Miami Gardens; 305-943-8000; hardrockstadium.com. Sold out; join the waitlist for tickets at rollingloud.com.
KEEP NEW TIMES BROWARD-PALM BEACH FREE... Since we started New Times Broward-Palm Beach, it has been defined as the free, independent voice of South Florida, and we'd like to keep it that way. With local media under siege, it's more important than ever for us to rally support behind funding our local journalism. You can help by participating in our "I Support" program, allowing us to keep offering readers access to our incisive coverage of local news, food and culture with no paywalls.
Make a one-time donation today for as little as $1.