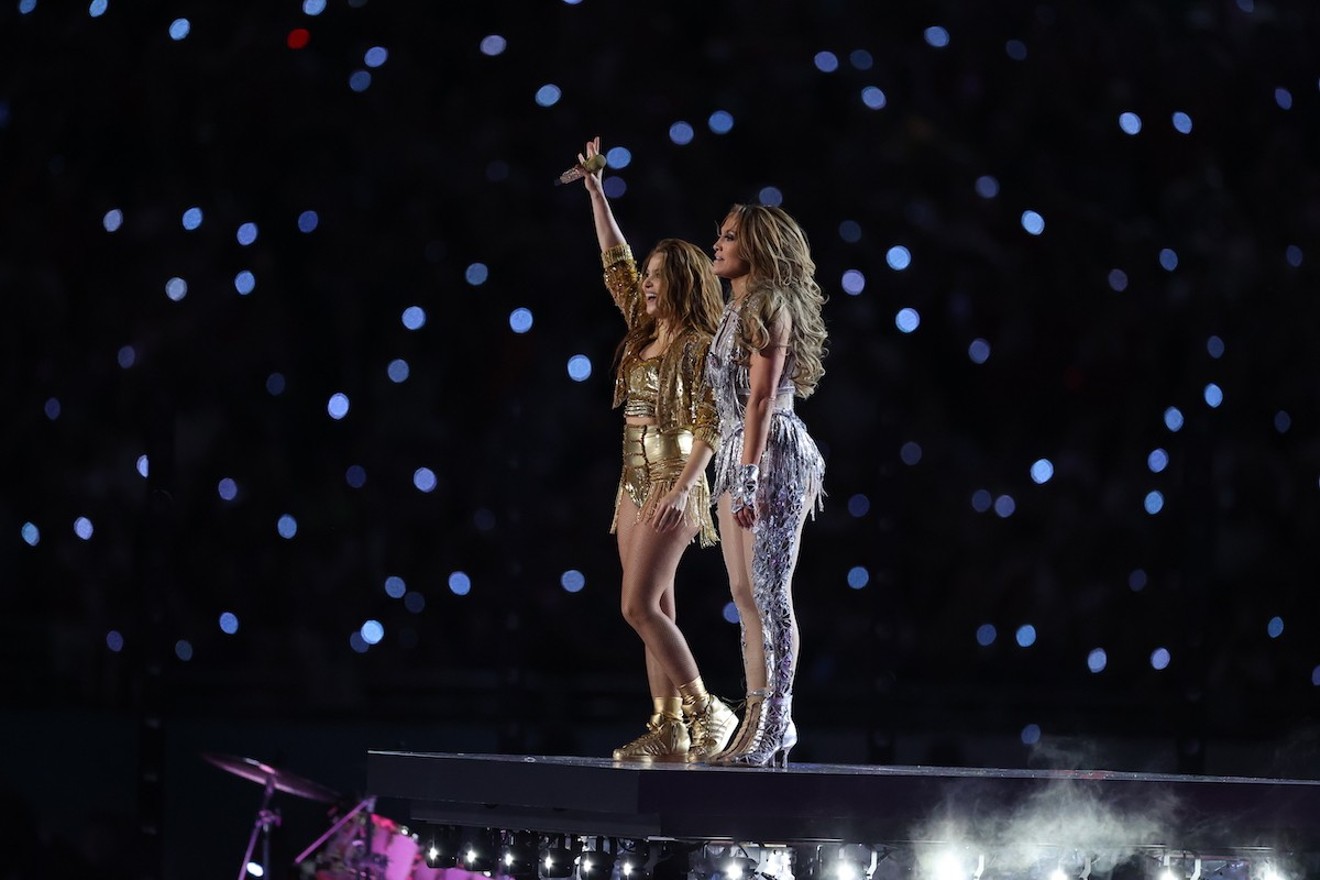 Shakira (left) and Jennifer Lopez Al Bello / Getty Images
As predicted, Jennifer Lopez and Shakira's Super Bowl halftime show in Miami proved to be a glorious celebration of Latinx music at a time when the sounds of Latin America and its diaspora have gone mainstream around the globe.

In the lead-up to show, a controversial New York Post column ignited a firestorm on Twitter after author Chuck Arnold argued that Jennifer Lopez shouldn't have been forced to share the Super Bowl stage. It turns out he was half-right: Both women commanded the stage so expertly that it raised the question: Why didn't each deserve her own solo show? A performance that was intended to showcase the talents of Latinx artists in America instead left fans wondering why these Puerto Rican and Colombian powerhouses warranted only half the time given to other headliners.

Bad Bunny joins Shakira on the Super Bowl halftime stage.
Al Bello / Getty Images
It didn't seem to bother them much, though, as Shak and J.Lo split the time with two other Latin music giants: Bad Bunny and J Balvin. The former joined Shakira to perform his feature from Cardi B's "I Like It" and a few lines from "Callaita." Wearing a glimmering red-fringed outfit that emphasized her signature hip-shaking, Shakira jumped from hits such as "She Wolf" and "Whenever, Wherever" to a salsa version of "Chantaje" and even found time for a bit of Led Zeppelin's "Kashmir," accompanying herself on electric guitar.

For Jennifer Lopez's half of the Half, the Bronx singer brought elements of her Las Vegas residency to the Super Bowl stage one night after Lady Gaga did the same at Watson Island's Meridian Island Gardens. Through burlesque numbers, pole dancing, and kinetic salsa numbers, J. Lo trekked through her hits from the 2000s before being joined onstage by J Balvin for "Que Calor" and "Mi Gente."

One poignant moment came when Lopez wrapped herself in the Puerto Rican flag while surrounded by children singing "Born in the U.S.A."

Jennifer Lopez brought elements of her Vegas residency to the Super Bowl halftime show.
Elsa / Getty Images
Miami fans are likely to be disappointed that no hometown talent made it onto the stage. One of those who voiced disappointment was U.S. Sen. Rick Scott, who took to Twitter shortly after the performance wrapped with the two singers joining forces on Lopez's "Let's Get Loud" and Shakira's "Waka Waka."

"Great halftime show from @JLo and @Shakira. But no @Pitbull? America was robbed," Scott tweeted.

On the whole, the show suffered from rushed pacing — it felt akin to a relay for showcasing all of the talents each woman possesses within the allotted time. But if the biggest complaint about the halftime show is that it left the audience wanting more, these two pop powerhouses ultimately made the most of their 15 minutes on the world's most visible concert stage.
KEEP NEW TIMES BROWARD-PALM BEACH FREE... Since we started New Times Broward-Palm Beach, it has been defined as the free, independent voice of South Florida, and we'd like to keep it that way. With local media under siege, it's more important than ever for us to rally support behind funding our local journalism. You can help by participating in our "I Support" program, allowing us to keep offering readers access to our incisive coverage of local news, food and culture with no paywalls.
Make a one-time donation today for as little as $1.