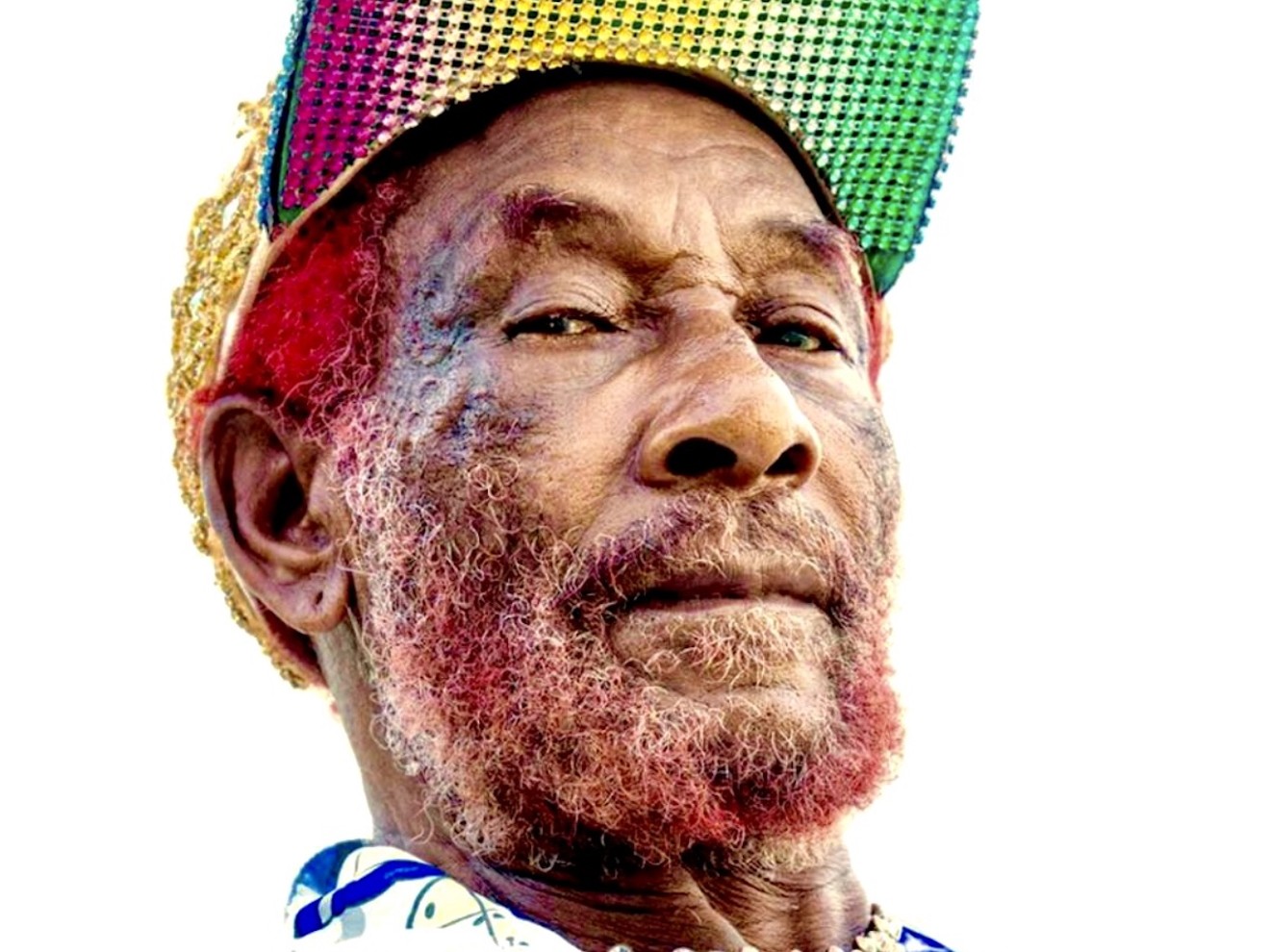 Lee "Scratch" Perry Photo by Frank Spinelli
Monsters and demons will crumble at the feet of the great King Scratch. He’s timeless and will live forever — the spirit of this lion king is a revolution that cannot be slowed or halted. Lee “Scratch” Perry is one of the most influential rulers of reggae and dub and will forever go down as King Scratch ruler among all.

Scratch may be in his 80s, but that soul is still thriving. 2019 was a prolific year for the conqueror, with the release of five albums — he may be 83, but his stories keep coming. His latest album, Heavy Rain, features Brian Eno on “Here Comes the Warm Dreads” and like the entire album, the music shows Perry’s eclectic and forward-thinking nature. As a producer, he’s been a beacon of truth for record producers the world over. His use of distortion and synths, along with all the other foreign and at times inorganic elements he is known to drop into his music, is something even those floating in some otherworldly plain in their mind's eye can’t reach. Scratch is truly a being from another realm that hasn’t quite used up all the life force of his host body yet. The use of horns on the track “Rattling Bones and Crowns” off Heavy Rain, mixed with the reverberation of percussion, with Scratch playing maestro and emcee, is another example of his ability to hear what is needed when no one else can.

I’m not sure how many records Perry has made, but he may be one of the most productive artists you will find that has sustained a strong and creative career. To dig into all the music this god has had his hands in, you will find yourself not having time to go to work and you would probably neglect your duties as a spouse and a parent. And forget it — you listen to enough King Scratch as a kid, you aren’t gonna want to go to school anymore. Especially when you can learn all you will ever need in this world from Perry. With the Sensibles. 7:30 p.m. Saturday, February 15 at Culture Room, 3045 N. Federal Hwy., Fort Lauderdale; 954-564-1074; cultureroom.net. Tickets are $25 via ticketmaster.com.

There is something thrilling about finding a band that can do just about anything, not allowing genres or norms to keep them in line. If you ask me, that should be a prerequisite for any artist that finds themselves in the hall of fame of music. The Main Squeeze is a band of that ilk. They can just do the damn thing. Lead singer Corey Frye’s soulful and thematic voice seemingly has no limits. The band itself is full of musical wizards hell-bent on putting a hex on all of us. They’ve released several albums since they got their start in Bloomfield, Indiana. Their last, Without a Sound, came out in 2017, and they have been touring the country giving people the holy sacrament when they get on stage. The Main Squeeze dropped the single “Fancy Clothes” in 2019 that we hope is a precursor to their next album dropping soon. The funk is in them with “Fancy Clothes” — the synths, the cadence, it’s just a funky damn record. With Honey Hounds. 7 p.m., Friday, February 14 at Revolution Live, 100 SW Third Ave., Fort Lauderdale; 954-449-1025; jointherevolution.net. Tickets are $15 via ticketmaster.com.

I’ve had my heart broken several times in my life and nothing as of late has brought back that sadness or at least the idea of it like Have Mercy has. Their latest album, The Love Life, is tough and gentle and quiet and rowdy all at the same time. The opening track, “We Ain’t Got Love,” starts smooth and the end has built up that longing in their percussion that has me remembering how much I fucked up with that dancer from New Mexico. I’m telling you, she was crazy about me, and I couldn’t see it. Plus she had a cat — I hate cats. There are moments on The Love Life that have touches of Brit Pop in the musicianship, and then I exhale and I hear pop-punk roots. Plus frontman Brian Swindle has a bit of ‘90s alternative/grunge to how he delivers this heartbreaking music. The track “Clair” reminds me of all these things. With Fredo Disco, Selfish Things, and Young Culture. 5 p.m., Friday, February 14 at Respectable Street, 518 Clematis St., West Palm Beach; 561-832-9999; sub-culture.org/respectable-street. Tickets are $17 via etix.com.

Sometimes I miss Austin, that strange city that, although quickly morphing into a dystopian tech nightmare, still had some of the greatest folk and country singers just playing randomly on street corners and in barns and at gin joints all over. River Tramps gives me that feeling. There’s a harmony between the two that really just reminds me of that big Texas sky. Plus they look like eastsiders living in a rusted-out mobile home they converted into a symposium of lunacy to set the mood for their exciting brand of folk. There isn’t a whole lot to be found online that River Tramps have put out, but from what I was able to unearth, they are on their way with records like “Leavin’ It Up To You” and “Upper.” 8 p.m. Friday, February 14, the Brewhouse Gallery, 720 Park Ave., Lake Park; 561-469-8930; TheBrewhouseGallery on Facebook. Admission is free.

Instead of ending this review peacefully, I’ma slam dance my way out — and Iron Buddha’s “Witch Burial/Lonetoker,” off their latest album, Old Hex, is the soundtrack. I can’t be expected to make rational decisions any longer — this world and this past week have eaten me alive, and I’m pretty sure the Democratic party is to blame. Listening to a band like Iron Buddha, you feel like you might just be able to pull off another week of life. That stoner doom metal is nasty and chugs along like a grunge punk smoking his cigarette all the way to it’s filter. Iron Buddha will be playing Aces High Music Fest: A Benefit for Vinny G — check out the GoFundMe page here for Vinny Gee, who’s recovering from another of the many surgeries he’s facing after a car creamed him on his motorcycle this past December. With Old Habit, Nemesis, and more. 8 p.m., Saturday, February 15 at Respectable Street, 518 Clematis St., West Palm Beach; 561-832-9999; sub-culture.org/respectable-street. $10 donation at the door.
KEEP NEW TIMES BROWARD-PALM BEACH FREE... Since we started New Times Broward-Palm Beach, it has been defined as the free, independent voice of South Florida, and we'd like to keep it that way. With local media under siege, it's more important than ever for us to rally support behind funding our local journalism. You can help by participating in our "I Support" program, allowing us to keep offering readers access to our incisive coverage of local news, food and culture with no paywalls.
Make a one-time donation today for as little as $1.