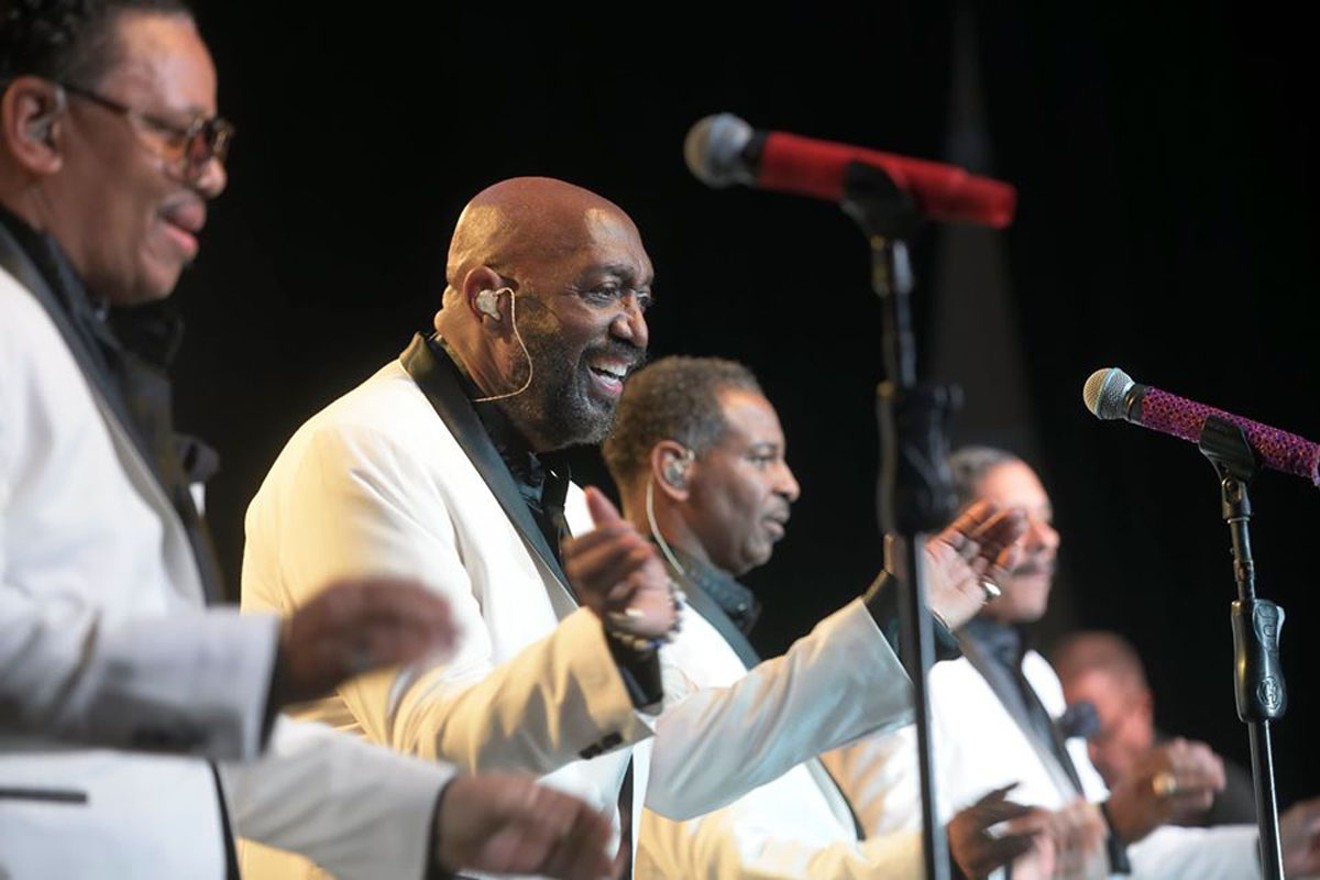 The Temptations are bringing their 60th anniversary tour to Coconut Creek on Thursday. Photo courtesy of the Temptations
The Temptations have been the soundtrack to me getting laid so many times in my 20s that I really can’t stress enough how important this group is to me. And forget it, I Wish It Would Rain was on repeat for a month after this hippy chick from Wisconsin broke my heart back in Chicago. Honestly, if you haven’t heard the Temptations before, you suck, and probably shouldn’t be allowed to vote.

It’s hard to say who or which is the greatest artist/group to come out of Motown Records, but the Temptations are on that list. And that’s saying something — the Jackson 5 were on Motown, Marvin Gaye is from Motown, Stevie Wonder, and the motherfucking Supremes. Let’s just say, it’s just about everyone that matters.

The Temptations' vocal harmonizing is second to none and the range that they kept within their group was spectacular. Songs like "Get Ready" and "Just My Imagination (Running Away with Me)" are perfect examples of the myriad ways they harmonized on records. They began their harmonizing journey in 1960 under the name the Elgins, which, thank Christ they changed their name. The Motor City birthed the Temptations, but they hail mostly from Alabama, choosing to leave their homes for "the once great shining city upon the hill."  Their work ethic was meticulous and so were their performances. Presenting the crowd with a perfect show was their calling card.

The Temptations have influenced R&B groups for decades while managing to still produce hits. They were pioneers of the psychedelic soul sound, starting with their hit record Cloud Nine in 1968, and I mean, "Psychedelic Shack," which is about doing LSD at some hippie spot, throws the whole idea of the Temptations being a love song machine out the window. You can hear the early rise of funk and the future for artists like George Clinton and Sly and the Family Stone being mapped out.

If the Temptations hadn’t stepped into the spotlight, we would never have Boyz to Men or Jagged Edge or 112. Thank you, Motown, for giving us the greatest baby-making music the world will ever hear. With the Four Tops. 8 p.m. Thursday, January 23 at Seminole Casino Coconut Creek, 550 NW 40th St., Coconut Creek; 954-977-6700; seminolecoconutcreekcasino.com. Tickets start at $129.

Well, Henry Rollins may not be in Black Flag any longer, but that isn’t going to stop punk kids from kicking the shit out of each other and it shouldn’t because Black Flag dropped an album in 2013 titled What The… and they are still righteous as ever. It’s the first album they have released since 1985’s In My Head and they are still ripping society to shreds with their anarchy.

Their 1981 album Damaged — perhaps the most important album in the band's catalog — is a call to rebellion, and punching people in the face, and it helped shape the hardcore scene of the 1980s that took over where classic punk acts like the Clash and the Ramones left off. The music got faster and became a more idyllic vision of what punk can be, in the loudest and most aggressive way possible.

The legendary frontman of Black Flag and cult icon Henry Rollins may no longer be leading the band into battle, but the soul of Black Flag is unwavering in the face of fascism. With the Linecutters. 8 p.m. Thursday, January 23 at Propaganda, 6 S. J St., Lake Worth; 561-547-7273; propagandalw.com. Tickets are $30 in advance via etix.com.

There is a long history of Canadians playing music that is influenced heavily by America’s southern musical roots. Okay, mostly Neil Young, but that’s a pretty goddamn big name. But with the Dead South, we are looking at a group that has commandeered the sounds of Appalachia and turned it up to 11. This bluegrass folk group and their harmonizing makes you think of Jack White in the movie Cold Mountain. Their music takes us on a voyage through the mountains while soaked in moonshine and playing a jig that is sure to cause someone to fight. Their latest album, Sugar & Joy, is a raucous party around a lonely campfire just off the Appalachian Trail and we are loving it. With the Hooten Hallers and Danny Oliver. 7 p.m. Thursday, January 23 at Revolution, 100 SW Third Ave., Fort Lauderdale; 954-449-1025; jointherevolution.net. Tickets start at $21 via ticketmaster.com.

Antibalas gives me the urge to run away from home and go dance with the old gods under the stars ... or, at the very least, they make me say things like "old gods" and want to listen to more afrobeat in my everyday life. If you are looking for a truly unique collective of people making otherworldly music, then come forth and sacrifice yourself on the altar of Antibalas. So many different musical ideas are being pulled together with this band that it is simply impossible to put them in any singular genre of music. It’s worldly, it’s funky, it's psychedelic, it’s fucking out there. Powered by the soul of '70s musical sorcerer Fela Kuti, lead singer and frontman Duke Amayo doesn’t let you down with his spirituality and grace as he shifts gears along with the band with complete ease. It’s tragic and wonderful there aren’t more bands like Antibalas. They have captured something out in the far reaches of space and it can’t be contained, because the world needs them. Check out their album Where the Gods Are in Peace — before their new album, Fu Chronicles, is released in February — to experience what two decades of making surreal vibes feels like. With Scone Cash Players. 7 p.m. Friday, January 24 at ArtsPark at Young Circle, 1 N. Young Cir., Hollywood; 954-921-3500; hollywoodfl.org. Free admission.

In case you thought the age of post-punk had died, here is Astari Nite, a bold look at what romantic-in-black looks like. They have been releasing sad, sad music since 2011 and hopefully they never stop. Whenever I listen to goth or new wave or post-punk or whatever name you want to call it, it reminds me of Germans dancing in a basement discotheque in Berlin. Night becomes day and then becomes night again and those inside haven’t stopped moving. I highly recommend Astari Nite’s 2018 album Midnight Conversations and take note of the influence of Joy Division in their music. It’s a great day to be alive, there is no end to the interesting and original music you can find today. And Astari Nite is no exception. With DJ Mous and DJ Carlos Menendez. 10 p.m. Friday, January 24 at Respectable Street, 518 Clematis St., West Palm Beach; 561-832-9999; sub-culture.org/respectable-street. Tickets cost $10 at the door or $5 via eventbrite.com.
KEEP NEW TIMES BROWARD-PALM BEACH FREE... Since we started New Times Broward-Palm Beach, it has been defined as the free, independent voice of South Florida, and we'd like to keep it that way. With local media under siege, it's more important than ever for us to rally support behind funding our local journalism. You can help by participating in our "I Support" program, allowing us to keep offering readers access to our incisive coverage of local news, food and culture with no paywalls.
Make a one-time donation today for as little as $1.