Bad Bunny Taught Me Spanish and How to Be a Miamian 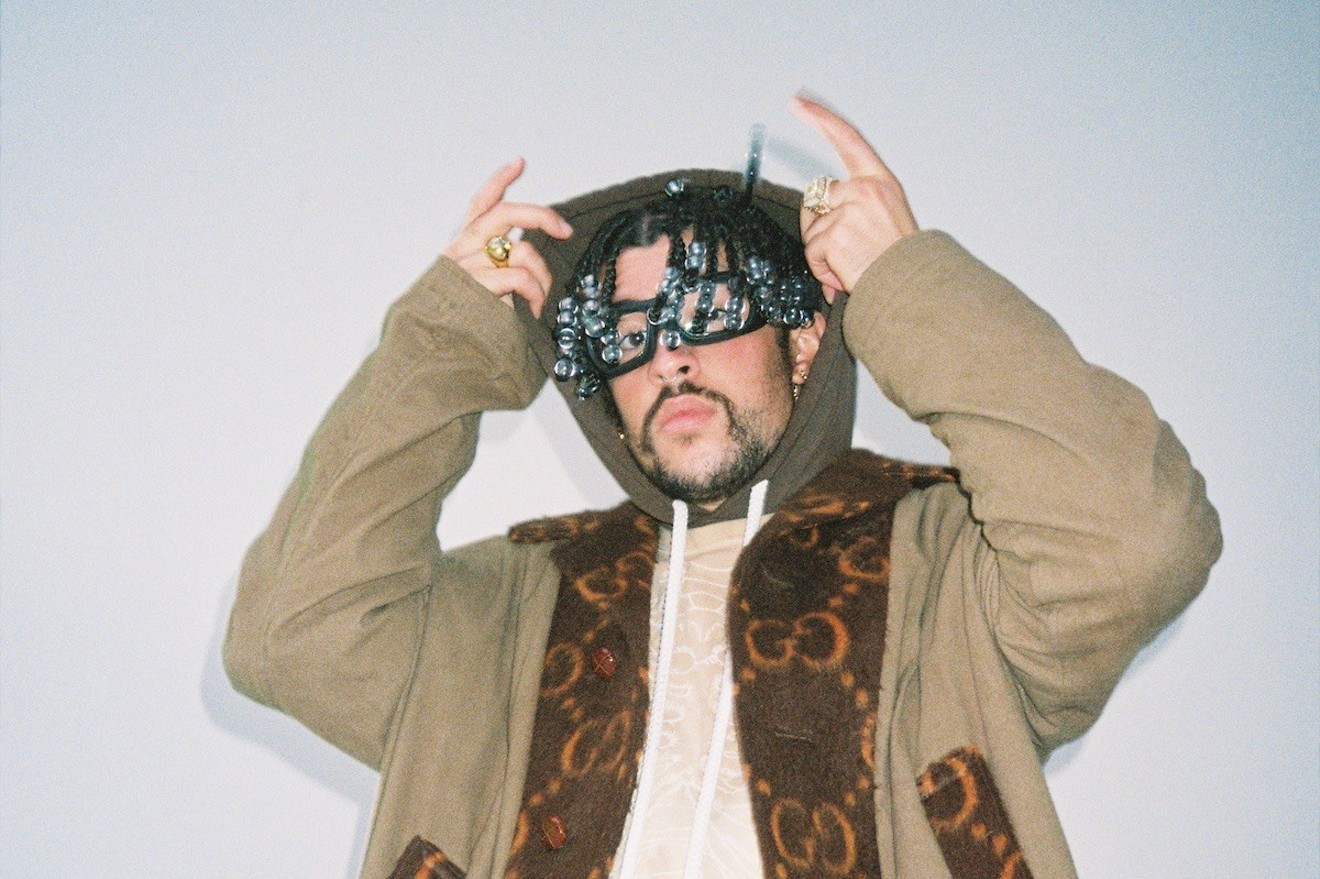 Bad Bunny Photo by Stillz
Even the most gringo of Miami gringos knows precisely when to shout "culo fenomenal" if "Dákiti" comes on in a club. The slightly more cultured ones sometimes join in on "si tu novio no te mama el culo, pa' eso que no mame" in "Safaera," too. But when I — a redhead with freckles and green eyes — am spotted by local Latinos spitting full verses of Bad Bunny songs in perfect rhythm to the DJ, I know it's sort of surprising.

Besides teaching me how to say "ass" in Spanish, Bad Bunny has molded my musical taste and, in doing so, inspired me to embrace a language and culture that isn't my own.

Though I feel like I've watched Benito Antonio Martínez Ocasio grow from stardom to global phenomenon, I won't claim to have been there from the start. Before moving to Miami in 2019, Bad Bunny wasn't on my radar.

With a ton of family in Miami and extended members from Cuba, Peru, and Spain, I felt a tangible albeit distant connection to Latin culture growing up in Vero Beach. My initial interest in learning Spanish was sparked by the music of the late Selena when my eighth-grade language teacher made our class watch the  biopic starring Jennifer Lopez (I cried into my desk) and memorize the lyrics of "Como La Flor" as a quiz. Neither felt like schoolwork to me.

But as I started college several years and levels of high school Spanish classes later, my speaking skills were lacking. At that point, probably like many Americans, the only time I'd heard Bad Bunny was when "I Like It" with him, Cardi B, and J Balvin topped charts in 2018.

That changed when I went to an orientation program at the University of Miami in July 2019. It was a weekend of activities specifically for commuter and transfer students, most of whom were Miami locals and Cuban-Americans.

It was from them — playing reggaeton as background music from our first icebreaker activity to the DJ party on the last day — I learned that perreo and Bad Bunny were lesson one of my 305 Survival Guide. "Te Boté" and "Soy Peor" were fundamentals, corporate lingo in the business of Miami, terms I just needed to know to survive.

And then I was hooked.

I immediately made a new playlist entitled "ALatinx" — the "A" there to force my phone to push it to the top of the alphabetical list, above all other playlists. It would have taken too long to scroll down to access the music. It had highlights from El Conejo Malo's X 100pre and Oasis albums, plus other artists like J Balvin, Anuel AA, and Ozuna I'd discovered.

Reggaeton — and Bad Bunny's in particular — became like the soundtrack of my life as I moved and adjusted to Miami.

It was a bonding topic with my roommate, an international student from Ecuador, who also loved his music. When I saw him live for the first time in 2019 at Viva Latino! at FTX Arena, I lost my voice from screlting. I blasted "Callaíta" in the shower at my dorm — it made me feel like a main character in a coming-of-age montage, thriving in my new Miami life despite the gross communal bathrooms and chaos of college life surrounding me.

As I developed a stronger connection to the music, it became more than memorizing words to sing along with. I wanted to relate my new favorite artists in their work. And much like with Selena years earlier, just listening to reggaeton taught me things about the language I never would've learned from a textbook or classroom. Knowing and understanding what the lyrics meant made me feel more connected to the rich culture of the city I now called home.

To describe Bad Bunny's cross-cultural influence through my own experience is one thing. But I'm not unique in this experience. I know many non-Spanish speakers who have Bad Bunny in their Spotify Wrapped each year and "YHLQMDLG" tattooed on their bodies.

Collin Miller, a University of Miami student from New Jersey, said he had never listened to Latin music (besides "Feliz Navidad") before discovering Bad Bunny from friends when he moved here.

"I'm still learning the lyrics," Miller says. "But honestly, it didn't matter to me. It was more the feeling of the music and the times I spent with friends listening to it. He has such an ability to move people. I always want to dance when I hear him."

"I think he's so popular because of his unique style and good beats," says Karan Prasad, a UM student from India who'd never heard reggaeton before listening to the YHLQMDLG album. "I also think he's just a really good person."

His music is undeniably anthemic — to this day, it's the only genre that gets me through a workout. And I can't think of another artist who is played more in Miami clubs. But it's more than that. His music is clever and diverse.

Sometimes he flaunts his fame and fortune ("Está Cabrón Ser Yo") but other times he gets sentimental ("Si Veo a Tu Mamá"). On his most recent album, El Último Tour del Mundo, he incorporated rock sounds ("Yo Visto Así") with serenades ("Ante Que Se Acabe") and even traditional boleros ("Cantares de Navidad") while never abandoning his trap mastery ("Booker T").

His personal style has always been original, too. For one, he wore masks before a global pandemic made them fashionable. And unlike pretty much any mainstream reggatonero before him, Bad Bunny often embraces gender-bending, going in full drag for his "Yo Perreo Sola" music video and regularly sporting heavy jewelry, skirts, and manicures.

From 2018 to 2022, about the same period I've been in college, he has gone from releasing his first album to selling out stadiums around the world. (I spent more money on tickets to El Ultimo Tour del Mundo than I care to admit on the internet.)

Even though he seems like an overnight success to fans like me, such is hardly ever the case with artists. Like many musicians, he got his start on SoundCloud in 2013. While he attended college and bagged groceries in his hometown of Vega Baja, Puerto Rico, "Diles" got him signed to the label Hear This Music. In 2016, he released his first breakthrough song, "Soy Peor," and soon began working with established artists like Farukko and Karol G. The rest — between a guest Super Bowl performance, Grammy awards, and five top-charting albums — is history.

Other Latin artists have successfully crossed the barriers of different lingual music markets (Shakira's hips absolutely do not lie). But unlike others before him, Bad Bunny hasn't had to record a single song in English to do it. And despite the retirement rumors, I'm sure that in ten years, Bad Bunny will be an even bigger global phenomenon than he is today. He will be the one to have done it, to make music so popular that regardless of whether you understand the words, you're going to listen.

Bad Bunny. 8 p.m. Friday, April 1, Saturday, April 2, and Sunday, April 3, at FTX Arena, 601 Biscayne Blvd., Miami; 786-777-1000; ftxarena.com. Tickets cost $61 to $231 via ticketmaster.com.
KEEP NEW TIMES BROWARD-PALM BEACH FREE... Since we started New Times Broward-Palm Beach, it has been defined as the free, independent voice of South Florida, and we'd like to keep it that way. With local media under siege, it's more important than ever for us to rally support behind funding our local journalism. You can help by participating in our "I Support" program, allowing us to keep offering readers access to our incisive coverage of local news, food and culture with no paywalls.
Make a one-time donation today for as little as $1.