Rainbow Kitten Surprise Is Not for Your Kid's Gift List 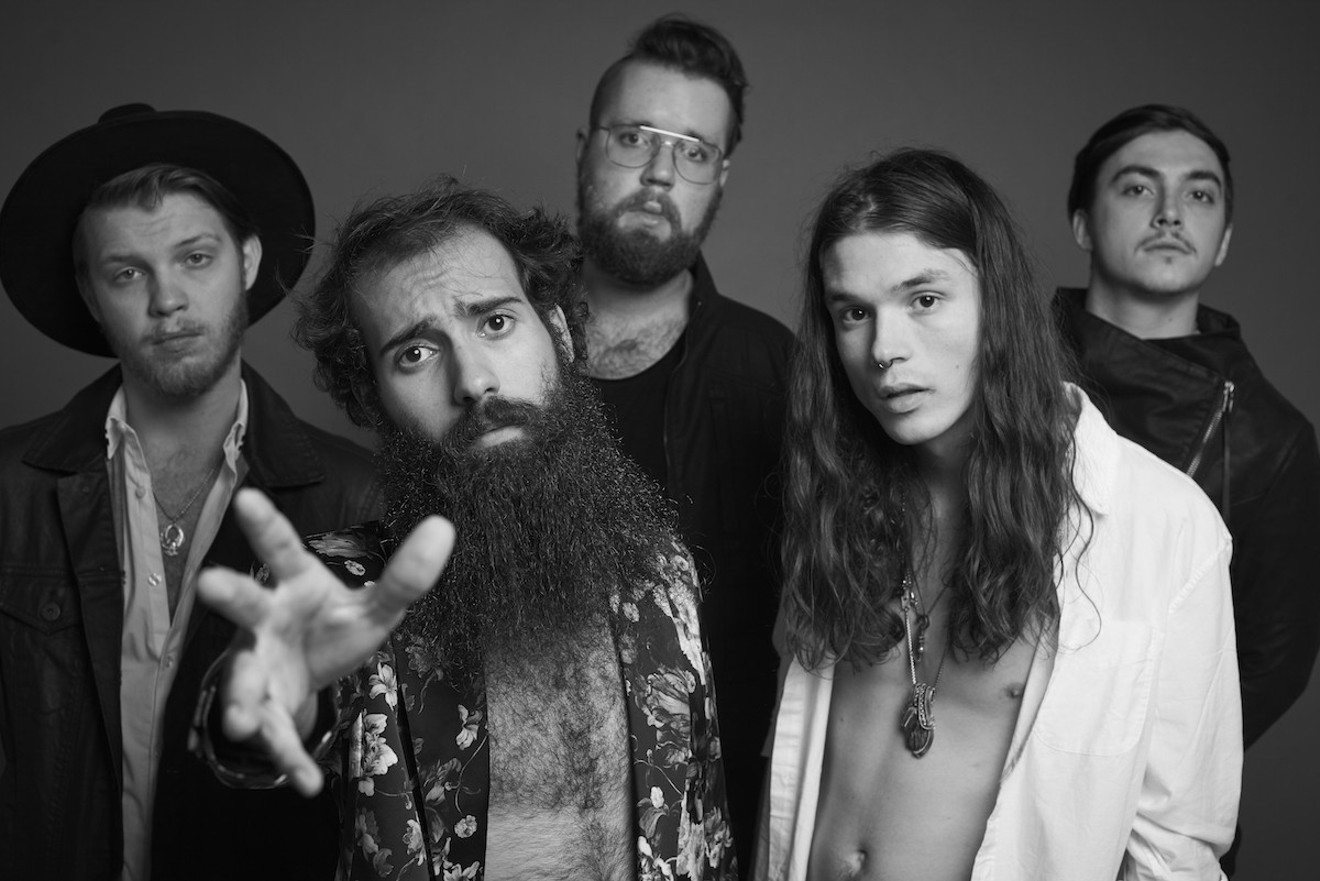 Sam Melo (second from left) and the rest of Rainbow Kitten Surprise are set to perform at Revolution. Photo by Matthew Salacuse
Rainbow Kitten Surprise might sound like something on your child’s Christmas wish list. But it's not. The latest band to hit the indie scene boasts a tour de force of high-energy shows and mystic lyrics. They hail from the mountains of Boone, North Carolina.

After a friend of the band who was being treated for bacterial meningitis came up with the name — while in a heavily medicated state — the group became Rainbow Kitten Surprise, which is now composed of Sam Melo on lead vocals, Darrick "Bozzy" Keller on guitar, Ethan Goodpaster on lead guitar, Charlie Holt on bass, and Jess Haney on drums. Starting out in local restaurants and now playing big-name festivals such as South by Southwest and Austin City Limits, this group has become a sensation.

The band’s quick rise to fame is proof of its ability to captivate and connect. They've developed not only a strong fan base but also national recognition for their musical style and lyrics. During its rise to fame, Rainbow Kitten Surprise has appeared on VH1’s Make a Band Famous, which put it smack in the middle of the spotlight.

“You used to show up to shows and can almost be guaranteed to find someone that you knew or you had met at a previous show at 75 percent of the shows," Melo says. "And now it’s a little overwhelming just in the sheer amount of the faces that you meet and the names... It changes in every city. It’s reassuring to know that that many people are coming out to see you do what you do.”

The group has masterfully blended bits and pieces of musical influences — ranging from Schoolboy Q and Frank Ocean to indie-rock bands — to create its unique and unpredictable sound. On the band's latest album, How To: Friend, Love, Freefall, each song takes listeners on a journey through various genres — from rap to old-school rock with tight melodic harmonies. You might not know what you’ll get, but you are guaranteed to groove to the beat.

Asked about the band's sound, Melo says he draws influences from his past growing up in the Dominican Republic and his time as a dancer. He describes the development of the band’s changing sound from its beginning to now as "a consciousness of movement in the music... this inability to kind of lock the same thing for too long in a song... keep it moving... You get to a new place and then just revel in it as much as possible, and then on to the next one.”

The band’s stop at Revolution Live on the Friend, Love, Freefall Tour marks Rainbow Kitten Surprise's first South Florida performance. According to Melo, the musicians are looking forward to some “great Cuban food” during their time here.

As for what listeners can expect from the band in the future: "We’ll still be making music, still be able to not keep a genre any longer than probably 30 seconds in a song, and still evolve. And I speak for myself and hopefully everyone else when I say, when you come see us at a show, you see five people on a stage that enjoy doing what they do, and you’ll see that mirrored in everybody else on this project.”

Rainbow Kitten Surprise. With Sun Seeker. 7 p.m. Wednesday, September 19, at Revolution Live, 100 SW Third Ave., Fort Lauderdale; 954-449-1025; jointherevolution.net. Tickets cost $22.50 via ticketmaster.com and will be available at the door.
KEEP NEW TIMES BROWARD-PALM BEACH FREE... Since we started New Times Broward-Palm Beach, it has been defined as the free, independent voice of South Florida, and we'd like to keep it that way. With local media under siege, it's more important than ever for us to rally support behind funding our local journalism. You can help by participating in our "I Support" program, allowing us to keep offering readers access to our incisive coverage of local news, food and culture with no paywalls.
Make a one-time donation today for as little as $1.