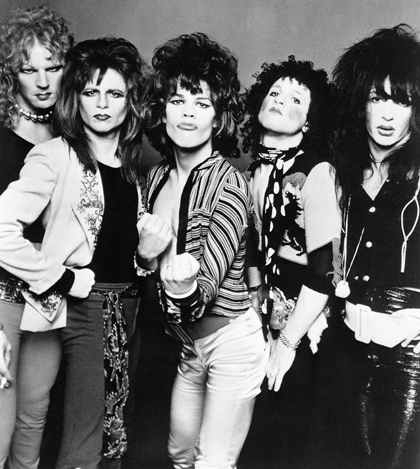 So, in just a few hours I'm off to an opening party for Dr. Feelgood's, a new bar in West Palm Beach co-owned by Vince Neil... Of course, of Motley Crue fame. I'm a big fan of debauchery on nights it shouldn't technically happen -- like Tuesday -- so I'm stoked while I wait for the minutes to tick by. My tongue is only a little stuck in my cheek right now.

Anyways, it got me to thinking about Motley Crue, and American hair metal in general. The Crue might have been great and all, but let's revisit the band where they got their initial shtick: the inimitable New York Dolls. (Hey, read The Dirt, they freely admit it!!).

And they took the Brit glam stuff, and roughed it and dirtied it up, American style. They would become one of the biggest influences on the later Sunset Strip look, which many people in the States erroneously refer to as "glam rock." ("Glam metal" I will accept, in that the imagery, if not the music, cribbed a lot from the former).

So, I'll leave you with a few choice cuts from the Dolls. If you were lucky, you saw 'em play for free on the beach during Art Basel Miami Beach's 2005 edition. (I was doubly lucky in that I got to catch one of their dates at Manhattan's Irving Plaza earlier that year -- rowdy and amazing. I almost got punched out in the pit area near the stage by a lady about 20 years my senior who wielded a serious Queens accent, a perm, and acrylics to be reckoned with.).