After high school, Jeff Garcia enrolled at Creighton University in Omaha, a Jesuit school like Belen. But he wouldn't graduate until December 2002, according to the school, when he received a degree in marketing. Not that he needed it -- by then he had already earned a reputation as a brilliant Democratic strategist who had directed the congressional campaign of Miami Beach Democrat Elaine Bloom, among others. "He was the smartest guy in politics," Joe Garcia says. "At least I thought."

In 2008, Jeff Garcia ran a campaign for former Hialeah mayor Raul Martinez against Lincoln Diaz-Balart in the 21st district, which included the west Miami suburbs. It was actually Jeff Garcia, Martinez tells New Times, who persuaded Martinez to enter the race. And once Martinez jumped in, Jeff took the lead. "Very honest," Martinez says. "Very smart."

But it was during that campaign that Jeff got his first real taste of -- and perhaps for -- South Florida corrupt politics. After numerous reports that absentee-ballot fraud was being committed by the Diaz-Balart campaign, at one point Jeff actually hid inside an 84-year-old voter's home with a video camera to try to confirm the cheating in action. It didn't work, but he and Martinez were still convinced their campaign had fallen victim to fraud.

"It is disturbing," Jeff Garcia said then, "that in a win-at-any-cost election, the congressman's campaign may be resorting to breaking the law."

Martinez lost. So did Joe Garcia, who was challenging Lincoln Diaz-Balart's little brother, Mario. Joe then served briefly in the Obama administration, in a Department of Energy position, but resigned in April 2010 to make another run at Congress, this time with Jeff as campaign manager. Joe's opponent was Rivera, a hardliner who painted Joe Garcia as a Castro sympathizer. And when Joe announced he was holding a fundraising brunch in Hialeah with then-Democratic House Majority Leader Nancy Pelosi, Jeff had to defend his candidate against charges of consorting with an unpopular Washington insider.

"Only a fool would deny his friendship with people," he said.

It was a curious choice of words.

Less than two weeks earlier, it had been disclosed that a third candidate in the race, ostensibly from the Florida Tea Party, was actually an old friend of Jeffrey Garcia's. Jose "Roly" Arrojo, who had played high-school basketball with Jeff at Belen and later partnered with the campaign consultant in a real estate management company, had suspiciously filed his candidacy as a Democrat before switching to the Tea Party. Arrojo also failed to file campaign finance reports, had no website, and sent out mailers attacking Rivera as a "liberal taxpayer nightmare."

It didn't matter. Rivera beat Garcia by nine points. But two years later, Joe ran a third time. The district had been redrawn to include all of the more Democratic-leaning Monroe County, and by then Rivera was drowning in scandal: In April, one investigation found he had used a labyrinth of credit cards, campaign records, and dubious loans to live lavishly off political contributions; another questioned whether he had a secret $700,000 consulting contract with Flagler Dog Track while he was serving in the Florida House; and sources had already revealed him to have connections to another suspected phony candidate from the same year's Democratic congressional primary, Justin Lamar Sternad.

"I don't know what goes through his mind," Joe Garcia told a Washington Post reporter three weeks before the election. "But he's a guy facing a really ugly future."

Garcia won by six points. But on February 23, 2013, less than two months after he got to Washington, the Miami Herald reported that in the previous year's primary election, more than 2,500 requests for absentee ballots had been sent by people who hadn't actually requested them, a clear case of ballot fraud. Three months later, on May 31, federal investigators raided the homes of John Estes -- Joe Garcia's 2012 campaign manager -- and a cousin of Giancarlo Sopo, Garcia's communications director.

"It is painful to watch a friend go through this, but it must be noted that no ballots were touched or manipulated in any way."

Jeffrey Garcia immediately copped to orchestrating the scheme. Joe fired him and denied any knowledge of the plot. "This is something that hit me from left field," Joe Garcia said. "Until today, I had no earthly idea this was going on."

Jeff's fall from grace was swift. Four months later, in September 2013, an FBI investigation was launched into whether he had funded the suspicious Arrojo candidacy. The next month, Jeffrey Garcia was in handcuffs, being led into jail after agreeing to a 90-day sentence as part of a plea deal for the absentee-ballot fraud.

"It is painful to watch a friend go through this," Joe Garcia said. "[But] it must be noted that while these actions were wrong, no ballots were touched or manipulated in any way."

In Congress, Garcia has been an engaged representative. He's been the lead sponsor on 11 bills, including H.R. 15, the House version of comprehensive immigration reform, and he boasts of his leadership on important local initiatives like controlling flood insurance rates and Everglades restoration. But he has also missed 34 votes, the seventh highest among 76 House freshmen, and, with the exception of one bill renaming a post office, none of the bills Garcia introduced as lead sponsor has actually made it out of the hostile House.

"I think he's done a credible job as a first-term member of the House," says Bill Leogrande, an American University professor and congressional expert.

In August, Garcia took to the House floor to defend his immigration bill. Ted Cruz, the Texas Republican senator and a fellow Cuban-American, had strongly opposed the reform, and in Garcia's rebuttal he launched into one of the year's most fiery political displays. "And to think, Mr. Speaker," Garcia began, his voice rising, "that a fellow Cuban-American sits in the other house, dictating to this house that we should strip away rights! Strip away rights from children! It's unacceptable! It's un-American!"

previous
next
KEEP NEW TIMES BROWARD-PALM BEACH FREE... Since we started New Times Broward-Palm Beach, it has been defined as the free, independent voice of South Florida, and we'd like to keep it that way. With local media under siege, it's more important than ever for us to rally support behind funding our local journalism. You can help by participating in our "I Support" program, allowing us to keep offering readers access to our incisive coverage of local news, food and culture with no paywalls.
Make a one-time donation today for as little as $1. 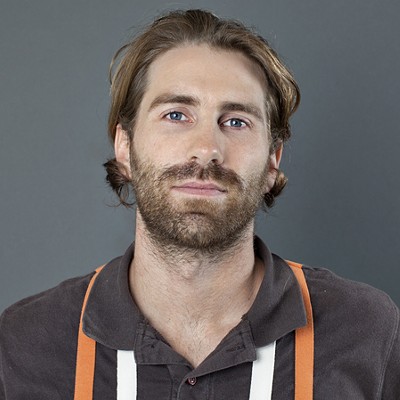