Loot Games & Comics in Coral Springs recently closed. Its sign made reference to The Hitchhiker’s Guide to the Galaxy. Photo by Dan Evans
In a Coral Springs strip mall, Loot Comics & Games sits wedged next to a bakery, a barber, and a pain clinic specializing in back and neck issues.

Or, rather, it sat there: The shop closed for good November 22 after a three-and-a-half-year run. A hastily drawn sign on the door reads, “So long and thanks for all the fish,” a reference to the fourth book in The Hitchhiker’s Guide to the Galaxy trilogy.

The Saturday after shuttering, owner Alex Nykolaiszyn worked inside the shop. He packed up displays while shooing away the occasional vulture looking for a deep discount on a Dungeons & Dragons guide or leftover 20-sided dice.

Nykolaiszyn, whose day job is a business intelligence analyst, says the closure was due to “a series of unfortunate events,” though the reasons were far more prosaic than an evil Count Olaf pulling the strings. Instead, it came down to the theft of a trailer filled with merchandise, a rent increase, and the kitchen staff quitting en masse — all within the past three months.

Complicating matters, Nykolaiszyn and his family moved to California about two years ago to get better care for his two children, both of whom have autism. Ironically, he found a new job and is moving back to South Florida because his now-former company stopped paying his kids’ medical bills. The $8,000-a-month cost for the therapy added to the overall pressure.

Putting aside whether opening a comic book store as a side gig more than 3,000 miles from your home is an insane idea, the fate of Loot is similar to that of at least one other shop in South Florida — Silver Dragon Tavern & Games in Kendall, which also closed recently. This, owners say, despite the fact that tabletop games such as D&D are exploding in popularity. Comic book shops in recent years have been closing at a rapid clip across the nation. Nykolaiszyn said he knows of ten that have shuttered within the past month, and a simple Google search pulls up pages of news posts reporting the demise of beloved gaming spots.

“You used to get beat up on the playground for playing D&D. Now you have actors and athletes that play,” he says, adding that players such as Vin Diesel and Joe Manganiello have normalized the pastime.

According to Wizards of the Coast, the company that produces the various books and ephemera vital to D&D, more than 40 million people worldwide play. Though the cliché is of nerdy middle-school boys playing in the basement — à la Stranger Things — 38 percent are women.

Players say they want the IRL community unavailable in online massive multiplayer games (MMG) — such as Fortnight — and enjoy creating entire worlds with little more than their minds. 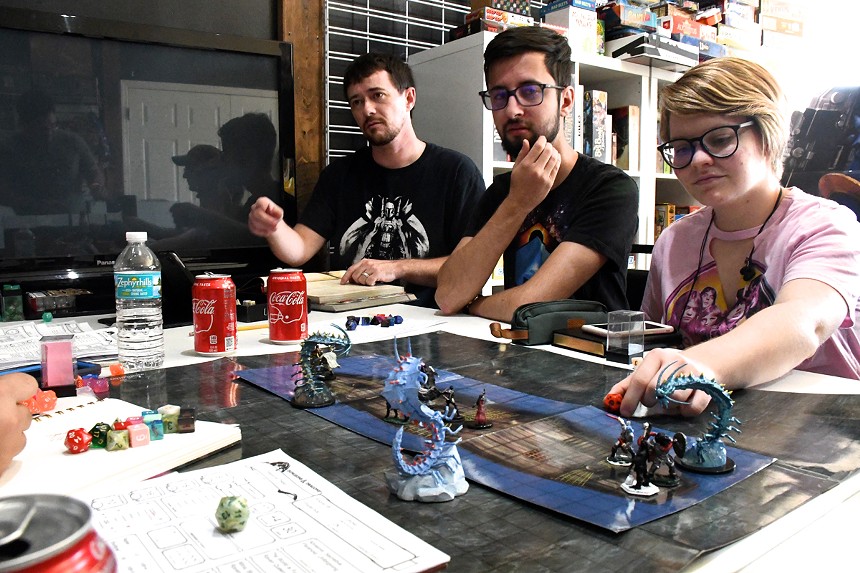 Walter Irvine (left), Peter Kamenkovich, and Natalie Foertter were among the D&D players at a recent Loot Comics get-together before it shuttered.
Photo by Dan Evans
Peter Kamenkovich, age 23, says he doesn’t think there’s a lot of crossover between D&D and MMG players, and despite his age, his guess is D&D appeals mostly to an older demographic.

“Not that there aren’t outliers, but D&D has a patience and concentration aspect to it that even I have trouble keeping focus with — for example, getting distracted with my phone between turns," the Boca Raton resident and Loot regular says. "In this day and age of instant gratification, if a child is raised on it, I think they'd find D&D a little boring and slow.”

As for why stores might be closing, Kamenkovich says it might be because public games tend to be somewhat rowdy, loud affairs and not always the best places to follow complicated tales.

“Sessions last up to five hours and essentially it's a story that you need to listen to and pay attention, while also having a bit of fun and laughs along the way,” he says. “That's why I think games are moving more towards online and private, in-house, play.”

For his part, Nykolaiszyn says that once players get the guides and maps – which, he noted with a touch of bitterness, can be found online for nearly half of what most shops retail them for – they don’t need to buy them again.

“The industry is growing, but the retailers can’t keep up,” he says, “unless you do community-based stuff.”

Another player, Walter Irvine, 35, noted the impact of Amazon on the businesses, saying “selling something in a physical store isn’t a great idea anymore.”

“I live in West Palm Beach and there’s local game store that isn’t going anywhere,” he says. “They have a huge store that sells every nerd thing you can imagine. But they aren’t going to be millionaires either. Brick-and-mortar is just super risky.”

Nykolaiszyn says his business plan was to create a bar and cafe where people just happened to play D&D. If he sold a few comic books and a number of miniatures – the often elaborately painted figurines players use to represent their characters – so be it, but that wasn’t the point.

On a Sunday afternoon two weeks before the close, three separate D&D games were going on in the packed store. In a last-minute effort to keep afloat, Nykolaiszyn had abandoned half of the retail space. Since the cooks had quit, the only food available was a few bags of chips and various candies. Beverages were limited to a few soft drinks and craft beers served by a morose employee and fetched from what looked like a staff fridge.

The players ranged in age from high schoolers to medical doctors in their 50s. They were black, white, and Hispanic, a fair set of the races, cultures, and the various demographics that make up South Florida. Though most were men, about a third were women.

Mika Bridges, 25, said people use D&D to get away from the daily grind, creating new personas and characters in the “fantastical world of dragons and magic.

“I’ve created a bunch of characters just sitting in a drawer,” says Bridges, who works as a freelance photographer. “By coming here, I can make them alive.”

At the table closest to the door, Dungeon Master John Sanchez led a group of six players on a quest for the Elf Blade in a game titled “Echoes of the Weeping War.” As he set the scene, which began in a harbor town, Sanchez played seagull cries from his smartphone. Later on, the soundtrack would switch to ocean sounds as the motley crew of elves, half-dragons, and rogues moved to a ship, as well as more intense music as they moved closer to the prize.

The group was playing an Adventure League game, which standardizes play and allows strangers to play one another without worrying whether that Moon Elf to your left, whose occupation is that of a Blade Slinger, really has the experience points to cast that Arcane Eye spell by rolling better than a 15 on the D20.

Seriously. The phrases the players use sound more akin to a foreign language until you get an idea of what they’re talking about. To translate the above: players have a character, which can be one or more of a vast variety of humanoids, animal hybrids, elves, dragonborns, etc. All characters have an occupation, such as a Blade Slinger, which is a type of wizard. A wizard can cast the Arcane Eye spell – which allows a player to see, via magic, things that are hidden– but it is a Level 4 spell.

This, in turn, means the character has to have been involved in number of games and earned enough points for doing well along the way to be allowed to use it. But even if all of the above is true, for the spell to work, the player has to roll a die – the 20-sider being the most iconic – above a certain number. That specific number is based on the different strengths, weaknesses, and other attributes of the character based, yup, on level and experience points. Simple!

And just like life, there’s a certain amount of luck and randomness built it.

Nykolaiszyn says he’s not sure about his next steps yet, though he may still do conventions and parties. More than anything, he said, he needs a break.

Bridges, for her part, isn’t worried D&D folks will run out of places to play.

Like Tate’s Comics in Fort Lauderdale or Past Present Future Comics in Davie, she says, Loot built a community. To her way of thinking, it was the theft of the trailer that took them down.

“Nerd culture is vast and ever growing,” she says. “Board game shops that couple as cafes or hangouts do much better.”
KEEP NEW TIMES BROWARD-PALM BEACH FREE... Since we started New Times Broward-Palm Beach, it has been defined as the free, independent voice of South Florida, and we'd like to keep it that way. With local media under siege, it's more important than ever for us to rally support behind funding our local journalism. You can help by participating in our "I Support" program, allowing us to keep offering readers access to our incisive coverage of local news, food and culture with no paywalls.
Make a one-time donation today for as little as $1.