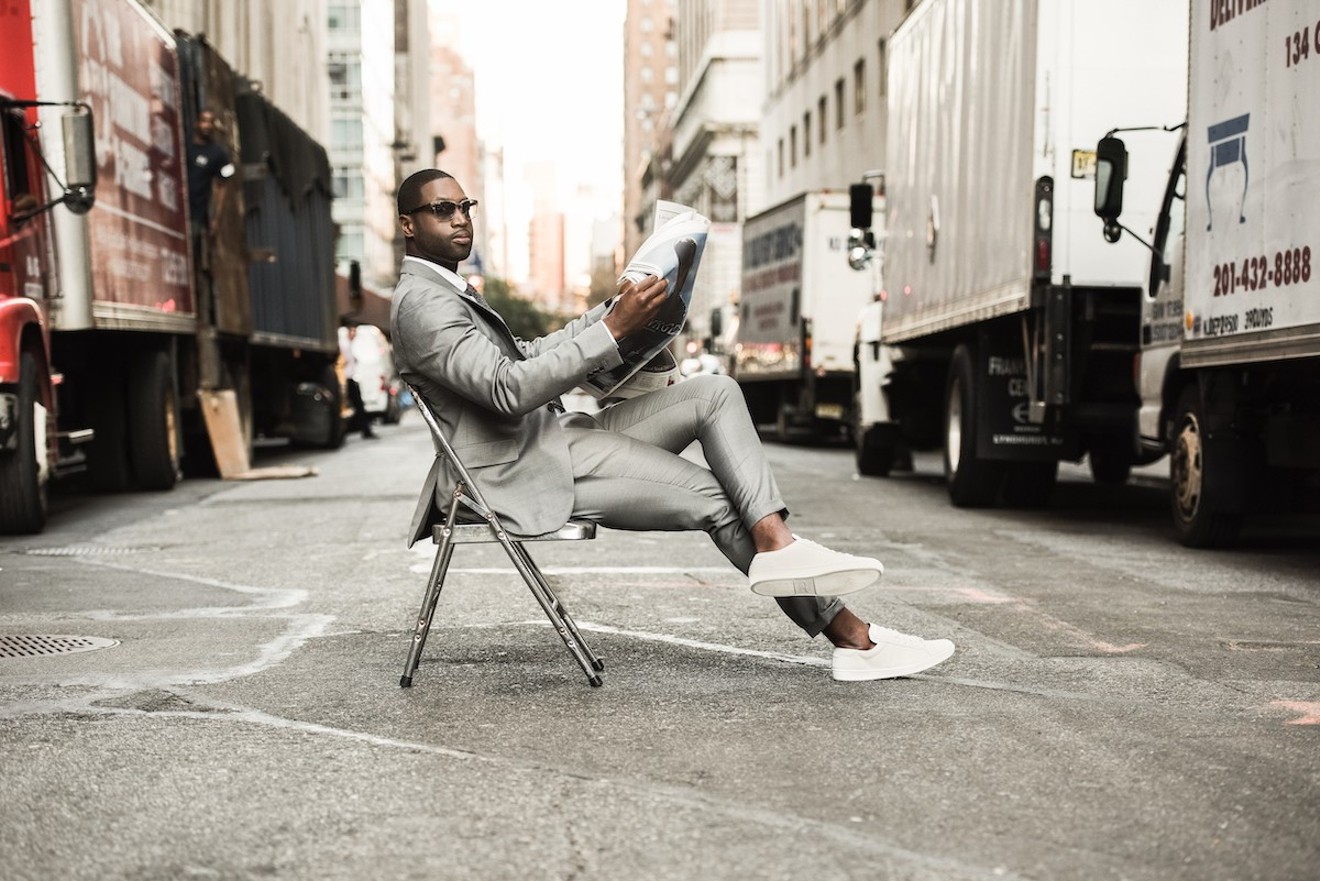 As much as Miami knows about Dwyane Wade, there was — and is — so much more to the man. Courtesy of ESPN Films/Imagine Documentaries
"That's it," Dwyane Wade exhaustingly mutters into the camera April 11, 2019, exactly one sleep after putting the exclamation point on his legendary and illustrious 16-year NBA career with a triple-double on the road in New Jersey. "I can't believe it's over. I'm so fucking thankful, though."

That ending is the beginning of the new film D. Wade: Life Unexpected, a feature documentary from ESPN Films and Imagine Documentaries that will debut Sunday, February 23, at 9 p.m. on ESPN. The 90-minute-plus trip down memory lane begins with an emotional Wade, realizing his career is over as he lies in bed, and rewinds to his upbringing and what led him to that reality. By the end of the film, Heat fans will feel as if they've been invited inside the head of Miami's most beloved sports star as his life flashes before his eyes. Life-changing moments are strung together so effortlessly, documented so meaningfully and thoroughly, that it almost seems as if every memory were part of a script, every twist and turn planned in advance.

That, in a nutshell, is what makes Wade's first 38 years so incredible and his time in Miami so legendary. Nothing ever went according to plan, but everything, in the end, had a purpose. Throughout the film, it's clear even Wade can't believe it.

"I look at my life like it's someone else's story," Wade tells his longtime friend Bob Metelus, a cinematographer who has followed him for the past ten years, documenting every moment from the beginning of the Big Three free-agency frenzy to the present day. "There are so many parts of my life when I hear my sister or my cousins or I hear my brothers or someone talks about our life, I'm like, 'Oh my God, yes. That did happen!'" 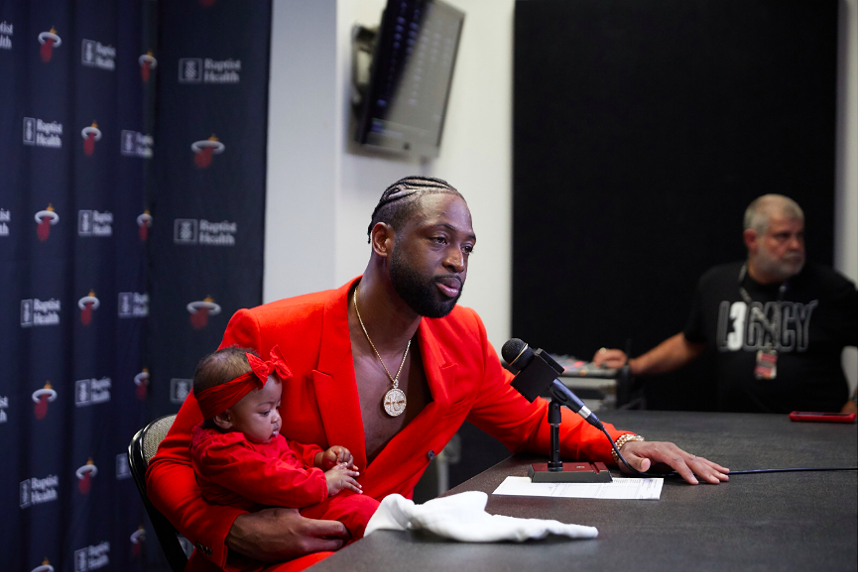 Courtesy of ESPN Films/Imagine Documentaries
The film includes clips from hundreds of hours of never-before-seen home movies, exclusive video diaries, and all-access verité footage shot over the past decade, making it feel less like a cinematic experience and more like a celebration of a rags-to-riches — and, more important, a loving and purposeful — life.


Throughout the documentary, Wade describes his memory of police bursting through the front door of his childhood home, finding him hiding under a bed, and putting a "silver gun he'll never forget" to the back of his head as they asked the whereabouts of his drug-addicted mother. He remembers the time his sister got on a bus with him, dropped him off at his father's house, and never came back, leaving him in the company of just a few children and his first introduction to a basketball hoop. And, of course, there's the climax of his illustrious NBA career. D. Wade: Life Unexpected is a butterfly-in-the-stomach journey that will leave viewers wishing there were an entire season, not just one episode.

Miami has had a front-row seat to the Dwyane Wade Show since the team drafted him fifth overall in the legendary 2003 NBA draft. Heat fans likely believe they already know everything there is to know about the franchise's greatest star, from his early days as a fresh-faced kid from Marquette University with a baby on his lap at the draft to his later achievements of three championships, an NBA Finals MVP award, and 13 All-Star appearances. 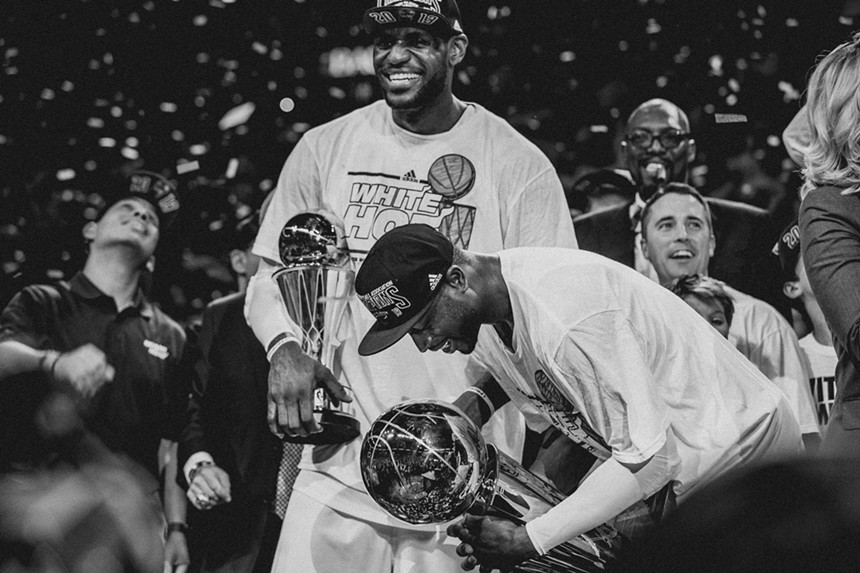 Courtesy of ESPN Films/Imagine Documentaries
Turns out, as much as Miami has always known about Wade, there was — and is — so much more to the man. From playing some of his best basketball in games with the Heat and then taking late-night flights to Chicago for custody battles with his ex-wife, to the intimate details of the moments that led to Wade's teaming up with LeBron James and Chris Bosh in free agency in 2010, to his struggle to conceive a child with wife Gabrielle Union, there is no shortage of new details to take from the film.

"I'm excited to share a side of myself with the world that not many people may know," Wade says in promotional materials for the film. "This deeply personal documentary will give fans a never-before-seen look not only at the behind-the-scenes of my 16-year career in the NBA but will peel back the curtain on my personal life — the highs, the lows, and everything in between — showing how I created my own path to get to where I am today."

Though much of the documentary focuses on the real-life issues stemming from Wade's personal struggles to the surge in police-related shootings of African-Americans, there are many lighthearted moments that will tickle fans. Heat forward and longtime teammate Udonis Haslem, who makes a cameo in the film, at one point talks about how he and Wade did everything together when the two came into the league together, even going to the dentist at the same time. As UD puts it, Wade had a "mouthful of cavities" that had Haslem waiting for hours to go home after he was done with his own appointment. Wade also hilariously describes how Shaquille O'Neal came to his house after being traded to Miami, looked around, and said, "Nah, Flash. You gotta move."

You'll laugh and you'll cry. You need to watch this incredible film Sunday night to fully appreciate who Dwyane Wade the man is and how far he has come.

D. Wade: Life Unexpected. Premieres Sunday, February 23, at 9 p.m. on ESPN.
KEEP NEW TIMES BROWARD-PALM BEACH FREE... Since we started New Times Broward-Palm Beach, it has been defined as the free, independent voice of South Florida, and we'd like to keep it that way. With local media under siege, it's more important than ever for us to rally support behind funding our local journalism. You can help by participating in our "I Support" program, allowing us to keep offering readers access to our incisive coverage of local news, food and culture with no paywalls.
Make a one-time donation today for as little as $1.