Photo by George Martinez
The Miami Dolphins surprisingly successful season died in a fiery crash in Pittsburgh last Sunday. There were no reported survivors. Investigators have concluded the cause of the accident was human error — lots and lots of human error. In lieu of flowers, the Dolphins ask that you send your season ticket renewal forms in extraearly this year.

Just because the Dolphins' season is dead, though, doesn't mean we can't gather around and fondly remember the good times. It doesn't mean the season wasn't a huge success, considering the 1-4 start, a plague of injuries, and a first-year head coach.

And it definitely doesn't mean we can't look forward to next season with excitement. In fact, let's do just that. Quit feeling bad about the loss and think about why next season will be even better.

Photo by George Martinez
1. A full season of the Jay Train

Coming into this season, it seemed as if Jay Ajayi would be the Dolphins' starting running back by default: They attempted to re-sign Lamar Miller before he signed for more money with the Houston Texans, and they actually did sign Denver Broncos running back C.J. Anderson before the offer sheet was matched. Then, just when it looked like Ajayi would enter the season as the sure-fire starter, the Fins added veteran Arian Foster.

As we all know, Foster didn't work out so well, and what followed back-to-back 200-yard rushing games in mid-October that had Dolphins fans wondering where the reincarnation of Ricky Williams came from. Ajayi finished with 1,272 yards and as Pro Football Focus' highest-rated running back in the whole league.


The Dolphins know they have a workhorse running back. Now it's just about figuring out how to use him.

Photo by Michele Eve Sandberg
2. The Dolphins have an entire offseason to improve their defense

The Dolphins defense was not pretty this season. Any way you slice it, they were just flat-out bad. Now the Dolphins and general manager Mike Tannenbaum can sit back, assess the damage, and decide where their resources are best spent to make a weak link less of a liability. What the Dolphins do know is that they have a pair of cornerbacks they can rely on; a safety in Rashad Jones, who will be back healthy and for a new contract; and plenty of pieces on the defensive line to work with.

In addition to all of those assets, the Fins will have cash to spend. Mario and his $10 million will be gone, freeing up more cap space to find someone who sucks less and tries more. (That's not too hard.)

When Ryan Tannehill went down with a knee injury a few weeks ago, the worst part about his potential ACL tear was that he would be sidelined all offseason, thus missing valuable training time. But Tannehill's recovery has gone much quicker than initially thought, and now he can spend the offseason working with Gase. Whether he is training by himself, lofting bombs to Jarvis Landry, or just throwing to his son Steel in the backyard, Tannehill will find ways to get better this offseason.

He'll use this summer to plot his revenge and undo the unjust breaks this season dealt him.

Photo by George Martinez
4. The Dolphins flipped the narrative in 2016

This point won't matter if the Dolphins come out and immediately shit the bed in 2017, but for now, they're no longer a laughingstock of the NFL. Miami was a Heat town for the past decade-plus. Wearing Dolphins gear seemed almost like a dress code rather than a sign of pride. Heat gear was the go-to merch to buy on your own, while Dolphins gear is what you got from your mom for Christmas.

Not anymore. The Dolphins are no longer a joke, and many experts are calling them a team to watch because Gase is such an up-and-coming coach. Think how awesome it will feel entering next season expecting the Dolphins to compete on a weekly basis rather than planning to watch them fail. 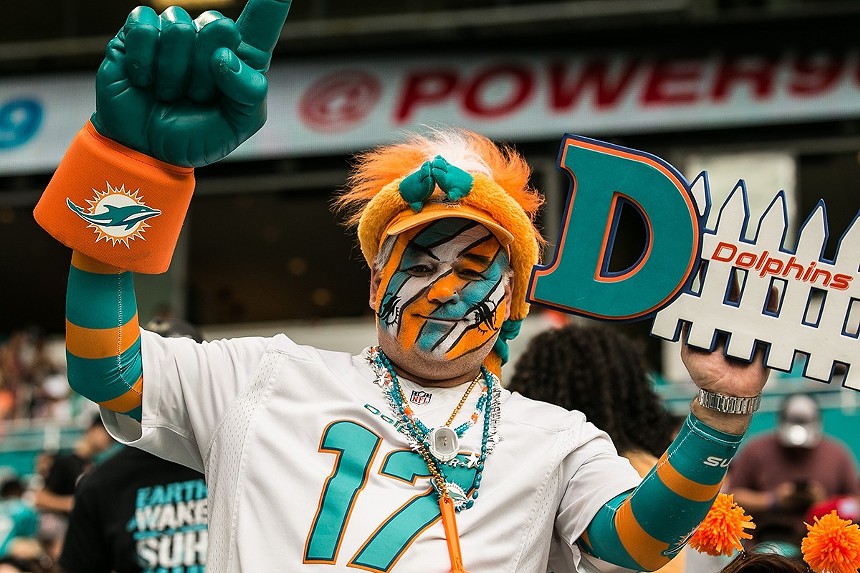 Photo by George Martinez
5. You can trust Adam Gase

Finally, someone who gets it is running the show in Miami Gardens. The Dolphins hired the youngest coach in the NFL last offseason hoping the man who once made Tim Tebow could come in and use Tannehill's obvious talent in a fashion that made him live up to the hype, make players more accountable, and possibly win some damn football games. Gase checked all the boxes and then some.

Tannehill thrived under Gase's coaching and played with the sort of confidence we hadn't seen from him. The Dolphins' locker room wasn't a disaster — it was a strength, coalescing to overcome a tough start that had everyone counting the team out. Gase led an injury-riddled roster to ten wins and a wildcard berth. He did it all with very little, and it should make fans' mouths water at the mere thought of what meal he might cook after Tannenbaum gives him some better groceries.

Dolphins fans have a lot to be excited about heading into next season. It's been a long time since that was the case.